Sign Up
Log In
Purchase a Subscription
You are the owner of this article.
Edit Article Add New Article
You have permission to edit this article.
Edit
Home
News
Sports
Obituaries
Opinion
Arts & Life
Calendar
Photo and Video
Ads
eEdition
More
Share This
1 of 9 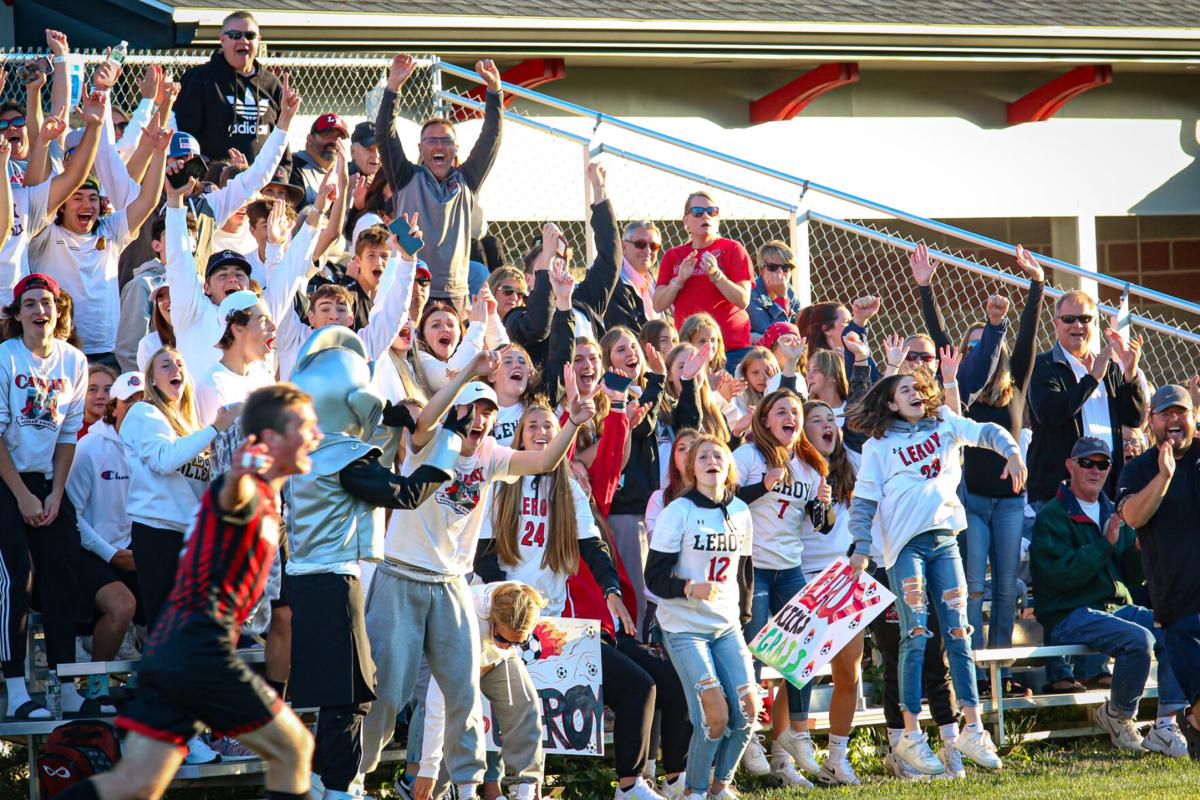 Courtesy LeRoy_Knights on Twitter The Cavalry has been one of the top student sections throughout the area this fall season. 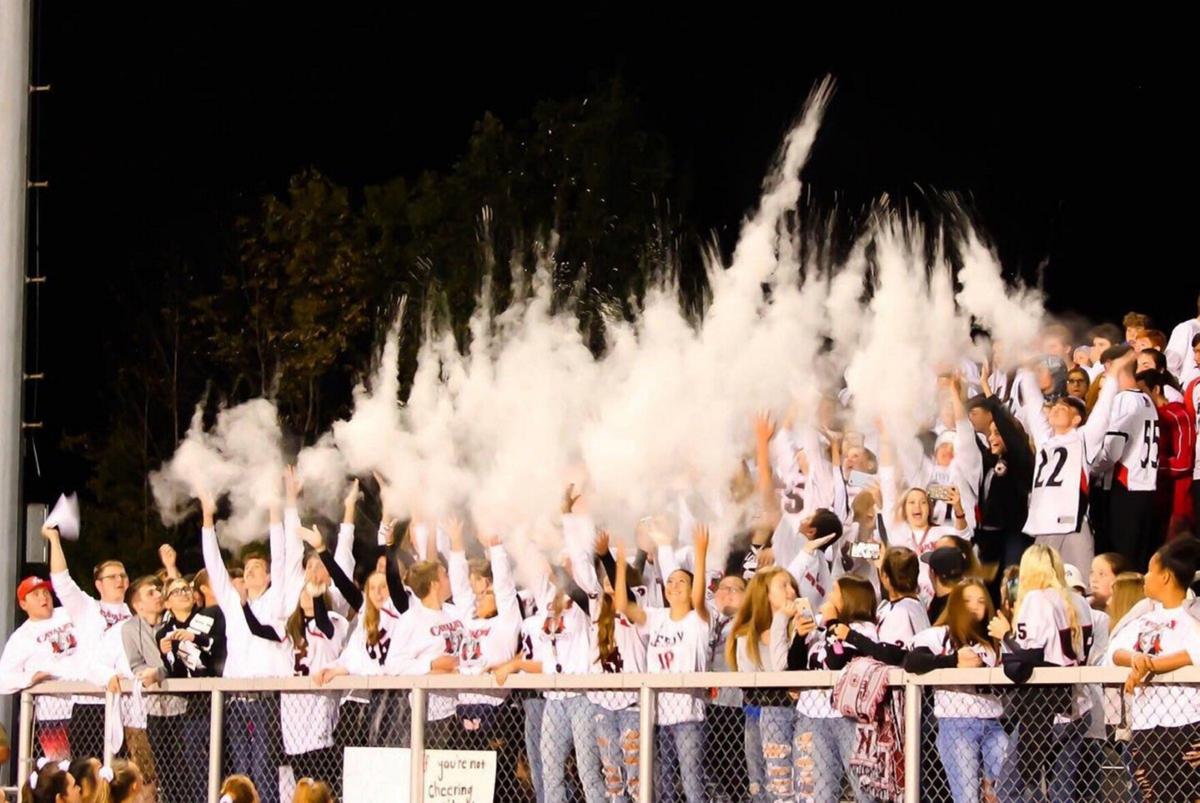 Photo credit: LeRoy_Knights on Twitter | The Cavalry tosses powder into the air during a Knights’ contest during the 2019 season. 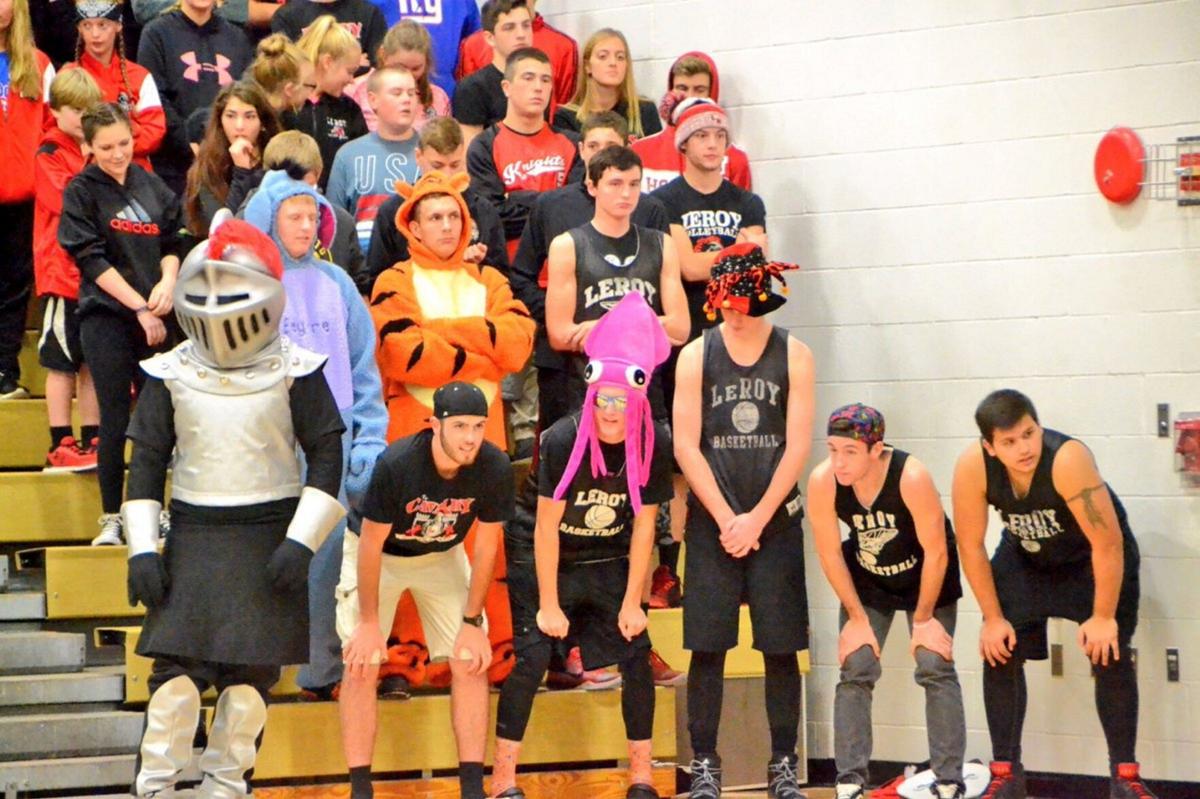 Photo credit: LeRoy_Knights on Twitter The Cavalry was created in 2016. 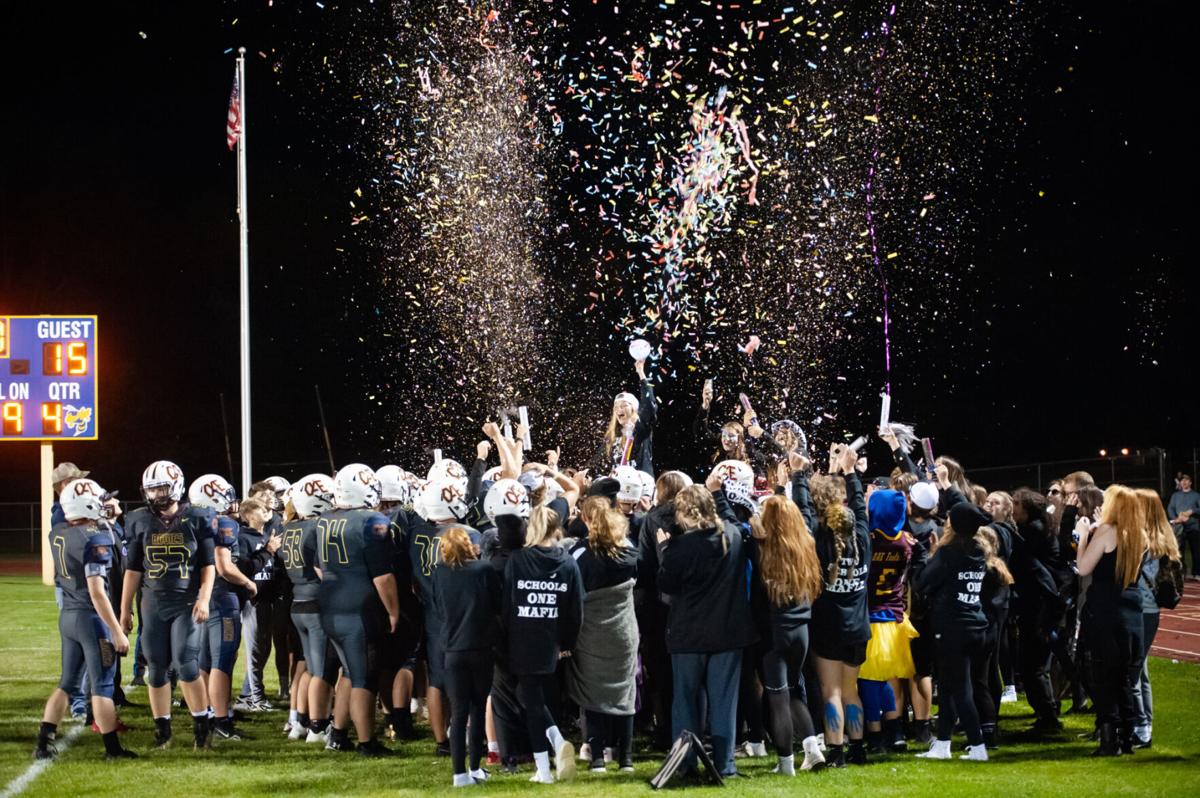 Kristin Smith/For The Daily News The OAE Mafia celebrates with its team after a win. 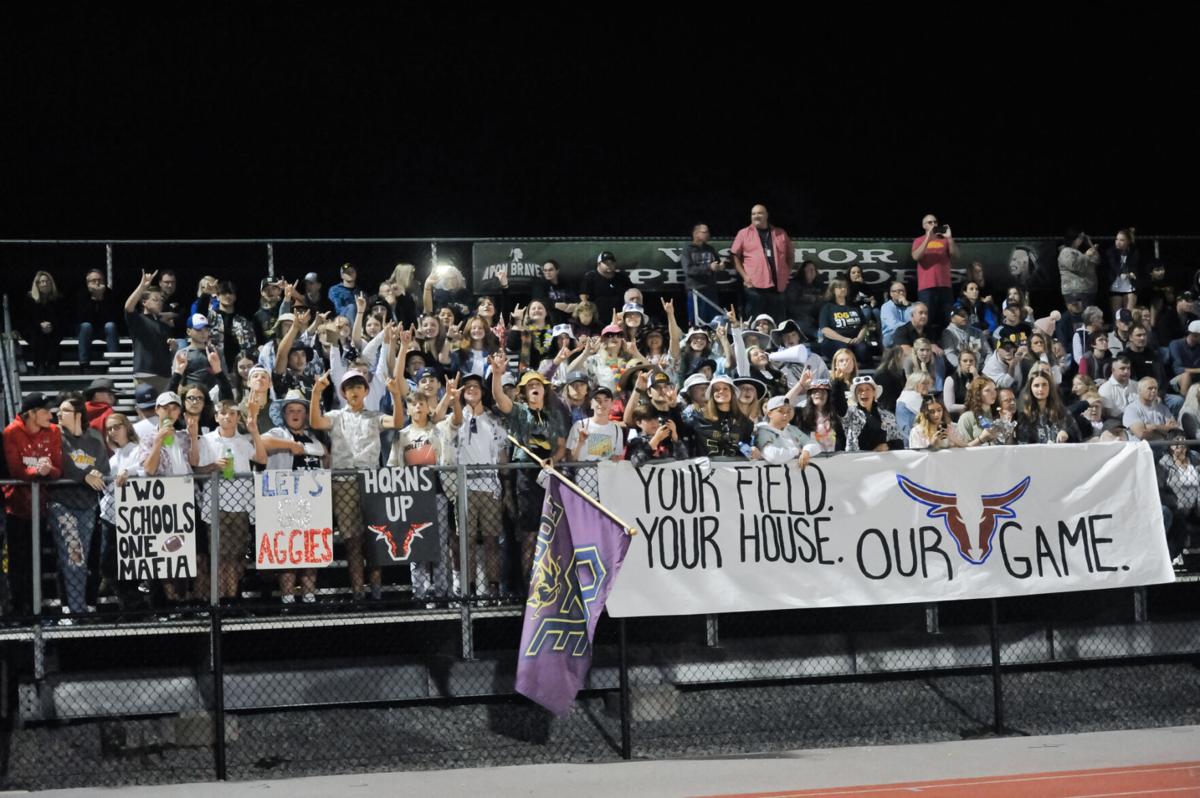 Kristin Smith/For The Daily News The OAE Mafia showed up in droves at the Aggies’ recent road game in Avon. 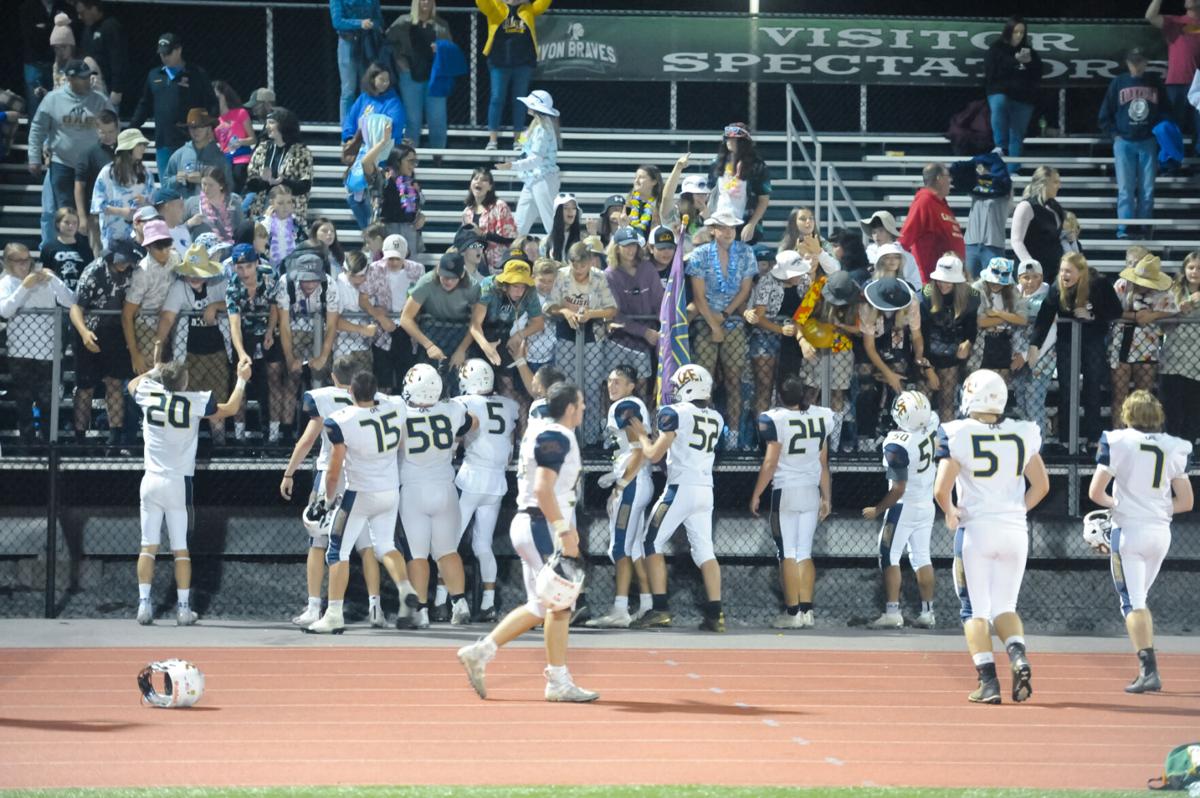 Kristin Smith/For The Daily News | The OAE Mafia celebrates with its team after a win. 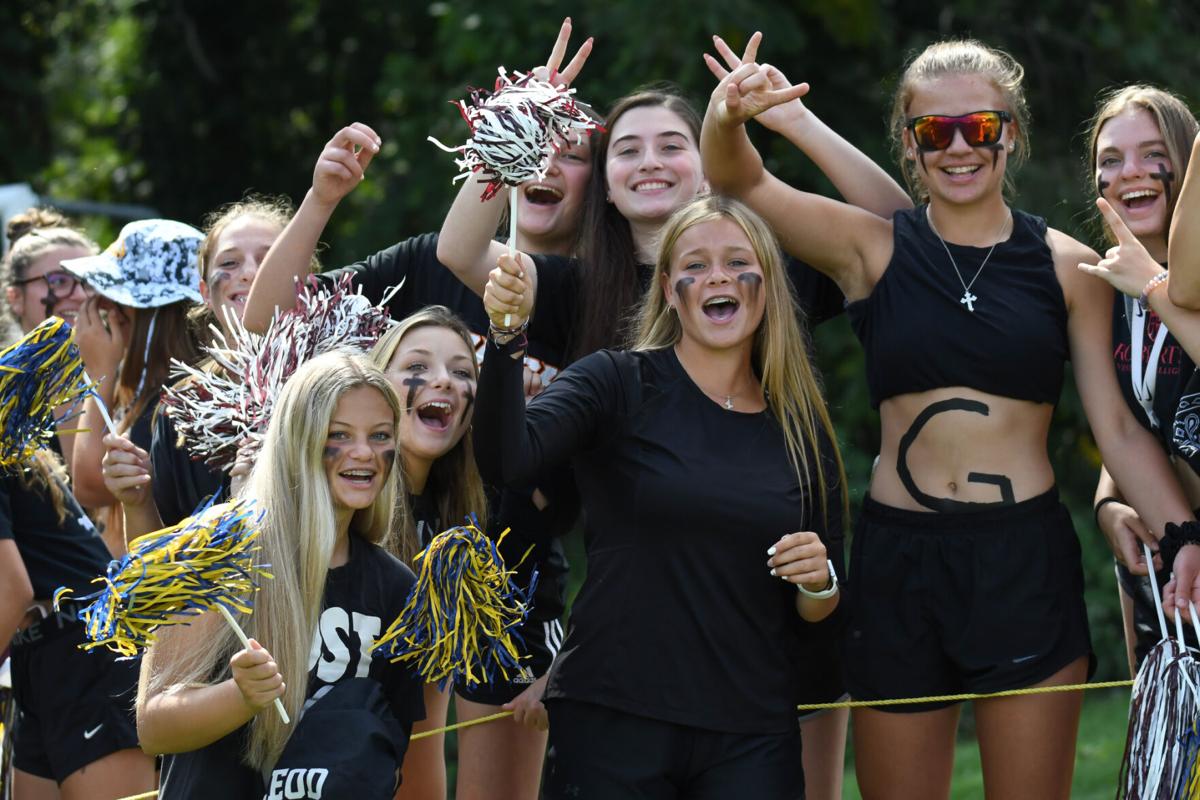 Doug McFarland/For The Daily News | The ‘O-A/E Mafia’ showed up in bunches to watch their Aggies defeat rival Notre Dame earlier this season. 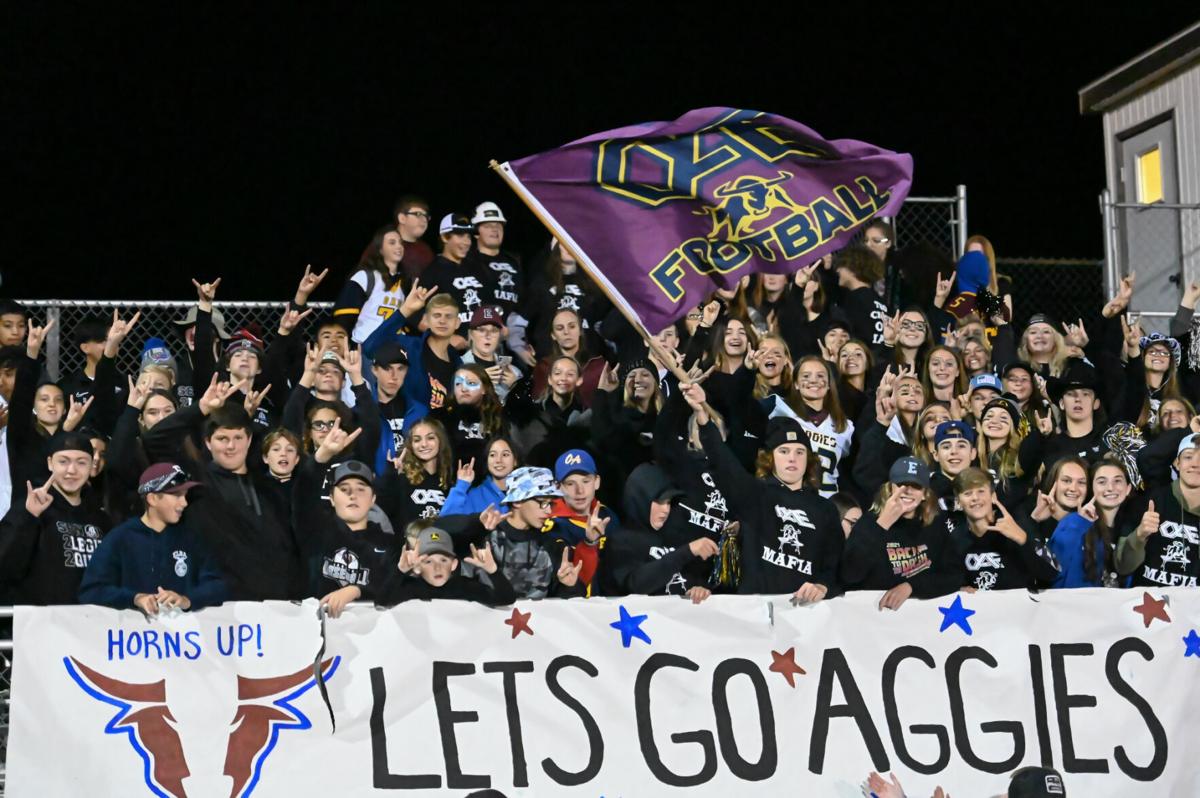 Doug McFarland/For The Daily News | The OAE Mafia has been lit this season. 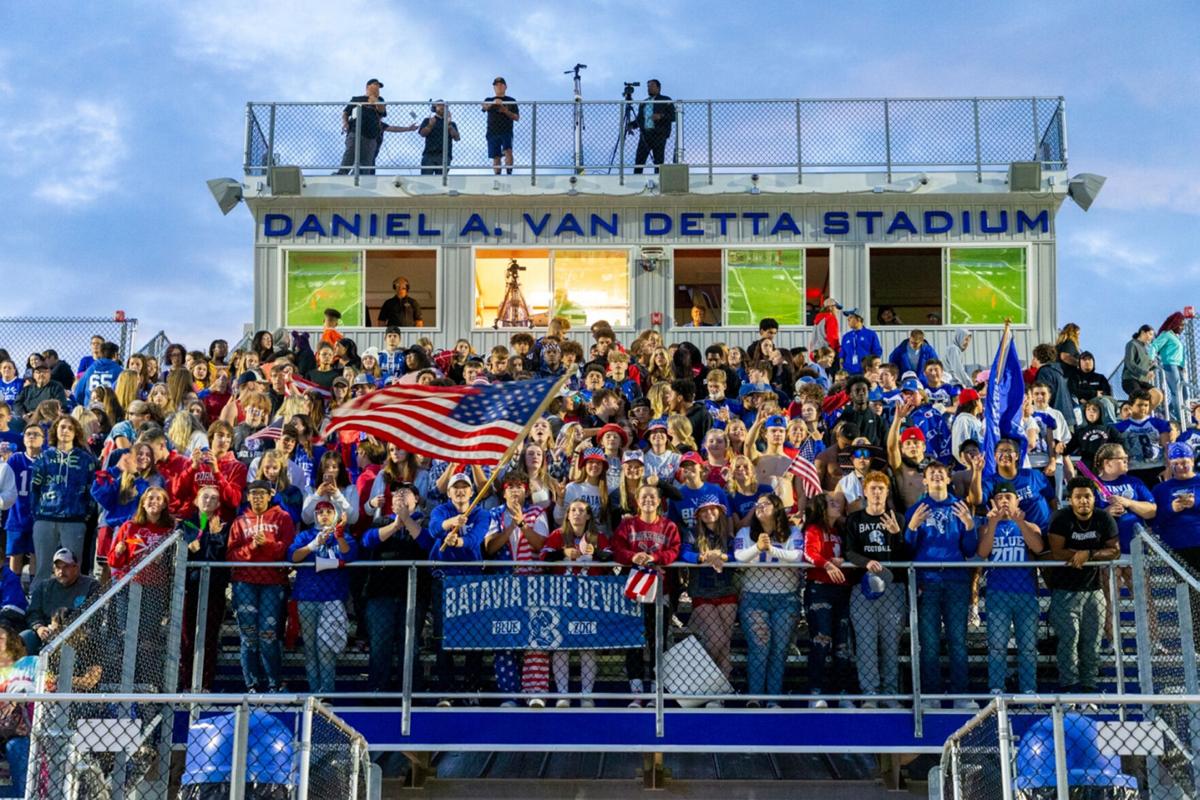 Courtesy LeRoy_Knights on Twitter The Cavalry has been one of the top student sections throughout the area this fall season.

Photo credit: LeRoy_Knights on Twitter | The Cavalry tosses powder into the air during a Knights’ contest during the 2019 season.

Photo credit: LeRoy_Knights on Twitter The Cavalry was created in 2016.

Kristin Smith/For The Daily News The OAE Mafia celebrates with its team after a win.

Kristin Smith/For The Daily News The OAE Mafia showed up in droves at the Aggies’ recent road game in Avon.

Kristin Smith/For The Daily News | The OAE Mafia celebrates with its team after a win.

Doug McFarland/For The Daily News | The ‘O-A/E Mafia’ showed up in bunches to watch their Aggies defeat rival Notre Dame earlier this season.

Doug McFarland/For The Daily News | The OAE Mafia has been lit this season.

When high school sports returned to the field, court, ice, track and otherwise this past school year, it was like a weight had been lifted off the shoulders of players, parents and coaches everywhere.

After months without athletic competition, suddenly, playing surfaces throughout Section V were jam-packed with scholastic sports action for four straight months. With the return of athletics came the return of smiles to athletes’ faces and laughter emanating from socially distanced grandstands as families came together, albeit in a limited fashion, to watch their children, grandchildren and siblings return to the activities to which they had dedicated so much time over the years.

But even with all of the positives that the return of HS sports brought with it last season, there was something still missing.

For much of the pandemic-ravaged 2020 HS season, teams were allowed just two spectator passes per athlete and many school districts chose to limit those passes to home fans only. This left friends and classmates out in the cold and removed the presence of student sections that have become such an integral part of the HS sports experience.

Fast forward a few months later to the 2021 high school campaign, and with the impact of the pandemic somewhat subsiding, full capacity crowds have been permitted to return to stadiums, gymnasiums and arenas across the region. With the return of massive crowds has come the student sections, which have not only made a triumphant return, but done so with a vengeance.

In Le Roy, The Cavalry, created in 2016, has taken its support of Knights’ athletics to an incredible level this fall season.

Spearheaded by seniors Brady Fix, Riley Wood and Adam Risewick, the Knights’ student section has made its presence felt at Le Roy home sporting events and has even hit the road on a few occasions. The Cavalry is as organized as they come, developing themes nightly for each game while providing their typical full-throated support of their various varsity teams.

This past Monday night was Senior Night for the Le Roy boys soccer team, and the theme for The Cavalry that night was “Sign Night.” Each member of the Knights’ student section brought a sign to either honor a senior or, in some cases, playfully taunt the opposing team. The creativity displayed in each sign was impressive enough, but what was even more stunning was the backstory of how “Sign Night” came to be.

While one would think it would take some time to get a sizeable section of 40-plus students on board with a given theme, in Le Roy, these things come together in the blink of an eye. With a game each night, sometimes, decisions on the different themes are made with short notice. On Monday at about 2 p.m., Fix, Wood, Risewick and their crew sent out the information regarding that night’s theme on the group’s Twitter and Instagram pages. By the 6:30 p.m. first kick at Hartwood Park, the Knights’ grandstand was filled with colorful creations.

It’s how locked-in The Cavalry is that makes it so impressive. In addition to the students’ efforts, Knights’ Media director, Rob Currin, has been a critical factor in the rise of the Le Roy student section.

Strollo also gave plenty of kudos to Fix, who has taken the lead regarding the Knights’ student section’s social media presence, @TheCavalryLR, on various channels.

“I look forward to these nights - it’s seven days a week at times,” added Fix. “These are the biggest memories and the biggest bonds that we are creating out here every night. You meet new people here. There are so many people that come to the games. It’s just great for everybody to be here.”

Fix shared the credit with his classmates, who he says have played an equal role in the section’s increasing presence. It takes a village, said the Knights’ senior.

“We have seven people involved in Knights Media,” said Fix. “They all do a great job upgrading our media at Le Roy.”

The Cavalry’s history may be a short one, but it’s been an impressive five-year run. It all began during the ‘15-’16 school year when LRHS principal Tim McArdle scheduled a meeting between the Knights’ senior leadership group and the Webster Schroeder High School ‘Warrior Crew,’ which had won the previous year’s NYSPHSAA Battle of the Fans. During the visit with the Webster student section, the then-leaders of The Cavalry, Le Roy seniors Reece Tresco and David Privatera, saw what it took to manufacture a significant level of school pride.

That meeting set the stage for years to come, precisely what you see this year, which is The Cavalry in all its glory.

“We’re friends with all of these guys and girls,” said Strollo. “That kind of personal connection kind of carries things. You can see it. It’s kinda cool.”

Elsewhere, in Aggie Land, the Oakfield-Alabama/Elba student section, known as the OAE Mafia, has taken the Genesee Region by storm as its football team has run roughshod through its Class D regular season schedule.

While its presence has primarily been limited to Aggies football games, the OAE Mafia has brought back the old days of high school student sections, where healthy unruliness, intensity and hilarity ruled the day. When you see the O-A/E student section at work, be sure to be on the lookout for shrapnel resulting from the destruction of folding tables and also, earplugs are recommended if you don’t have a sense of humor. Lastly, when you’re playing O-A/E, find your seat early because its student section runs deep — even on the road.

“This year, when we were finally allowed back into the games, I’ve never seen a student section that big and that crazy,” said Oakfield-Alabama junior Colton Yasses, one of the leaders of the OAE Mafia. “It was amazing to see all those people come together.”

Joining Yasses in his leadership of the OAE Mafia are Elba seniors Lindsay Augello and Adrianna Long. For the two Lancers, it’s been exciting to come together with students of a different school and watch the OAE Mafia grow exponentially this season.

“We don’t see each other every day, so when we come together for games and stuff, we always plan ahead of time,” said Augello about working with another school to create a fierce fan presence. “A few games, we’ve painted on our stomachs and stuff — we always try to have themes. It’s fun to talk with students from the different schools and figure out what we want to do to have fun that night.”

And when she mentions fun, she means it. It’s difficult to imagine a student section having more fun than the OAE Mafia. This past weekend, it showed up to Avon High School and overran Braves’ fans with its enthusiastic support of its Aggies.

“We were there, and we changed the game,” said Yasses about the Mafia’s presence at the O-A/E football team’s win over Avon. “Avon, they were upset. They were not having it. We changed that game and made it our home game.”

Augello went on to say how she and the other members of the O-A/E student section take an incredible amount of pride in the support they provide and the impact it has on their classmates on the field.

“I think when we match the team’s energy, it fuels them — it fuels us,” said the Elba senior. “It feels like we’re playing in the game.”

The story of the OAE Mafia’s inception is an interesting one, as the student section was formed between the two schools during the pandemic when students weren’t allowed inside the gates at stadiums across the state. District guidelines didn’t stop the O-A/E fans, which began flocking to O-A/E United girls soccer games last season. The OAE Mafia finally reached its complete evolution this year when the gates were reopened.

“We did our own little thing last year, and this year when we were finally able to get into games, we came together like never before,” said Yasses.

While The Cavalry and the OAE Mafia have splashed onto the scene this fall season, plenty of other local athletic programs have been backed by solid contingents of student support.

In Batavia, the Blue Zoo was established in the mid-2000s and is one of the area’s longest-standing student sections. The Zoo has withstood the test of time and, to this day, shows quality numbers at Blue Devils sporting events. One recent trademark of the Blue Zoo this season has been the use of air horns, which at times has been relentless.

“The Blue Zoo is the heartbeat of our home games,” said Batavia football coach Brennan Briggs. “There’s no greater experience than playing high school football under the lights on Friday night in front of all your classmates and schoolmates. It makes it extra special when the Zoo gets rowdy like they have at our home games this year. It’s a huge part of what high school sports are all about. “

From an athlete’s perspective, the rush one feels from a sizable student section calling one’s name can be significant.

Another long-standing student section, the Cal-Mum/Byron-Bergen Raider Regime, has been present this season in cheering on its team.

In the early stages of the ‘21-’22 high school sports season, it’s been a joy watching the return of capacity crowds, and more specifically, student sections across Section V.

A pandemic-stricken year not only changed the athletes and coaches — it also changed the fans. And thus far, during the 2021 season, perhaps that time away caused a change for the better, as we have seen these student sections take on new life this fall campaign.

You know what they say — absence makes the heart grow fonder. And that seems to have been the case with The Cavalry, OAE Mafia and other fan groups throughout the region that have stormed back after a year away