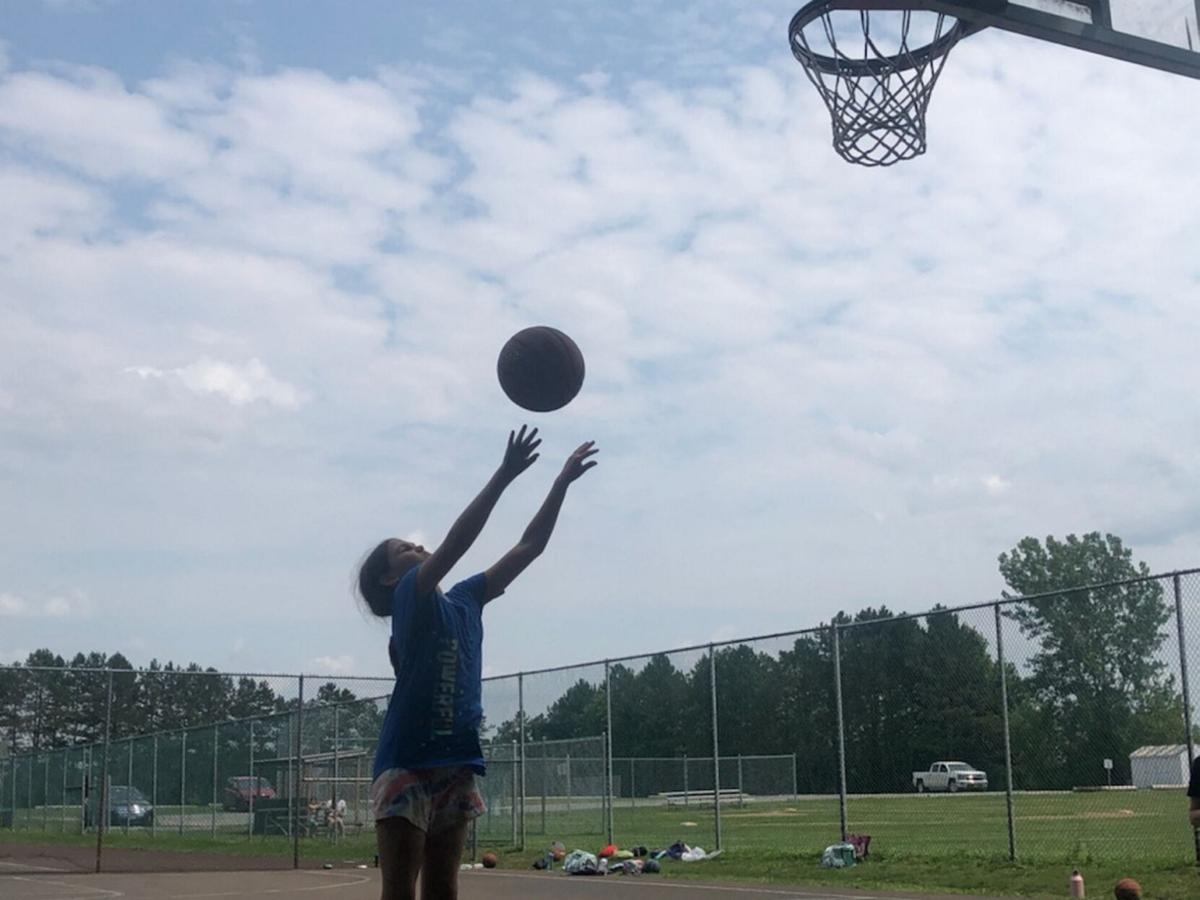 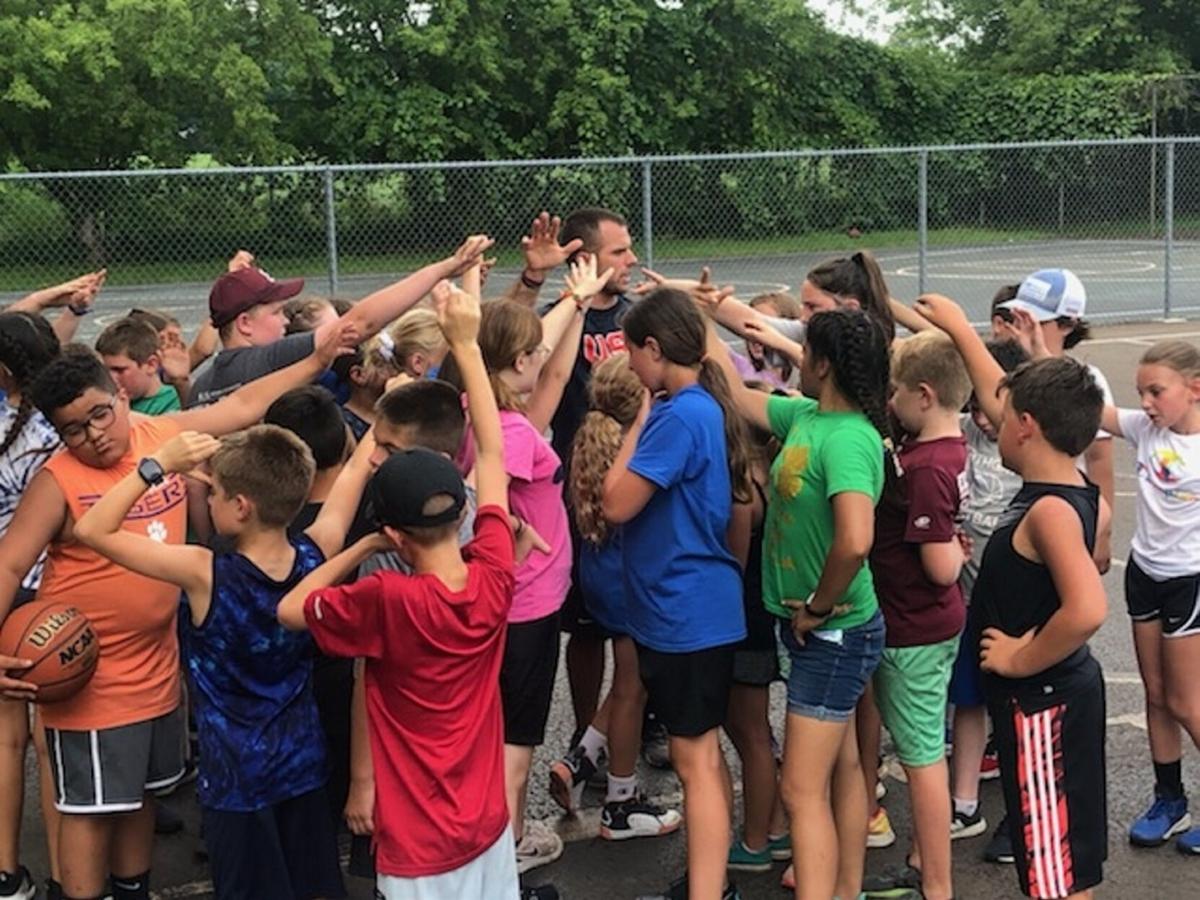 ELBA — It wasn’t basketball being played on a dirt court with wooden backboards and chain-link nets like out of ‘Hoosiers,’ but for Elba varsity boys basketball head coach Ciaci Zambito, last week’s annual Building Champions hoops camp wasn’t that far off either.

Because of renovations being done to the Elba High School gymnasium, Zambito was forced to move his camp for kids in grades one-through-six to the courts at Elba Town Park, complete with double iron rims and fading painted lines on the court. There was no scoreboard, no fancy shooting machines or hardwood floors, just kids with their basketballs. And that didn’t seem to bother anyone.

“I was little worried about numbers this year after having to take a year off last year because of the virus but we’re pushing over 80 kids between the two sessions,” Zambito said of his fifth camp since becoming the Lancers’ head coach. “It’s grades one through three in the morning, nine-noon, then grades four, five and six come back in the afternoon from 2-5. And we’ve really lucked out with the weather.

“That was one of the biggest things, trying to make sure we had good weather and we’ve lucked out,” he added. “It was looking a little iffy there at the beginning of the week but all the rain blew over.”

In the second session on Thursday, the campers worked primarily with dribbling and handling — including a competitive game of dribble knock-out, where each player tries to maintain their dribble while knocking the ball away from others — layups and passing drills, as well as a layup game of best to 10 between two teams.

For Zambito, the game all starts with the simple things with an emphasis on the fact that the game is fun.

“A lot of skill building and just making sure that they know that basketball is fun,” Zambito said about what is most important at the camp. “It’s the purest form of the game. As a varsity coach sometimes I get so wrapped up in the competition and strategy; these kids aren’t worried about winning league and sectional titles, they just want to make it to the next round of dribble knock-out. It’s good for me to be here with these kids and reminding myself that this is supposed to be a fun game.”

The success of the camp included not only near 90 campers, but campers from a number of school districts outside of Elba, which included Le Roy, Oakfield-Alabama, Byron-Bergen, Batavia and St. Joe’s in Batavia. However, without asking one would never know that most of the kids had just met each other earlier in the week.

The camp is run in a respectful nature where no one is treated any different than the person behind them. The boys are intermixed with the girls and all levels of talent are intertwined throughout the day.

“There’s a lot of talent out here, especially with the fourth, fifth and sixth grades,” Zambito said “We have six districts represented here and there’s going to be a lot of happy coaches over the next couple of years because there is a lot of kids out here that can play. But we’re really just trying to build their skills, a lot of ball-handling and making sure that they comfortable using both hands and stuff like that.”

Aside from one freshman helper, who had been at the camp here and there throughout the week, Zambito was running things by himself. With just a whistle and a speaker cranking the jams, the sectional-winning coach moved through drill after drill, paused with water and ice breaks on the mid-80s, humid afternoon.

It certainly isn’t as easy as he made it look.

“As your numbers grow it’s just that much more important to be organized, that’s the biggest thing,” Zambito said. “But the kids have been great. They come here knowing what to expect and what I expect from them and vice versa. It’s been a lot of fun. I’ve really enjoyed getting to know all the kids from different districts and I obviously have a relationship with all the Elba kids here already.”

Last season the varsity Lancers uncharacteristically struggled through an up-and-down season and were then forced to end their year prematurely after COVID-tracing shut them down after they played a team which had a player test positive.

However, though things for Elba — and every other team — have begun to get back to normal and the work for the winter has already begun, Zambito’s yearly camp has always been a way for him to get away from some of the stress that comes with the year-long job.

“Eleven months out of the year I’m so wrapped up with competition and getting better and in July it just brings me back to being their age and coming out here and being with your friends and having fun,” Zambito said. “I played on this court with all my buddies growing up. It just brings you back and it’s good for me to just take a step back and remember what it’s like to be their age and just find that pure love for the game.”