You are the owner of this article.
Edit Article Add New Article
You have permission to edit this article.
Edit
Home
COVID-19: Back open for business
News
Sports
Obituaries
Opinion
Arts & Life
Calendar
Photo and Video
Ads
More
Share This
1 of 9 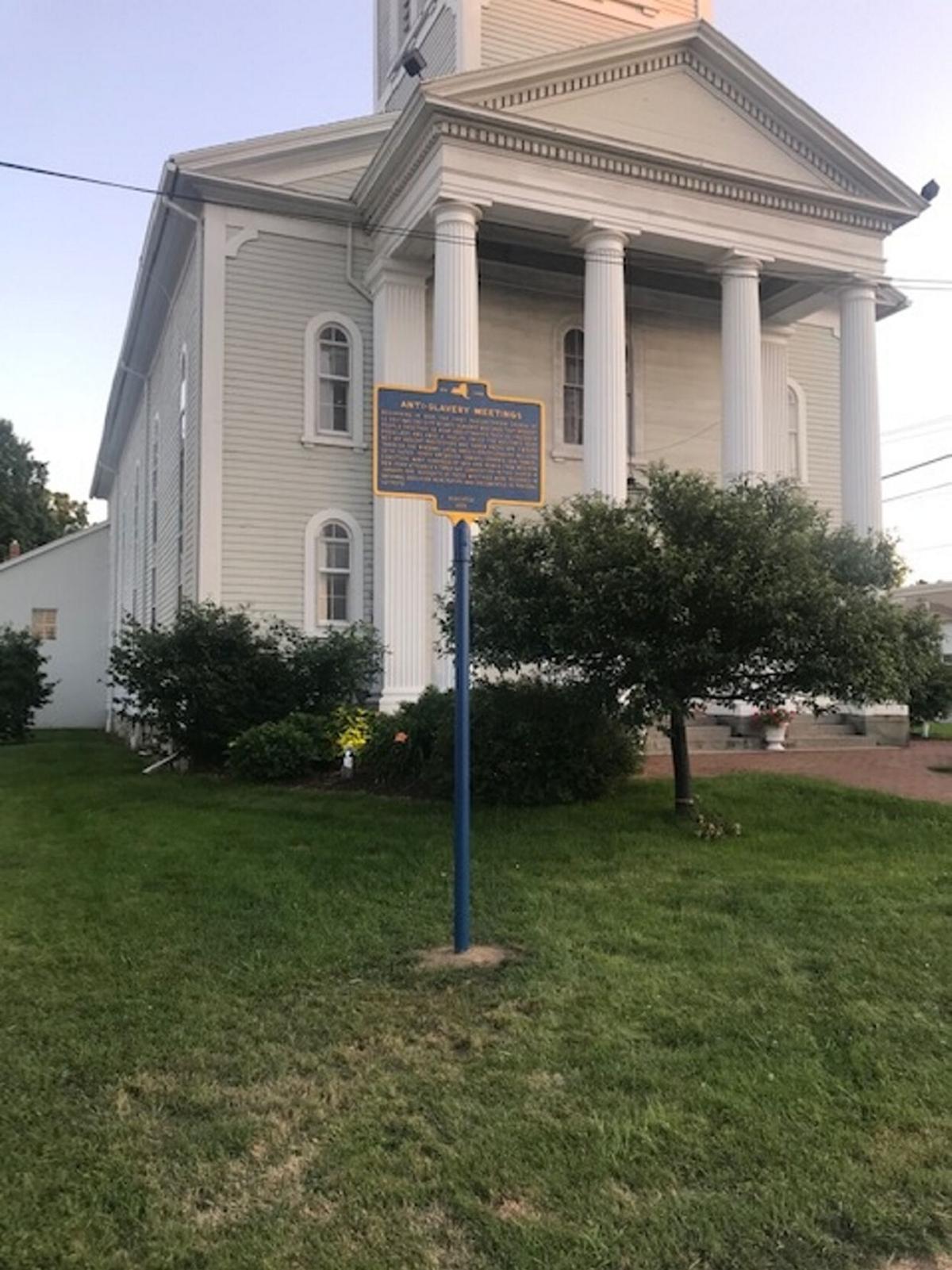 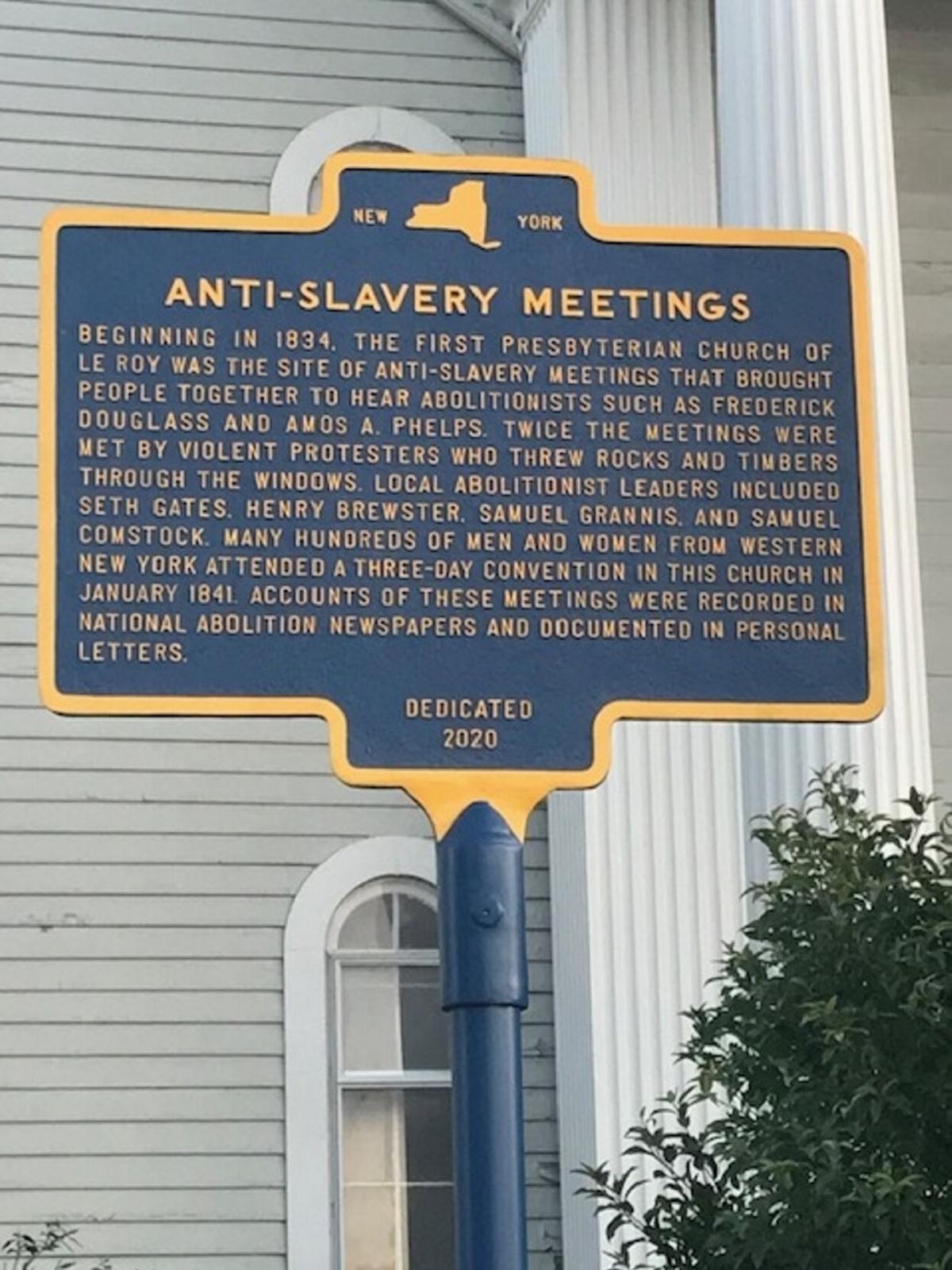 MALLORY DIEFENBACH/DAILY NEWSThis historic marker tells the story of the church’s significance to the anti-slavery movement. 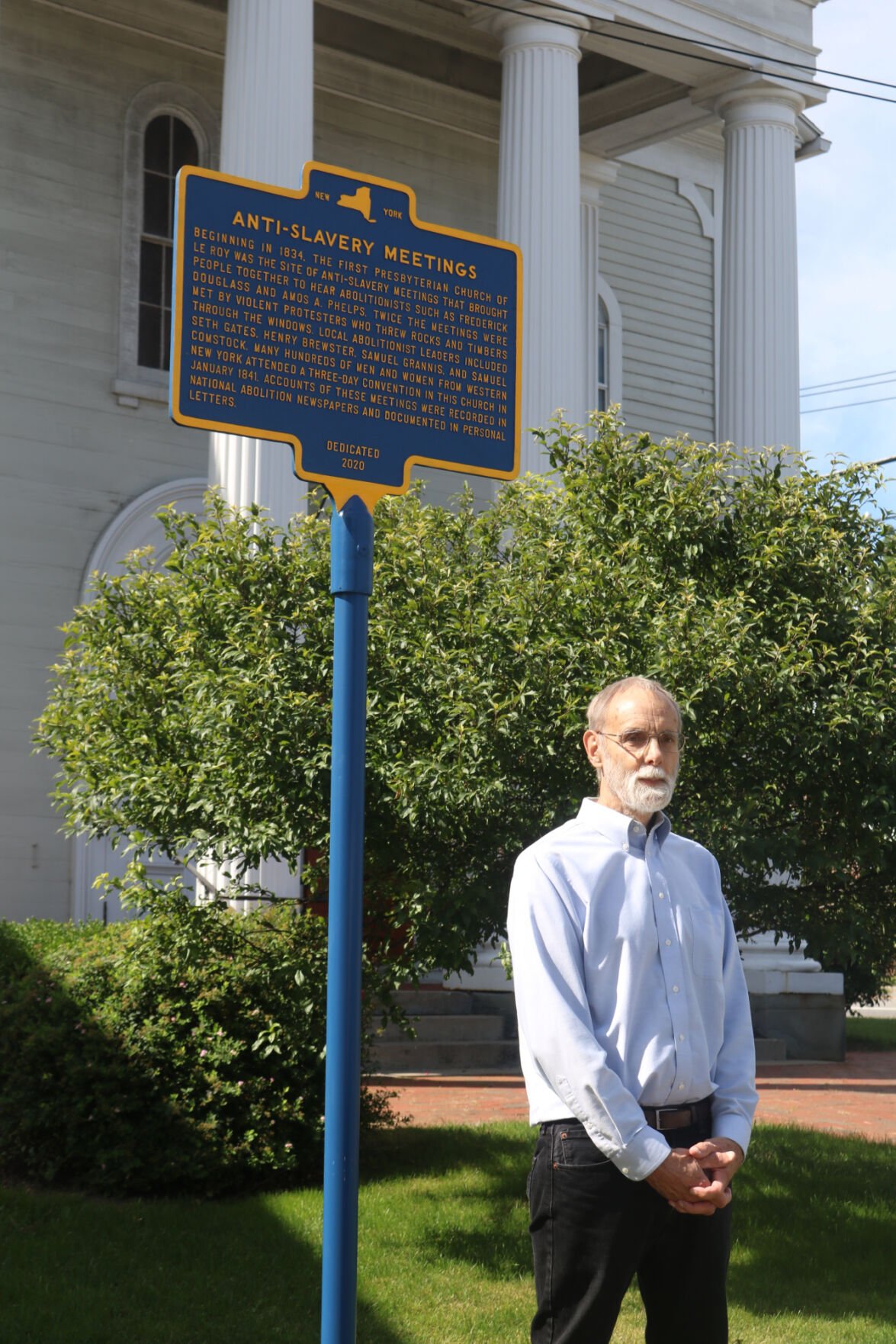 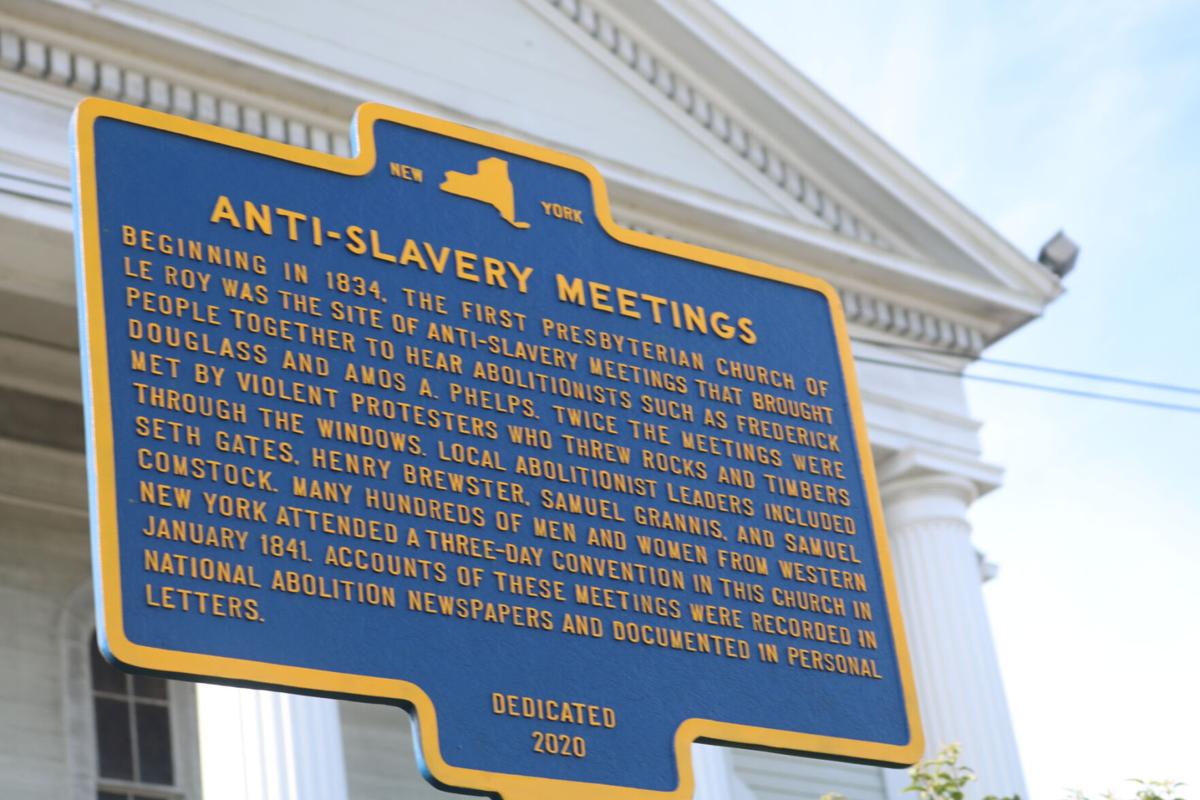 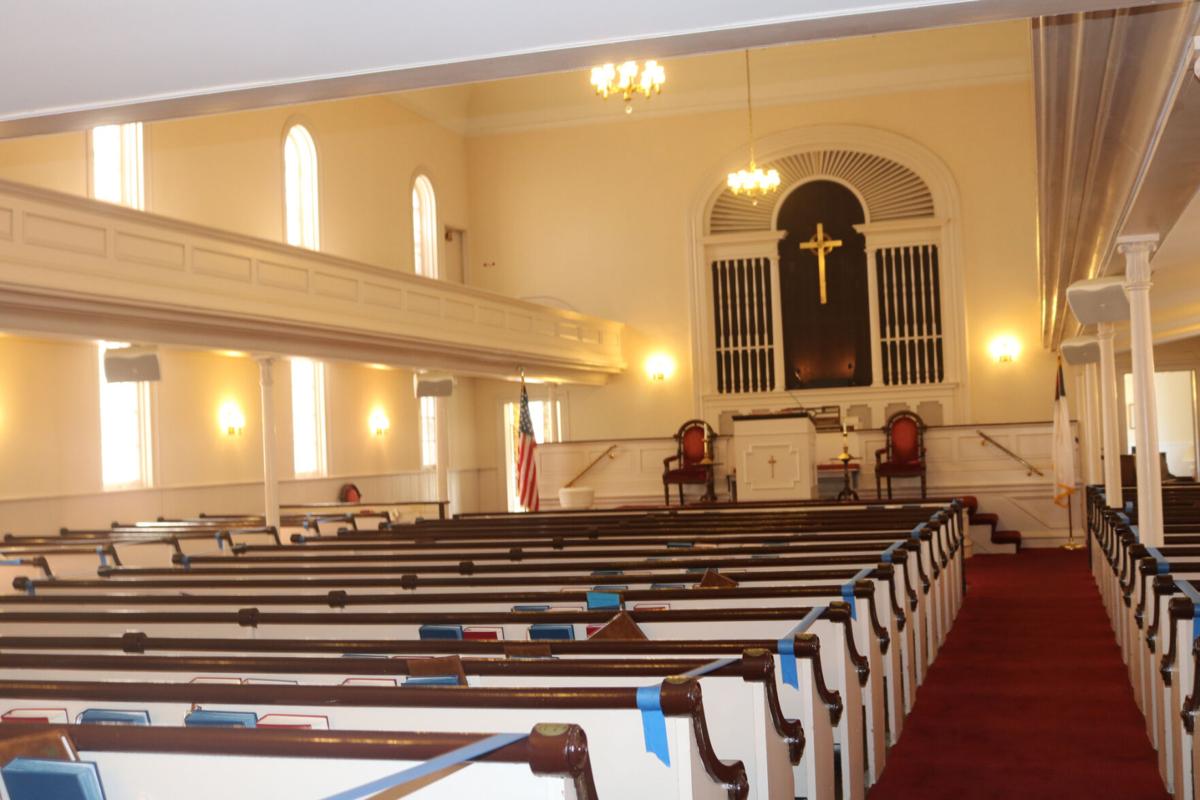 Mallory Diefenbach/Daily NewsInside of the First Presbyterian Church of Le Roy where anti-slavery meetings were held. 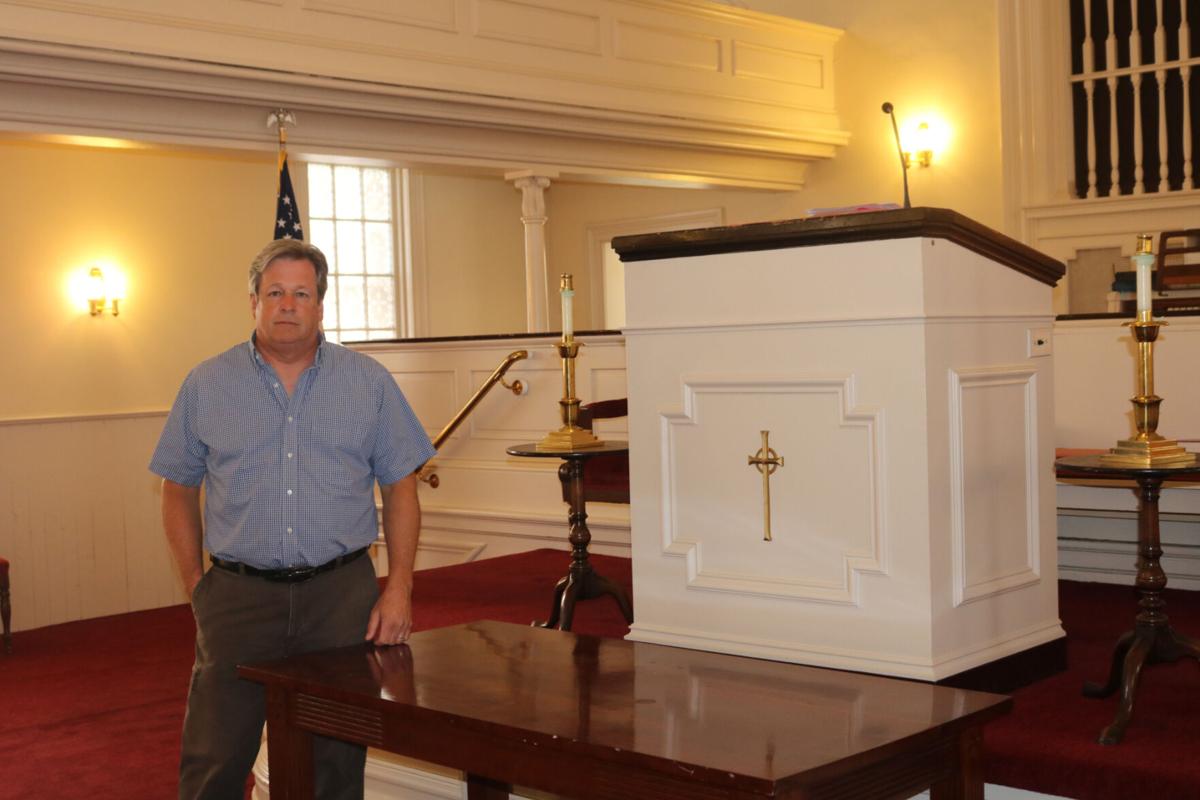 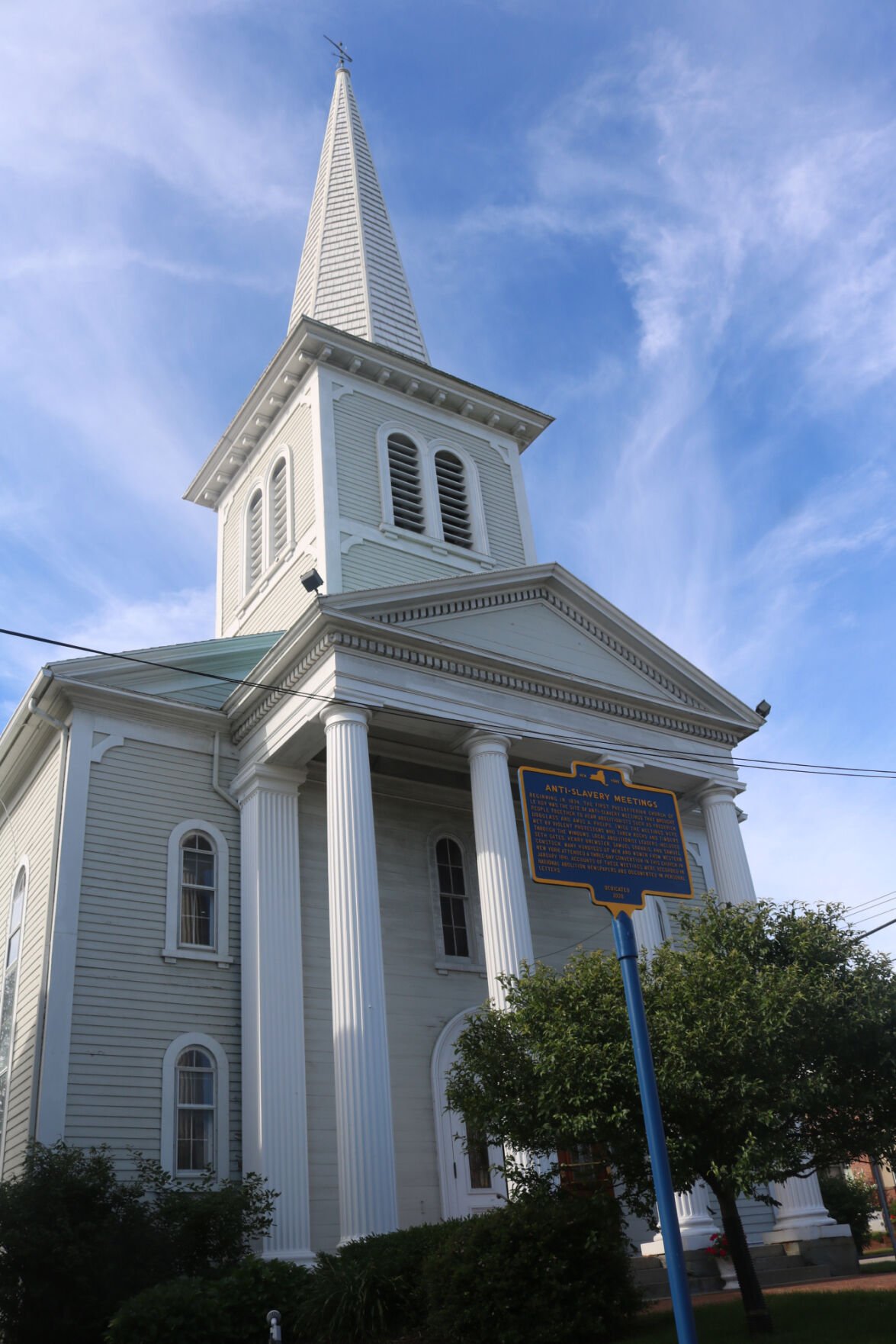 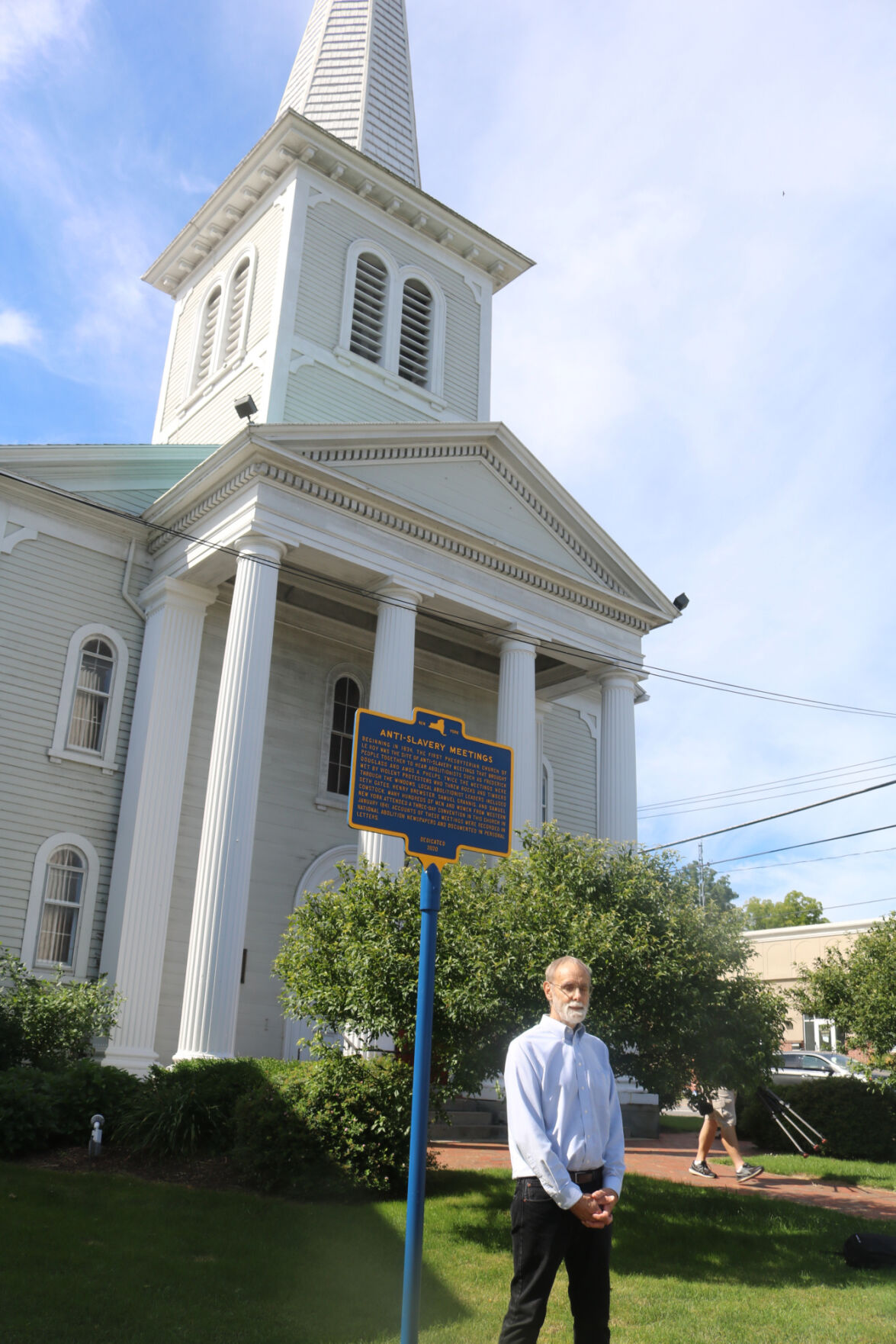 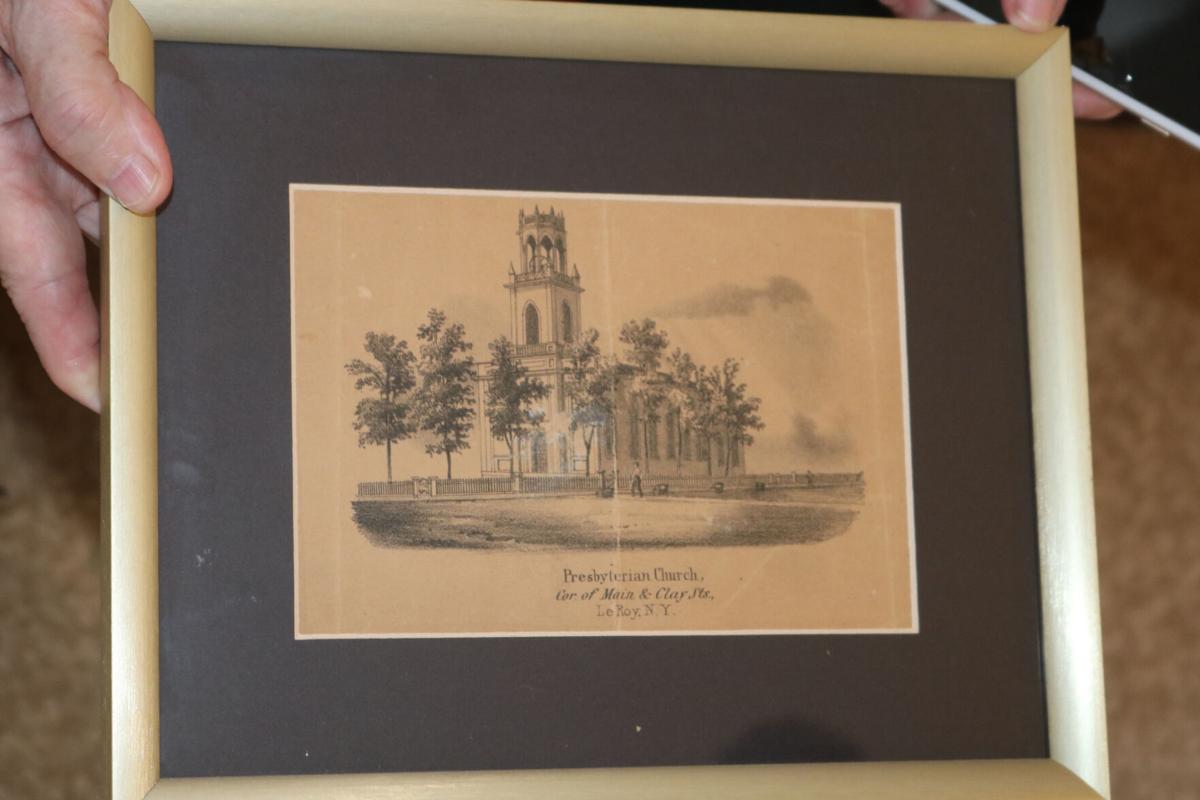 MALLORY DIEFENBACH/DAILY NEWSThis historic marker tells the story of the church’s significance to the anti-slavery movement.

Mallory Diefenbach/Daily NewsInside of the First Presbyterian Church of Le Roy where anti-slavery meetings were held.

LE ROY — There are stories of crowds filling the Presbyterian Church in the village to hear such speakers as abolitionist Frederick Douglass and former slaves. Outside, those stories continued, protestors would throw logs and rocks through the windows.

Other stories tell of staunch abolitionists living in Le Roy who supported the Underground Railroad and who knew William Lloyd Garrison, a prominent abolitionist and journalist, and others.

For years, the stories — which predate the Civil War — were just stories.

But research by the Rev. Jim Evinger of Rochester has verified those stories and put all the pieces of the puzzle together, said Le Roy Historical Society Director Lynne Belluscio.

“I’m thankful this heritage can be seen, literally,” Evinger said. “This heritage is a mirror from the past which casts light into the present, It teaches us about the long struggle for justice and equality of all people in this country. It sets a baseline against which we can measure how far we’ve come, and how far we still have to go. It lets the truth live again. It raises the visibility of people whose example can inspire and sustain. As a Presbyterian, where this started for me, I’m proud of the Le Roy church’s record.”

A new historical marker outside the church at Route 19 and Main Street commemorates the anti-slavery and abolitionist meetings that took place at the church. The marker was placed last Friday. Plans are underway to dedicate the marker at a time when such a gathering will be allowed, Belluscio said.

“It’s great history to be recognized,” she said.

The church celebrated its 200th anniversary in 2017. Evinger saw a timeline of events — tens of feet in length on butcher paper — and he was particularly interested in the anti-slavery and abolition meetings, but knew the dates, people, and places didn’t agree, including when Douglass could have spoken at the church.

“Living in Rochester, I was well aware of anti-slavery efforts and the stories of a number of individuals, but I did not know anything about such efforts in Le Roy,” he said.

So Evinger turned to Belluscio, who is also the village and town historian. She shared the resources at the historical society and Evinger spent months tracking down facts, dates, people and the involvement of the Presbyterian Church.

“I spent nine months doing research, culminating in a public lecture in October which presented the newfound information. I continued for another five months to explore more leads, which led to a more complete account,” he said. “I was very careful to seek corroboration for the various incidents — names of people, specific sites of events, dates, details of what occurred. The biggest roadblock to confirmation was finding that local Western New York newspapers very rarely published news of anti-slavery lecturers or gatherings in the 1830s and 1840s. Even occasions when the speaker was someone as nationally and internationally prominent as Frederick Douglass when he spoke at the church were not documented in local newspapers. In the end, corroboration could be established, but it required pulling together a lot of sources.”

Evinger discovered diary accounts, letters, and newspaper articles in archives and libraries that all validated the events at the church, including two meetings that were met by violent protesters.

“Of many interesting first person accounts, the most interesting was a cache of archived letters on the Boston, Massachusetts, public library website,” he said. “I found correspondence from and to Rev. Amos A. Phelps who was prominent in the American Anti-Slavery Society and lectured in Le Roy in 1835. In Phelps’ original handwriting, one can read his account of what it was like to encounter violent opposition to the anti-slavery and abolitionist position, and the ways he drew strength and courage to sustain the national movement.”

Furthermore, Evinger was able to confirm the visit of Frederick Douglass on Dec. 9, 1847. He pieced together the visits of the Rev. Amos A. Phelps of Massachusetts, at which 100 new members were inducted into the Anti-Slavery Society on Sept. 14, 1835. Le Roy had more members than even Rochester.

Evinger was struck by the degree to which the support in Le Roy was truly a grassroots movement.

“A large number of people were active over time, and there were a number of recognized leaders. This was true for the people of the church and for the larger community,” he said. “The proceedings of the 1841 meeting of the Western New York Anti-Slavery Society, which met at the church for three days in January, no less, drew hundreds of people whose names were published. Of those names, many women are included and a number are identified by their first name rather than by their husbands’ first name. That was not often the case in western New York publications.”

Evinger did some on-site research in Genesee and Monroe counties, especially the local history division of the Rochester Public Library. His search also took him beyond Western New York and frequently drew on digital databases available through the library system at the University of Rochester, where he previously had faculty and research appointments in the School of Nursing and the School of Medicine and Dentistry.

“In retirement, I’ve maintained a library affiliation which gave me access to many 19th century documents and publications,” he said.

In October 2019, Evinger presented his findings to a group of people at the Le Roy Presbyterian Church. He shared a first-hand account of the meeting at the church in 1835 by Phelps when “... we held a meeting in the vestry of the Presbyterian church, to form an Anti-Slavery Society. The evening was dark, & certain fellows of the baser sort seemed determined to have some fun & so having pried open the blinds, they just poked a long board through the windows & dashed the whole of it put & then afterwards they threw a few stones through the windows in the church above. ... We went on bravely & calmly with our business...”

Seth Gates, one of Le Roy’s abolitionists, later wrote more about that evening, “the audience was drenched in water, and the outer church door was fastened and held by a rope.”

When Judge A.P. Hascall, a member of the church, and “other reputable citizens” tried to disperse the mob, they were stoned. Gates’ house was stoned and the windows broken and his wife and children were forced to find refuge in their bedrooms.

Violence was not unique to Le Roy. In 1836, in the nearby village of Fowlerville, Livingston County, arsonists destroyed the church where the Anti-Slavery agent, Henry Brewster Stanton, had lectured.

Evinger has also been researching anti-slavery meetings in Mount Morris. That project has been slowed by the COVID-19 pandemic.

Evinger served congregations in Philadelphia and Rochester for 10 years, and has worked in health care systems for 30 years. Originally from Nebraska, his mother’s side of the family was originally from Western New York. Retired, he now lives in Rochester.

Rev. Jim Evinger of Rochester put together the timeline of anti-slavery movement in Le Roy.