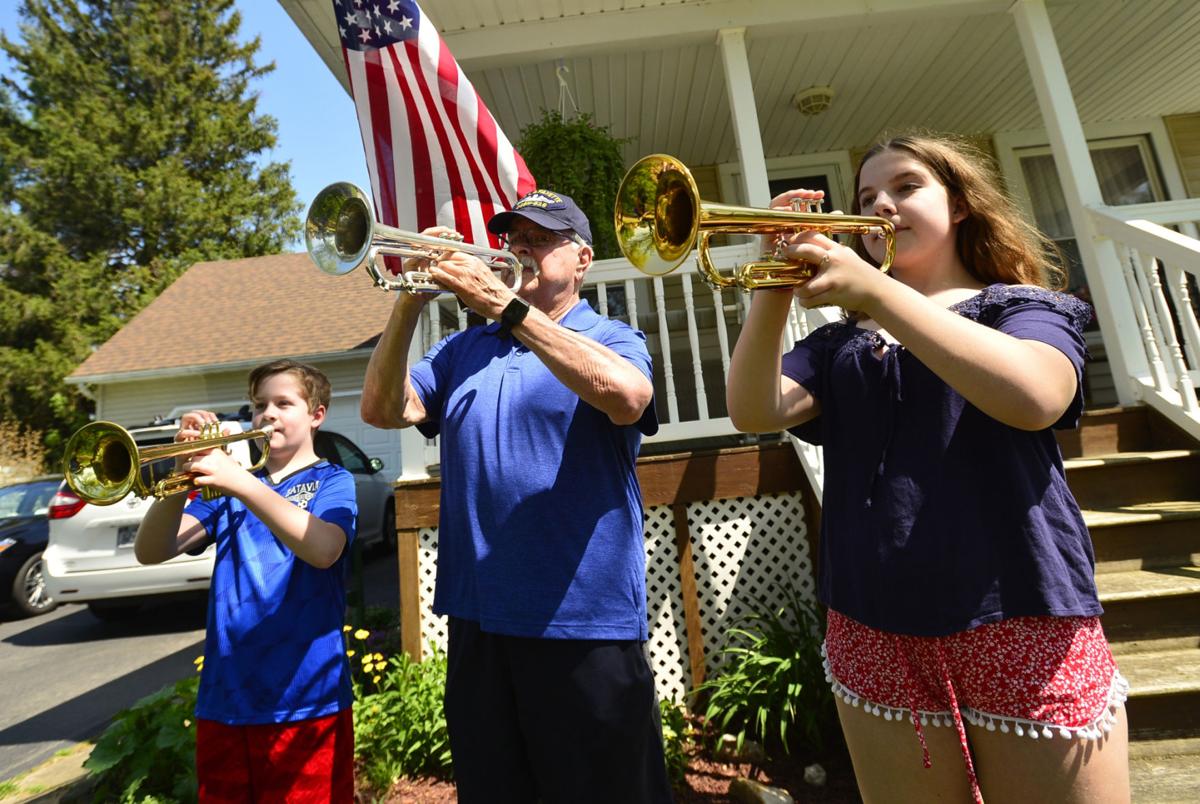 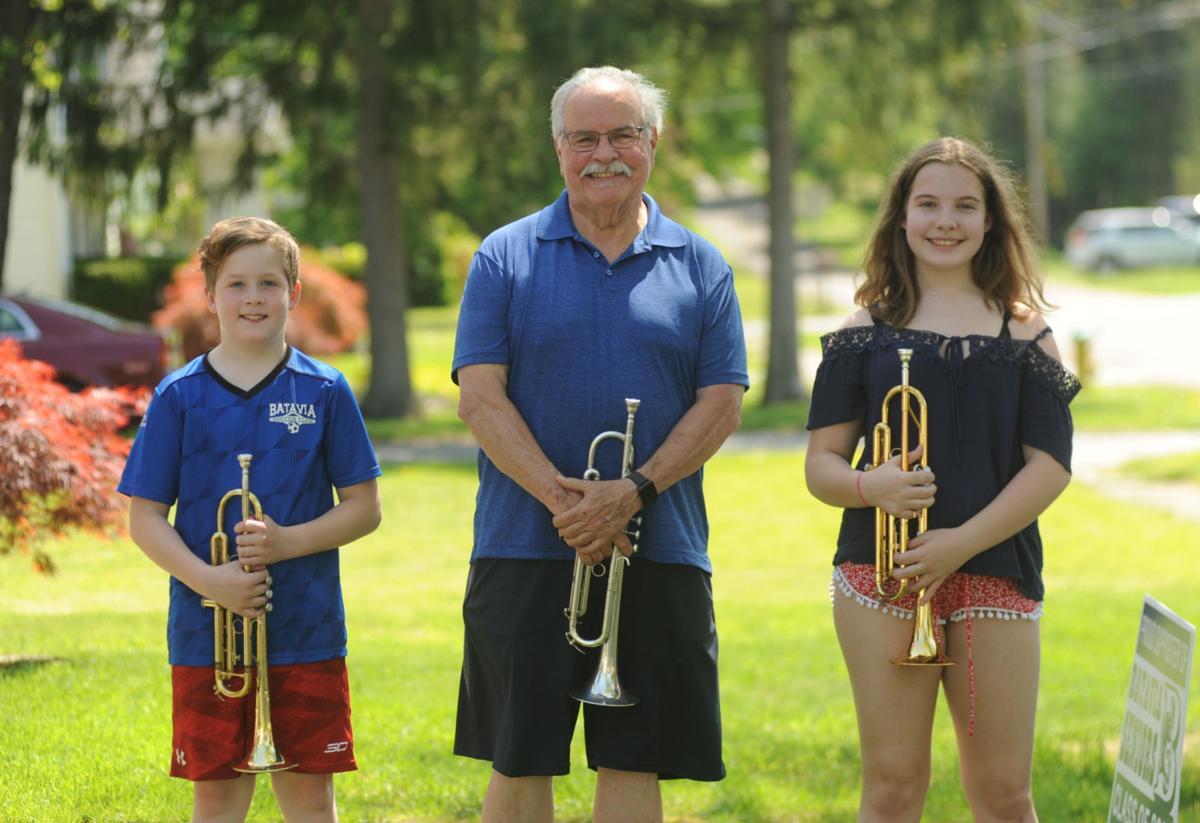 However they heard about it, three Batavia residents were among the national effort, started by CBS News “On the Road” correspondent Steve Hartman and retired Air Force bugler Jari Villanueva, to keep the Memorial Day spirit going by playing taps at 3 p.m. this past Monday.

HAROLD MCJURY of Madison Street said initially, he heard about the 3 p.m. Monday “Taps Across America” on CBS News. Then, he got a call from Sean Williams of Lincoln Avenue.

“He said, ‘Are you going to play?’ I sad, ‘Yeah, sure,’” McJury said. “So when I decided to play, I decided to use my granddaughter and grandson to help me out.”

The grandchildren who joined him in his front yard were Lucy Taggart, 14, and Harry Mellander, 12.

Lucy said this was a great way to honor those who have lost their lives in battle and respect them, and the fact that they made the ultimate sacrifice.

“I feel very proud to represent by playing,” she said.

Harry said it made him happy to play with his grandfather.

McJury said, “I’m a veteran myself, Navy in the Vietnam War, This means a lot to me to play for the veterans I play for all the time anyway. I do a lot of veterans’ funerals ... Every time I do a funeral, I get choked up inside.”

After the trio played for about 40 seconds, McJury told his grandchildren, “You guys did great.”

FRANK PANAPENTO of South Main Street was out on his front porch at 3 p.m. to do his part.

“The word went out ... they were saying that on Memorial Day, all the musicians, buglers, trumpet players get on their porch or on their front lawn and play taps to honor all the service people, to honor all those we lost, those who have given their lives — past, present and future — and for all the police officers, the firefighters, the health care workers,” the 70-year-old Batavia resident said.

Panapento said in Batavia Monday, he and some guys had just played patriotic tunes for people Monday morning.

“We went to the VA, we went to the state nursing home (New York State Veterans Home), all the nursing homes in Batavia, the hospitals. We went out and played a couple of tunes, let people know we appreciate everything they do,” he said.

Panapento said there had to be dozens locally playing taps that day.

“There’s thousands that have signed up across the country to do this,” he said.

Panapento said there doesn’t have to be just one day to do something like this for the men and woman who have made the sacrifices.

“Come on, guys, if you play, there’s no better reason to play,” Panapento said.

SEAN WILLIAMS of 22 Lincoln Ave,, the Batavia Middle School band director who works with Batavia High School brass ensemble students, said playing taps was the least people could do for those who gave everything for their country. Not only did he take part in this, but many people he knows and has worked with did the same.

“I went right out on my front porch. My entire neighborhood stood there. They came out onto their porches,” he said. “They knew we were going to do this at 3 o’clock.”

Williams said he and his wife, Wendy, director of Sound Foundations Voice Studio, both got their students to do videos of themselves playing taps. Sean says it’s not just students. Former students of his, family, friends from the past 50 years and band directors in area school districts including Alexander, Albion, Elba, Attica, Batavia and Byron-Bergen.

“I told them to take video of themselves and send it to me or post it. Almost everybody did it for the fun of it,” he said. “This is just a push in unison to do this.

“Some of the students did it for grandparents who passed away. I have townspeople that are active musicians and their grandchildren performing with them,” he said. “I have band directors that were participating in this who are also active as band directors in the surrounding community, the GLOW region — all of those band directors partook in this and they played taps at 3 o’clock.”

As for himself, Sean Williams says he took part in “Taps Across America” mainly as a way to give back to the community he loves.

“This is something we can do during the quarantine We all do this knowing that we are just humbled knowing that these people gave an incredible sacrifice. To do it from our front porches during this quarantine was beyond belief ...” he said. “It’s only appropriate that we play for our entire community, not just for ourselves, but for all of America. It is to play for all of those who have given their lives.”

Sean said he has talked about this with his son, Charlie, 24, a Navy cadet stationed in Norfolk, Va.

There’s a little bit of history behind wanting to be part of “Taps Across America,” too, Sean says. Over 100 years ago, Glenn Shotwell Loomis lived across Lincoln Avenue from where Williams lives now.