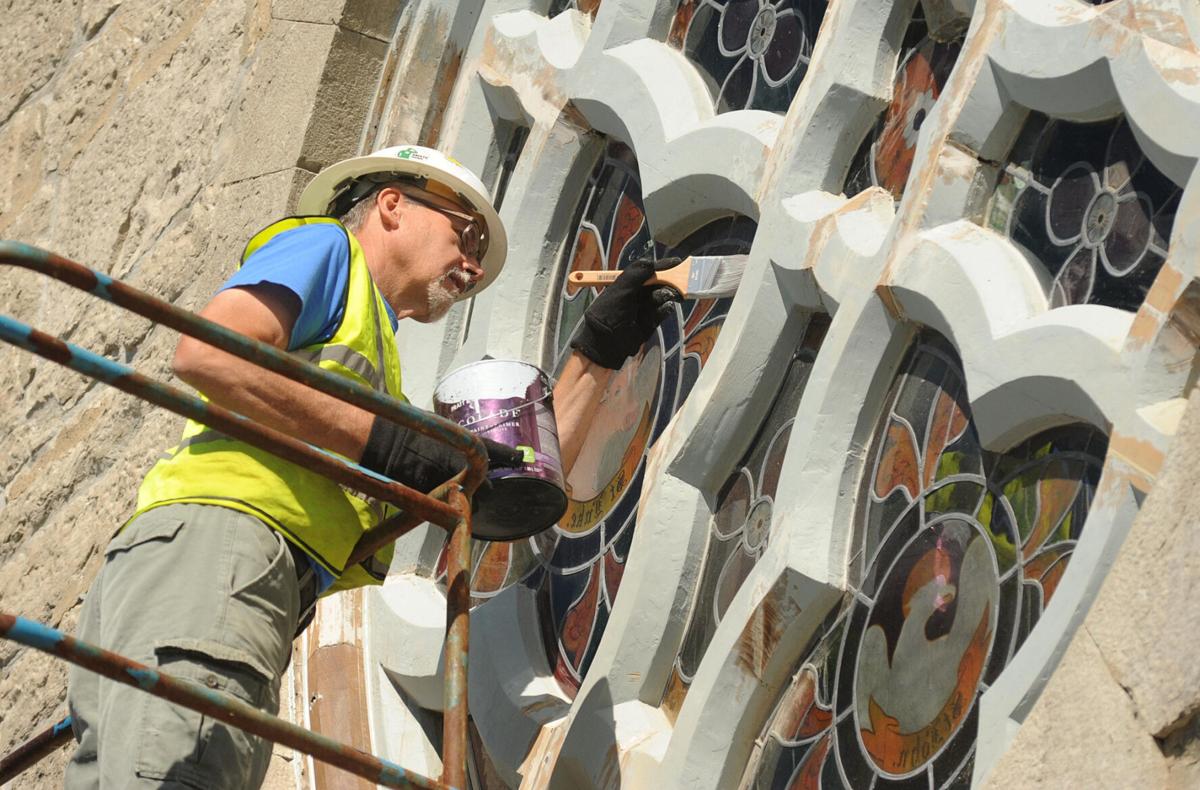 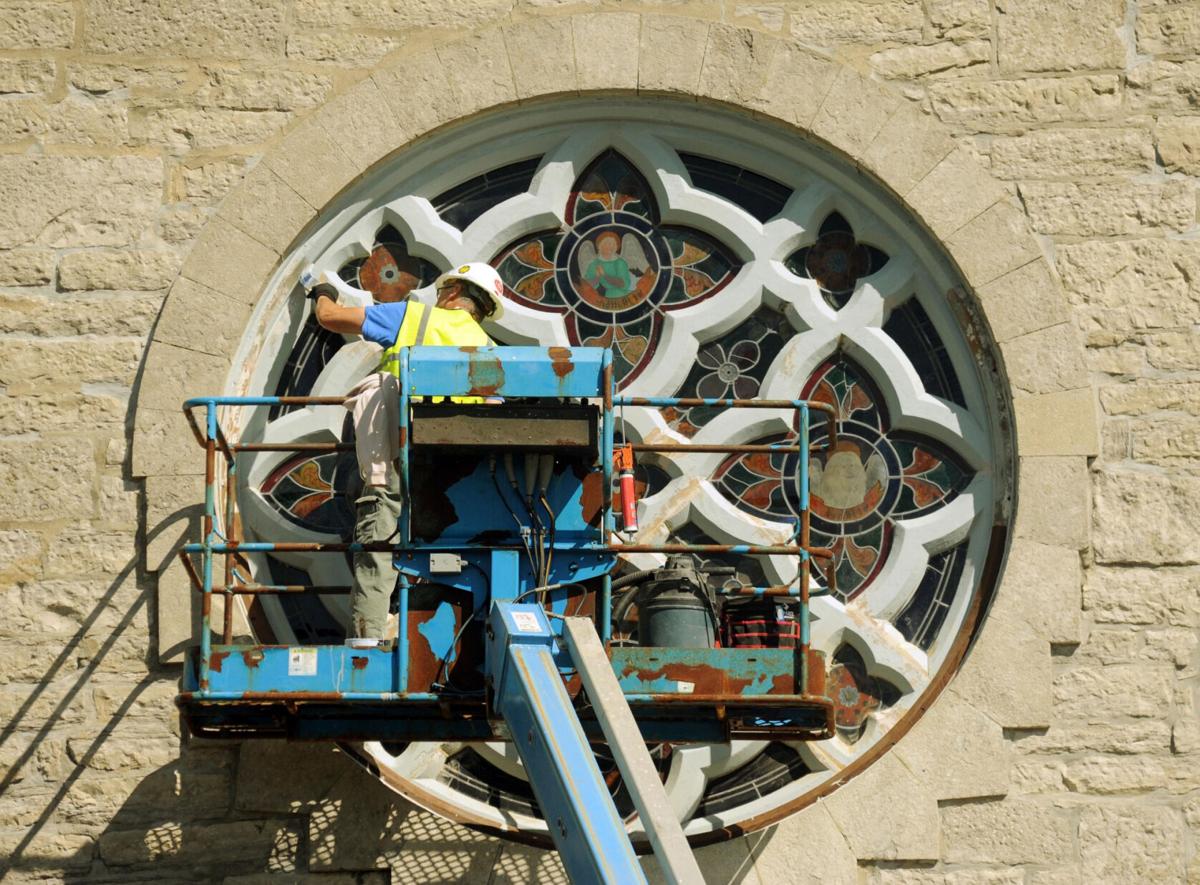 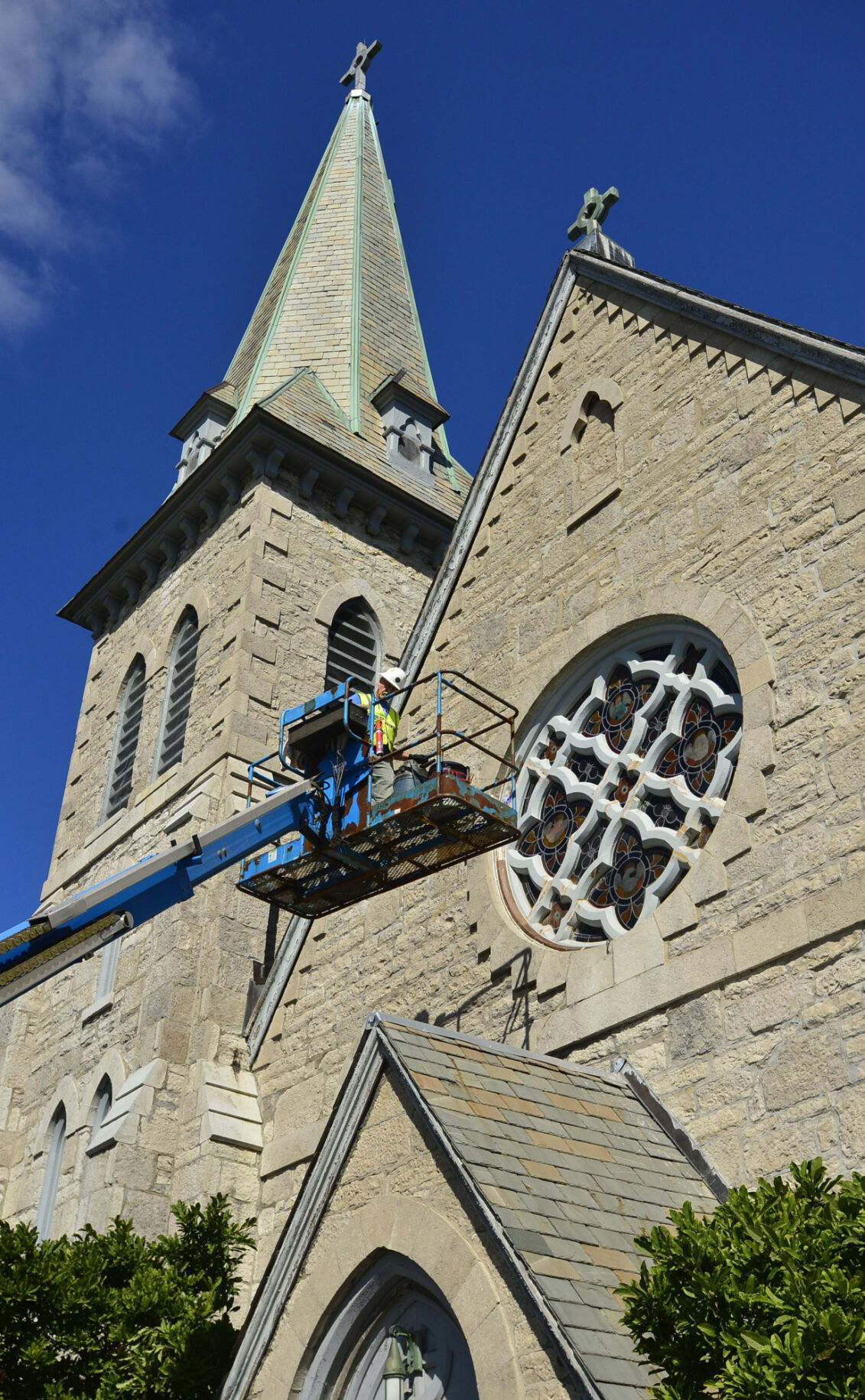 Don Chmielowic heads up to work on the stained glass window, Thursday morning at St. Mark’s Church in Le Roy.

Don Chmielowic heads up to work on the stained glass window, Thursday morning at St. Mark’s Church in Le Roy.

LE ROY — Restorations have been ongoing since May at St. Mark’s Episcopal Church in the village.

Work was finishing up Thursday on the rose window on the south side of the church, facing the street. The window is well-known to church and community members for its beauty.

The rose window was contracted to be built on May 23, 1870, originally.

The work is being done through a $10,000 Sacred Sites matching grant meant specifically for the church’s wooden storm windows. Ann VerHague, grant writer and retired architect, said it was important because the church has beautiful stained glass windows to protect.

The church and congregation themselves have a deep history in the village.

St. Mark’s celebrated its 200th anniversary in 2017. In that same year it also received an award from the Landmark Society during the latter’s annual Preservation Awards and Recognition Dinner.

Even before that church was built, early Episcopalians in the Ganson Settlement, as Le Roy was originally called, had an itinerant missionary, the Rev. Davenport Phelps, who conducted services as early as 1802. He covered an immense area of New York state, so his visits were limited.

Early members of the church were some of the leaders of the small community. They included Timothy Hatch, an officer from the Revolutionary War; Ezra Platt II, original joint owner of the Triangle Tract, a property that ran from Le Roy up to Lake Ontario; and Jacob Le Roy, son of the village’s namesake, Herman Le Roy.

The congregation originally worshiped in a schoolhouse on Craigie Street, in space shared with the local Presbyterian and Baptist congregations. Apparently, it was an uneasy alliance, and in 1826, work was started on the first Episcopal Church located near the corner of Church and St. Mark’s streets.

From the beginning, that church posed special problems, including the small panes of the large Gothic windows, which leaked air and moisture. After just 45 years in the original building, the vestry at St. Mark’s chose to purchase property on East Main Street for a new church.

In 1867, it paid $6,750 for land that included Upham’s mill, a flour mill that would serve as a foundation. The parish raised $25,000 and hired Rochester architect A.J. Warner, who designed the stone building in English Gothic style. The Patterson Company of Warsaw was the contractor.

The first service was held there in 1870.

So where does the restoration stand?

The church raised money to meet its share of the matching grant costs.

The rose window didn’t have a storm window, although hardware cloth provided some protection. But when officials went up to examine it, they found peeling paint and shrinkage cracks.

Contractor Gary Fink of Bergen is working on all the St. Mark’s windows. He said the perimeter molding was all rotted on the bottom.

“I was able to make (the replacement) out of thermally modified ash — which is all they’re allowed to use in Europe instead of pressure treated because they can’t have chemicals,” he said. “It’s rot resistant and insect proof. So it’s really nice stuff.”

The real trouble for restoration work will come when they try to work on the west side of the building. The grade going down to Oatka Creek is 45 degrees, and Fink said he can’t find a machine to go down there. He did get a price for scaffolding, but said it was $25,000 to put it up and take it down.

“You don’t think of storm window repair and replacement when you think of historic buildings, but it’s to keep those beautiful windows in the sanctuary safe,” VerHague said.

So they aim to continue the careful work to preserve historic building and its beautiful glass.