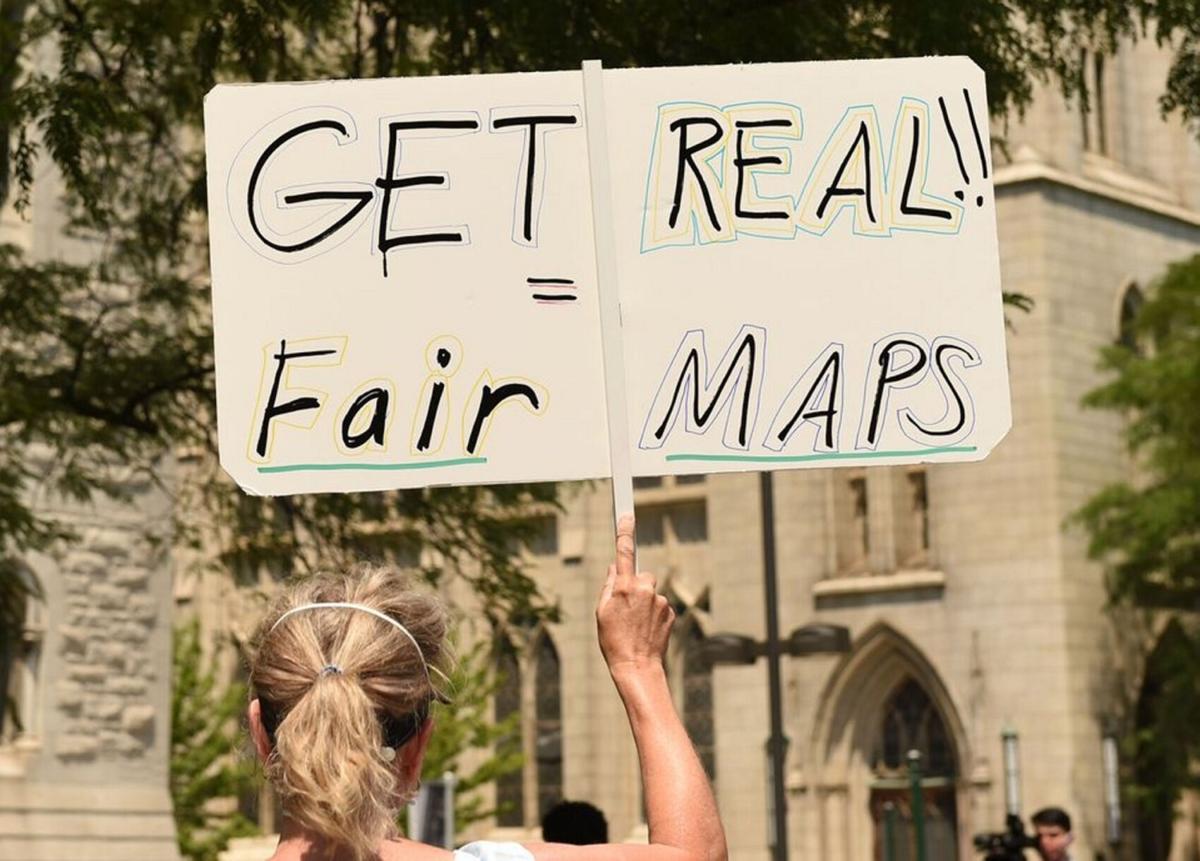 Dennis Nett/dnett syracuse.com A group of 100 demonstrators gathered at Columbus Circle in Onondaga County on July 7 to voice their opinions on redistricting. The state’s 10-member Independent Redistricting Commission has met several times this fall to discuss logistics, but has not started redrawing legislative district lines. 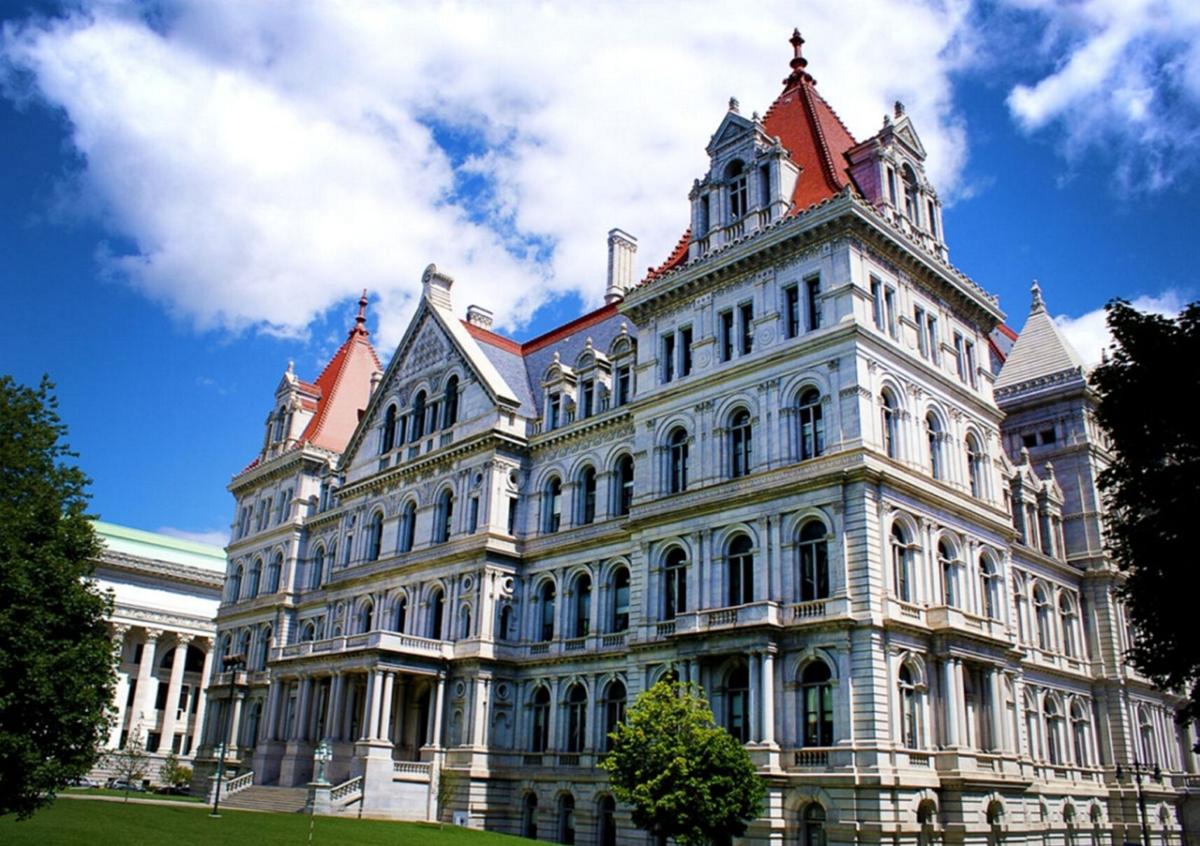 File photo The New York State Capitol in Albany. The state’s Independent Redistricting Commission is working to redraw all Senate, Assembly and congressional lines before 2022.

Dennis Nett/dnett syracuse.com A group of 100 demonstrators gathered at Columbus Circle in Onondaga County on July 7 to voice their opinions on redistricting. The state’s 10-member Independent Redistricting Commission has met several times this fall to discuss logistics, but has not started redrawing legislative district lines.

File photo The New York State Capitol in Albany. The state’s Independent Redistricting Commission is working to redraw all Senate, Assembly and congressional lines before 2022.

Last week, Census Bureau officials announced they cannot complete state population totals and the allocation of congressional districts by the statutory Dec. 31 deadline, which is expected to delay governmental programs, funding and decisions based on updated census numbers.

Census data will remain the focus through New York’s redistricting process — concerning commissioners and officials about the delay in updated population counts because of the COVID-19 pandemic.

“Because of the pandemic, that deadline of delivering data might be delayed,” said Jeffrey Wice, an adjunct professor and senior fellow at New York Law School.

Wice led a virtual forum hosted by New York Law School and the New York Census and Redistricting Institute Center for New York City Law with two appointed redistricting commissioners and experts on the topic about the state process this week.

“We don’t know if Congress will seek to extend the data delivery, which would reduce their time to develop plans,” Wice said, adding the commission may not receive data until summer 2021. “So they’ll be under a tight time frame.”

Reapportionment of the state Legislature’s 213 districts — 63 in the Senate and 150 in the Assembly — occurs every 10 years following completion of the U.S. Census to determine boundaries for congressional and state legislative offices.

New York voters approved a constitutional amendment in 2014 to change the redistricting process beginning with the 2020 census. The new state legislative and U.S. congressional lines are supposed to be in place for the 2022 elections.

Oral arguments before the U.S. Supreme Court are expected to take place Monday against President Donald Trump’s July 2020 memorandum to exclude undocumented immigrants from the census.

Commissioner John Flateau, a business professor at CUNY’s Medgar Evers College and former chief of staff to the late New York City Mayor David Dinkins, said all people residing in the country must count regardless of citizenship status.

“Persons are counted in the census,” Flateau said, stressing the word “persons.” “Persons. There are no subtractions for illegal aliens or anything like that.”

Flateau cited an example during the state’s 2012 redistricting where one upstate district had 284,000 people, while a Brooklyn district in Kings County with predominantly Black and brown residents, had 314,000 constituents.

“Thirty thousand more people were loaded into districts in a community that is Black and brown,” Flateau said. “That is, I consider, a form of gerrymandering, and we must ensure that does not happen going forward.”

Former Sen. Jack Martins, a Republican, who represented the 7th District in Long Island for three terms, anticipates census data in June or July to complete maps for the following September.

“We must start thinking about it that way and preparing things in advance,” Martins said. “We’re going to need to try to take and make an effort to get those maps done in advance and provide the Legislature with the opportunity before January [2022].

“The sooner we provide those maps, the sooner we have direct participation with regards to our maps, I think the better off this process is going to be,” he added. “It is a daunting task, but I am prepared to do that and I know my fellow commissioners are as well.”

Until the 2014 change, state lawmakers drew district maps requiring passage in both houses of the Legislature.

The commission has until Jan. 1, 2022 to develop maps for state senators, assembly members and New York’s Congressional delegation to review.

The state Senate and Assembly must each approve the maps with a two-thirds majority vote in each chamber because of one-party, or Democratic, legislative control, as required under the state constitution.

A commissioner appointed by each state Republican leader must also approve the plans.

The commission has two chances to submit redistricting plans for Legislature approval and public hearings in New York City, Rochester, Buffalo, Syracuse and White Plains, and Nassau and Suffolk counties in Long Island.

Lawmakers will draw maps if a second set is rejected, Wice said.

The new lines must be in place before candidates begin petitioning for the 2022 election cycle that February.

All districts must be drawn equally by population, Flateau said, with an included public explanation for any exceptions.

“That means districts that don’t look like ink bottles knocked over on a table or tentacles going in all kinds of weird directions,” Flateau said. “We need to know from the people from the neighborhoods, from the communities, what are the boundaries... what defines it, and it is our responsibility, in part, to take it into account as we do the line drawing.”

Flateau encouraged community leaders in those cities and across the state to provide input on existing legislative lines and remain active in the redistricting process.

“Please step up and present your analysis, your critique, of what the existing lines are and what your vision of the next iteration of the legislative lines and congressional districts should look like to promote democracy for all New Yorkers,” he said.

The Voting Rights Act includes specific racial protections for communities of color, as district lines have been gerrymandered in the past as a method of voter suppression for certain groups, said Jerry Vattamala, a leader with the Asian-American Legal Defense and Education Fund.

“There is history of dividing communities, and specifically, communities of color,” Vattamala said. “The only time we have had electoral success for New York City and the state is when we had fair districts drawn. We are advocating on behalf of communities to keep us together.”

The Democrats’ new constitutional amendment plan must be approved again by a separately elected session of the Legislature. The plan to amend the constitution is slated to go before voters on the Nov. 2, 2021, ballot.

New York City’s local elected districts are set to be redrawn following the state process, which will take several years.

The commission is next scheduled to meet 11 a.m. Thursday to designate a group leader and discuss the budget.