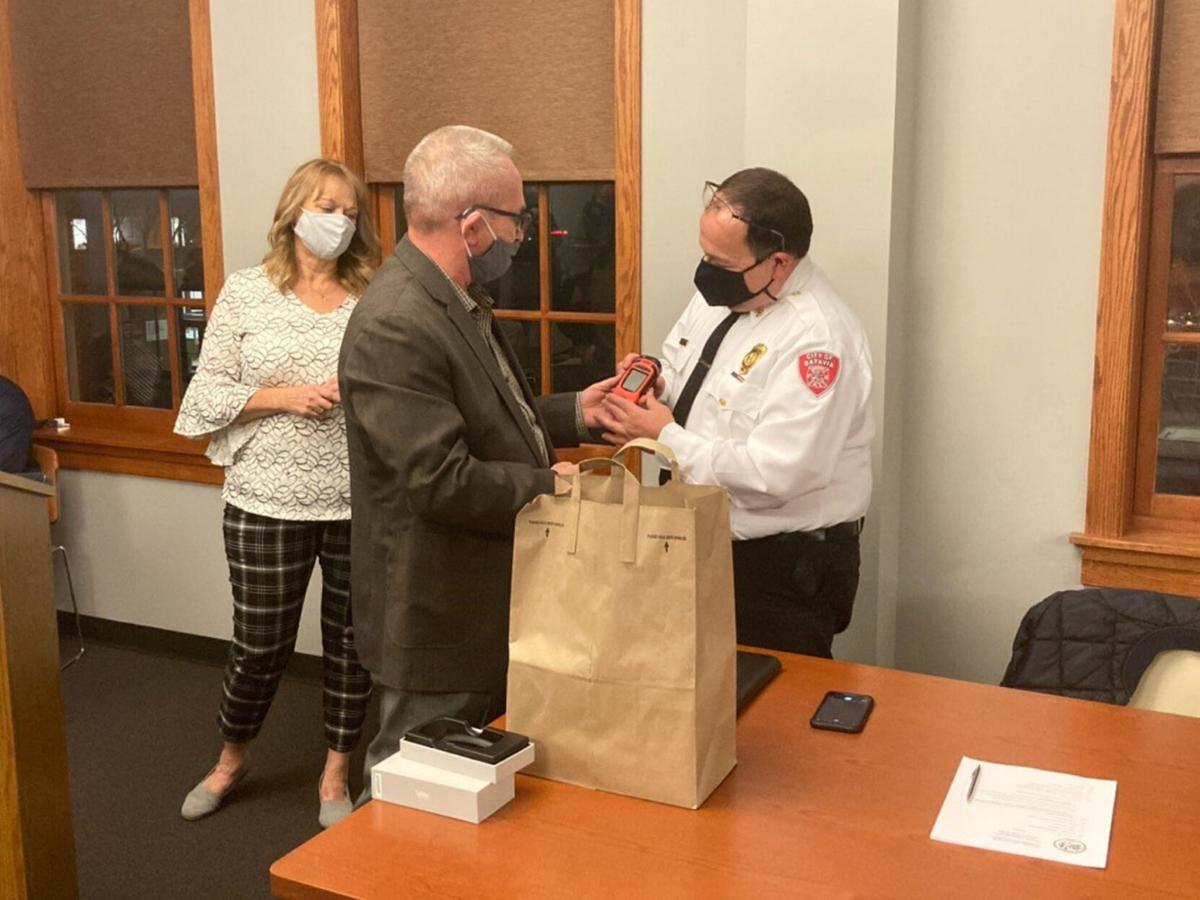 BRIAN QUINN/DAILY NEWSAfter Tom Douglas and Tim Stengel were honored for their careers with the City of Batavia Fire Department Monday, Douglas brought over a bag of 10 thermal imaging cameras to present to Fire Chief Stefano Napolitano, a gift to the department. 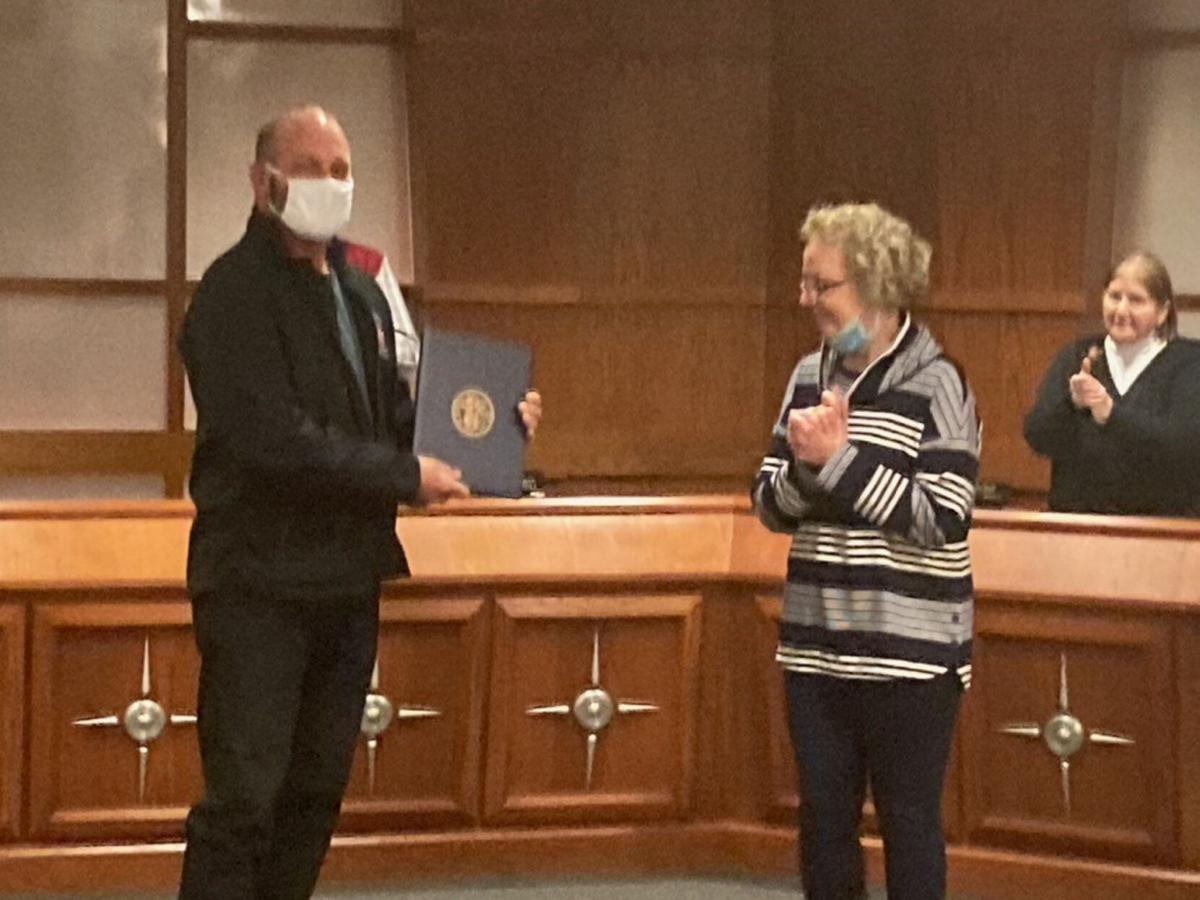 BRIAN QUINN/DAILY NEWSAfter Tom Douglas and Tim Stengel were honored for their careers with the City of Batavia Fire Department Monday, Douglas brought over a bag of 10 thermal imaging cameras to present to Fire Chief Stefano Napolitano, a gift to the department.

BATAVIA — Two retired firefighters with a combined 42 years of experience were honored Monday night for their decades of service to the city and their fellow firefighters.

One of them, Tom Douglas, ended his career Oct. 15 after 22 years with the City of Batavia Fire Department.

Councilperson-At-Large Bob Bialkowski read the proclamation for Douglas. Douglas began his career Aug. 1, 1998 as a member of the City Fire Department’s Ambulance Service and was later promoted to firefighter.

“Tom brought a great deal of experience to the job, shared his knowledge of Genesee County’s emergency operations with fellow employees and was the senior man in the first platoon, mentoring new firefighters for many years. Tom took great pride in his detail and all the fire department’s apparatus and mentored new firefighters to do the same,” Bialkowski read. “Tom was the driving force in implementing the fire department’s emergency medical service program, serving as a certified lab instructor, certified instructor-coordinator, course administrator for the City of Batavia’s Emergency Medical Services, ensuring Batavia residents will have the best quality EMS for years to come.”

Douglas said of his time with the city, “It was a lot of changes as we all know, we started out at the ambulance days ... and when we progressed to it, to the situation we’re in now, we got it going.”

He thanked his family, saying, “A lot of hours I was gone, they were nice enough to put up with it ...”

“My wife, Debbie, she kept the home fires going while I was out working ... or playing, I don’t know,” he joked, to laughter from the audience.

Councilmember Kathy Briggs read the proclamation honoring Stengel for his retirement May 26 after 20 years of service. He began his career March 27, 2000.

“Tim brought a great deal of experience to the job and has become a mentor to new employees by sharing his knowledge of the department and the firefighting profession. Timothy Stengel was a positive role model to all the firefighters throughout his 20-year career ... He always displayed a calming presence, no matter how stressful the situation. His professionalism and positive attitude will be missed by his coworkers.”

Stengel said, “It was a privilege to serve the residents and the city of Batavia — working with city management, city fire leadership and my coworkers who are here tonight to support me. It was a great career and I’m just blessed. Thank you.”

There was more to come, though. Douglas presented a gift of 10 thermal imaging cameras to Fire Chief Stefano Napolitano and the department Monday night.

“You guys can use them. We’ll leave them with the chief now and you can put them in service. Hopefully they’ll keep you guys safe,” Douglas said. “If we get a big incident, we’re covering a large warehouse or something, trying to find something, we’ve got two or three cameras. Now, each one of the guys on the crew will have a personal camera that can go in to either help them find what they need or else to help them get out or locate a body and things like that.”

Napolitano said unless you’re in the fire service, you don’t realize how invaluable a thermal imaging camera is.

“As Tom alluded to, we have three thermal imaging cameras right now. But, the ability for each firefighter to carry their own personal thermal imaging camera while they’re inside a structure, doing an initial sizeup, it’s invaluable. This is an example of Tom and Tim, as senior firefighters, even in retirement, they’re still giving. They’re still mentoring,” Napolitano said. “To lose their experience hurts us. What we’re really proud of is that these young firefighters here, they learn from two of the best. As a result, they learn how to become a senior firefighter because they’re going to do things better. They’re going to do things more smartly.

“These 10 tools are going to enhance getting them to where you guys are,” Napolitano said to Douglas and Stengel.

“On behalf of the department, I can’t say ‘Thank you’ enough for the generosity and for your leadership and your service to our department,” he said.