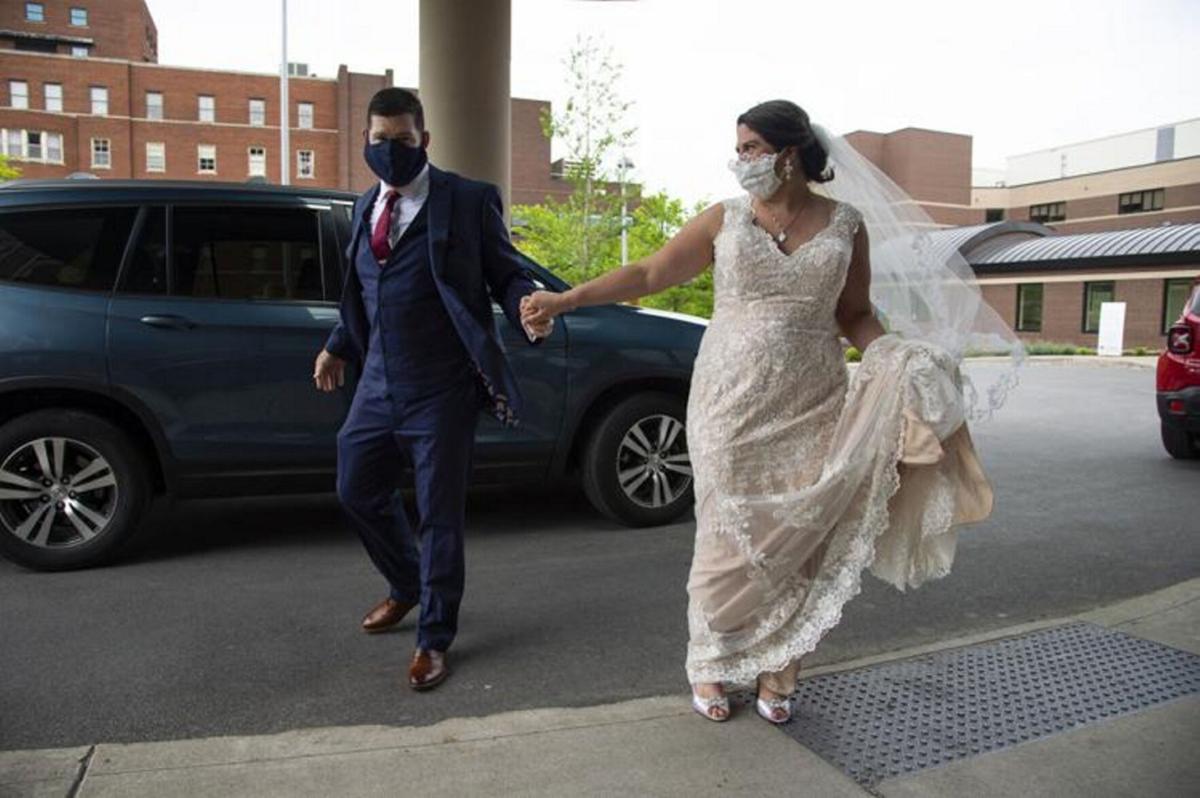 Kyle Upshaw and wife Catherine are shown soon after their wedding amid COVID restrictions in May. Watertown Daily Times 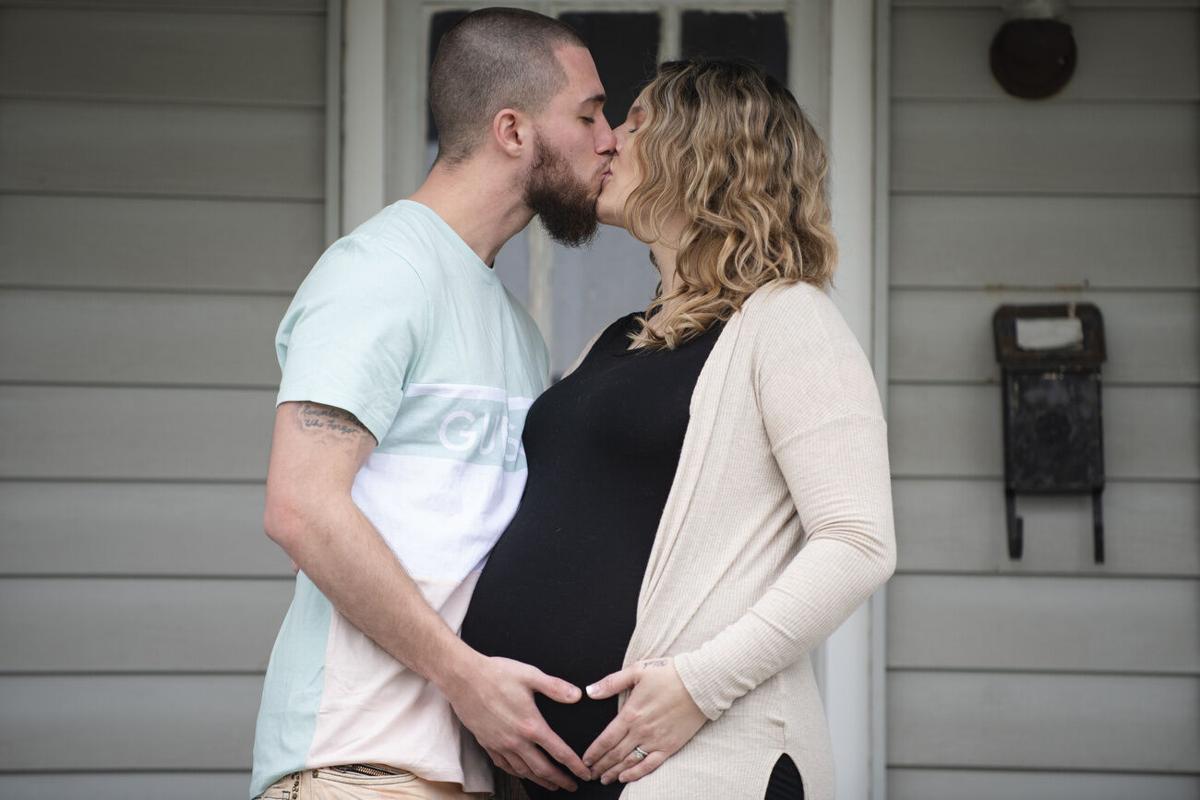 Drew and Kelsey Schroy kiss on the front porch of their home in Watertown on April 24, a day after the couple was married in a virtual ceremony. Watertown Daily Times

Kyle Upshaw and wife Catherine are shown soon after their wedding amid COVID restrictions in May. Watertown Daily Times

Drew and Kelsey Schroy kiss on the front porch of their home in Watertown on April 24, a day after the couple was married in a virtual ceremony. Watertown Daily Times

ALBANY — Gov. Andrew Cuomo announced Friday that the state will allow wedding receptions to resume March 15 at 50% venue capacity or a maximum of 150 people. Events must also be approved by the local health department.

“Going forward, we are very excited about the possibility of reopening venues with testing.” Gov. Cuomo said Friday. “We demonstrated it in Buffalo at the Buffalo Bills playoff game. Seven thousand people tested before they went into the stadium. We’ve had virtually no cases of spread from that game, 7,000 people.”

“We’re not going to have the full vaccine for many, many months. In New York, we want to use testing as the key to reopening events and we tested it in Buffalo and we want to start to extend it,” he said.

Despite the good news, the governor warned that things can change at anytime, noting that while vaccinations continue, there are concerns about highly contagious COVID strains and the still-rising death toll.

Lovestruck diners are also in luck as restaurants in New York City can once again serve customers indoors starting on Valentine’s Day.

Amid a post-holiday decline in COVID cases and hospitalizations, the governor said that Big Apple eateries will be allowed to reopen their doors with a strict 25% capacity limit as long as numbers continue to decline.

“Twenty-five percent is better than zero, and that’s where we are now,” Cuomo said during a press briefing from Albany. “If hell develops and the sky falls and a new variant explodes onto the scene, then we’ll have the opposite problem.”

The governor noted that New York City’s positivity rate has dropped from a high of 7.1% on Jan. 5 to just below 5% as of Jan. 28, a good indicator that the city has rounded a curve.

“All the models project that number to continue to drop,” he said.

“We make decisions based on facts, and based on the numbers, New York City numbers are down,” he said during a briefing in Albany. “But facts change. It sounds inconsistent. We like to think a fact is always a fact. No, facts change. COVID facts change dramatically, and they change often.

“If there are facts, and the facts change, we will have a different situation,” he said.

Cuomo barred indoor dining in the five boroughs in December as COVID-19 cases spiked. Struggling eateries were forced to offer takeout or outdoor seating throughout the holiday season. The shutdown followed a brief two-month reprieve that saw dining rooms open at 25% capacity during the fall.

The announcement was a quick turnaround for the governor, who just days earlier said he was “not contemplating” reversing the current ban on serving customers inside.

While restaurants upstate remain capped at 50% capacity, the governor said earlier in the week he’s not ready to lift a 10 p.m. curfew that applies statewide to establishments that serve alcohol, arguing that late-night revelry could become a problem.

Earl Greer, who has owned the Hi-Life bar and restaurant on Amsterdam and W. 83rd Street since 1991, already had Valentine’s Day circled on his calendar before Cuomo’s announcement.

“We are happy to have some indoor dining back,” Greer said. “I think Valentine’s Day may have been selected because it’s a cute day to open. I think if it’s safe, let’s open a week sooner than that. We’ll make the best of it. We’re going to have a jazz saxophonist on the street. The theme will be love is in the air and some love will be happening indoors now, too.”

La Sirene owner Benjamin Cosso, 32, would like Cuomo to move the target date up a couple of weeks. He said his French bistro, on the corner of Amsterdam Ave. and W. 80th Street, could certainly use the business.

“Every improvement is good,” Cosso said. “We wish it’d be earlier than that. It’s good it happened on Valentine’s Day. We are hoping for a crowd.”

Melissa Fleischut, president and CEO of the New York State Restaurant Association, applauded the move, but said more must be done to assist business owners who have faced nearly a year of financial hardship.

“While these are small steps toward reopening the economy, allowing shuttered businesses to welcome back customers is a step in the right direction, nonetheless,” she said. “We will keep doing our part to keep our employees and diners safe so we can continue to make progress toward a full reopening as soon as possible.”