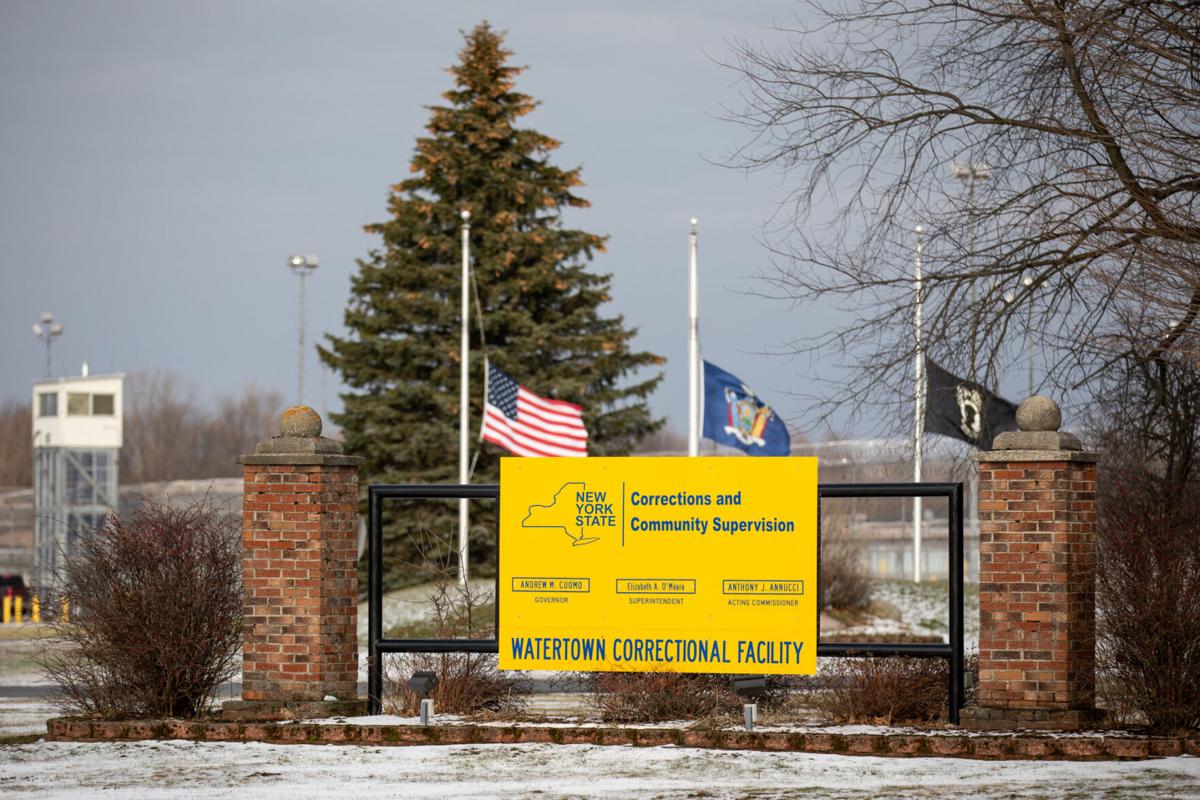 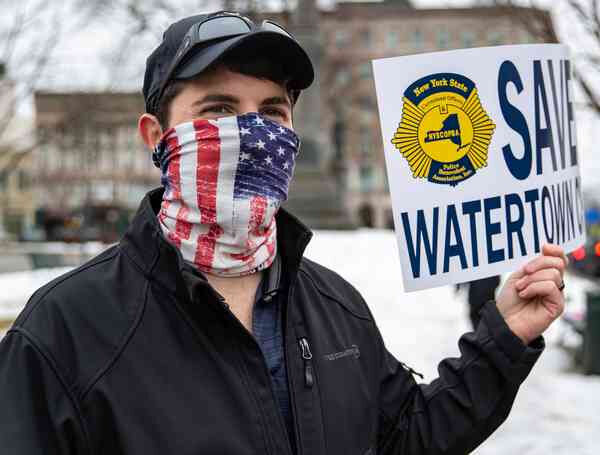 Corrections officer Ken Aubin was among several Watertown Correctional Facility employees who rallied against the closure of the facility in January in Public Square. Kara Dry/Watertown Daily Times

Corrections officer Ken Aubin was among several Watertown Correctional Facility employees who rallied against the closure of the facility in January in Public Square. Kara Dry/Watertown Daily Times

After the facilities close, all equipment, including vehicles, desks and chairs will be transferred to other state correctional facilities or surplused by DOCCS. Utilities will be shut off after the buildings are emptied, the water pipes are drained and the buildings will be closed and boarded up in an effort to protect the state assets for sale and reuse, according to the department.

“Upon closure, DOCCS will begin the decommission process in order to protect the State assets for potential re-use,” according to a statement Saturday from DOCCS spokesman Thomas Mailey. “The Department will work with the Office of General Services and the Empire State Development Corporation in an effort to identify a re-use for the (facilities).”

The state estimates the closures will save $89 million and comes on the heels of significant population decline in state prisons.

The state has reduced its incarcerated population by about 12,100 New Yorkers since Jan. 1, 2020, according to DOCCS.

Lawmakers representing communities where the prisons are located have largely pushed back against the quick closures, which were announced four days before Christmas last year.

Cuomo included language in his 2021-22 executive budget proposal to “allow the state to act expeditiously to right-size and eliminate excess capacity with 90-day notice,” for two years.

Assemblyman Joseph Giglio, R-Gowanda, and a ranking member of the Correction Committee, pointed to a section former Republican Gov. George Pataki signed into state Correction Law Section 79-a in 2005 that requires officials announce a prison closure at least 12 months in advance.

“We believe that law should not have been circumvented almost 10 years in a row,” Giglio said. “This budget, it’s our feeling, it was wholly inappropriate. There’s no reason to circumvent the 2005 law in the budget process. There’s no crisis here.”

The state is expected to close an undetermined number of additional prison facilities over the next two years. Various state officials would not say how many or where.

“This is the first time he’s asked for two years instead of one year in the budget, which I find very concerning,” Giglio said. “We believe there should be the 12-month notification requirement so these prisons can be closed in a very orderly fashion.

“You’re dealing with people’s lives,” he added, “communities and safety and you don’t do it in a haphazard fashion without our input and without following the original law.”

Cuomo has included language in four past state budgets since taking office in 2011 waiving the 12-month requirement and permitting the closure of facilities with 60- or 90-day notice.

Republicans requested the two-year window be removed from the budget proposal and for state officials to adhere to the 2005 law. The law mandates all affected employees, labor organizations and local governments be notified of the closure of a correctional facility, annex or special housing unit at least one year in advance by certified mail.

Empire State Development Corporation implemented the $32 million Economic Transformation Program in the 2014-15 budget to promote economic development initiatives in communities affected by the 2014 closure of four facilities, according to the report from Assembly members, distributing a portion of appropriated funds to localities.

Giglio argued closing facilities too quickly impacts the safety and security of inmates and corrections staff, which include unionized officers and civilian employees.

“During that time period two prisons were closed along with the three announced at the end of 2020,” Miller said.

The number of assaults on DOCCS staff and related incidents remained flat in 2019 and 2020, according to the department.

DOCCS Acting Commissioner Anthony Annucci said during a bicameral legislative budget hearing Feb. 10 closing facilities has no correlation with the increased incidents of violence and assaults on corrections officers.

“There should be a plan,” Giglio said. “The numbers have come down, but at some point, there’s a right sizing and you don’t just keep closing facilities down ... We can right-size this a lot better under the one-year rule and get this right. Then maybe we can rejuvenate some of these places and make them useful in the community they’re in.”

Gowanda and Watertown are all-male, medium-security facilities. The Clinton Annex is all-male and maximum security. The three facilities had about 700 total incarcerated individuals at the time of the closure announcement.

This week’s closures will bring the total number of New York prisons to 50. Twenty-three facilities have closed since 2009, according to DOCCS data.

“Closures were in the budget approved in April 2020 and there was no quick turnaround as they were delayed because of the pandemic,” state Budget Division spokesman Freeman Klopott said in a statement Saturday. “Budget negotiations are ongoing, however, the state’s prison population has declined 52% since 1999 to 34,500, making it possible for the state to close 18 prisons since 2011 to generate almost $300 million in savings. It just makes sense to continue to have the flexibility to assess prison populations and find savings for taxpayers.”

“The budget allowed for the department to close facilities without specifying a number,” Mailey said of the 2019-20 spending plan.

Nine facilities closed in 2011, two in 2013 and four more in 2014. Closures resumed with two facilities in 2019, including Livingston Correctional Facility in Livingston, according to DOCCS data. The closures removed 8,051 beds from the state prison system impacting 3,497 employees.

DOCCS and other state officials study many factors before closing a facility, Annucci said in February, including infrastructure and proximity to other facilities to move staff.

“There are minimal maintenance costs associated with the closures and the decommissioning of the facilities,” Mailey said, but did not answer inquiries for specific annual upkeep costs. “The Clinton Annex will be maintained in a state of ready.”

Giglio criticized Cuomo and his administration for not releasing what the associated maintenance costs were.

“Once a facility is moth-balled, what happens to that property?” Giglio asked. “The state of New York still owns it and there’s an expense associated with it. Just less inmates, and we’re going to remove the state employees. There’s no talk about what happens next. We still own them.”

Giglio urged for the state to return to following Pataki’s right-sizing policy he said allowed nonviolent offenders to participate in rehabilitative programs and be released early.

Assemblywoman Carmen De La Rosa, D-Manhattan, and member of the Correction Committee, represents constituents and communities with a majority of Black and Latino New Yorkers who have been targeted by the criminal justice system.

“When I walk into prisons, the first thing that jumps out at me is the fact the people sitting behind bars look like me,” De La Rosa said Saturday. “They look like my constituents. When I hear about the economics (of prison closures), it just recertifies in my mind that we are making economic engines out of mass incarceration for people of color, for New York and throughout the nation.”

The assemblywoman argued people are quick to make arguments about the financial harms of closing prisons without considering investing into programs or opportunities for incarcerated people to change while in prison and have restorative justice.

The prison system should not be a job generator, nor should facilities be kept open for the sake of employment opportunities, De La Rosa added.

The department offered each employee the opportunity to transfer or be reassigned to an available, funded, vacant position at another correctional facility or state agency.

“DOCCS is working closely with the various bargaining units to provide staff opportunities for priority placement via voluntary transfers and will receive priority in terms of employment at other facilities or other state agencies as a result of the formal Civil Service process that is followed with the closure of a correctional facility,” Mailey said.

The Watertown facility is an all-male, adult prison and consists of 90 buildings with 51 inside the compound and 39 outside the compound, according to a 2016 National PREA Resource Center audit. The Dry Hill prison employs roughly 400 people total, 212 of whom are unionized, or members of the NYSCOPBA. Most staff will commute or move to work at facilities in Cape Vincent or Gouverneur, but newer officers will be relocated downstate.

De La Rosa, who has visited prisons across the state, supports the governor’s budgetary waivers to allow for faster prison closures.

“I don’t know what the justification is,” she said of keeping prisons open for a full 12 months. “If we’re seeing a significant decrease in the population and (staff) in those prisons can be easily distributed in the system, why keep an entire facility open? If a prison isn’t being used at capacity, so it is a budget issue. It is a cost savings.

“I would support, in the budget, the closure of these prisons. I think as a committee we can still have robust conversation and those legislators can register concerns for support as we would during any other time during legislative session.”The governor ultimately hands down the decision to close a state prison facility. The state Legislature is not required to vote to authorize a closure.

Assemblyman Billy Jones, D-Plattsburgh, sponsors a bill in the Assembly to require the state Legislature’s approval to close a correctional facility. His district includes the Clinton Correctional Facility and its annex.

Representatives with Cuomo’s office referred questions to the state Budget Division, and did not answer inquiries about why the governor has repeatedly waived the Correction Law mandate, the benefits of a faster prison closure or the number of facilities, including which, they are considering closing within the two-year waiver in the upcoming budget proposal.

Representatives for the Assembly Majority Conference did not return multiple requests for comment.