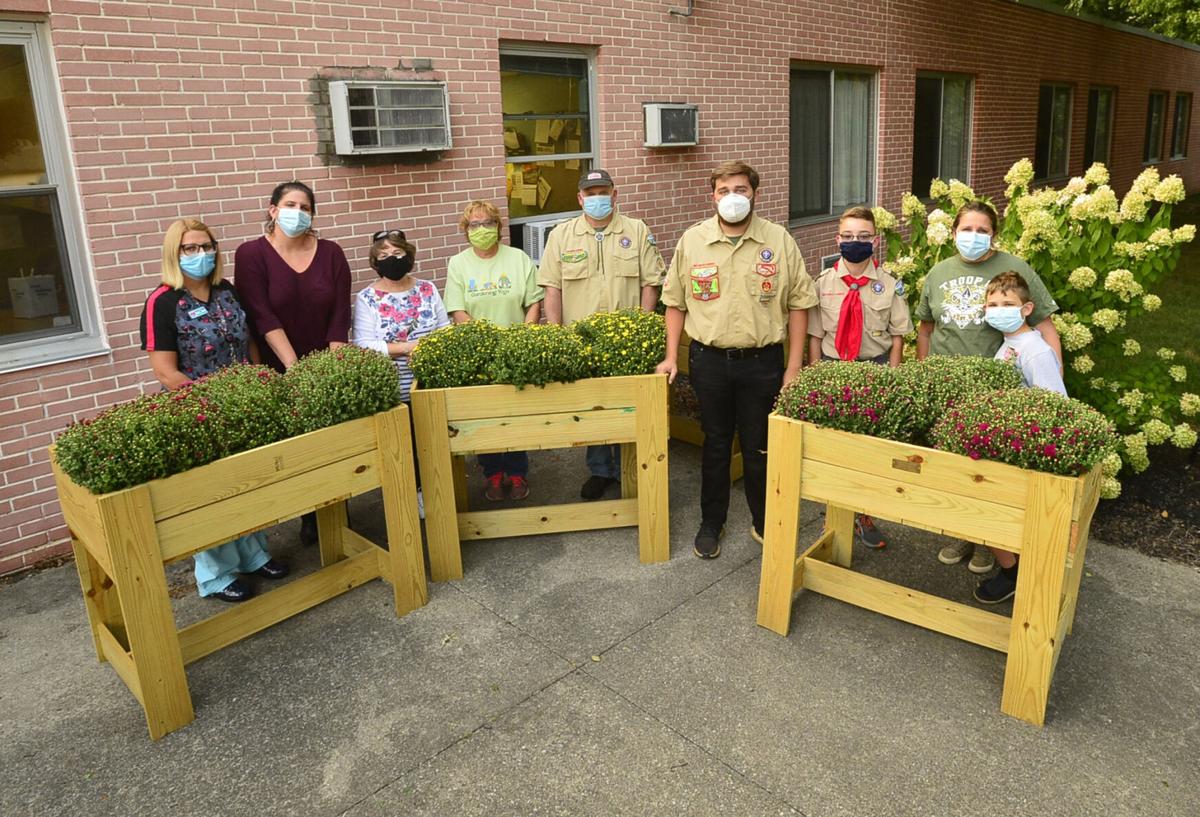 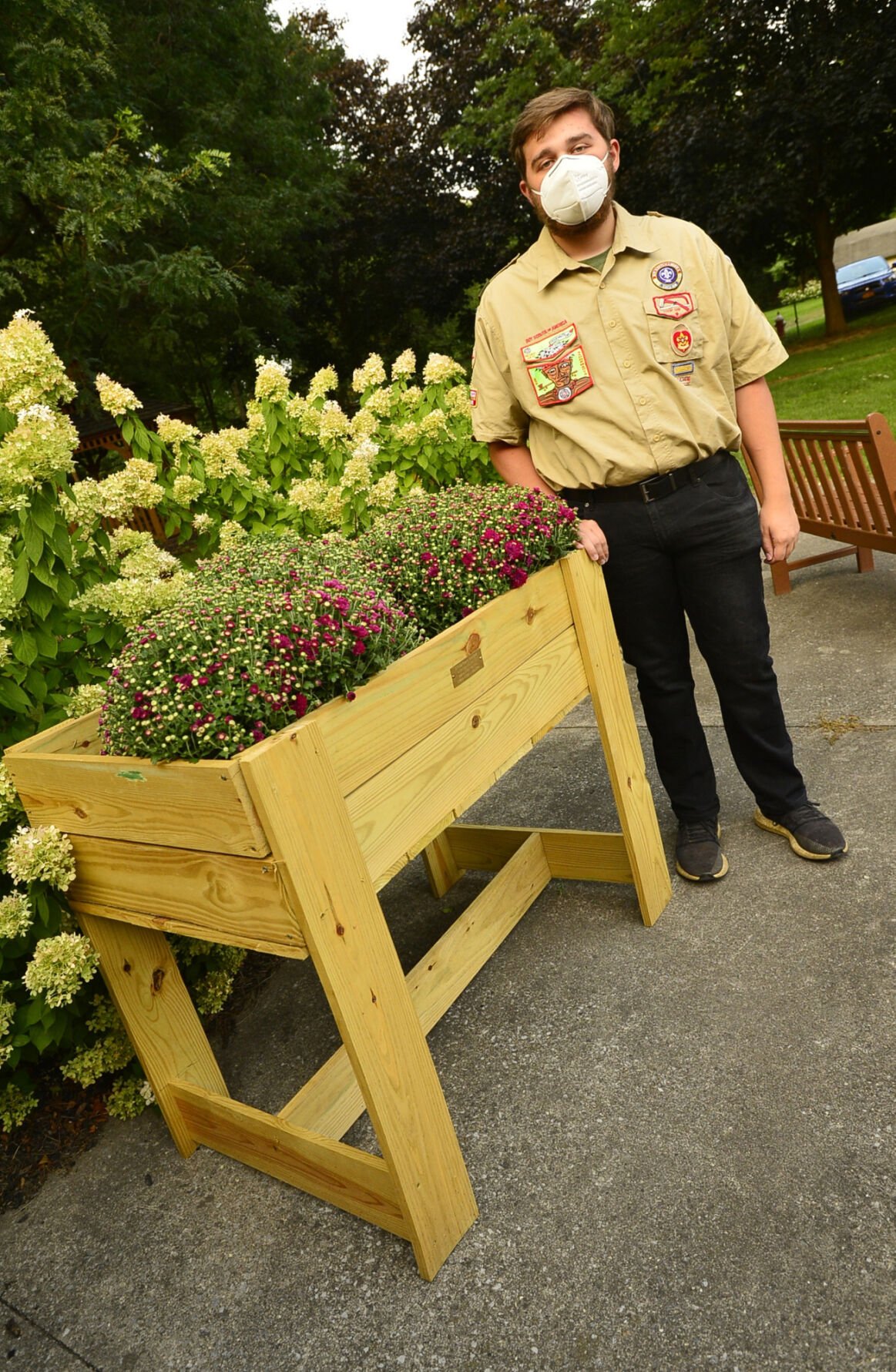 Samuel Zerillo, an Eagle Scout from Le Roy, stands next to a planter box at Le Roy’s Village Green. Samuel led the construction of four boxes as part of an Eagle Project. 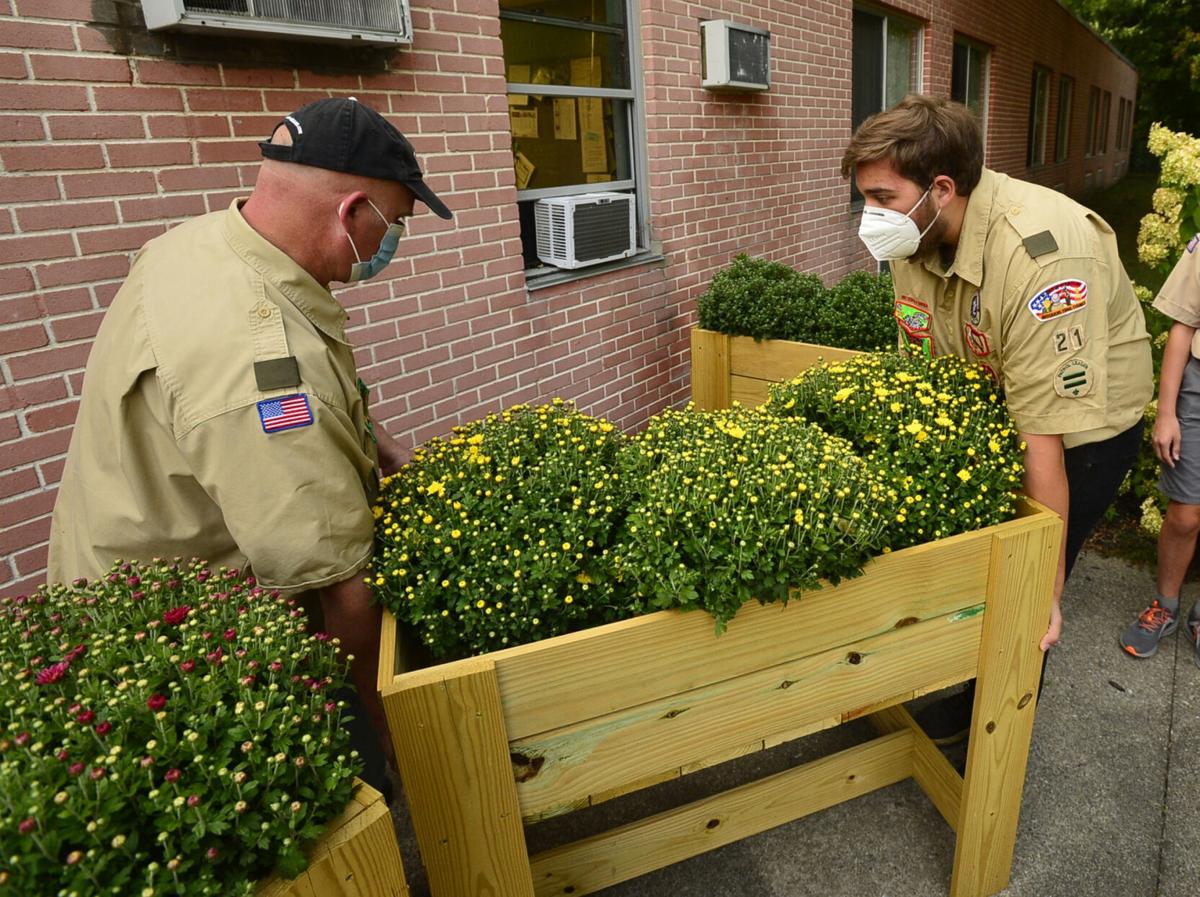 Mark Gutman/Daily News At right, Eagle Scout Sam Zerillo  moves one of the planter boxes into position with his father Phil Zerillo on Wednesday at the Le Roy Village Green.

Samuel Zerillo, an Eagle Scout from Le Roy, stands next to a planter box at Le Roy’s Village Green. Samuel led the construction of four boxes as part of an Eagle Project.

Mark Gutman/Daily News At right, Eagle Scout Sam Zerillo  moves one of the planter boxes into position with his father Phil Zerillo on Wednesday at the Le Roy Village Green.

Le Roy Boy Scout Samuel Zerillo remembers his grandmother Judith Brown’s love of gardening. He also remembers that it was something she missed while she was a resident of the Le Roy Village Green nursing facility on Munson Street.

Other residents won’t miss out on the peaceful pastime following the dedication Wednesday evening of Samuel’s very personal Eagle Project – four, stand-up wooden planter boxes that will allow residents to be able to plant, weed and plant some more of their own flower gardens on the courtyard behind the Village Green.

“Something Grandma Judy really missed was being able to garden in the fall and spring,” he said. "She was a member of the garden club in Le Roy and had gardens all over her property when she lived at home I’m glad I was able to go and do something in her memory.”

“The residents have lost a lot due to COVID-19,” said Village Green Administrator Samantha Vagg. “These kinds of projects reinforce how much community support there is for the residents."

Samuel said he hoped the project would bring enjoyment to Village Green residents for many years to come.

“The idea of doing flower boxes in the courtyard was to give the residents an opportunity to garden in the spring and fall like thy did at home. It gives them something to do here that may make them feel more at home. It gives them the ability to keep doing this they used to do," said Samuel, a soft-spoken, thoughtful speaker. “It gives them a little slice of the outdoors.”

For now, the deep boxes are filled with containers of fall mums – bright yellows and deep red amid green vegetation. In the spring, the boxes will be filled with dirt and residents will be able to plant flowers.

Members of Samuel’s troop, Boy Scout Troop 6021 in Le Roy, will join residents in the project and members of the Town and Country Garden Club of Le Roy will assist the Scouts with reviewing flower choices and help with the plantings.

“We’ll change it up so there is always something in bloom,” said Rita Wallace, a member of the garden club.

With the project complete, Samuel will be formally recognized with the rank of Eagle Scout during a Court of Honor at a later date.

To earn the rank of Eagle Scout, a Boy Scout must complete an Eagle Project. The project, which benefits their community, school or any religious organization, give the Scout an opportunity to “plan, develop, and give leadership to others,” according to Boy Scouts of America.

The Scout begins planning and developing project ideas upon achieving the rank of Life Scout, and must complete the project by the time they turn 18 years old.

Samuel had considered several Eagle Projects, which he noted was “a big step in any Boy Scout’s journey.”

“There were many big ideas,” he said, “but then unexpectedly COVID hit so we had to get a little more creative with ideas.”

He had been learning toward a larger-scale project of refurbishing the track at Notre Dame High School, from where he graduated this summer. But the arrival of the COVID-19 virus to the region closed the school building and facilities, and prevented access to administrators to plan the project.

Samuel said his father and Scoutmaster Phil Zerillo was a big help in guiding him through the process of taking on the Eagle Project and helping figure things out. It was his mother, Heather, the art director at The Daily News, who helped Samuel decide on doing a project for the Village Green. Grandparents on both his mother’s and father’s side had spent time there as residents.

Samuel, along with other Boy Scouts – including some from other troops – and friends spent a day cutting all the long boards into various lengths. Jeff Beaumont, a local carpenter, taught the boys how to saw and drill the boards together.

Samuel said he learned a lot from completing the project.

“It taught me a lot about leadership. I’ve been in leadership roles before in the Troop,” he said, noting time as senior patrol leader and assistant patrol leader. “But it was hard to direct people, especially friends not in Scouts and tell them to buckle down and what to do. It's sometimes harder when you're close with people.”

Samuel, a student at John Carroll University in Cleveland, has been in Boy Scouts since second grade, advancing from Tiger Scout to Cub Scout, through Webelos and Boy Scout. He became a Life Scout about four years ago and says that becoming an Eagle Scout is the pinnacle of Scouting.

“For most boys, they’re done after Cub Scouts. Boy Scouts are not really a priority, and some are teased for staying with it,” he said. “I’ve always it enjoyed. I enjoyed camping and learning new skills. It wasn’t just about earning merit badges.”

He said he has developed a close bond with friends who have stayed with Scouts. Daniel Mark, a member of the current Troop, helped Samuel through the cutting and construction phases of the planter project. Another Scout, Dakota Sica, helped with the cutting after Samuel had previously helped Dakota with his Eagle Scout project.

“There a tight bond, a community that forms among the Scouts,” Samuel said. “I think the more we stay with it, the more we are able to discover.”