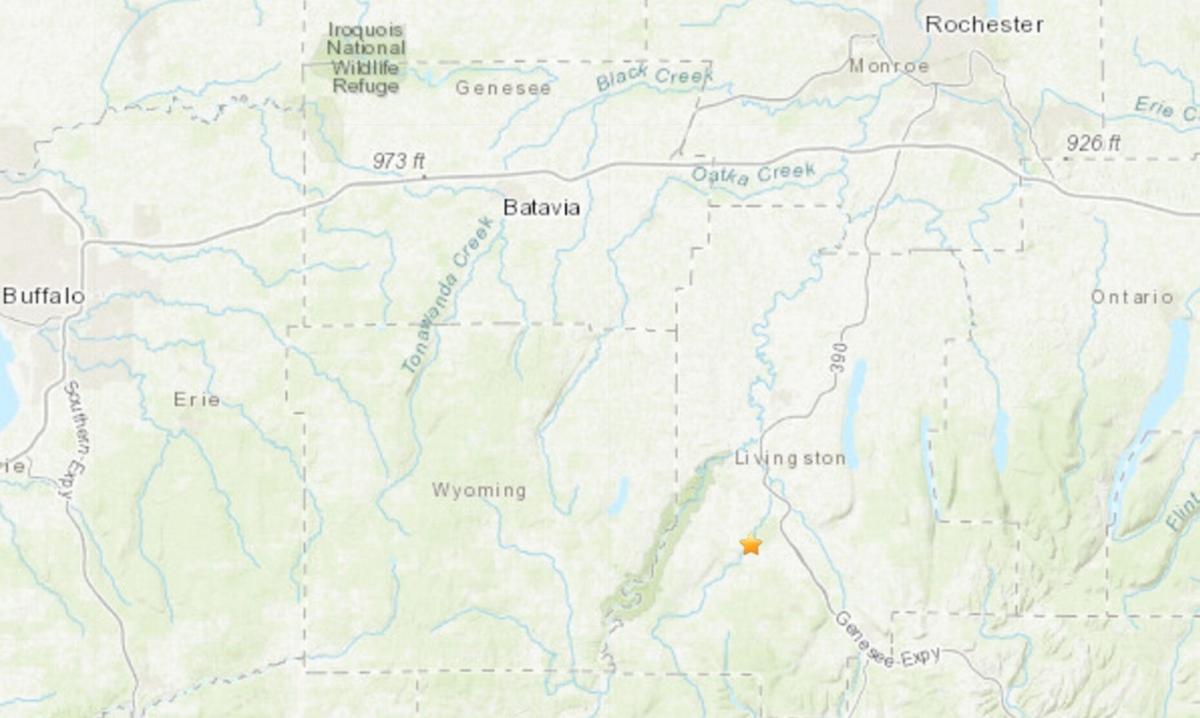 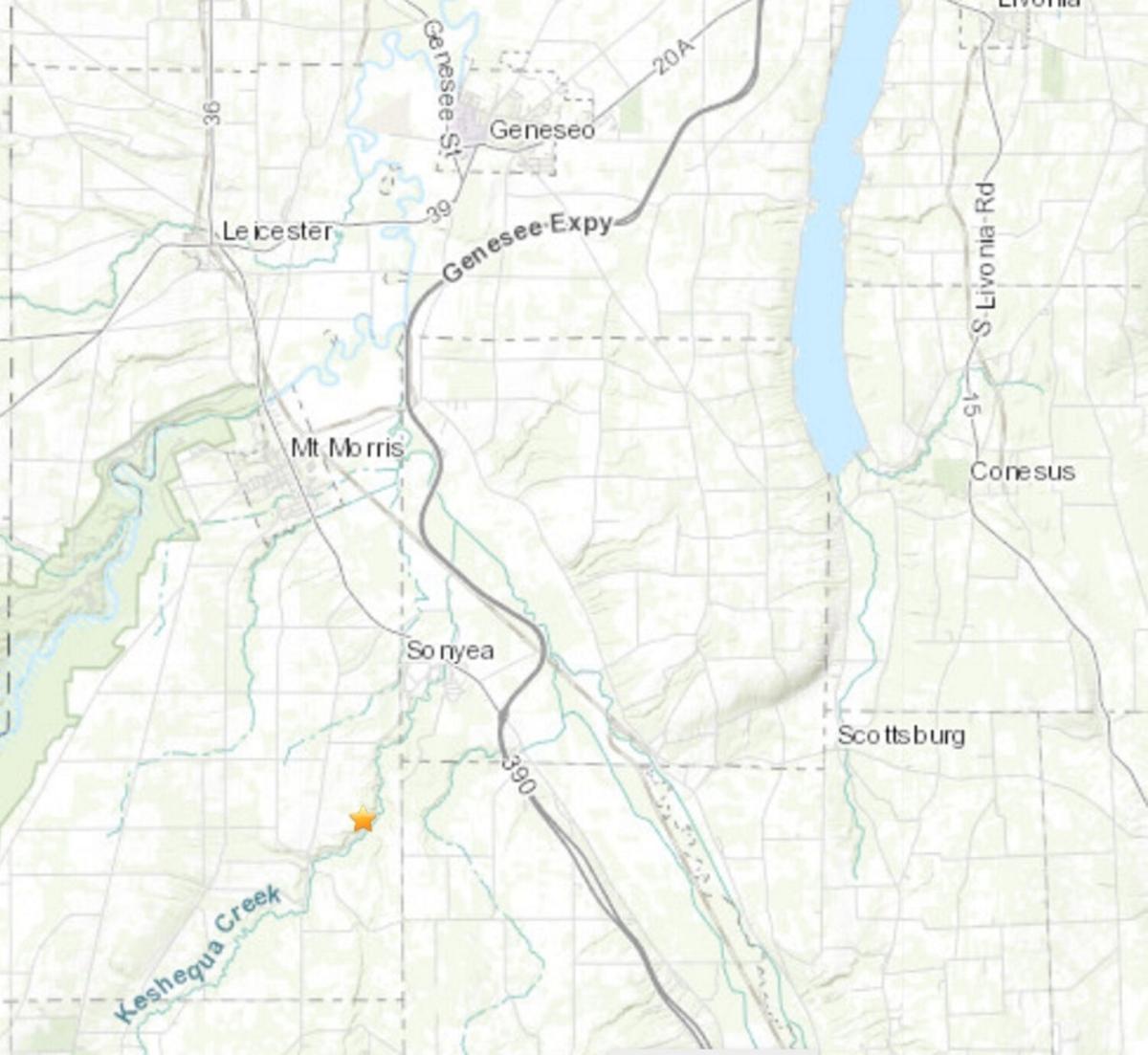 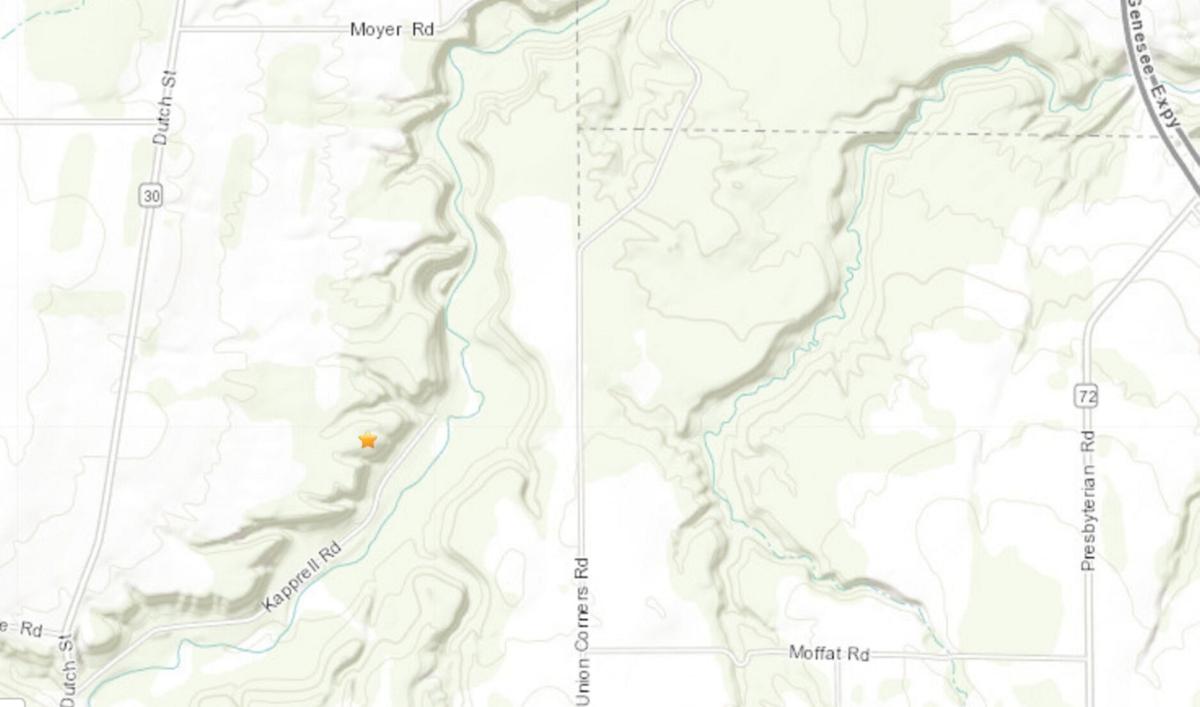 Residents from Perry to Avon reported homes shaking, dishes rattling and large booms across the region Thursday night following an earthquake that had its epicenter in Livingston County.

The U.S. Geological Survey reported that a 2.4 magnitude earthquake occurred about 8:40 p.m. about 2 kilometers, or 1.2 miles north-northeast of the hamlet of Tuscarora in Mount Morris. The location along Gulley Road is east of Letchworth State Park.

The epicenter was 3.7 kilometers, or 2.3 miles from the surface, according to USGS.

“It was nuts. A huge boom and shaking,” Angela Nacol Purcell wrote on the Livingston County News Facebook page. Purcell identified her location as Tuscarora/Mount Morris.

Many area residents felt something. Jenny Jacobs of Springwater, in a post on the Livingston County News Facebook page, described the sensation as “more like a shockwave.”

“Windows moved and felt a shake in the floor,” she wrote.

Abbey Irene in Avon wrote that the house shook and her family thought their barn had collapsed. Others who heard the loud noise thought a tree had fallen, or a car crashing into a residence.

“She was right! Give that girl an A1,” Weaver said.

Livingston County Sheriff Thomas J. Dougherty said in a tweet that the Sheriff’s Office was “fielding a lot of calls about a loud noise and a shake to the ground.”

Dougherty said Thursday night the Sheriff’s Office was continuing to investigate, but preliminary reports pointed to the earthquake.

“Please know there is no cause for alarm and we are continuing to verify the event as such,” he said in the tweet.

Witness reports posted on the USGS and other earthquake sites reported that shaking lasted as little as 1 to 2 seconds to as long as 15 seconds.

Jason Smith said in Dansville “it shook the whole house. Windows rattling & all.”

While Kathy Mannix in South Avon thought a tree had fallen on the roof of her home.

In Groveland, Linda Sinatra VanderMallie said she “didn’t know if it was an explosion or an earthquake.”

But at the same time, other residents in those communities indicated that they felt nothing.

A possible explanation may be found in a May 23, 2013, story in the Livingston County News – in which residents shared their experiences following an earthquake with an epicenter near the Ontario-Quebec border that was felt some 325 miles away in Livingston County. In the story, Dr. Richard Young, a Distinguished Service Professor of Geological Sciences at SUNY Geneseo, said location is a primary factor in who might experience earthquake tremors from hundreds of miles away. Those in the valleys of Livingston County – which have more sediment than bedrock – are more likely than those in other areas to experience a shake or rumble from an earthquake.

“So when the ground shakes, it’s more like Jell-O. Rocks are rigid, sediment is not,” Young explained in the story.

Western New York is not immune to seismic activity, though quakes felt in the region are, for the most part, a curiosity.

But for scientists, data from the quakes – including who didn’t feel it – can be used to improve seismic maps. Such maps indicate that Western New York is known to be an active area, but the earthquakes are not a high problem.

Livingston County is east of the Clarendon-Linden fault line and in recent years felt quakes with epicenter’s in Shawville, Quebec; Louisa, Va., and near Ottawa, Ontario.

The most recent earthquake with an epicenter in the region was a 1.9 magnitude temblor about 6 kilometers, or 3.7 miles, west of Bergen on Feb. 9.

Other notable quakes in the region include a 2.6 magnitude tremor on March 29, 2020, north of the Lake Ontario shoreline, about seven miles north of the town of Yates; and a 2.9 magnitude quake on June 6, 2009, with an epicenter 3 miles south-southeast of Attica, and 5 miles south of Alexander.

USGS data list three other quakes in Livingston County, all in the vicinity of Mount Morris: a 2.0 magnitude quake on March 23, 2012, near Perry and Dutch Corners roads; a 2.5 magnitude quake near Mount Morris Geneseo Road on Jan. 25, 1991; and a 3.6 magnitude event March 12, 1994, that was originally thought to be an earthquake but was later determined to be the result of a “rock burst,” or collapse, at the former Akzo Noble Salt Mine in Retsof.

A significant quake in Attica on Aug. 12, 1929, measured about 5.6 on the Richter Scale and remains the largest record in Western New York, according to USGS historical data.

About 250 chimneys and several buildings were heavily damaged, according to reports at the time. Many cemetery monuments fell or where twisted. Dishes fell from shelves; pictures and mirrors fell from walls and clocks stopped. An increased flow at the Attica reservoir was also noted for several days following the quake, and damage was reported in Batavia. The 1929 earthquake was felt throughout most of New York and the New England states, northeastern Ohio, northern Pennsylvania and southern Ontario.

For the U.S. Geological Survey interactive map of earthquakes in New York State, go to https://tinyurl.com/pkbf89b4.