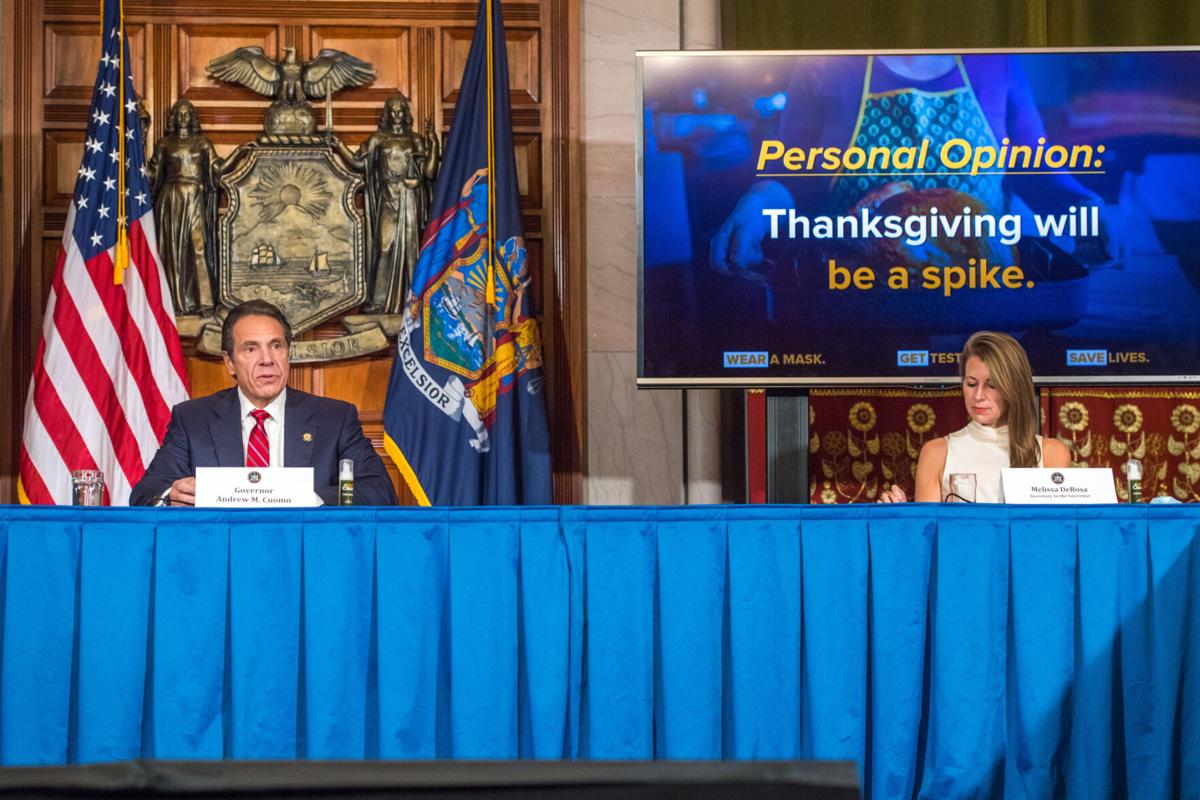 Gov. Andrew Cuomo speaks about the likelihood Thanksgiving gatherings will cause a spike in COVID-19 infections, with Secretary to the Governor Melissa DeRosa, right. 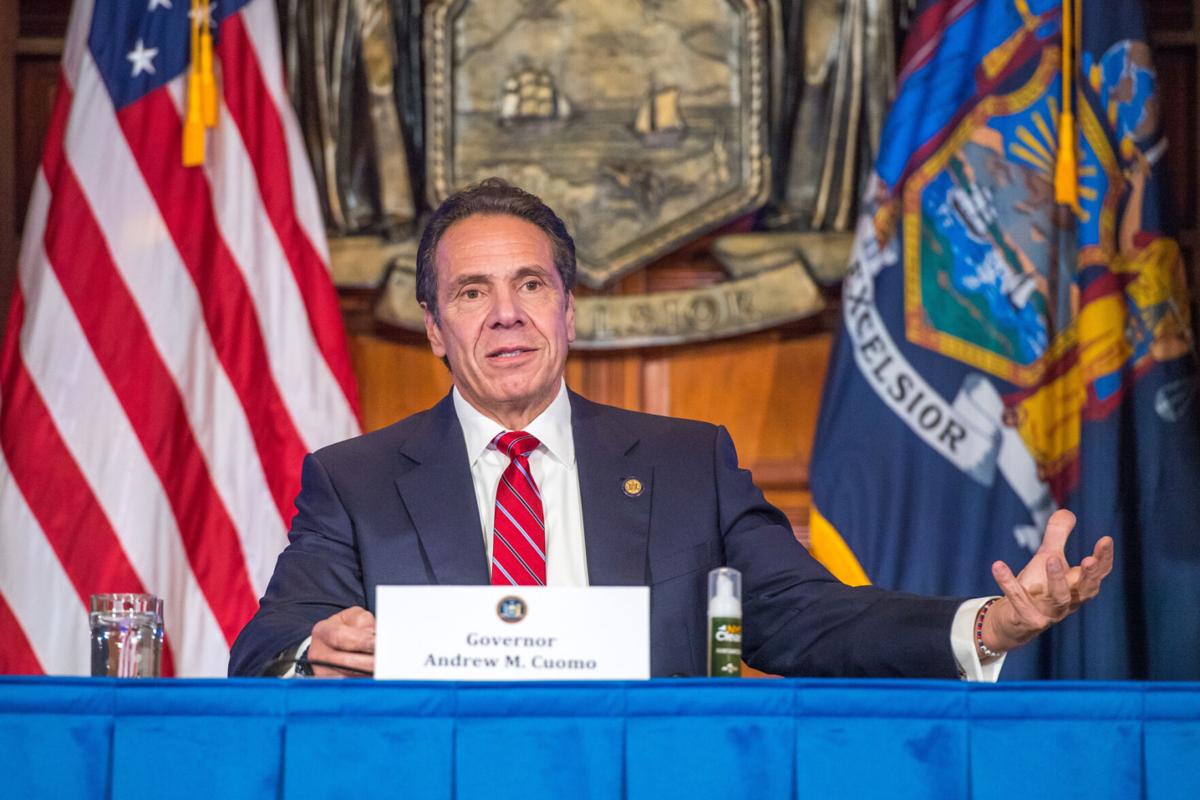 Gov. Andrew Cuomo speaks about the likelihood Thanksgiving gatherings will cause a spike in COVID-19 infections, with Secretary to the Governor Melissa DeRosa, right.

BUFFALO — Much of Erie County advanced to an “orange zone” designation on Wednesday as COVID-19 rates continued to increase in Western New York.

The announcement by Gov. Andrew Cuomo on Wednesday brings targeted and painful shutdowns in an attempt to get the numbers lower.

High-risk, non-essential businesses such as gyms and personal care establishments will again be closed starting Friday in the affected areas. Restaurants will be limited to outdoor dining only, with a maximum of four people per table.

Schools in the affected areas will go remote-only classes on Monday, while gatherings will be limited to 10 people.

“Western New York never lived the full pain of COVID’s wrath,” Cuomo said Wednesday afternoon during a coronavirus briefing in the state Capitol in Albany. “They read about Long Island, they watched it on the TV news, but the numbers were never as bad in Western New York. I believe they didn’t have the same level of fear.

“... It’s those areas which are astronomical compared to the rest of the state,” he added of the region’s mounting COVID clusters. “They’re dramatically higher than anywhere else.”

Five municipalities in Erie County, or Buffalo and the surrounding Western New York metropolitan areas, have the highest developing coronavirus numbers in the state, with 9.8% in Hamburg, 9.4% in Lancaster and 7.5% in Orchard Park, with 7.3% in Buffalo and 6.8% in Tonawanda.

Other towns in eastern Erie County, such as Wales, Alden and Holland are now designated as yellow zones, bordering Genesee and Wyoming counties.

Parts of Niagara County —near northern Buffalo specifically — will also enter a yellow precautionary zone, which starts at 2.5% positivity.

Such designations have worried GLOW region officials, which have seen their own COVID-19 numbers increasing and are urging residents to help avoid microcluster designations and the resulting restrictions.

The issue isn’t limited to Western New York, which — followed the Finger Lakes Region that includes the GLOW counties — currently has the worst coronavirus statistics statewide.

New York City target zones, which have existed in parts of Brooklyn and Queens since early October, expanded yellow warning areas in parts of the Bronx and through Astoria, Queens, on Wednesday.

Officials on the state’s Coronavirus Task Force have worked to tackle budding COVID microclusters with thousands of targeted tests, contact tracing and isolation of infected residents.

The good news, Cuomo said, was lingering yellow zones in Broome and Orange counties were eliminated Wednesday. Areas of Brooklyn in an orange zone were downgraded to yellow, which shows the microcluster approach works.

“Following the rules works,” he said. “It’s very simple — if you socially distance and you wore a mask and you were smart, none of this would be a problem. It’s all self-imposed. If you didn’t eat the cheesecake, you wouldn’t have a weight problem.”

New York has the fourth-lowest coronavirus infection rate of 50 U.S. states at a seven-day average of about 2.9%, with Vermont the lowest at 2%, and Hawaii and Maine close behind at 2.02% and 2.15% new COVID cases, respectively.

“You’re higher than New York was when it was ambushed eight months ago? How can that possibly be?” Cuomo asked. “Remember, we were ambushed [by COVID-19] coming from Europe. Nobody told us. It exploded — it was like sending a bomb.”

New York’s statewide positivity rate peaked at 46% on April 8. The states surging now were not as hard-hit by the coronavirus when it first arrived at the beginning of the year.

“These are the states that did not get hit hard in the spring ... that was eight months ago,” Cuomo said. “There can be a sense of denial that we’re immune from this. ‘That was New York. That was New Jersey — that’s not happening here in our state. It’s not happening to us.’ ...Yes it is, and it can.”

The governor expects cases to exponentially surge nationwide in the coming weeks — especially with next week’s Thanksgiving holiday. Private gatherings are limited statewide to 10 people or fewer by an executive order Cuomo signed earlier this month.

“You will see a tremendous spike after Thanksgiving — that’s my personal theory,” he said. “If you don’t have a real fear about COVID, you’re going to come together. It’s going to happen because it’s human behavior.”

Cuomo has dissuaded his 89-year-old mother, Matilda Cuomo, from holding a small Thanksgiving dinner with his siblings and spouses.

Another wave of the novel coronavirus largely swept Canada after the nation’s Thanksgiving holiday Oct. 11.

“You family sounds safe, doesn’t it? Your home sounds safe,” the governor said. “Our dining room table at Thanksgiving sounds safe. ... No, you won’t be safe. It’s an illusion. My sister loves me. My sister could infect me — not maliciously, but accidentally. It’s counter-intuitive. What I thought was the safest place and the safest situation in my home at my table with my family ... that’s a dangerous situation.”

Of the state’s 10 regions, Western New York had the highest positivity Wednesday at 5.1%, with yellow or orange microcluster rules threatening the Finger Lakes with 4.3% positivity. The Capital Region increased to 2.3% new infections Wednesday, with 3.7% in Central New York and 1.8% in the North Country. The Southern Tier has the state’s lowest infection rate with 1.2% positive.

New York City, the original epicenter of the original virus outbreak this spring, has fluctuated between 2.5% and 3%. All New York City schools will indefinitely transition to remote learning starting Thursday, Chancellor Richard Carranza announced to school officials in an email after 2 p.m. Wednesday, because of the city’s COVID-19 positivity rate reaching 3%.

The shutdown will affect more than 300,000 children in more than 1,700 schools after resuming classes in late September.

State hospitalizations surged to 2,202 patients Wednesday, or an uptick of 78.

In other matters, Cuomo said Wednesday he will not accept an upcoming pay raise next year as New York state faces an estimated $50 billion budget deficit over two years after the state Commission on Legislative, Judicial & Executive Compensation recommended no raises for elected officials for the next four years in a report Monday.

The commission declined to provide raises for state judges last year when the state had a budget deficit of about $6.7 billion.

Cuomo said both he and members of his cabinet will not take a raise given the state’s budget deficit, adding Wednesday he will issue an executive order to stop the salary increase.