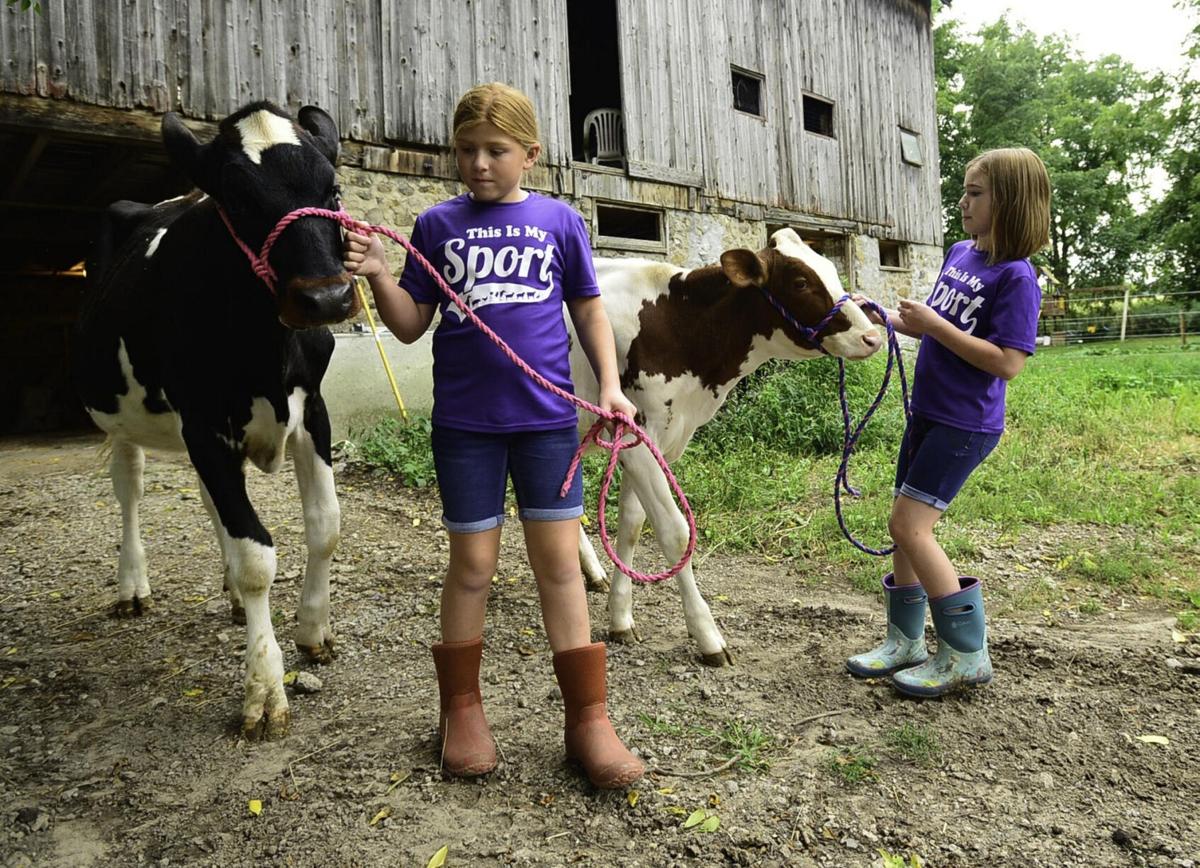 Mark Gutman/Daily NewsChloe Lamb, 10, and her sister, Claire Lamb, 8, lead their calves out of the barn on Wednesday at their home. Chloe’s calf is named Mocha and Claire’s is named Rosebud. 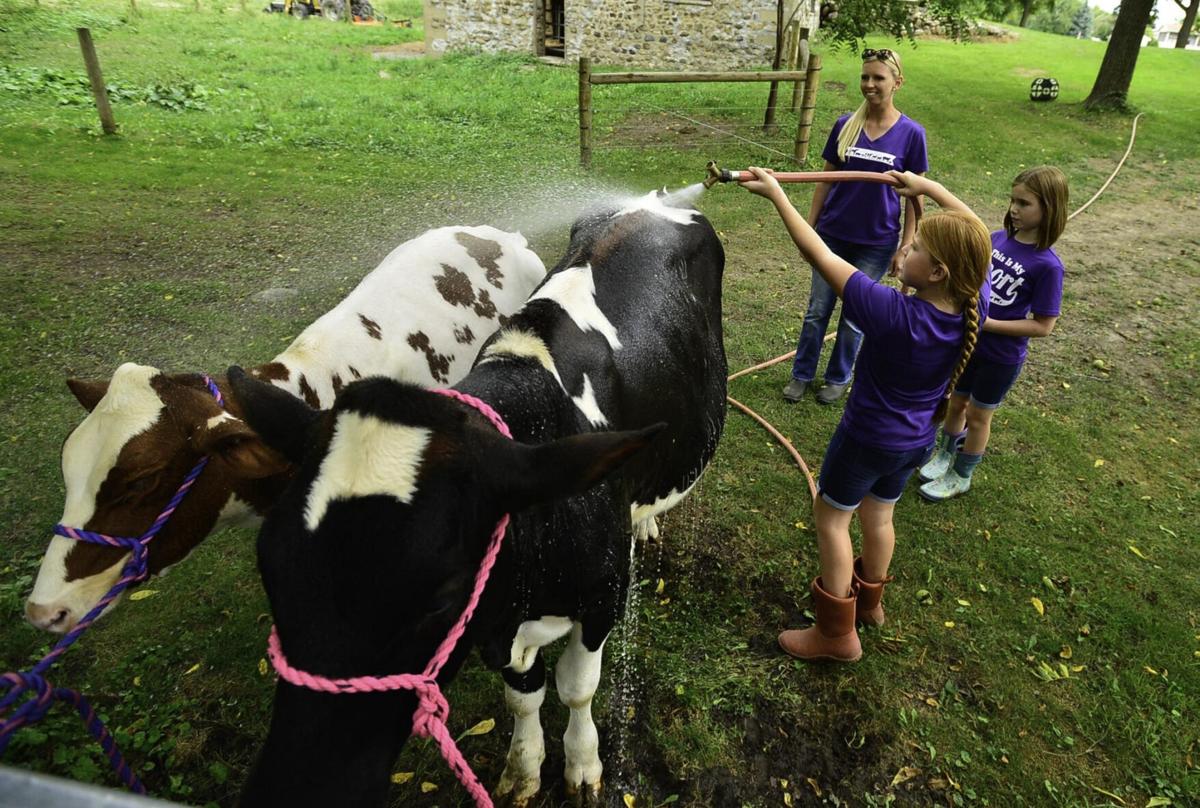 Mark Gutman/Daily NewsChloe, left, and Claire Lamb wash their calves on Wednesday at their home. Their mother Kendra Lamb, is looking on. 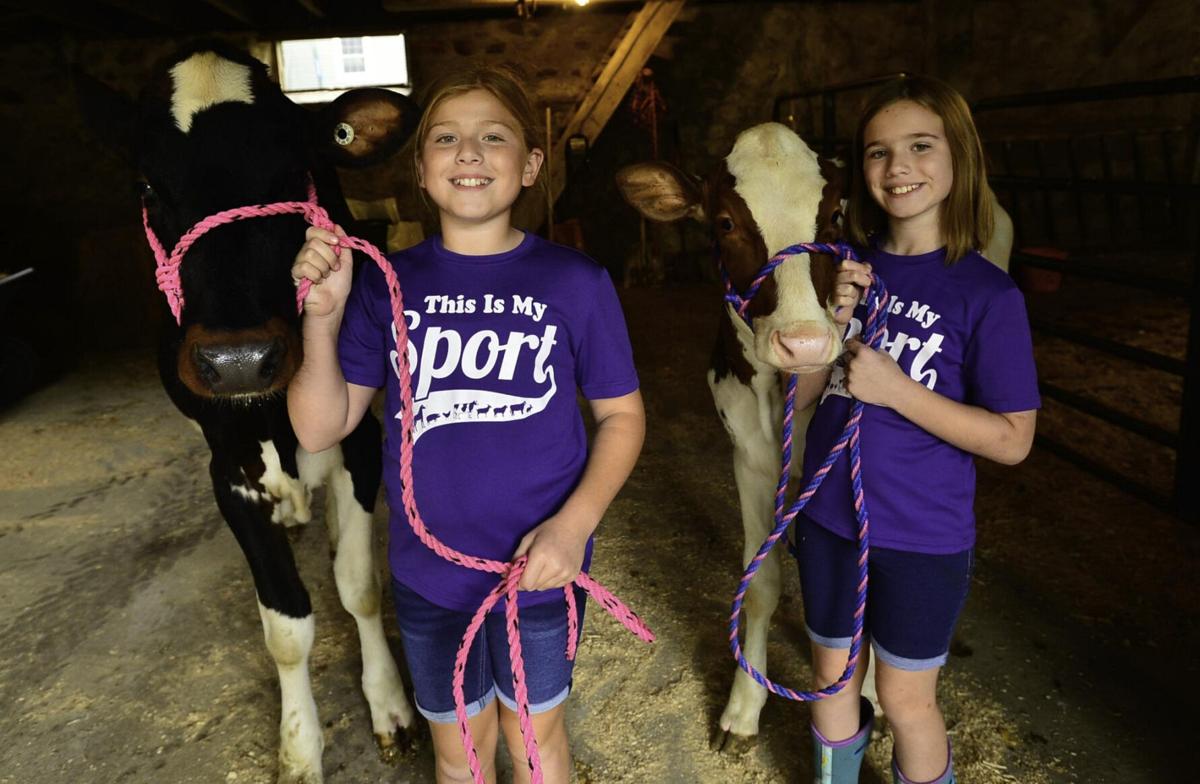 Mark Gutman/Daily NewsChloe Lamb and Claire Lamb stand in the barn on Wednesday at their home with their calves. 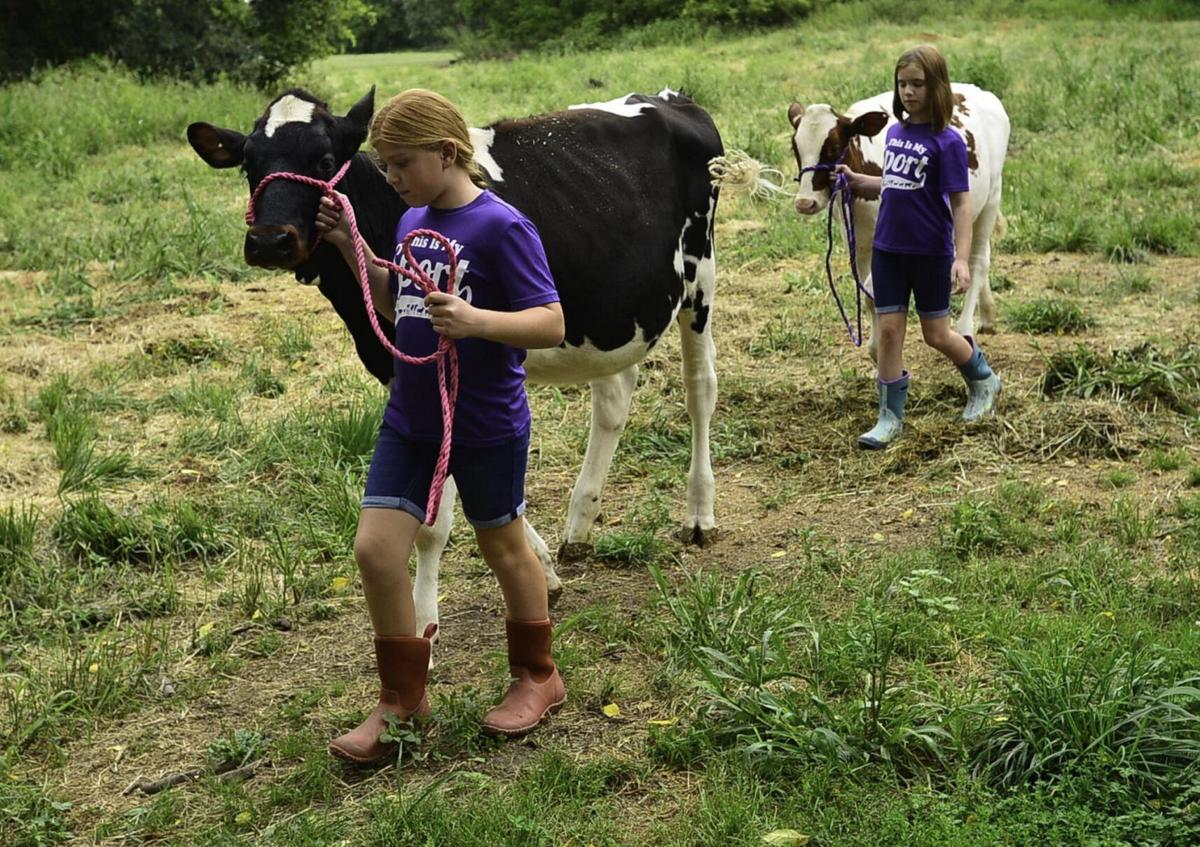 Mark Gutman/Daily NewsChloe and Claire Lamb 8 walk through the pasture at their home with their calves, Mocha and Rosebud.

Mark Gutman/Daily NewsChloe Lamb, 10, and her sister, Claire Lamb, 8, lead their calves out of the barn on Wednesday at their home. Chloe’s calf is named Mocha and Claire’s is named Rosebud.

Mark Gutman/Daily NewsChloe, left, and Claire Lamb wash their calves on Wednesday at their home. Their mother Kendra Lamb, is looking on.

Mark Gutman/Daily NewsChloe Lamb and Claire Lamb stand in the barn on Wednesday at their home with their calves.

Mark Gutman/Daily NewsChloe and Claire Lamb 8 walk through the pasture at their home with their calves, Mocha and Rosebud.

OAKFIELD — Chloe and Claire Lamb had the chance to be on camera this week for the New York State Fair’s Virtual Dairy Barn Experience and they appeared to have a good time.

Chloe, 10, shrugged off any nervousness and said she was excited to take part.

“It was fun. I like being on video. I told my family about it,” she said.

It helped that the video wasn’t live and that she got a few tries during the filming, she said.

Her sister said she was probably a little excited and nervous about being on video. When was Claire the most excited?

“Probably when I found out I could sprinkle her with the hose,” she said, looking at Chloe.

Chloe said among the calls and messages they got from people who saw the video was a voice mail message from a college friend of her mother’s. Her mother, Kendra Lamb, said her friend is a dairy farmer in California.

“She called to say she thought the girls did an amazing job on the video and she was so impressed, and to tell them she was very proud of them,” Kendra Lamb said. “Lots of good stuff like that — they’re getting a lot of kudos.”

Chloe said she loved the attention.

“I just liked ... everything about it, really,” she said.

Chloe said she has been showing cows since she was 3.

Chloe said she and her mom have been to the New York State Fair.

“Last year, I went to a show in Harrisburg (Pa.),” she said. That was for the All-American Dairy Show, at which she showed Robin, her and Claire’s red and white Holstein winter calf.

Kendra Lamb said, “She did great for her first year. That’s the premier national youth show.”

Both have shown calves at the Genesee County and Erie County fairs.

Claire said she participated in the Spring Preview at the Erie County Fairgrounds in 2019.

“It was definitely higher competition than Genesee County,” she said. “I showed Robin.”

Claire, who has also been showing calves since age 3, said her favorite part of showing calves was probably when she leads the way. She said she gets compliments.

Kendra Lamb said in a competition, when a judge awards place winners in a class, he talks about why he placed the class the way he did.

“Claire told me that after the Erie County show, she said ‘I really like when I’m leading, because then the judge is saying nice things about me,” Kendra Lamb said.

Their portion of the video was filmed Aug. 17 with the introduction in front of the Lamb Farms, Inc. sign and the footage with the girls and their calves at home. The entire video, which also featured Country Ayre Farms in Dewittville, N.Y., and Tiger Lily Holsteins of Oxford, N.Y., was posted Monday on the American Dairy Association North East Facebook page.

Emma Andrew-Swarthout, director of dairy industry image for the American Dairy Association North East, talked about how the Lamb girls ended up being featured in the video.

“Around New York state, we have a lot of awesome youth that show cows and I knew that Chloe and Claire both normally show cows and are really passionate about it,” she said. “I was trying to make sure I selected farms throughout New York state, so it was a pretty easy ask because I knew they’d do a great job ...”

The girls were given a video script to review, Andrew-Swarthout said.

“Throughout the video, I would prompt the script a little bit and ask them questions, just because we really wanted it in their words. How do they care for their cows? What’s their favorite part about showing cows?” Andrew-Swarthout said.

The lesson they gave about how to wash calves was pretty natural to them, Kendra Lamb said.

“I think one of the most rewarding parts of the project was allowing youth who normally work so hard to all year round on their show cows and they get to take them to fairs,” she said, noting that they weren’t able to do that this year.

Andrew-Swarthout said, “It was a lot of fun to work with the girls. They had fun. Just to bring a little piece of that fair that they normally experience to life, even if it was video, and that they could share that with all the viewers on the Facebook page. There are a couple of friends that grew up showing cows and they said these two explained how to wash a cow better than they would have. These two broke it down so nicely and they’ve ()the friends) spent years in the industry.”

Kendra Lamb said, “I think there were a lot of comments that people had no idea how many steps there were to washing a calf. It’s more complicated than you might think.”

With fairs being canceled this year, the family misses not having the interaction with the public,

“The girls love to invite people to pet their calves and the calves are used to the children,” she said.