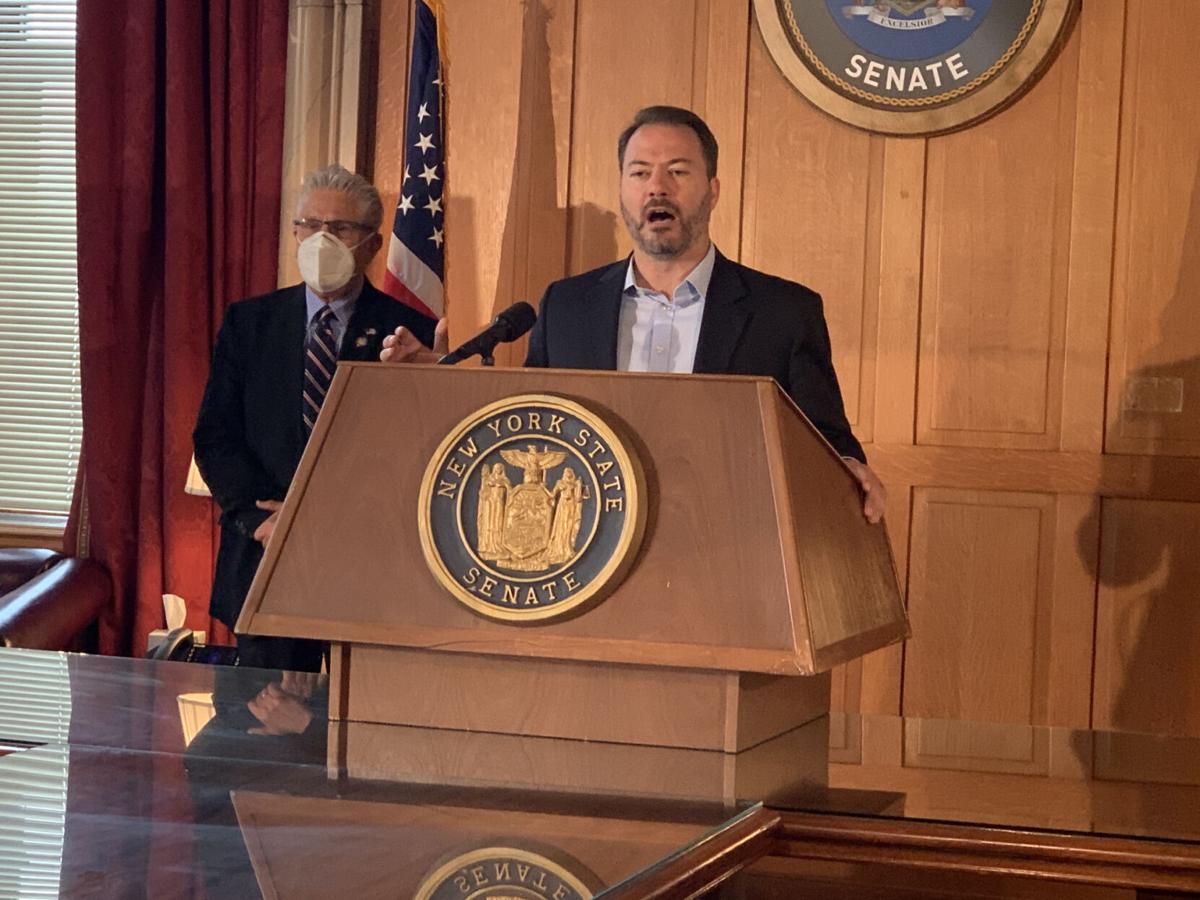 Kate Lisa/Johnson Newspaper Corp. Senate Minority Leader Rob Ortt, R-North Tonawanda, said in the Capitol on Wednesday the call for the state to publish an accurate number of the state’s COVID-19 nursing home deaths, including hospital fatalities, is not political. 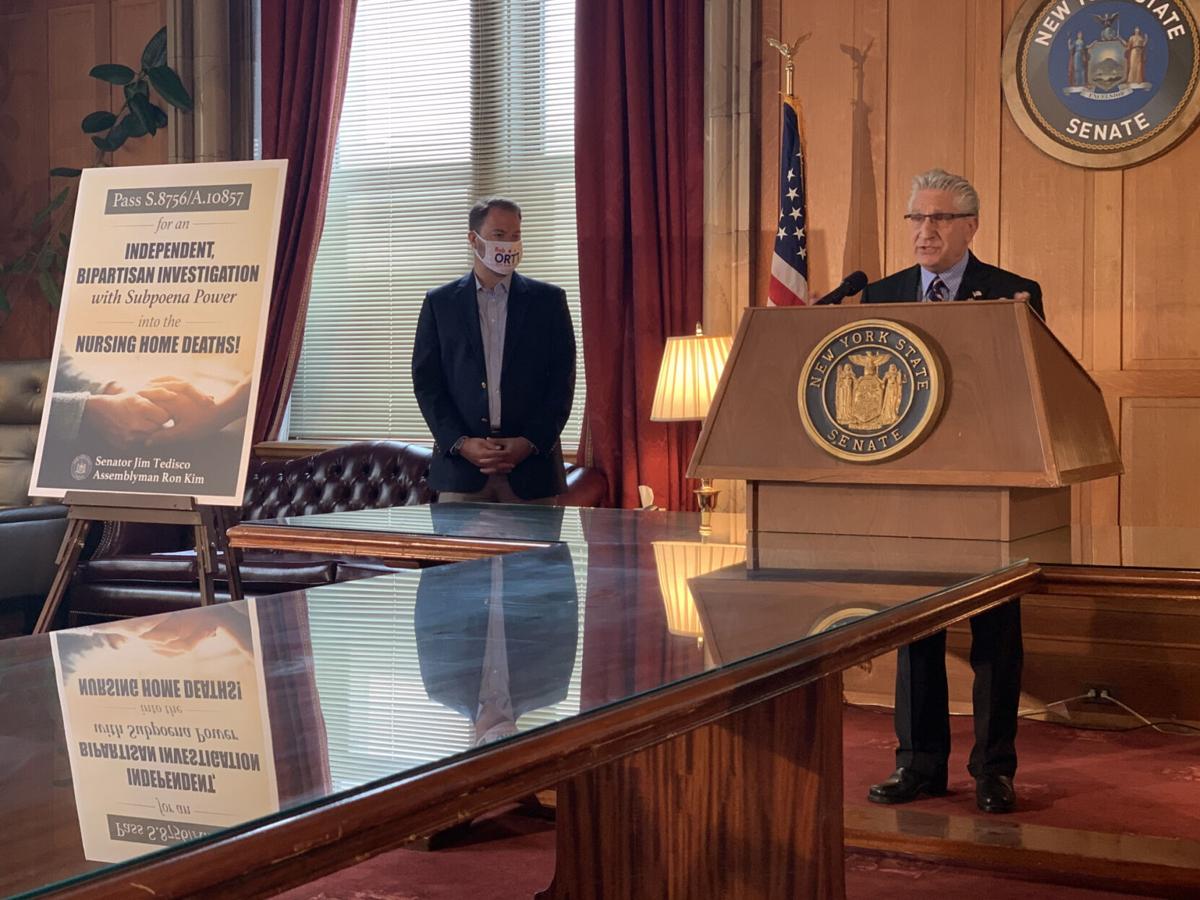 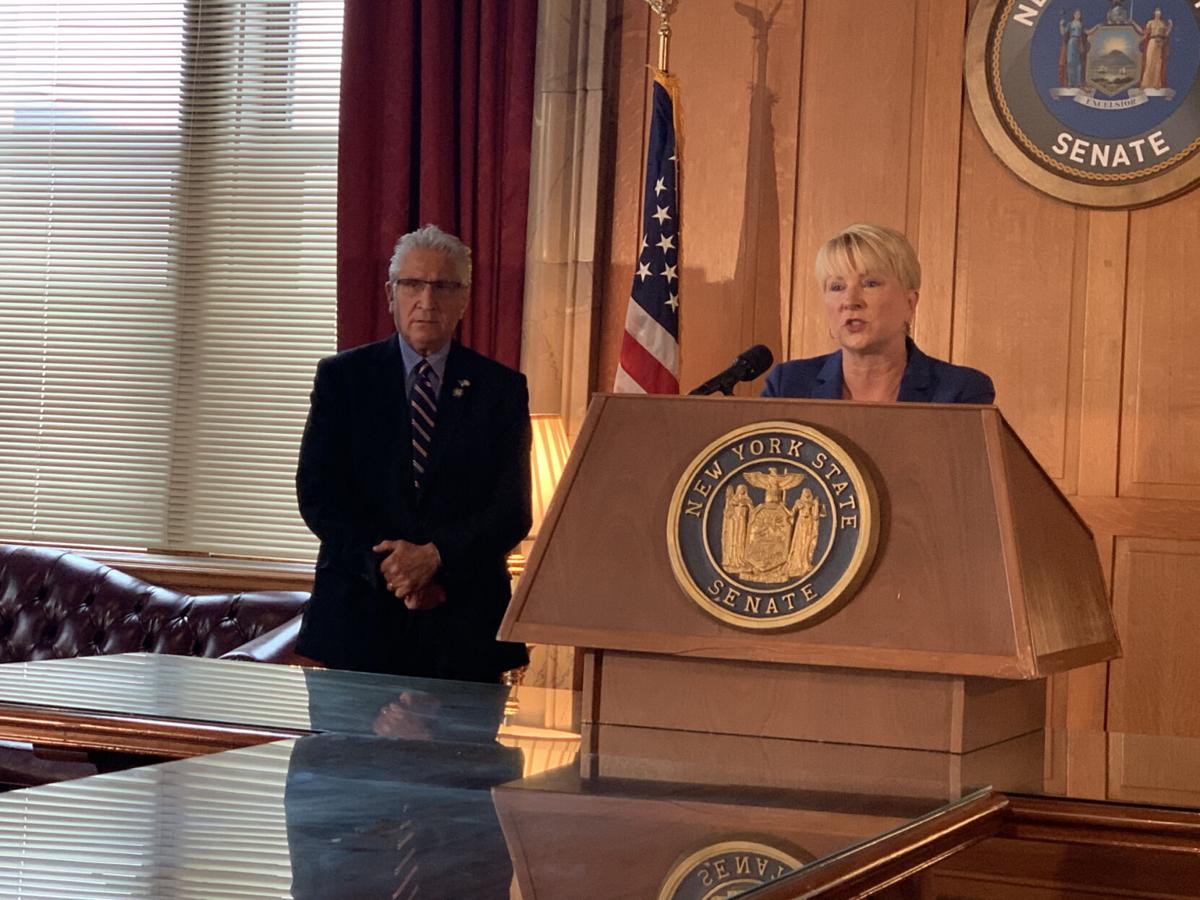 Kate Lisa/Johnson Newspaper Corp. Senate Minority Leader Rob Ortt, R-North Tonawanda, said in the Capitol on Wednesday the call for the state to publish an accurate number of the state’s COVID-19 nursing home deaths, including hospital fatalities, is not political.

ALBANY — Senate Republicans launched a statewide petition Wednesday to pressure the Legislature to subpoena the state Department of Health to publicly release an accurate number of New Yorkers who died from COVID-19 in adult care facilities and nursing homes.

“There are millions of New Yorkers who want answers,” Ortt said. “This petition drive is a great initiative. ... It’s the right thing to do. We haven’t gotten answers and we deserve the answers.”

Tedisco did not specify a number of signatures lawmakers intend to collect before sending the list to Democrats in the Senate and Assembly majorities.

“I want a lot of signatures — I want to let the governor know it’s not only the senators and assemblypersons who want this,” he said.

New York has reported more than 6,500 nursing home deaths since the pandemic struck in March, but the state has only tallied the deaths of those who died in the homes, not hospitals. Critics have said the current figure doesn’t provide a full picture of the issue.

Lawmakers, officials, advocates and family members have repeatedly called for an independent investigation and for the state DOH to release an accurate count.

“I think they have the numbers,” Tedisco said. “It shouldn’t take until the pandemic is over.”

State DOH Commissioner Dr. Howard Zucker did not answer questions or provided vague responses to questions during a bicameral hearing Aug. 3 about how many coronavirus-positive nursing home patients were transferred to and died in New York hospitals, citing frequently changing numbers as the pandemic continues.

Gov. Andrew Cuomo and Zucker declined to be interviewed at a subsequent legislative hearing Aug. 10.

The state DOH absolved itself in a self-published report July 6 on COVID-19 fatalities in nursing homes and found staff and visitors brought the virus into the facilities.

“Fundamentally, we have to get the numbers, learn the lessons and develop a plan for a second wave or whatever we may be facing down the road,” Walsh said. “It might be embarrassing, it might not be embarrassing. It’s facts.”

Republicans said Wednesday the real numbers are necessary to evaluate the state’s COVID-19 protocols in case of a second wave, especially as fall approaches, the weather turns colder and flu season is set to begin.

“It defies logic,” Tedisco added. “The governor keeps talking about the science — you can’t get the science if you don’t get the numbers and we don’t have the real numbers.”

The U.S. Department of Justice announced Aug. 26 it is requesting details on decisions Cuomo and Govs. Phil Murphy, D-N.J.; Tom Wolf, D-Pa.; and Gretchen Whitmer, D-Mich., made during the COVID-19 crisis that may have contributed to the deaths of thousands of people in nursing homes.

The information will help the federal government decide about an official investigation into nursing home deaths under the Civil Rights of Institutionalized Persons Act, which protects the civil rights of persons in state-run nursing homes in New York, New Jersey, Pennsylvania and Michigan, according to the DOJ.

“With this latest publicity stunt, Tedisco and company accidentally revealed that even they think the (U.S. Department of Justice) inquiry is a trumped-up, partisan farce,” Rich Azzopardi, senior advisor to Cuomo, said in response to the petition launch. “The truth may be inconvenient for their politics, but, as has been the case with many other states, it was found that the main source of infection in nursing homes was, through no fault of their own, asymptomatic staffers.”

Tedisco said the lawmakers’ call Wednesday was not political.

“You know what politics looks like,” the senator said. “Every legislator I’ve talked to would like to know the real number of those who died in New York state from a nursing home or lost their lives in a hospital. A large majority of them would like an independent investigation to find out why.”

The extent of the department’s inquiry is unclear: The DOJ may only be able to look at a small fraction of the homes, mainly those that are public facilities. New York has five state-run nursing homes of its 600-plus adult care facilities, or 0.8%. The rest are privately owned.

The federal investigation is helpful, said Tedisco’s Chief of Staff Adam Kramer, but will reveal a miniscule picture of the issue.

“That’s just a small number of the hundreds of nursing homes where this took place,” Kramer said. “It’s not going to give us the full number and the big picture. We want to look at all of them. To just pin it on the feds is more obfuscation and lack of transparency from providing the real numbers.”

Legislators have a constitutional responsibility of oversight of the executive branch, Kramer said.

“It’s not about blame game — it’s just about fulfilling a constitutional duty of oversight and part of that oversight should be to get the real information when the Legislature requests it of the executive branch, and not hiding the truth,” Kramer said. “It’s fulfilling that role of checks and balance.”

Tedisco and Kim’s legislation sits in the Senate Rules and Assembly Health committees.

Introduced this summer, the measures have largely Republican backing, but bipartisan support. Assemblyman Angelo Santabarbara, D-Rotterdam, attended an Aug. 20 press conference and spoke in favor of an independent investigation into the state’s nursing home deaths.

GOP representatives remain unsatisfied with the Legislature’s pair of bicameral hearings on the issue last month, and held their own virtual forum to continue the conversation Aug. 17.

Senate and Assembly Republicans, both minority conferences, do not have subpoena power to call witnesses.