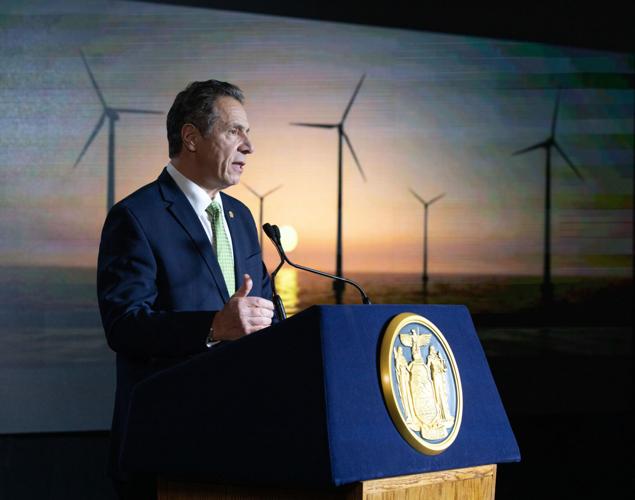 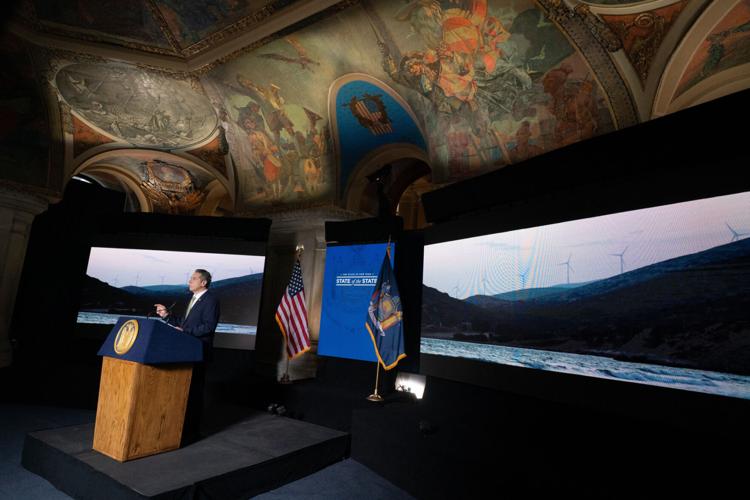 ALBANY — The state will make significant strides to be a national leader in producing green energy to build more than 90 renewable energy projects through 2021 as the coronavirus pandemic has shifted the global economy, Gov. Andrew Cuomo said Wednesday.

The state will contract for 24 new large-scale renewable energy generation projects this year including solar and onshore wind farms, in addition to the construction of 68 other green energy projects — 52 solar projects, 13 on-shore and three offshore wind projects — started over the last five years to transform a carbon-based energy supply. The state’s offshore wind farm projects are among the largest in the nation.

“Climate change is real,” Cuomo said. “Green is good. Sea levels are rising, ice caps are shrinking. California is burning, the Arctic is melting. Deserts are flooding. We have a once-in-a-hundred years storm twice a year. Nature is telling us, ‘Do something, or I will.’ Every thinking person understands this reality.”

The governor continued Wednesday with his third part of his 11th State of the State speech. He is virtually delivering the address over four days from the War Room inside the state Capitol. The annual speech is traditionally attended by thousands of people in Convention Center inside the Empire State Plaza, but is virtual because of the pandemic.

“Gov. Cuomo has taken the necessary actions to position New York as a national hub for the U.S. offshore wind industry, serving as a catalyst to attract significant private investments in the state and create thousands of well-paying jobs,” Doreen Harris, acting president and CEO of the state Energy Research and Development Authority, said in a statement.

Senate Minority Leader Rob Ortt released a statement to express his displeasure about the governor’s announcement for the 200-megawatt solar farm planned for Orleans County. The project does not meet the desires of constituents in that part of the Finger Lakes region, the senator said.

“Today’s announcement of a 200-megawatt solar energy project proposed for Orleans County displays the governor and his administration’s complete disregard for the opinions and desires of Orleans County residents,” Sen. Ortt, R-North Tonawanda, said in a statement Wednesday. “Residents and local officials have been vehemently opposed to industrial energy projects proposed in the past, yet Gov. Cuomo continues to ignore our concerns. Along with disrupting and destroying the quality of life where these projects are placed, they also raise energy costs for local businesses and families.”

More than half of New York’s electricity will come from renewable sources after the large-scale renewable and offshore wind farms are complete, putting the state ahead of its goal to reach 70% renewable energy by 2030.

“We must replace fossil fuel plants with clean power,” Cuomo said. “There are no ifs, ands or buts about it, and now is the time to do it.”

The state started accepting competitive bids Wednesday for companies to build at least three projects to build a green transmission grid. One would start at the Northeast corner of the state and run 330 miles downstate to New York City, one to add capacity from Massena through Marcy down to Rock Tavern in Orange County and build a new underground line to carry power 70 miles to New York City, Cuomo said.

“We’re also working on a line from Leeds, in Greene County, to New York City,” the governor added. “We are open to more proposals besides these three, and we’re asking the market to come up with creative solutions. Time is of the essence so time to completion is going to be a critical factor in our competitions.”

The state will build an 86-mile Smart Path project in the north country; 20 miles of transmission in Western New York to maximize the renewable energy output from Niagara Falls to Elma in Erie County; a 100-mile line from Marcy to New Scotland in Albany County and a 50-mile transmission line from Rensselaer to Dutchess counties to break the state’s current grid congestion.

The pandemic caused many hardships, but also created an opportunity for the state to transform its green economy, the governor said. Many politicians have floated ideas for years, he said, but change was never implemented.

“We are just not making enough actual progress. Why? Because change is hard,” Cuomo said. “We often think we want change. In reality change is threatening and change is disruptive. Change requires discipline. Social change is incredibly difficult.”

State renewable energy investments have brought economic activity to 34 of the state’s 62 counties, will add 6,100 megawatts of clean energy capacity to the state infrastructure and generate a more than $12 billion investment, according to the governor’s office.

“New York must stop relying on other countries to fuel ours,” Cuomo said.

The state secured commitments from in-state companies to build wind turbine components and build the nation’s largest offshore wind program with plans to upgrade five port facilities, including building the first offshore wind tower-manufacturing facility in the U.S. at the Port of Albany.

“The Capital District will become a center for this emerging technology,” Cuomo said. “The project will create 500 construction jobs and will employ 300 highly skilled full-time workers. They will build 150 of these 450-foot wind turbine towers every year. Materials will be delivered by rail and the finished product will be shipped out by river to offshore sites.”

The state will increase usage of the Port of Coeymans in southern Albany County to manufacture turbine components.

A turbine staging and maintenance facility is slated for construction at the South Brooklyn Marine Terminal, with plans to bolster ongoing maintenance out of Port Jefferson and Port of Montauk Harbor in Long Island.

“These obstacles may have been too much to take on yesterday, but today is a new day and what was impossible yesterday is a necessity today,” Cuomo said.

The state will also work to train thousands of workers to meet industry demands by investing $20 million in a new Offshore Wind Training Institute based at SUNY Stony Brook and Farmingdale State College through a partnership with the New York State Energy Research and Development Authority.

The institute will train at least 2,500 New Yorkers for wind and renewable energy jobs. Training is set to begin this summer.

“As we rebuild the post-COVID economy, we must focus on up-and-coming industries that are primed for growth,” SUNY Chancellor Jim Malatras said in a statement Wednesday. “I want to thank Stony Brook University and Farmingdale State College for lending their top of the line facilities and the expertise of their faculty to this important effort. With their help and Gov. Cuomo’s leadership, we will train thousands of workers annually for high-paying green energy jobs and play critical role in New York’s economic recovery.”

The state’s green economy plan will also work to repair social injustices and will include people and communities of color, the governor said.

WATCH: Cuomo to deliver fourth day of State of the State address

Gov. Andrew Cuomo, who is delivering his annual State of the State address in a series of virtual presentations, will present a fourth day of …