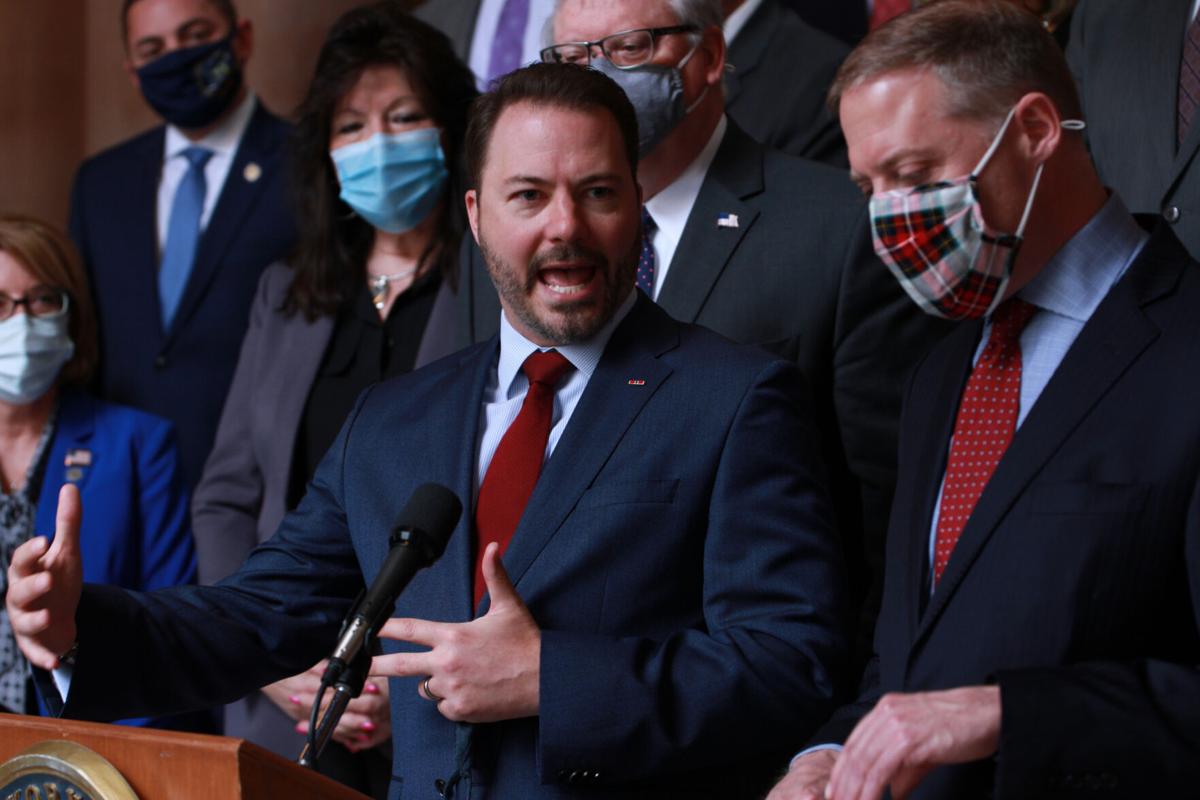 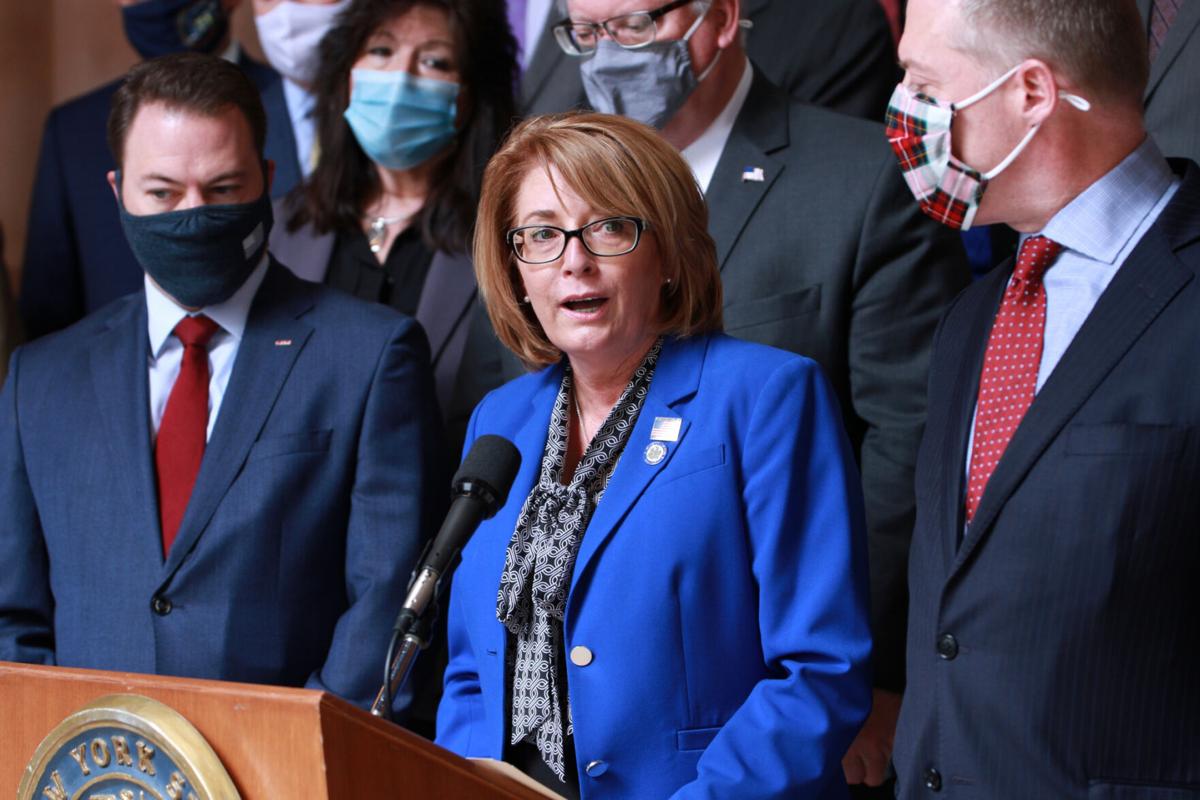 Courtesy of the state Senate Minority conference Sen. Pam Helming, R-Geneva, speaks inside the state Capitol in Albany on Wednesday to demand the state release details to distribute $2.3 billion in federal rent relief to tenants and small landlords struggling during the COVID-19 pandemic.

Courtesy of the state Senate Minority conference Sen. Pam Helming, R-Geneva, speaks inside the state Capitol in Albany on Wednesday to demand the state release details to distribute $2.3 billion in federal rent relief to tenants and small landlords struggling during the COVID-19 pandemic.

ALBANY — The release of New York’s $2.3 billion in federal relief for tenants and small landlords struggling to pay rent or property taxes through the coronavirus pandemic relies on state leaders negotiating the late budget through the weekend.

Legislators did not anticipate debating or voting on legislation related to the 2021-22 budget over the weekend and anticipated observing Sunday’s Easter holiday. Officials said many representatives had left town as of Friday afternoon and did not expect to advance the next state spending plan before next week.

State executives have waited to release a plan and instructions for New York to distribute its total $2.3 billion in federal COVID-19 rent relief for tenants and small landlords.

Other states, including Texas, New Jersey, Connecticut and California, have announced the process and procedure for tenants and landlords to apply for the relief and get the funding moving.

“Here in New York, we have not set up our process at all,” Senate Minority Leader Rob Ortt, R-North Tonawanda, said in front of the Million Dollar Staircase in Albany on Wednesday. “Why on earth would we include this or make this hostage to budget negotiations? If we care at all about small business landlords, we would get this money out. We will get this process set up. ... This is tax dollars — tax dollars the landlords paid into their federal taxes and it should go back to them. The governor (Cuomo) can just call up (Calif. Gov.) Gavin Newsom and ask what they did.”

New York must spend at least 5% of its $1.3 billion in federal CARES Act rental assistance relief, or $65 million, by Sept. 30. The state will receive an additional $1 billion under Congress’ recently passed $1.9 trillion American Rescue Plan.

The remainder of the $1.3 billion will be returned to the federal government if the state has not distributed the $65 million in rental assistance by the end of September.

State Republican leaders drew attention to the ongoing issue in a joint press conference in the state Capitol this week.

“This should be easy,” Ortt said. “All we have to do is set up the process to allow them, tenants and landlords, to apply for this money so we can get it out the door.

“We have heard all about ‘cancel rent,’ (and) ‘we need to forgive rent,’” he added. “We need to give our tenants relief.”

State Republicans in December were largely opposed to and voted against extending the state’s eviction moratorium to May 1.

The state Division of Homes and Community Renewal spent $40 million of an initial $100 million first round. About 90,000 applicants did not receive assistance.

The state anticipates up to an estimated $2.2 billion gap in back rent and similar expenses.

“The Office of Temporary and Disability Assistance is working with its partners in the state Legislature to develop a rent relief program that both meets federal requirements and addresses the housing needs of New Yorkers,” said Justin Mason, a spokesperson with the Office of Temporary and Disability Assistance. “We are working with state and local officials to lay a foundation for this nearly $2.3 billion program. We are crafting a program that will support households experiencing financial hardship and are in rental arrears or are at risk of housing insecurity, with a priority given to the lowest-income households and individuals who are unemployed.”

Mason deferred all other questions to his statement.

The division spent about $40 million of $100 million of the state’s $5 billion in last year’s CARES Act funding to assist about 15,000 applicants in the first round of its COVID-19 Emergency Eviction and Foreclosure Prevention Act of 2020, which the Legislature passed in December to block eviction proceedings through May 1.

State Budget Division spokesman Freeman Klopott referred to Mason’s statement and would not answer repeated questions about how much of the $2.3 billion relief has been moved or spent to date, the qualifications for tenants or landlords to be eligible for the funding or when decisions will be made.

Klopott has said multiple times this week budget negotiations are ongoing, but would not answer other specifics about the topic or nature of the discussions.

About 42% of small landlords are using personal loans or savings to pay for mortgage, property taxes or bills, said Assembly Minority Leader Will Barclay, R-Pulaski.

“Unfortunately, what we do way too often here in Albany is, we drag our feet and we haven’t released these funds,” Barclay said, adding concerns about allocation delays.

“This is about doing what is right. What have we been waiting for? Time is truly of the essence.”

Officials say the details about tenants and small landlords applying for the relief and the state distributing the federal aid is contingent upon passing the state budget.

The state’s 2021-22 fiscal year started at midnight Thursday with one of 10 traditional budget bills passed by the Legislature. Three of the bills were released as of press time Saturday.

State Comptroller Tom DiNapoli said about 39,000 state workers will see a delay in pay if the Legislature does not adopt a budget by Monday.

“We have been working day and night on the budget, and fully expect the funding to be available for state workers to get paid,” Klopott said in a statement.

Republican leaders have chastised Democrats for failing to pass an on-time budget, proposing to raise taxes on New York millionaires and billionaires and the state’s one-party legislative control.

During the Republicans’ joint news conference Wednesday, Sen. Pam Helming, R-Geneva, recalled asking on the Senate floor why $60 million was left unspent in the first round of distributing rental assistance.

“At that time, we had more than 100,000 people seeking assistance, and we got help into the hands of 15,000,” Helming said. “Now, we’re talking about much more funding. The governor and the majority have had plenty of time to put a plan in place to put this money out in a more efficient manner.”

Applicants will see relief in mid-summer now, at the earliest, Helming said.

“...If these landlords go under, we risk losing critical housing stock we desperately need,” she said. “Sept. 30 — the deadline is looming. It’s much closer than we think. It would be a crime to have to send that money back to Washington, D.C.”

Ortt said the federal government may be unwilling to give New York funding in the future if the state fails to use its designated relief by the deadline.

“We might as well just give it to the folks ourselves,” he said. “This is about competence in state government. This should be easy. We’re talking about a $200 billion-plus budget, raising taxes, increasing spending to levels never-before-seen, but we can’t seem to talk about just getting money into people’s hands — tenants and small-business landlords that need that relief more than ever.”