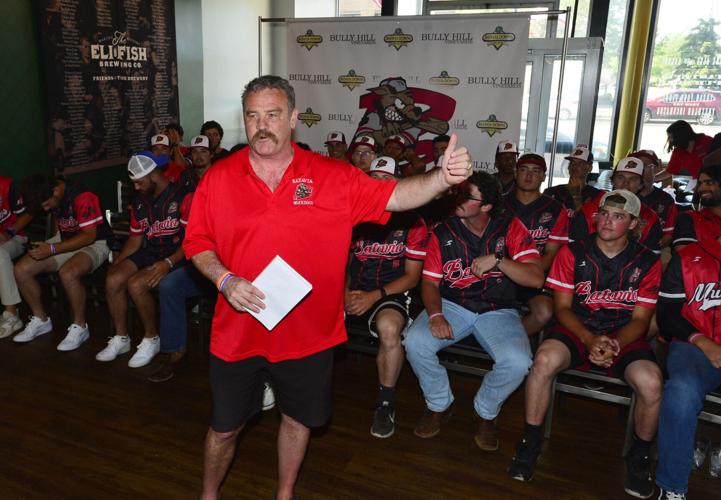 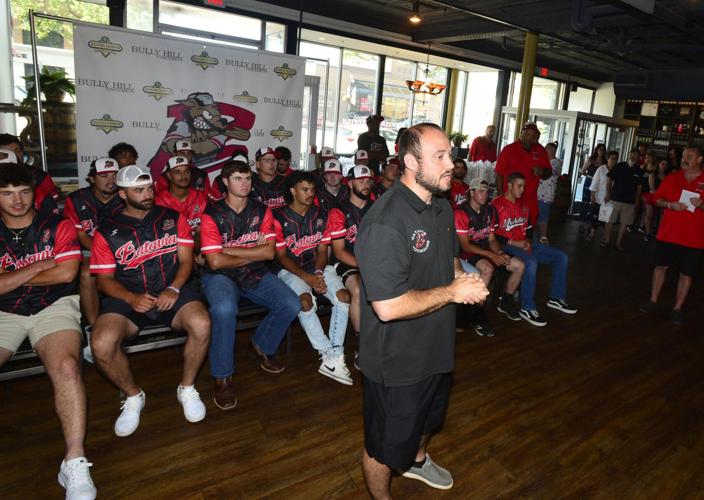 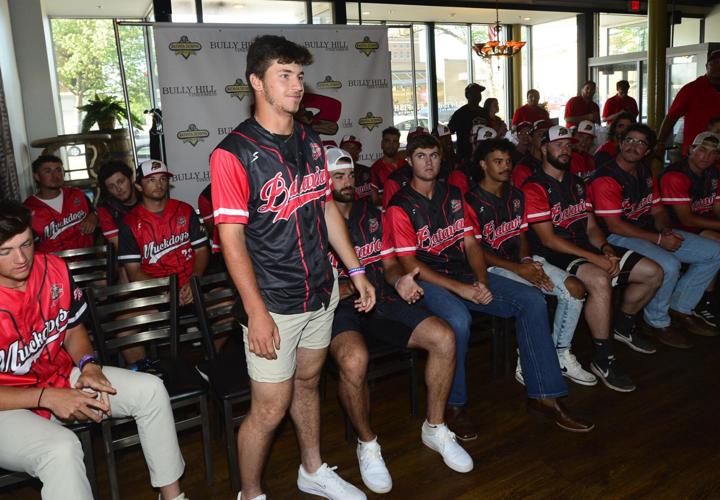 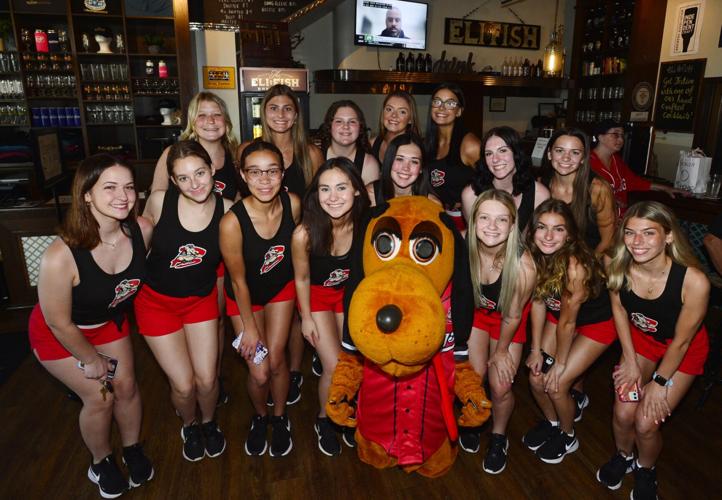 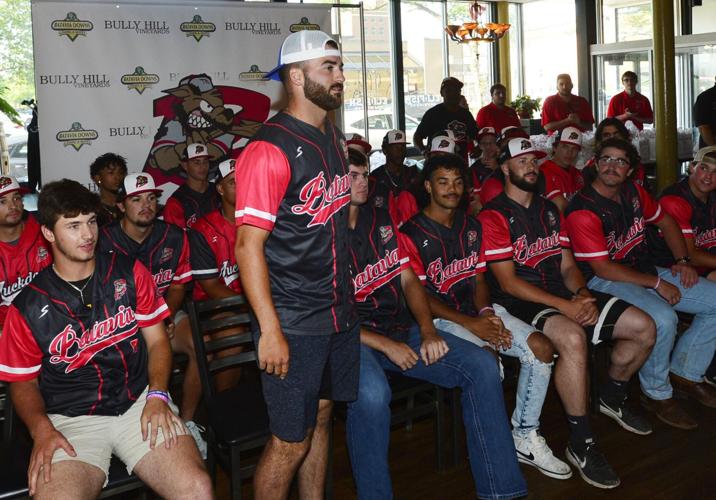 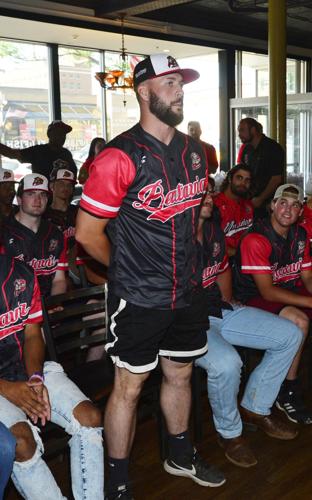 BATAVIA — Kartier Hanson, 5, of Batavia was running around Eli Fish Brewing Company while the restaurant hosted a meet-and-greet with season ticket holders and the community.

He was also hanging out with his great-grandfather, Ross Fanara, and Muckdogs infielder Jerry Reinhart Tuesday as people got the chance to chat with the players and coaches before the team’s home opener at 7:05 p.m. Saturday at Dwyer Stadium.

Kartier, who has just started playing T-ball, is a fan of Reinhart, who wears No. 9 for the Muckdogs.

“No. 9’s team wins all the time,” Kartier said cheerfully. He nodded excitedly when Reinhart asked him, “Do you want to be like me?” The 5-year-old is also looking forward to going to Saturday’s game with his great-grandfather.

Fanara said Kartier has picked up a few baseballs at games.

“He’s got the autographed ones. Jerry gave him a bat, so he does all right. He runs the bases. A helicopter drops the candy. He grabs the candy,” Fanara said, describing some of the activities his great-grandson has participated in at Dwyer Stadium. “He’s quite a little guy.”

Joe “Coach Joe” Martinez, the Muckdogs’ second-year head coach, said the people he talked to Tuesday were mostly season ticket holders, but there were also some who came in to buy tickets.

“These are all die-hard ‘Muckdogs Mafia,’ as we call them. We can’t do what we do without those guys. We love every minute of this. We love them to come out every day,” Martinez said.

Last year, the Muckdogs and the Challenger Division Baseball League joined to host the first-ever Challenger game at Dwyer. Challenger Baseball is for people ages 5 to 21 with disabilities and has been part of the GLOW region for 16 years.

The players and the organization, from top to bottom, love to be part of the community, Martinez said. The Muckdogs are owned by Robbie and Nellie Nichols.

“We’re excited to be back in this community and to help this community as much as possible,” he said. “They’re the ones that support us, so we have to support them as well. They (fans) know baseball season’s right around the corner. You can imagine the excitement of these people. The fact that the Nichols family and our organization brought it (baseball) back to Batavia, it makes it a lot more exciting because they missed baseball for that one year (2020). We had a successful, magical season last year,” he said.

In 2021, the Muckdogs missed the playoffs by just one game, the team says. Reinhart, 22, of Batavia, was on that team. He said he’s played for Martinez for about four years.

“He was my coach after my freshman year in Utica. I’ll play pretty much anywhere, but mainly third base,” Reinhart said.

Of the community members he met Tuesday, Reinhart said, it’s been a mix of younger and older fans. Most of the people I know from growing up here. Some of the people I know just from meeting them last year, because they’re fans of the Muckdogs. A lot of them are younger kids.”

The player says he mainly wants to be a good role model for the younger people around town.

“We usually have a lot of events on the field where the kids are coming around and doing things. I just want to do the best I can out on the field and show the kids that you just have to hustle hard and work hard, and your dreams will come true,” Reinhart said.

Reinhart said he walked around at Eli Fish and said hello to people.

“It’s good being back here and seeing everybody,” he said.

At Batavia High School, Reinhart, who graduated in 2017, played football and baseball, and competed in indoor track.

When they take the field at Dwyer Saturday night, Reinhart and the Muckdogs will face Elmira.

“Saturday night’s going to be a show. I think there’s going to be a lot of people there. I’m just hoping that we can play our best and put on a good show for everybody,” he said.

Missy Smith of Batavia and her daughter, Annabelle Smith, age 12, were there with Claire Bohn, 15, of Batavia.

“We wanted to see Skip (Martinez) and the returning players, and then meet the new players,” Missy Smith said. “We met a lot. They were all very welcoming and took pictures with us. I saw some of them signing autographs. We didn’t go that far, but we felt like we really made a connection with them.”

Bohn said this is the first year they’ve had Muckdogs season tickets. Missy Smith said, “Last year, we went to a ton of games and it just made more sense to get the season tickets.”

“The girls fell in love with the players and the team, and, really, the sport of baseball, so they got gloves and bats and season tickets for Christmas. The Muckdogs really kicked off something special.”

Bohn said they will go to this Saturday’s home opener. She said there isn’t really one thing she likes most about the team.

“I just enjoy the game of baseball,” she said. “Last year was my first-ever time going to a Muckdogs game.”

Annabelle Smith said she’s been to a Muckdogs game before last year.

“We’re glad to have them back. Normally, we only go to a few games a year,” Missy Smith said. “This time, now, we’re really committed to going and supporting the team ...”

“This year, we’re really hoping to get to all of them,” Missy Smith said.

In 2021, the girls brought the players some gifts, she said.

“Signatures — I have one on my foot right now — on one of my shoes,” Annabelle Smith said.

Missy Smith said Annabelle and Claire got to play catch with the players on the field after some of the games.

“They acknowledge their fans a lot,” Bohn said.

“I just feel an excitement vibe between the fans, the coaching staff, the players,” he said. “We had most of the team, probably about 30 of them are here tonight.”

Robbie Nichols said teams are allowed to have 40 players and the Muckdogs will be pretty close to that number.

Regarding events the Muckdogs do for the community, Robbie Nichols said, “They (the Muckdogs) have a few more days off this year, so we will be attending some different promotions, like this, with the fans. We’ve got some surprises for opening night, so we have to make sure people don’t miss opening night. It will be very special.”