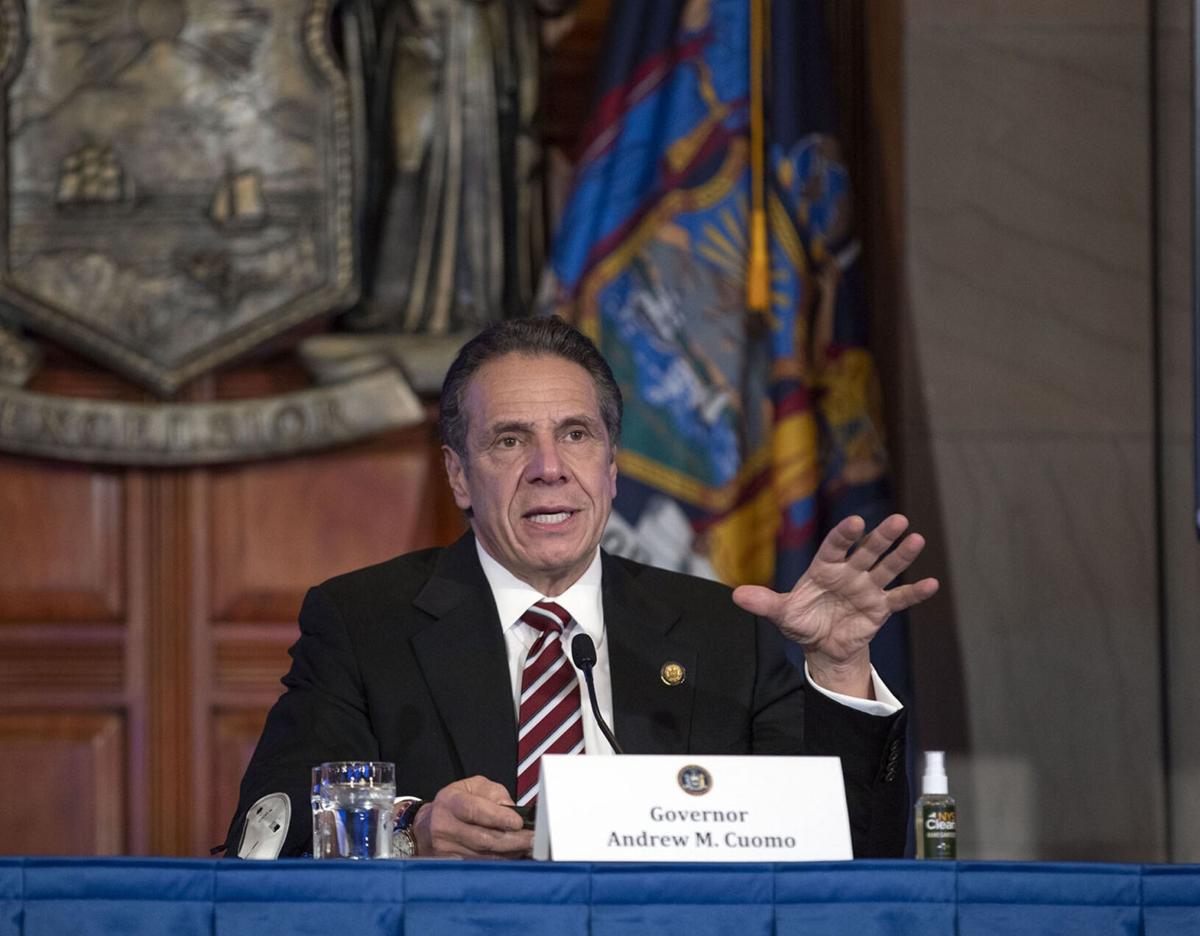 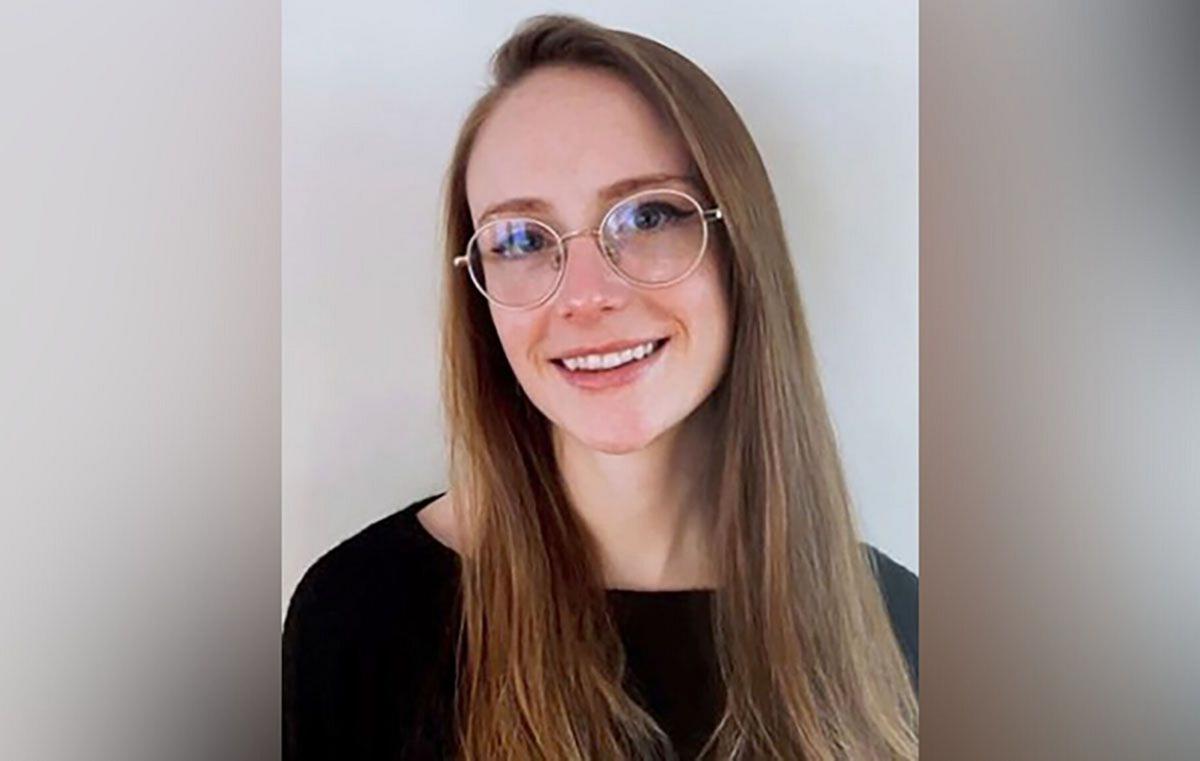 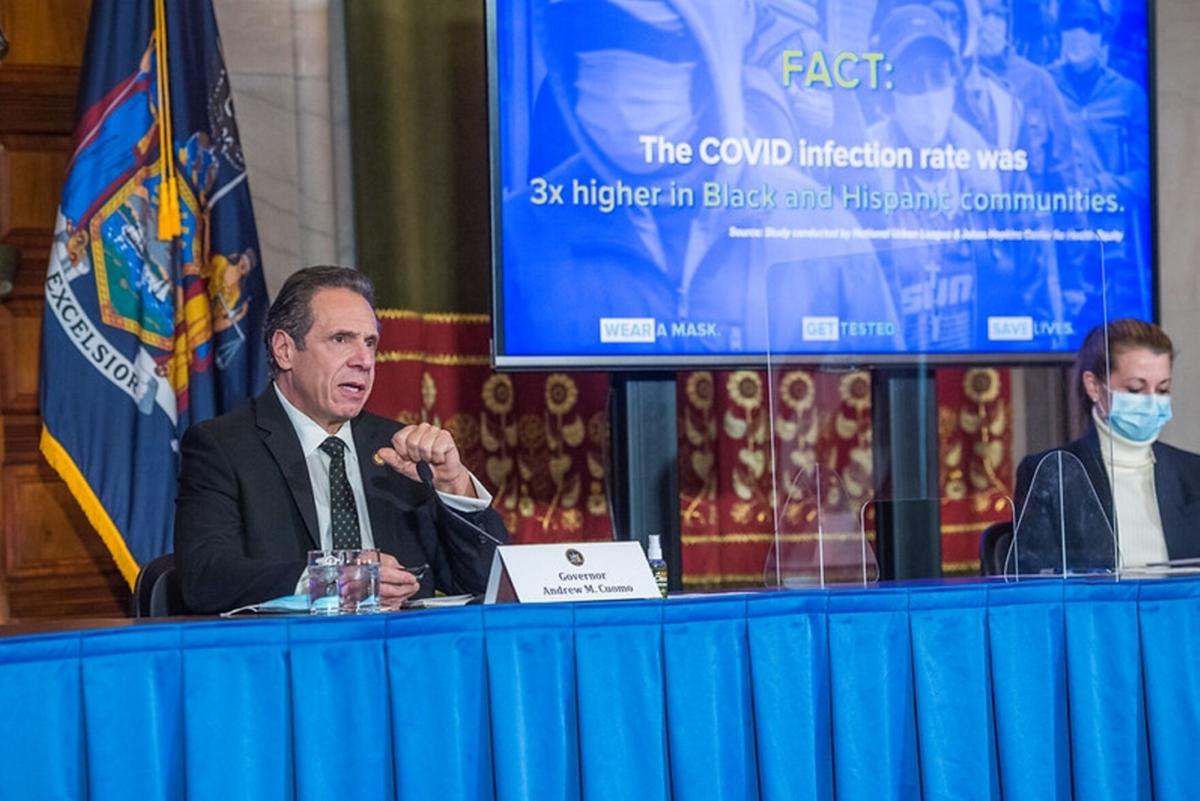 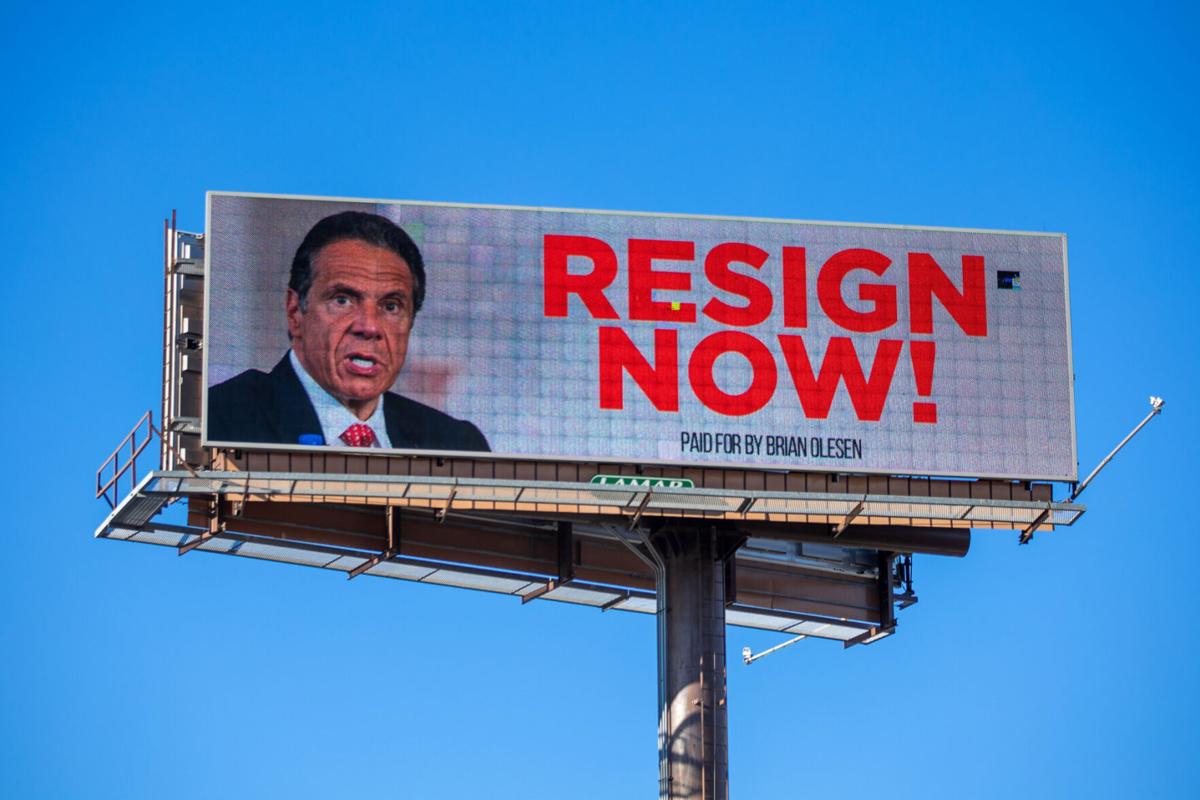 ALBANY — Increasing numbers of state lawmakers and political leaders took sides Tuesday as officials debate Gov. Andrew Cuomo’s resignation and the need for due process in the state attorney general’s investigation after a third woman accused the governor of

On Monday night, The New York Times reported 33-year-old Anna Ruch’s recount of an incident after meeting the governor at a Manhattan wedding in 2019. She alleges the governor held her face after they were introduced and asked if he could kiss her. Ruch said Cuomo had made her feel uncomfortable when he put his hand on her bare lower back.

Ruch is the third woman to publicly accuse the governor of sexual harassment or share an account of intrusive sexual advancements.

Six Democratic lawmakers, including Sens. Julia Salazar and Jabari Brisport and Assemblymembers Emily Gallagher, Phara Souffrant Forrest, Zohran Mamdani, and Marcela Mitaynes called on the governor to resign Tuesday and for the Legislature to begin impeachment proceedings in light of the accusations.

“The accounts of sexual harassment from the women who have courageously come forward confirm what many in Albany have known for years: that Gov. Cuomo uses his power to belittle, bully and harass his employees and colleagues,” the lawmakers said in a joint statement. “The accounts add to recent revelations of gross misconduct. It is time for the Legislature to demand accountability.

“Impeachment proceedings are the appropriate avenue for us to pursue as legislators to hold the Governor accountable for his many abuses of power and remove him from office.”

The state Working Families Party released a statement Tuesday pushing the governor to resign immediately. Cuomo ran on the party line, which typically endorses progressive candidates, in 2010, 2014 and 2018.

The state young Democrats released a statement citing a statistic that 75% of workplace harassment incidents go unreported, according to the U.S. Equal Employment Opportunity Commission.

“We believe the survivors and trust that the AG’s investigation will substantiate the claims that have been made,” according to the Young Democrats. “Because of this, and in light of this demonstrated pattern of behavior, we call on the governor to resign immediately. These particular incidents reiterate the need to reform the structures and systems through which the Legislature and executive address issues of sexual harassment and assault.

“...To all survivors of sexual harassment or assault in any instance: We hear you and support you wherever you are, as this is not limited to the workplace or legislative halls.”

Representatives from Cuomo’s office did not return requests for comment Tuesday.

The governor has not made a public appearance or taken questions from the press since Feb. 22, and skipped a week of regularly scheduled COVID-19 briefings.

U.S. Rep. Kathleen Rice, D-4, was the first member of the state’s congressional delegation to call for the governor to step down. Rice wrote “The time has come. The governor must resign,” on Twitter at 8:18 p.m. Monday, while sharing a link to the New York Times article of Ruch’s account.

Some Democrats, including Assemblywomen Yuh-Line Niou, D-Manhattan; and Nathalia Fernández, D-Bronx; and Sens. Alessandra Biaggi, D-Bronx/Westchester, who chairs the Ethics and Internal Governance Committee; and Gustavo Rivera, D-Bronx; were among some of the first members of the governors party to call for Cuomo to step down as two additional women have come forward since Saturday.

Ruch’s account follows a Saturday report in The New York Times Bennett, said while she worked as Cuomo’s former executive assistant and health policy adviser at the height of the COVID-19 pandemic’s initial outbreak late last spring, the governor repeatedly asked her about her sex life, if she had ever had sex with older men and if she was monogamous in her relationships.

Boylan, who is running for Manhattan borough president, alleged “degrading,” “uncomfortable” and “insidious” harassment while working for Cuomo, and accused him of a nonconsensual kiss in his Manhattan office, comments comparing her looks to those of another woman he was rumored to have dated and unwanted touching of her lower back, arms and legs.

Other legislators of both parties are urging patience and to allow for due process as state Attorney General Letitia James begins the search to appoint an independent law firm to conduct a review into both women’s allegations. Representatives from James’s office declined to provide further details about the investigation, or say if the probe will include reviews of additional employees of the executive chamber.

New York State Democratic Party Chairman Jay S. Jacobs, a friend of the governor’s, said Tuesday the calls were premature and unfair until the investigation is completed and conclusions are made public.

“As my statement on Sunday noted, the allegations against Gov. Cuomo are serious, disturbing and require a full, independent investigation,” Jacobs said.

“Now that independent investigation, called for almost unanimously by Democratic leaders across the state, has been referred to the Attorney General and is being commenced, it is both premature and unfair for anyone to opine on the outcome until that investigation is completed and the results reported.”

“While they may have just now discovered their moral compass, Republican leaders have absolutely no standing whatsoever to share their opinion on the current matter,” Jacobs said. “I urge all Democrats to unite in our determination to allow the attorney general’s investigation to do the work we have called for, and then to do what is right, whatever the outcome. In the meantime, our state has a budget to complete, a pandemic to fight and the people’s work must continue.”

Michael Whyland, communications director to Assembly Speaker Carl Heastie, D-Bronx, blasted Republicans in the Assembly minority in a statement Tuesday afternoon, saying they hindered lawmakers and are hypocritical in their calls for Cuomo’s, but not former President Donald Trump’s, resignation.

“Instead of helping to move our state forward, Assembly Republicans are working overtime to stall efforts to help our communities by playing politics during a time when New Yorkers can least afford it,” Whyland said. “Let’s remember, these are the same do-nothing politicians who just a few weeks ago sat idly by while Donald Trump worked to undermine our democracy and destroy our institutions. They said nothing after the president incited an insurrection at the U.S. Capitol that resulted in multiple deaths. They said nothing when the confederate flag was brought into our nation’s Capitol. Indeed, at least one of their members encouraged the protesters prior to the attack on our nation’s Capitol. Their political posturing now is pure hypocrisy.”

Assembly Democrats must focus on the ongoing COVID-19 pandemic and the state’s hurting economy, Whyland said.

“New Yorkers want us to get to work to develop solutions that help them. That is what Assembly Democrats will always focus on,” he added. “Our Majority members understand the seriousness of the issues that have arisen and will address them responsibly. But Republicans who play these games will have to go back to their districts and explain to their constituents why they are more interested in trying to score meaningless political points than helping New Yorkers recover. In the meantime, our members are committed to getting the real work done.”

“Even a year’s worth of Gov. Cuomo’s unilateral authority apparently isn’t quite enough for Assembly Democrats,” Fraser said. “Despite mounting cover-ups and controversies, Democrats yet again voted against removing Gov. Cuomo’s powers. They continue to yield authority to an executive facing multiple criminal investigations and sexual harassment allegations. At all times, Assembly Republicans stand ready to work on the people’s business and moving New York forward. In contrast, Assembly Democrats have chosen to sit on their hands.”

Fraser pushed back at the Majority conference for canceling Monday’s session and spending fewer than three hours in session last week, criticizing his colleagues for accomplishing little over the past several days.

“They can talk about a sense of urgency, but they’ve failed to demonstrate it,” he continued. “This is a moment when the Legislature should be stepping up, but Assembly Democrats have stepped aside. For months, Republicans have made repeated efforts to restore New York state government to the representative system it was always intended to be, and doing so in the best interest of democracy and bipartisanship. Assembly Democrats blaming that effort as ‘scoring political points’ sounds like the same talking point used by a governor who also struggled to accept accountability.”

Lawmakers continue to be split on the call for the governor’s resignation.

“It is highly disturbing that we continue to see examples of Gov. Cuomo’s disrespectful and troubling behavior towards women,” said Assemblymember Didi Barrett, D-106. “So let me reaffirm my strong belief that there is no place for sexual harassment or bullying in any social setting or any workplace — most particularly in government where we should be leading by example.”

Barrett called for the governor to refer the investigation to James with subpoena powers.

“I have full confidence that she will do so thoroughly and professionally,” Barrett said. “Everyone is entitled to the opportunity to tell their truths and that is what an investigation will do. Now, the legislature should refocus on the important work of the 2021 budget and allow Attorney General James to do her job.”

“We have an obligation to make sure that anyone who alleges mistreatment in the workplace is taken seriously and that proper inquiries be conducted,” Hinchey said. “Nothing less than an independent and immediate investigation is acceptable. I am glad that New York Attorney General Tish James now has the power to begin this investigation, and I know that her office will work expeditiously to get New Yorkers the answers we deserve.

“I am also confident that the Senate Majority will be introducing comprehensive legislation this week to address the governor’s executive powers and provide more legislative oversight on his executive actions going forward.”

Sen. Rachel May, D-Syracuse, responded to the accusations of abuse piling up around Gov. Cuomo on Tuesday by saying it seems unlikely legislators will be able to accomplish much, including passing a budget, while the governor remains in power.

She stopped short of calling on Cuomo to resign, as some of her fellow Democratic legislators have done.

May said she would prefer to wait for James’s investigation to resolve allegations of sexual harassment and employee abuse, as long as it moves quickly.

“My preference is to let the independent investigation proceed, and proceed quickly,’’ May said in a prepared statement. “But it is getting harder and harder to see a way forward to doing our jobs with this governor in place.’’

The governor plays a powerful role in negotiating the budget, which is due April 1. May said the allegations against Cuomo are “such a distraction’’ that it will be difficult to complete the process.