Sign Up
Log In
Purchase a Subscription
You have permission to edit this article.
Edit
Home
News
Sports
Obituaries
Opinion
Arts & Life
Calendar
Photo and Video
Ads
eEdition
More
Share This
1 of 7 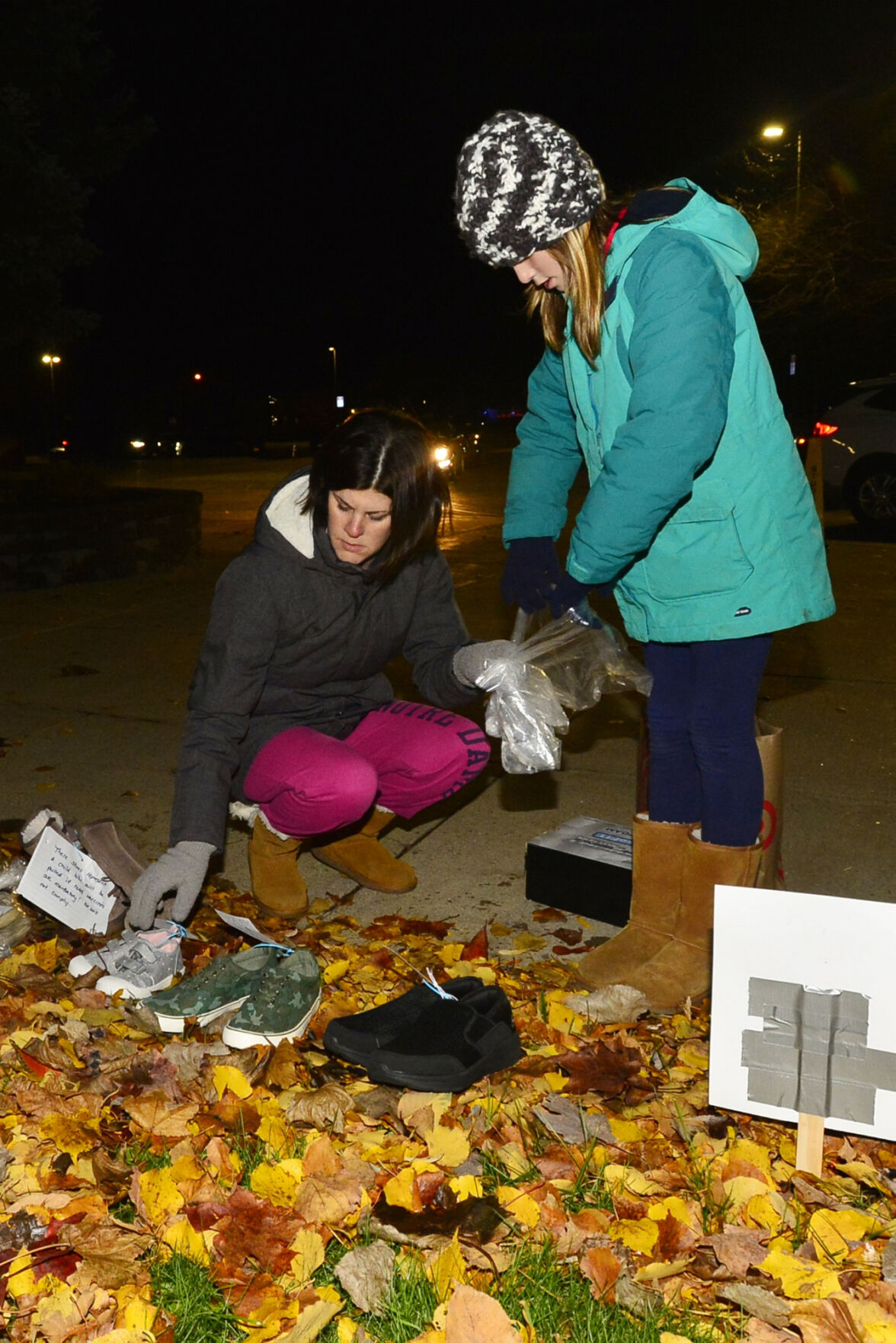 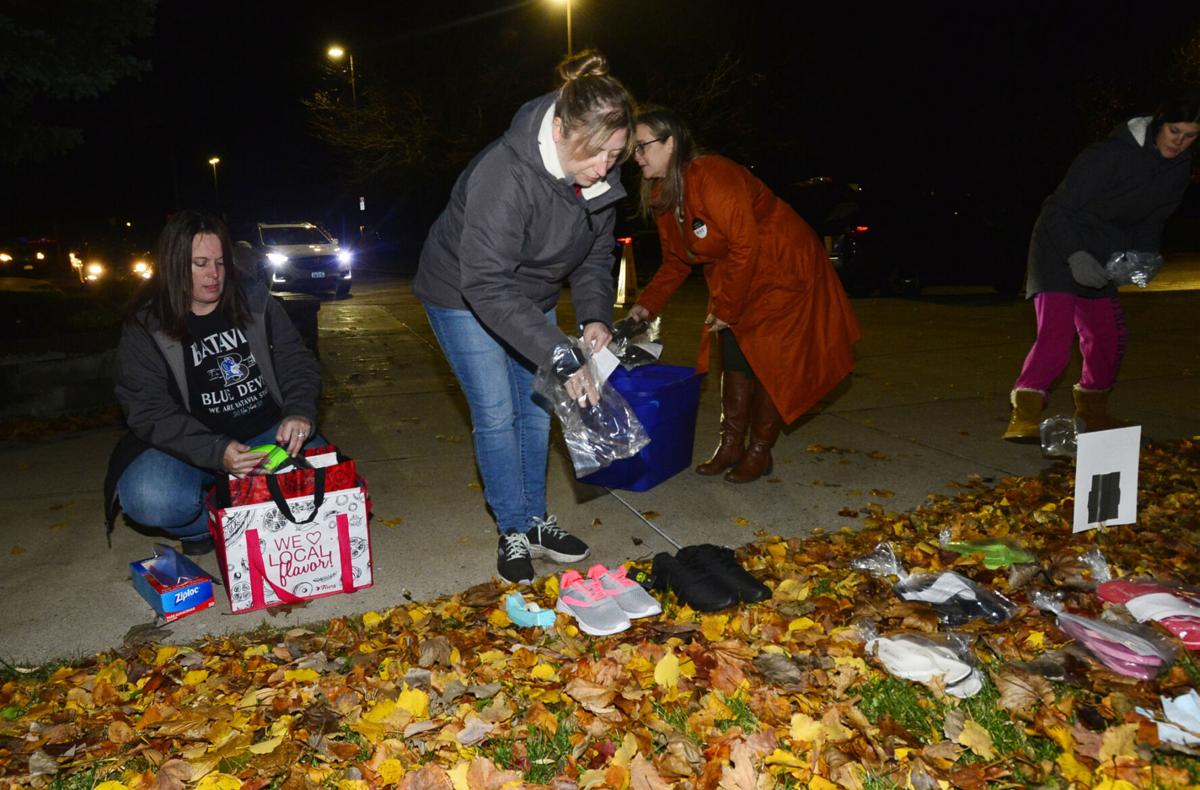 Mark Gutman/Daily NewsCarissa Helsdon, center, a mother of two Batavia students, places a few pairs of shoes on the lawn. At far left is Michelle Gillard. 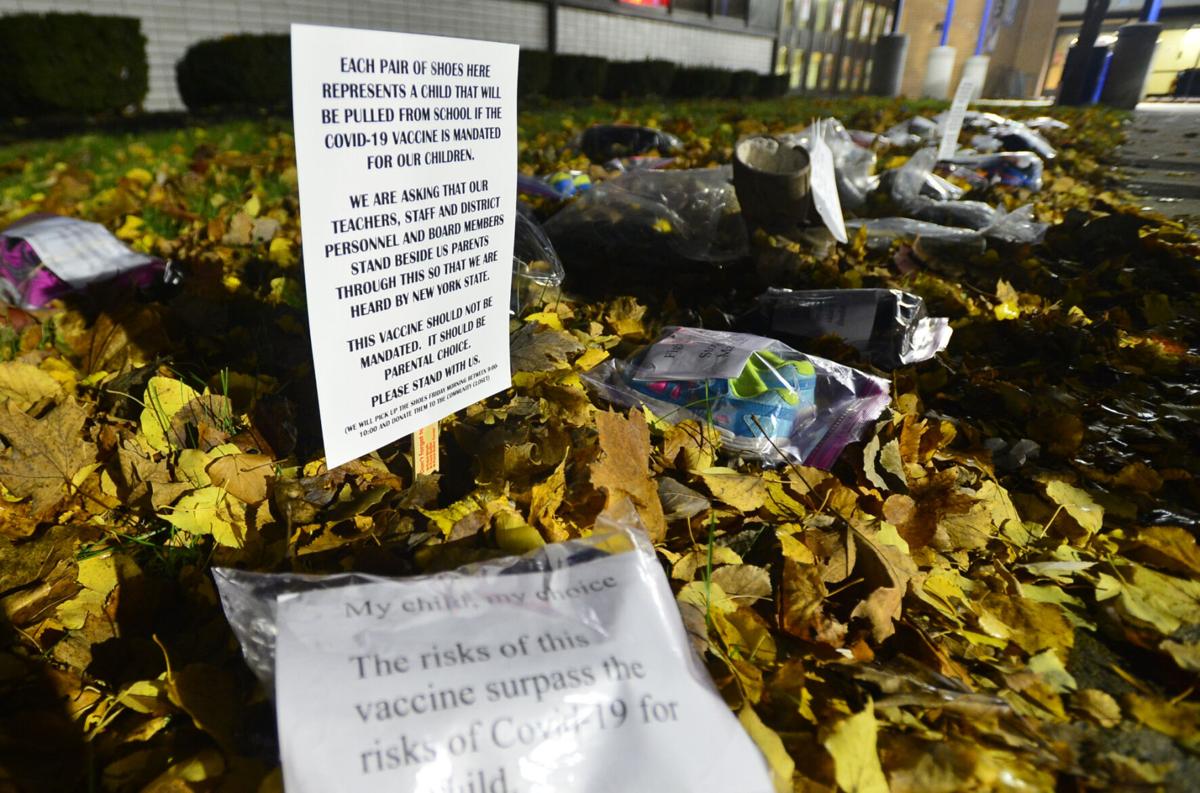 Mark Gutman/Daily NewsSigns were put up around the shoes during the protest. 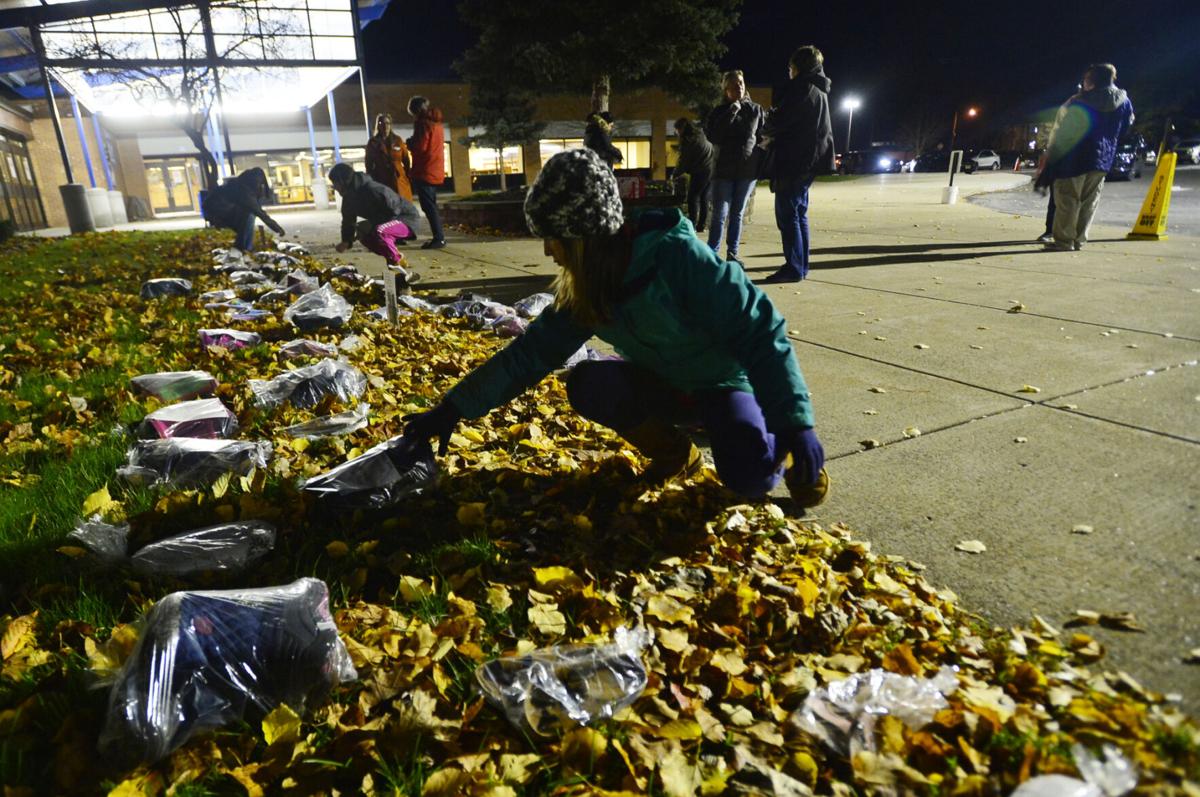 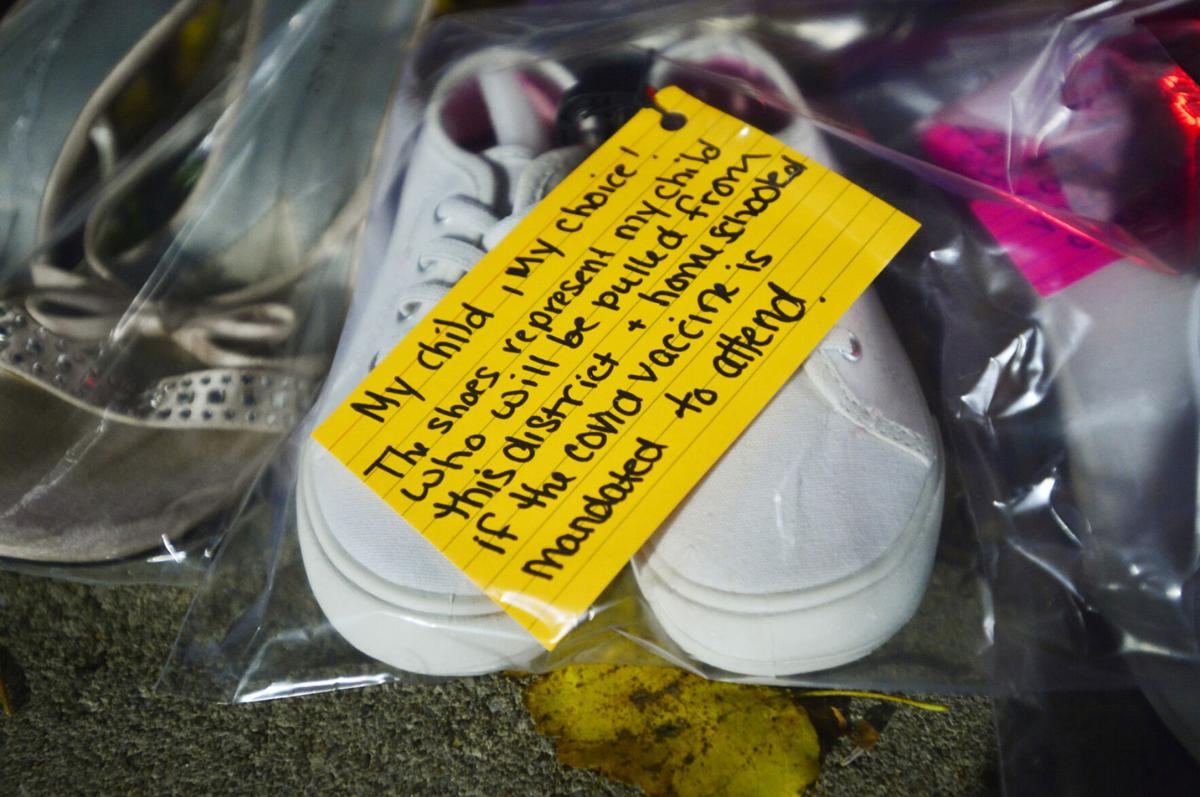 Mark Gutman/Daily NewsA pair of shoes with a note attached. 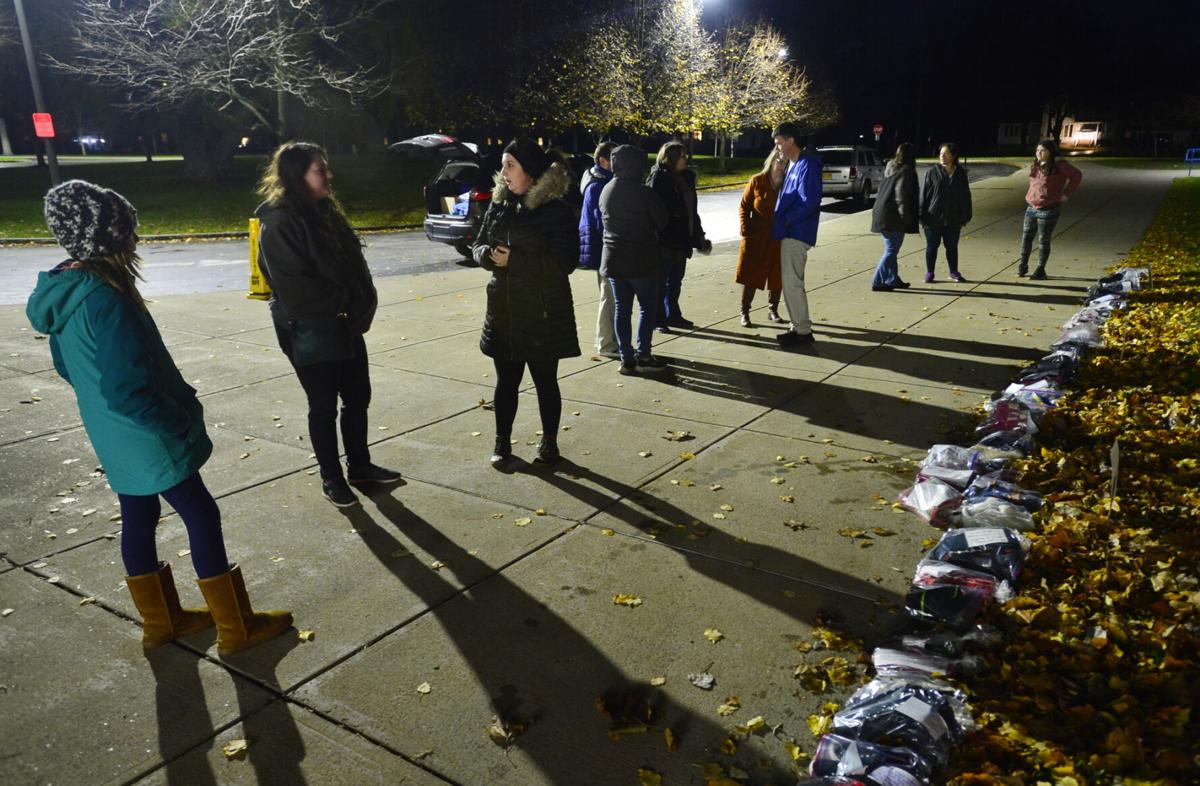 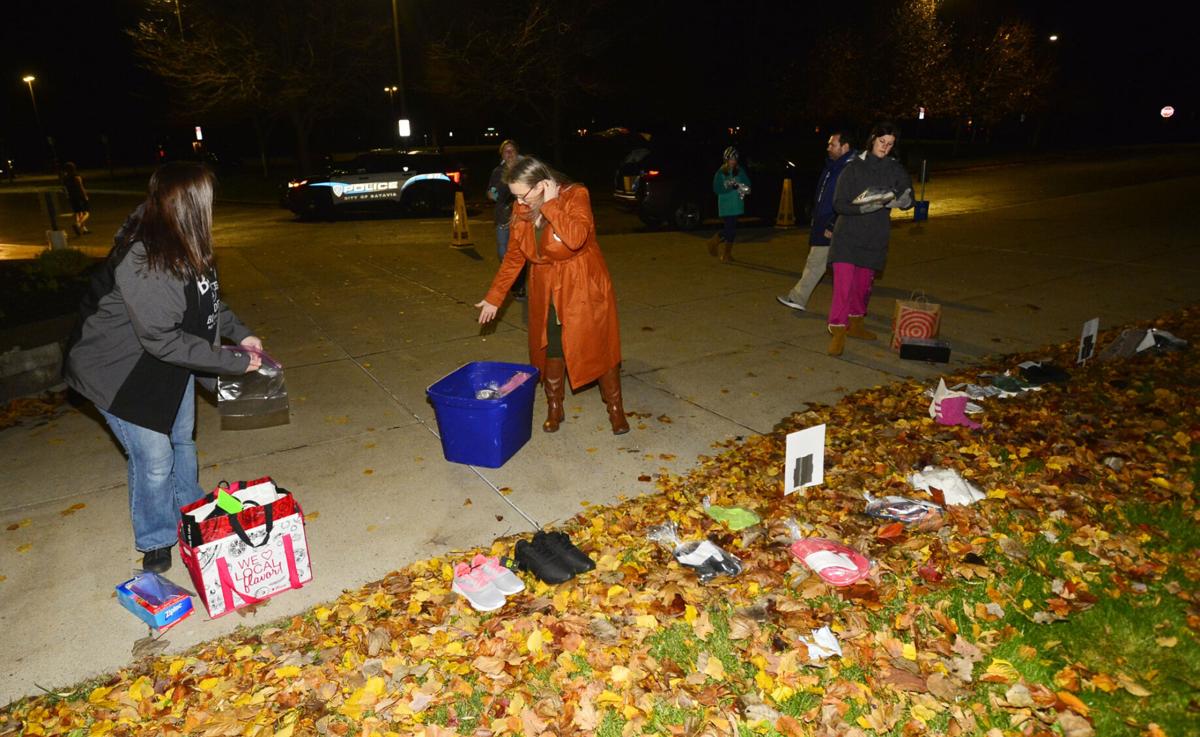 Mark Gutman/Daily NewsCarissa Helsdon, center, a mother of two Batavia students, places a few pairs of shoes on the lawn. At far left is Michelle Gillard.

Mark Gutman/Daily NewsSigns were put up around the shoes during the protest.

Mark Gutman/Daily NewsA pair of shoes with a note attached.

BATAVIA — Operation Shoe Drop led to over 100 pairs of shoes being dropped off on the lawn in front of Batavia High School as part of a statewide protest, but did not completely go the way it was supposed to, a participant said Friday.

Things had gone well, but the district picked up the shoes before they were meant to be picked up, resident Jo Coburn said Friday. Coburn said her understanding was that there were only two schools, at least in Genesee County, which allowed shoes to be left out until the morning.

“By 11:15 (p.m. Thursday), there were no shoes left outside of the school,” Coburn said, adding that Batavia district janitors came out after 11 and took them inside. She said it was disappointing that the shoes and signs left outside were not there in the morning for students, teachers and anyone else entering the building to see.

Operation Shoe Drop took place Thursday to protest the proposed law, New York State Assembly Bill A08378, which authorizes the commissioner of health to develop and supervise a program of immunization against COVID-19 for purposes of state aid to schools and requires immunization against COVID-19 for students to attend school. The bill is currently in the Assembly Health Committee.

“As far as turnout across the state, there was one district that had 4,000 shoes show up. I think there was a Buffalo school that when they counted it was over 800 and another had over 1,000,” Coburn said.

Coburn Friday reiterated that there should be a choice when it comes to students getting the COVID vaccine.

“This wasn’t an anti-anything movement. This was a ‘We live in a free country. There should be freedom of choice, especially for the kids, (movement),’” she said.

In total, Coburn said, the shoes at the Batavia protest were donated to Community Closet at Robert Morris.

Batavia City School District Interim Superintendent Scott Bischoping said the district didn’t have any formal notice about Thursday’s protest, but that the district was only told about a Facebook post.

“Nobody from whomever was arranging that contacted us to tell us that this was going to happen,” he said. “Our information came though indirectly. We just saw a Facebook post,” he said Friday.

“Our folks had picked the shoes up. We stored them and somebody came to pick those up today for what we understand is community use, for donating to our Community Schools operations,” Bischoping said. “The district is always thankful for those donations to students and families in need. It’s my understanding that all those shoes being dropped were for donations.”

The interim superintendent said the district hasn’t received any update on the status of the bill.

“Nothing’s been shared with us about that,” he said.

If the legislation passes and the vaccine is mandated, how concerned is the district that parents will pull their children out over this issue?

“Since this is pretty new to us, we haven’t had that conversation. There’s been no conversations or discussion about that at this point in time,” Bischoping said.

The interim superintendent said it’s tough to comment on this particular bill without knowing what’s in it.

“We don’t have enough information ... to be able to comment on that,” he said.

In general, if a law is in place, the Batavia City School District has to follow it.

“We would follow whatever’s in place at time. We don’t have any option not to,” Bischoping said.

At the High School Thursday night, parent Jen Guarino said, “Each pair of shoes represents each child that will be pulled from the school districts across the state if this (vaccine) is mandated. “There’s social media groups for this. There’s been hundreds of parents in Genesee County that I’m aware of, in the districts, that are participating in this, and thousands statewide.”

Asked what she hopes the Batavia City School District, or schools in general get from this protest, Guarino said, “I hope they realize they’re going to lose a lot of students. Parents have had enough and this is crossing the line. Mandating the vaccine? I don’t think parents are going to stand for that. This is our way of telling them. Hopefully they’ll back us for once, because they’ve been very disappointing.”

At the Pembroke Central School District, Superintendent Matthew Calderon said Friday that at around 4:30 p.m. Thursday, he was made aware of a Facebook posting promoting the protest and he informed the Board of Education.

“I was not overly concerned because it was a clever peaceful protest that could result in more shoes at Goodwill. We were prepared to get some boxes ready, but the messages on Facebook indicated that the parents were planning to retrieve the shoes the next day to donate,” Calderon said. “There were 41 pairs of shoes in plastic bags placed in the front courtyard at the Intermediate School, along with some signs. Shortly after 9 a.m. this morning, a group of parents picked up everything.”

Calderon said the district is aware of proposed legislative bills that are both for and against mandating the COVID-19 vaccinations for students.

“I shared that information months ago with all Pembroke families so they could communicate their perspectives with our local legislators one way or another,” he said. “We have not heard any updates as to whether or not any of those bills are getting traction in their respective committees.”

Calderon said he recently conducted a survey to all Pembroke parents to gauge interest in hosting a COVID-19 vaccination clinic in Pembroke. There were 410 parents who responded, representing 718 students out of 892).

“The primary purpose of the most recent survey was to gauge interest about the district hosting a vaccination clinic after school hours in anticipation that the Pfizer COVID-19 vaccine would receive Emergency Use Authorization (EUA). Based on the survey results, there were approximately 100-200 children who were interested in getting the vaccine here at school if such a clinic was offered after school hours,” he said. “However, the local Department of Health and the district agreed that the best option for children to get the vaccine is with their pediatricians. Nonetheless, the local DOH began facilitating community clinics for ages 5-11 and we shared that information with parents.”

Based on survey comments, a number of parents responded “no” regarding participation in a clinic for one or more of the following reasons:

n Their children are already vaccinated for COVID.

n They plan to get more information from their family physician.

n They want to wait until the vaccine is officially approved beyond the Emergency Use Authorization.

n They are concerned about the side-effects of the vaccine.

n They want to wait until the vaccine has been out longer because the long-term side effects are unknown.

n They do not believe the vaccine is necessary for children based on the data that suggests COVID poses minimal risks to children.