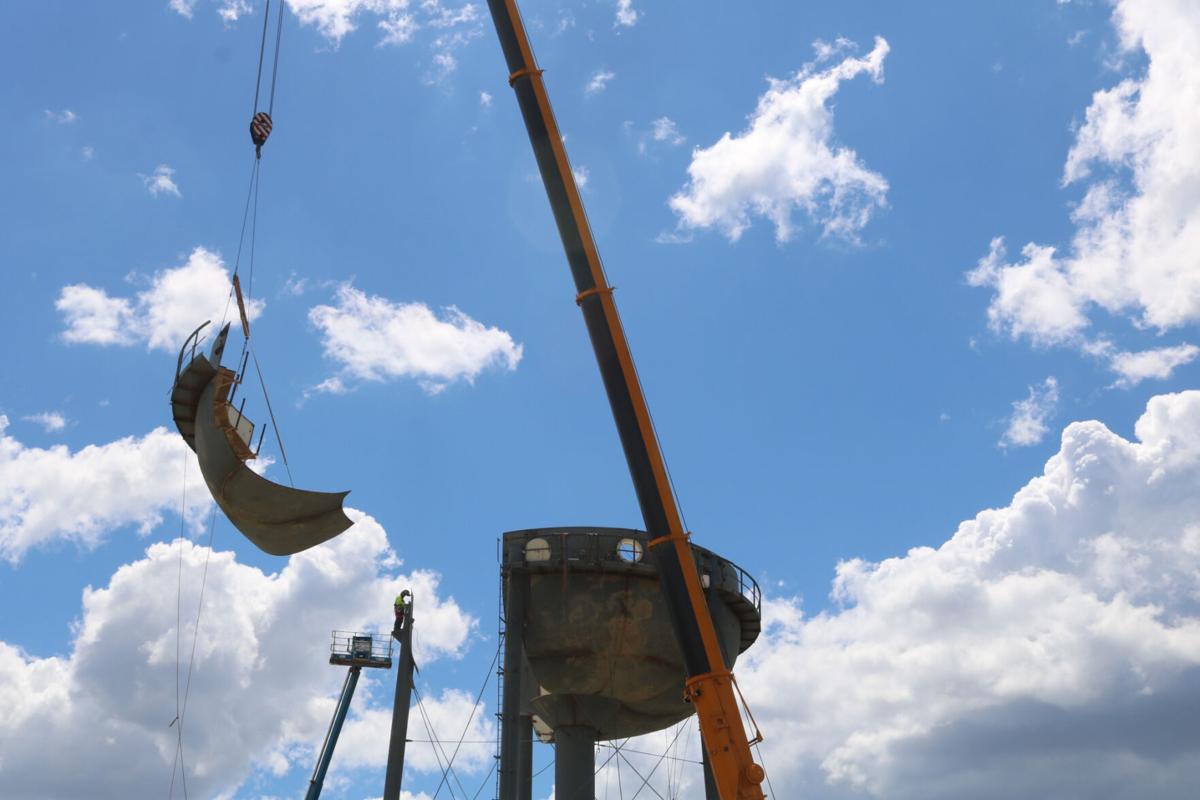 BRIAN QUINN/DAILY NEWS A portion of the new water tank is hoisted into place Thursday afternoon in Pavilion. 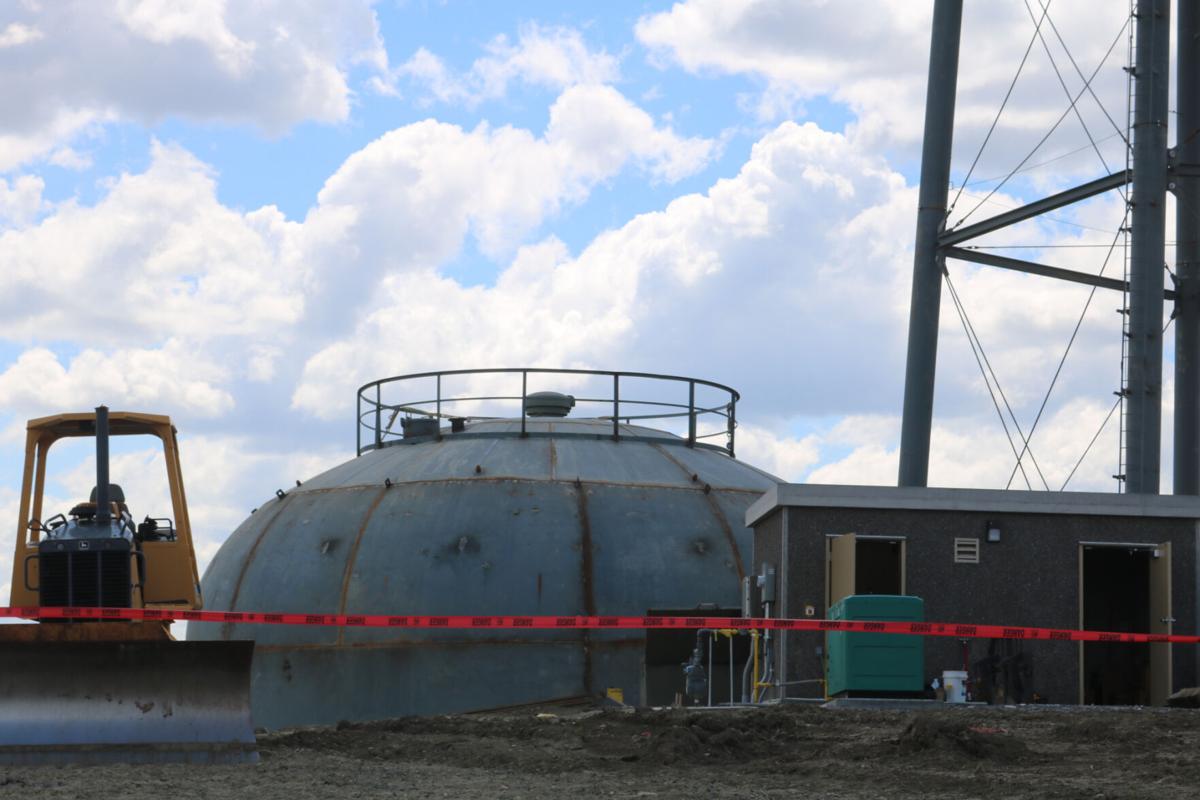 BRIAN QUINN/DAILY NEWS The top of the 300,000 gallon tank waits to eventually be set in place. 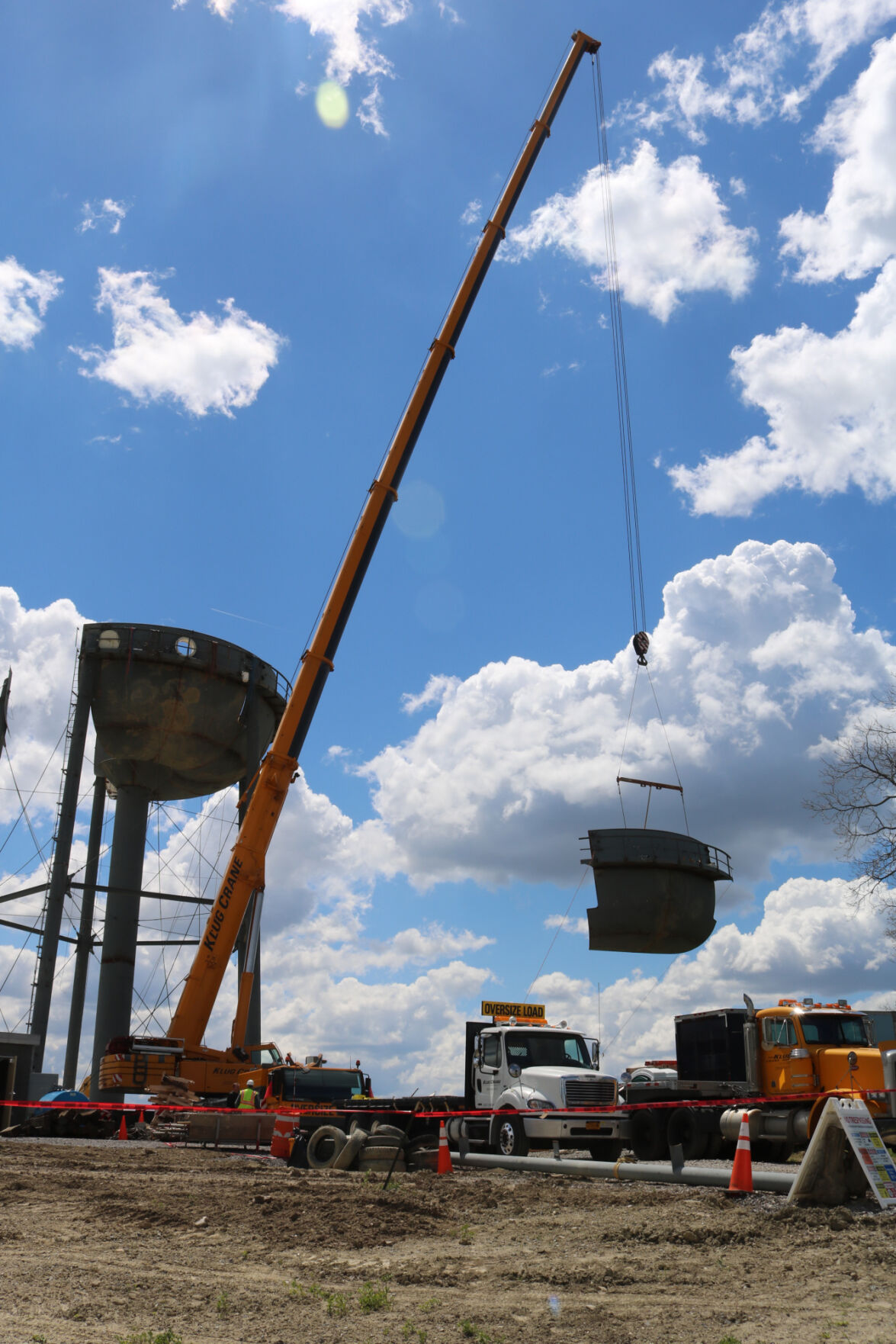 BRIAN QUINN/DAILY NEWS A portion of the new water tank is hoisted into place Thursday afternoon in Pavilion.

BRIAN QUINN/DAILY NEWS The top of the 300,000 gallon tank waits to eventually be set in place.

PAVILION — Crews are working to put a 300,000 gallon water tank in place off of York Road that will take over for an aging tank that has reached the end of the road.

The tank in need of replacement is by Pavilion High School, said Town Supervisor Robert LaPoint. This project will help correct a problem of roughly 20 years, the town supervisor estimated.

“The original water system was designed to pump water up from wells in the valley to the existing water tank at the High School and then allow that pressure to flow back down into the valley,” he said Thursday. “Twenty-plus years ago, those wells became contaminated and this happened a couple of years before the county switched over to Monroe County Water.”

At that point, LaPoint said, the town had no water source.

“We combined with Le Roy and then, ultimately, moved to the countywide Monroe County Water System,” he said. “Since that time, our water system in Pavilion has been functioning in reverse from the way it was originally designed, Now, our water source comes in from the north part of town. Until point in time that this tower is online, we’ve been relying on pump pressure to pressurize the lines to get it over the elevation coming from the north to our holding tank, which is a lower elevation.”

The water tank should be the highest elevation, LaPoint said.

“Then they can pump all the water in and then you have all that gravity providing the flow and the volume for your water system. This tank will actually allow our water system to function the way that it should have functioned for the first time in 20 years,” he said. “We’ll have adequate volume and pressure to fight fires, which we haven’t had before. Water quality, which is managed by Monroe County, will be much more straightforward and easy for them, because it’s actually going to be working the way it’s supposed to work.

The total cost of the project is $2.74 million. The town has a $325,000 grant secured by former state Sen. Michael Ranzenhofer. The Monroe County Water Authority will contribute $1.1 million, LaPoint said.

Some of the delay was due to a struggle to figure out how to pay for the project, politically speaking, LaPoint said.

“We’ve had some turnover. I came on as supervisor two years ago,” he said. “It just is kind of a slow process.”

Talking about the current water flow system and its impact on firefighting, LaPoint said: “If you have a fire on South Street, they can’t just hook right into a fire hydrant and fight the fire.”

Instead, firefighters have to set up pools and truck water in and pump it in.

“When this tank is done, those fire hydrants are an 8-inch line going right to that water,” he said, pointing to the tank site. “A lot more water is going to come through in volume and pressure. A pump just can’t keep up with the amount of water you need to fight a fire.”

LaPoint said the fire department has managed, despite not be able to get water directly from hydrants.

“We have a rural fire department, so they are used to being able to fight fires in places where you don’t have municipal water and fire hydrants. They’re used to pumping out of creeks, ponds, whatever,” he said. “They did a phenomenal job when our general store burned down in 2014, but, again, they were pumping water from Oatka Creek when they had fire hydrants right there.

Construction on the new water tank should be done this fall.

“I think it’ll be September, but I don’t want to be overly optimistic and get people’s hopes up,” LaPoint said.