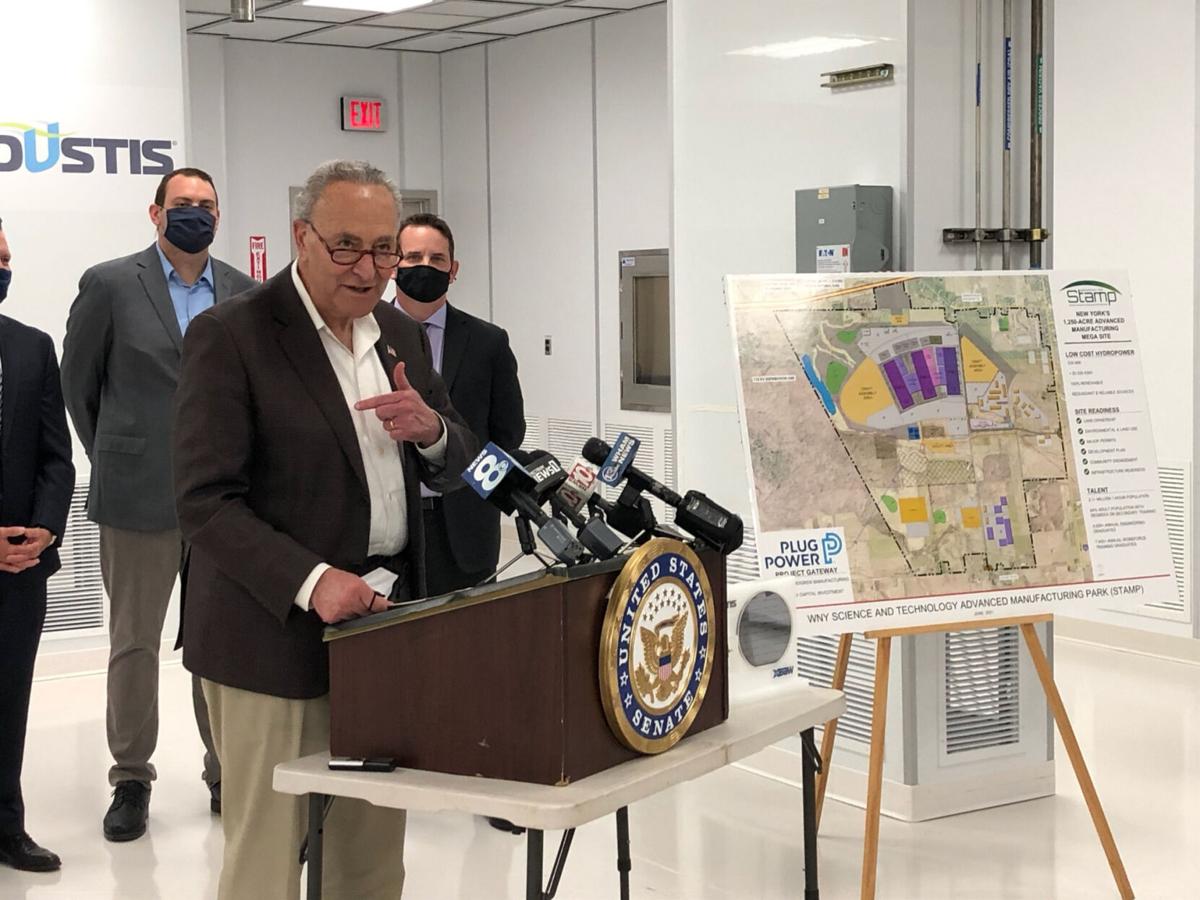 Sen. Charles Schumer, D-NY, outlines provisions of the United States Innovation and Competition Act (USICA) during a press conference at Akoustis Technologies in Canandaigua Wednesday. The act would provide billions of dollars to bolster investment in domestic technology research and manufacturing in an effort to ensure the U.S. maintains its position as a global leader in innovation. 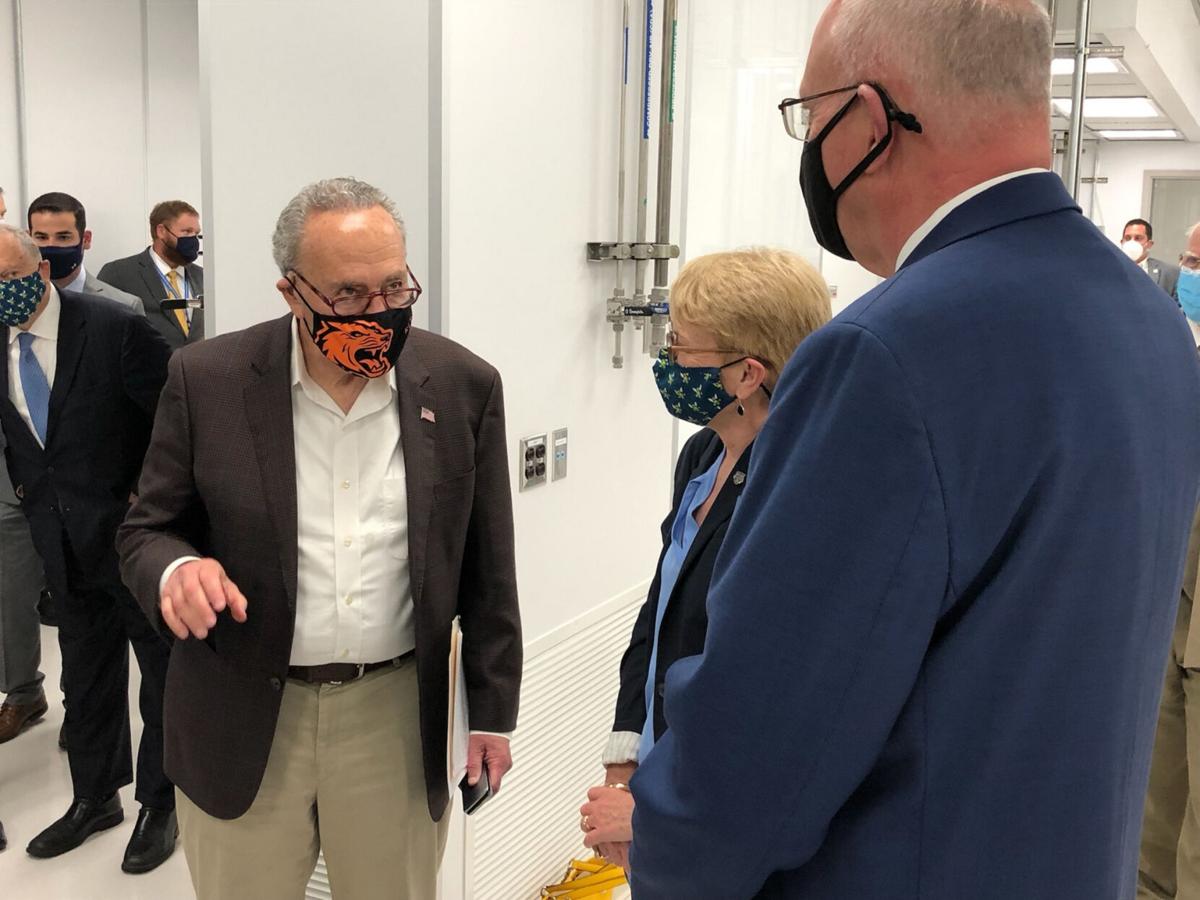 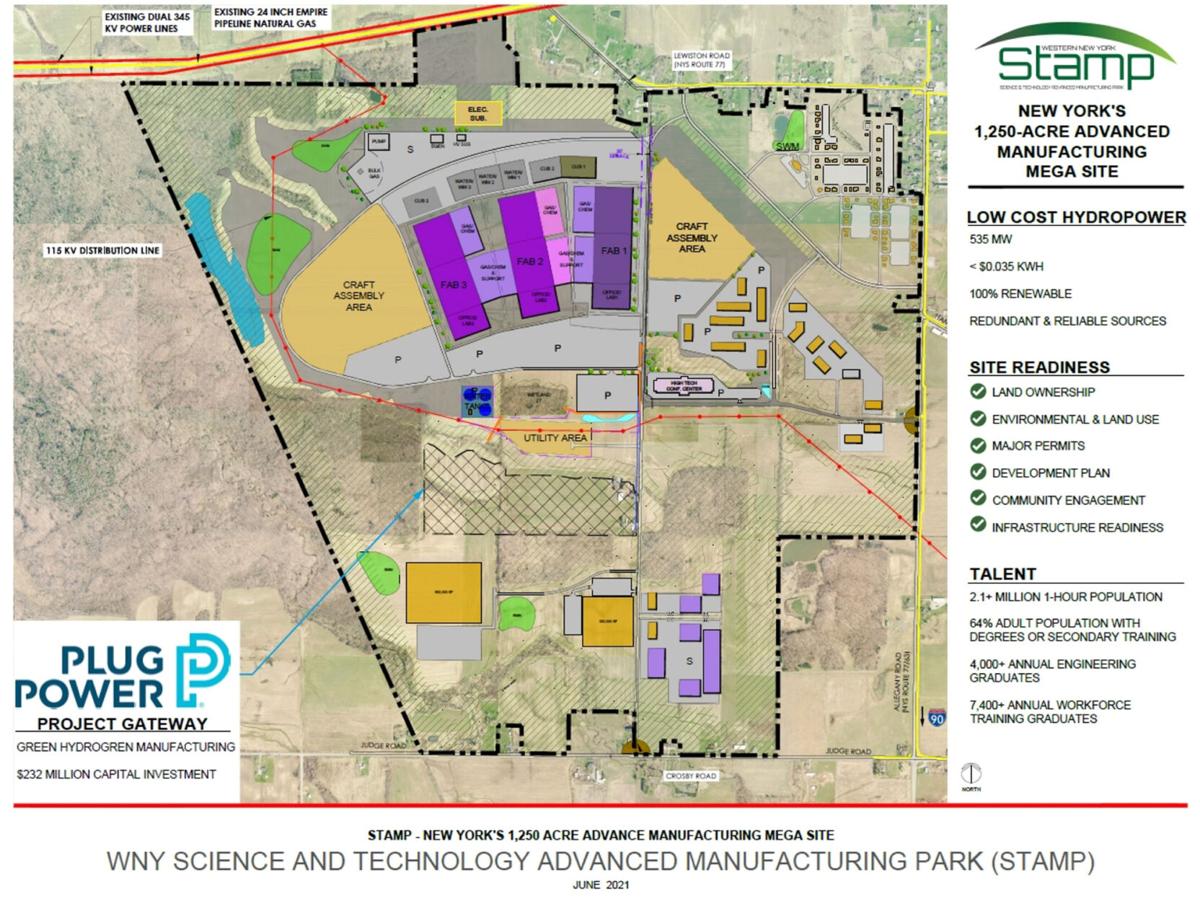 Sen. Charles Schumer, D-NY, outlines provisions of the United States Innovation and Competition Act (USICA) during a press conference at Akoustis Technologies in Canandaigua Wednesday. The act would provide billions of dollars to bolster investment in domestic technology research and manufacturing in an effort to ensure the U.S. maintains its position as a global leader in innovation.

Speaking Wednesday at Akoustis Technologies, a semiconductor manufacturer in Canandaigua, Schumer outlined the United States Innovation and Competition Act (USICA), which would provide billions of dollars to bolster investment in domestic technology research and manufacturing and ensure the U.S. maintains its position as a global leader in innovation.

“Unfortunately in recent years, countries like China have closed the gap in investment in technology and innovation and science with the U.S. — they’re investing more than we are in the key sciences,” said Schumer. “If we continue to decline and invest less than 1 percent of our GDP in research and science, China and maybe other countries … could overtake us and that would mean the loss of both economic and national security.”

With its ample selection of colleges and universities, Schumer said the Rochester area could see significant jobs gains if and when USICA becomes law.

“We have such a great bunch of universities and it’s not just U of R and RIT, great as they are, but it’s schools like Nazareth and St. John Fisher and SUNY Geneseo and SUNY Brockport — we have such a great constellation of higher education and much of it focused in science and tech,” he said. “That gives us a leg up, it gives us the potential to set up an ecosystem... to create these jobs, grow these jobs, train people for these jobs.”

In addition to providing billions of dollars in new funding for the National Science Foundation, the Department of Commerce, NASA and other federal agencies, USICA would seek to decentralize the country’s technology industries by creating what Schumer called “regional technology hubs.”

“The idea’s that all the tech jobs shouldn’t be in four or five major cities, but it should spread across the country,” said Schumer. “We are so well-suited to get that to happen here in the Rochester area. I will use my clout as the majority leader to get Rochester and Western New York chosen as a tech center.”

Schumer held up the bill’s bipartisan backing — it passed a preliminary vote in the Senate, 86-11, earlier this week and counts seven Republicans and six Democrats among its co-sponsors — as evidence of its broad base of support and expressed confidence it will pass a final vote in the Senate June 8.

Once the bill passes the Senate — “It will pass overwhelmingly with both a majority of Democrats and a majority of Republicans voting for it,” — Schumer said attention will turn to getting the measure through the House and on to the president’s desk for signature.

“President Biden has already taken … USICA and put it in his Build Back Better” plan, said Schumer, referencing the president’s sprawling pandemic recovery, infrastructure and jobs creation proposal. “He liked it, he saw it would create American jobs … and so we know we have his full support.”

The Science & Technology Advanced Manufacturing Park in the town of Alabama, Genesee County, appears poised to play a prominent role in the future of the region’s tech industries and its chances of being selected as one of the country’s 10 regional technology hubs.

The site, which comprises some 1,250 acres of build-ready parcels near the intersection of routes 77 and 63 in Alabama, was the subject of significant speculation earlier this year after the Wall Street Journal reported it was one of five sites in the U.S. that Samsung Electronics Co. was considering for a new semiconductor plant.

The Journal reported that the South Korean electronics manufacturer was considering an investment of as much as $17 billion to build a chip-making factory in Arizona, Texas or New York. The newspaper cited documents it had viewed and people familiar with the company’s plans.

While much of the research behind new semiconductor chip designs is conducted at home in the U.S., Schumer said the vast majority of chip manufacturing is now done abroad.

“That will give countries like China complete control of our economy,” he said. “... If we don’t prevail in these key industries, China will set all of the rules and the ground rules. They’re an authoritarian country. It’s going to relate not only to our economic domination, but the prevailing of our political democracy and freedom, so it has ramifications across the board, very important ramifications.”

Schumer said he’s spoken with the CEOs of five prominent semiconductor manufacturers — Texas Instruments, Micron, Intel, Samsung and GlobalFoundries — and encouraged them to invest in production facilities at the STAMP site.

“I’m very hopeful we can get one of them here,” Schumer said. “There are no guarantees, but I’m telling all of these CEOs as the author of this legislation, I’d really like to see them come here.”

The STAMP site moved closer to securing its first tenant earlier this year when Plug Power Inc., a leading producer of hydrogen fuel cells and related infrastructure, announced it would build a $230 million liquid hydrogen production facility at the site. The facility is expected to create 68 full-time jobs at an average salary of $70,000 plus benefits.

Jim Krencik, director of marketing and communications for the Genesee County Economic Development Center, said the company is in the process of seeking site plan approvals from the Genesee County and town of Alabama planning boards.

Should Plug Power’s company’s planning and approvals process go smoothly, Krencik said the earliest the company is likely to have a functioning facility at the site is some time in 2023.