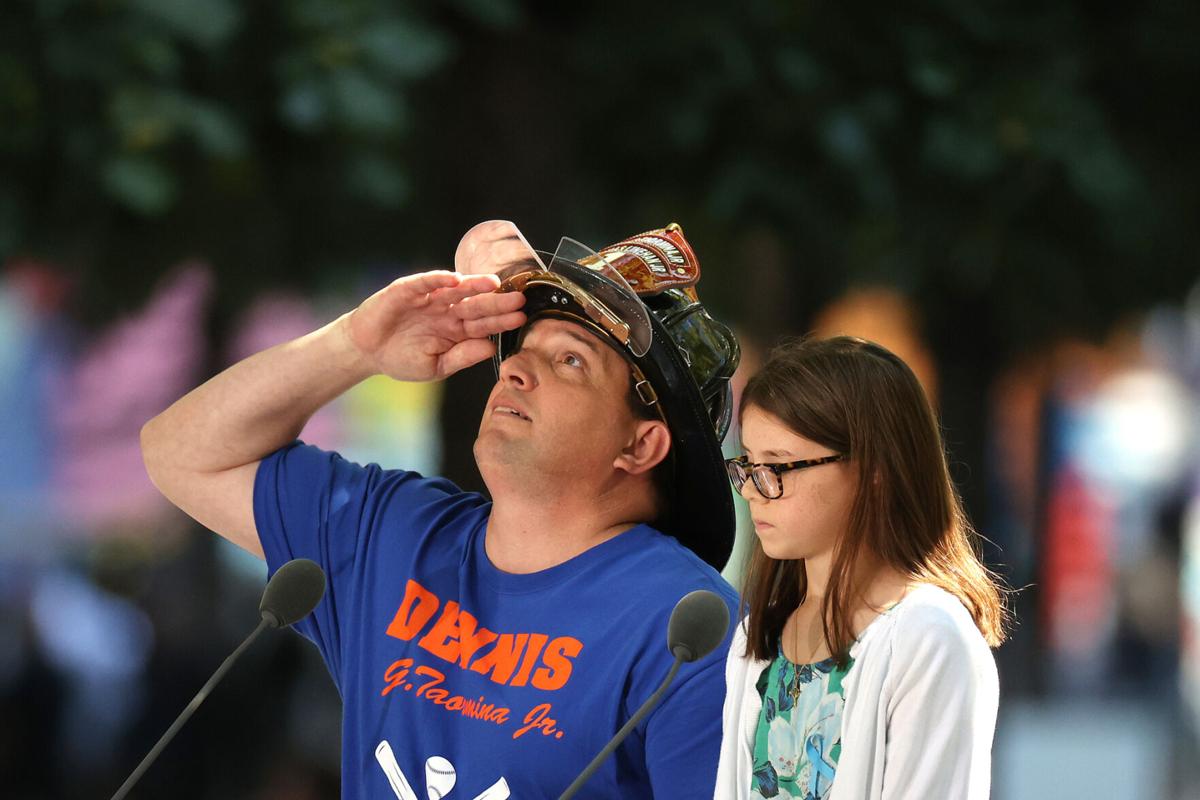 A family member of East Rutherford Fire Department volunteer firefighter Dennis G. Taormina Jr. and his brother-in-law, Thomas V. Linehan Jr., salutes after reading the names of those killed in the 9/11 attacks and in the 1993 World Trade Center bombing during the annual commemoration ceremony at the National 9/11 Memorial and Museum on Saturday, Sept. 11, 2021, in New York. Taormina and Linehan both worked for Marsh & McLennan and died in the attack. (Chip Somodevilla/Getty Images/TNS) 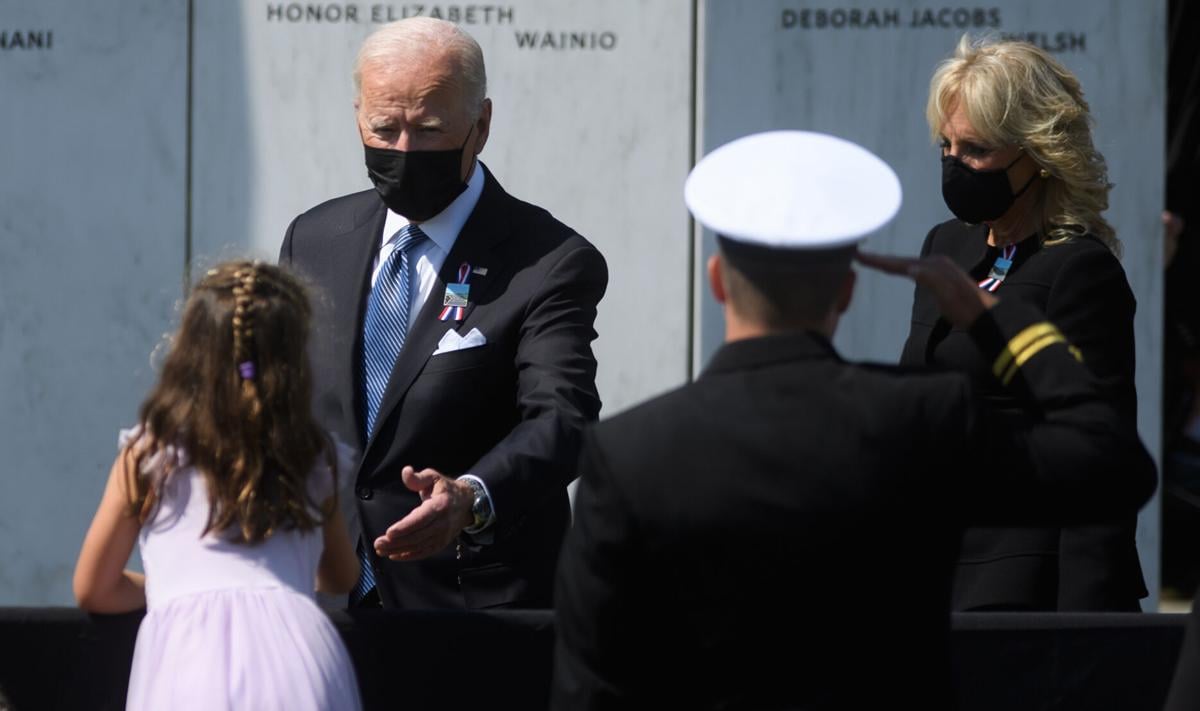 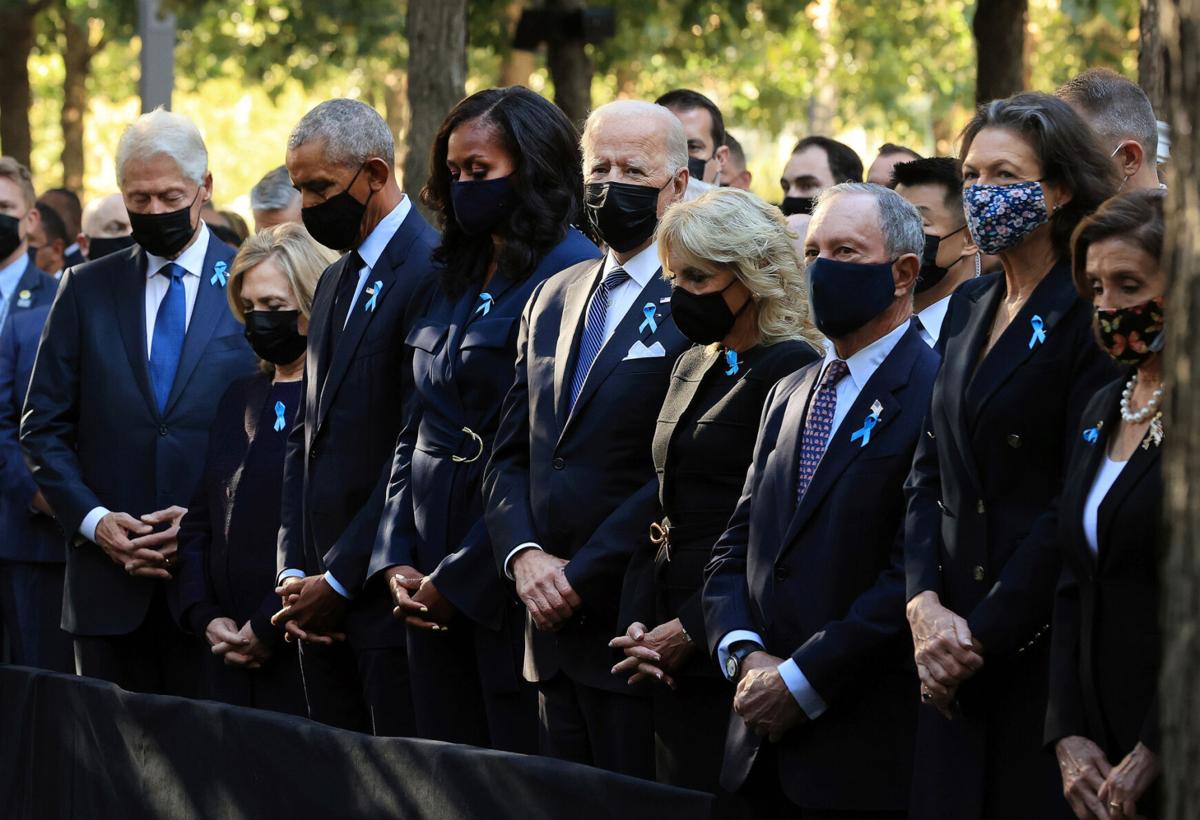 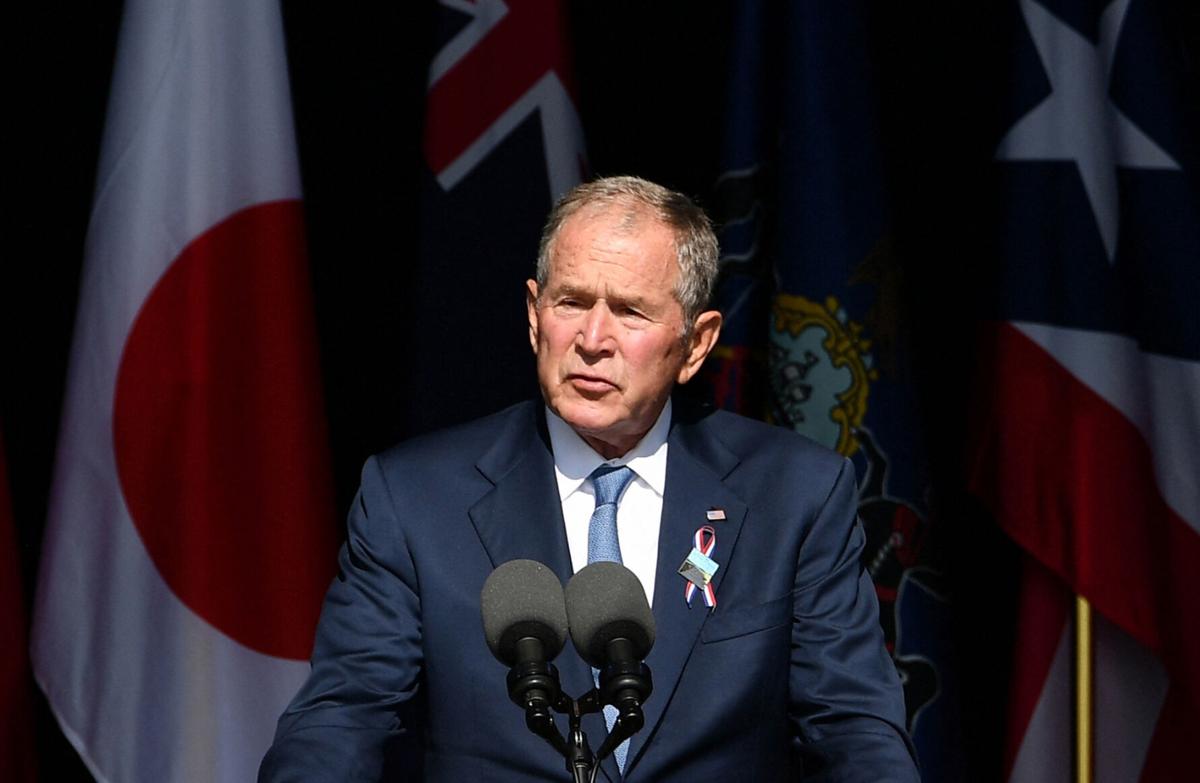 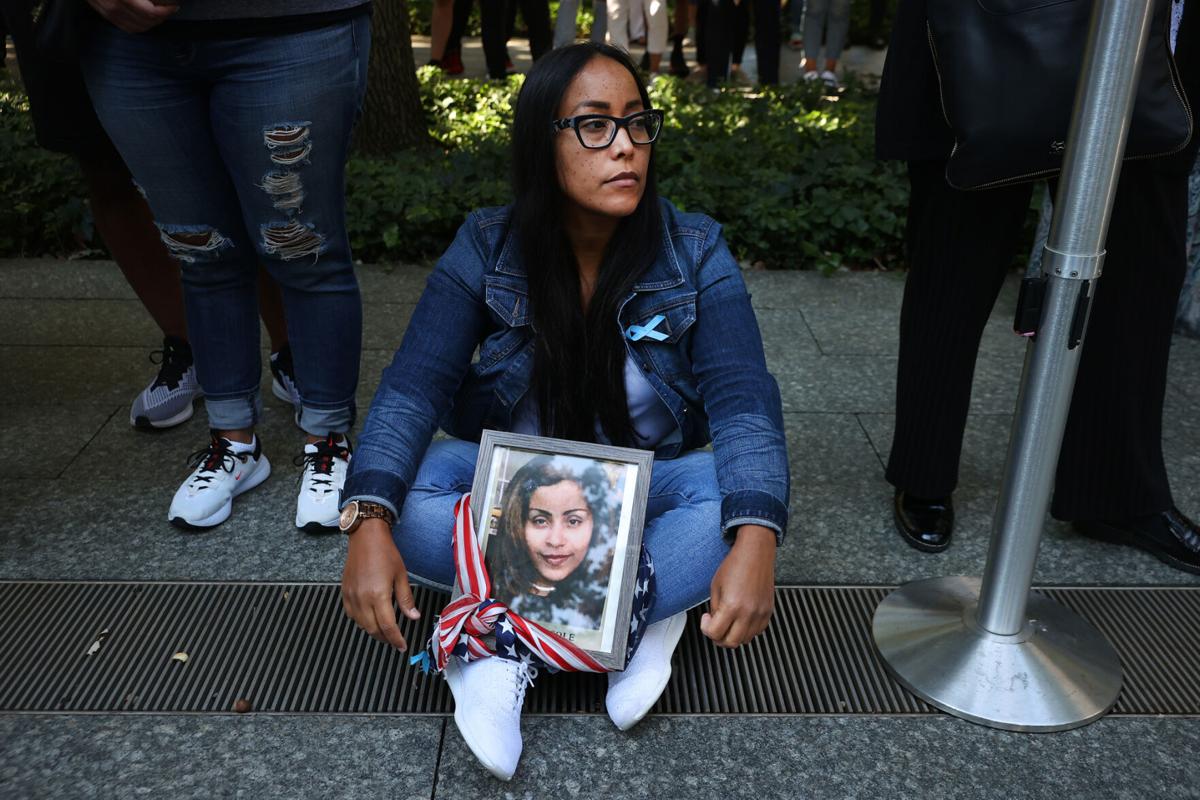 A family member of East Rutherford Fire Department volunteer firefighter Dennis G. Taormina Jr. and his brother-in-law, Thomas V. Linehan Jr., salutes after reading the names of those killed in the 9/11 attacks and in the 1993 World Trade Center bombing during the annual commemoration ceremony at the National 9/11 Memorial and Museum on Saturday, Sept. 11, 2021, in New York. Taormina and Linehan both worked for Marsh & McLennan and died in the attack. (Chip Somodevilla/Getty Images/TNS)

(TNS) – Twenty years on, against a backdrop of extraordinary political divisiveness, Americans on Saturday remembered the 9/11 attacks, commemorating the deadliest terrorist strike on U.S. soil with the austere tolling of bells, the soaring strains of “Amazing Grace” and the somber recitation of names of the dead.

The landmark anniversary, shadowed by a pandemic that has killed nearly 660,000 Americans and arriving just a dozen days after the formal end of the country’s longest war, prompted an outpouring of grief for the nearly 3,000 people killed on Sept. 11, 2001, when four hijacked U.S. passenger planes were wielded — unfathomably, still — as weapons.

The 2001 attacks galvanized an outpouring of unity and solidarity in the United States. But two decades later, the anniversary showcased myriad ways in which the nation remains wounded, in large part from within, even as it celebrated heroism and resilience.

The degree of national polarization was particularly evident in former President George W. Bush’s pointed comparison of domestic extremists like those who stormed the U.S. Capitol on Jan. 6 with the 9/11 masterminds that he sought to hunt down after the attacks.

“In their disdain for pluralism, in their disdain for human life, in their determination to defile national symbols, they are children of the same foul spirit,” he told a gathering in Shanksville, Pa., where one of the commandeered planes crashed. “And it is our continuing duty to confront them.”

As Americans mourned, world leaders again offered up sympathies for the occasion, though perhaps tempered by the adversity suffered by allies in American-led wars that followed the attacks. In Kabul, where the final U.S. troops departed Afghanistan on Aug. 30, Taliban fighters patrolled the streets, flying their black-inscribed white flags.

At ceremonies by the footprint of the fallen towers of the World Trade Center, at the Pentagon and at a green field in Shanksville, the bereaved stood and spoke, unearthing memories like splintered shards, describing yet again to strangers the timbre of a loved one’s voice or the quirk in their smile.

And some of those too young to have experienced the day told of how it had nonetheless marked their lives.

“We love you, Uncle Chris,” said the young niece of New York City firefighter Christopher Mozzillo, speaking at the Manhattan ceremony held yards from the spot where he and so many others died. “Even though I never met you in person, I still miss you a lot.”

Even the day’s sunny weather in the Northeast served as a poignant reminder of cataclysm coming out of a long-ago clear blue sky. At all three main commemorations, the slow reading of names, in sometimes tear-choked tones, took on a hypnotic quality. In New York, the sorrowful litany lasted more than four hours.

In keeping with the elegiac tone, Bruce Springsteen strummed an acoustic guitar before the New York crowd. “Death is not the end,” he sang.

But organizers largely kept the spotlight on those who lost loved ones. Although he visited all three sites, President Joe Biden chose to not speak at any of the events, with the White House instead releasing a video address on the eve of the commemorations.

In those remarks, Biden, no stranger to personal tragedy, invoked the importance of confronting loss and sorrow together. “We learned that unity is the one thing that must never break,” he said.

Commemorations in New York, Virginia and Pennsylvania tracked with the attacks’ terrible timeline.

That act of heroism, which prevented the hijackers from hitting another target, was hailed by Vice President Kamala Harris. Speaking at the Pennsylvania memorial, she said the story of Flight 93 was a monument to “the courage of those on board, who gave everything they possibly could.”

Thousands of miles from where those events played out two decades ago, hundreds of smaller, humbler observances took place. Across the country, people gathered in shaded community parks and sunlit town squares, reflecting and remembering.

In Dallas, Ga., a small city about 30 miles northwest of Atlanta, about 150 people observed a moment of silence and placed red-white-and-blue wreaths of roses and carnations around a commemorative plaque. The Paulding County Sheriff’s Office chaplain, Joe Meeks, cited biblical verse to pay tribute to fallen firefighters, police officers and other first responders in New York.

“’Greater love hath no man than to lay down his life for a fellow man,’” he said.

As the events of 2001 begin to recede from living memory, some educators and nonprofit groups want to make sure a new generation understands their wrenching significance. In Los Angeles, 16-year-old Edan Saedi, along with a group of peers, stood on the steps of City Hall and read out the names of some of those killed that day.

“Those were people who had stories, who had lives,” said Edan, who first learned of 9/11 in an elementary school storybook about a firefighter.

Ordinary Americans paused in their day, thinking of people who died when doing something as ordinary as working office jobs. In Texas, Brenda Johnson passes by a memorial to the attacks, with a chunk of steel beam from the fallen towers, every day that she’s headed to work at a McDonald’s on the campus of the University of Houston.

“We could have been one of those people, a pedestrian just walking by” when disaster struck, she said.

In Afghanistan, the diplomats and troops who for years observed the attacks’ anniversaries without fail in the heavily fortified U.S. Embassy and in far-flung field outposts have now departed. For Afghans left behind as the once-vanquished Taliban returned to power, the Americans’ legacy inspires mixed emotions.

He pointed to advancements in women’s rights, civil rights, the creation of a middle class and the rise of free media. But he believed that in the political realm, the U.S.-led war effort failed in large part because the West supported “very corrupt politicians who had no connection to the people.”

In the United States, the day’s solemnity did not provide a respite from political rancor.

At the New York event, Biden and first lady Jill Biden stood shoulder to shoulder with former Presidents Barack Obama and Bill Clinton and their wives, but Trump skipped the centerpiece anniversary event in his hometown.

He did visit a fire station and police precinct near Trump Tower in Manhattan, where he criticized Biden for a disorderly exit from Afghanistan, echoing days of heckling on the subject. “It was gross incompetence,” he said.

Biden, after visiting a volunteer firehouse in Shanksville, defended the withdrawal, asking, “How else could you get out?” Speaking to reporters, he scoffed at Trump’s contention last week that Robert E. Lee, the defeated Confederate general, could have done better.

Biden expressed incredulity at the coarseness of current political discourse, seeming to reference a vulgar flag that was visible during his recent trip to view damage from Hurricane Ida in New Jersey. “They think this makes sense,” he said, “where you ride down the street and someone has a sign saying ‘F so and so’?”

Bush’s public remarks at the Pennsylvania memorial, meanwhile, appeared to be a thinly veiled reference to the Jan. 6 Capitol insurrection by Trump supporters. “We have seen growing evidence that the dangers to our country can come not only across borders, but from violence that gathers within,” Bush said. Biden later praised the former president’s speech.

Again and again at the day’s commemorations, people spoke of the strange sensation of so much time having passed — and also almost none at all.

“Twenty years feels like an eternity,” said Lisa Reina, who was left widowed and eight months pregnant when her husband, Joseph Reina Jr., was killed in the north tower. But now, she told the crowd at the Ground Zero commemoration, “it still feels like yesterday.”

In ways small and large, the daily lives of Americans changed, whether through the now-familiar routine of endless queues at airports, or piercing awareness of the suspicion with which Muslim fellow citizens are still viewed by some. For tens of thousands of families who saw sons and daughters go off to war, the day was an irrevocable reminder of immense sacrifice.

In the attacks’ aftermath, Melinda Kane, a mother and teacher in Cherry Hill, N.J., watched her son Jeremy, then 14, physically transform himself with workouts and running, quietly preparing to join the military.

Jeremy’s mother, who is now 64, wants to believe he did not die in vain.

“I know that hospitals were built, schools were built, the infrastructure was improved, and that a generation of women and young girls have lived a different life,” she said. “History’s not done yet.”

After a long and emotionally taxing day, nightfall in New York City brought a final tribute, enacted annually: a pair of bright-blue light beams, created as a public art installation, pierced the darkened sky. Reaching heights of up to four miles, they illuminated the space where the towers had stood.

King reported from Washington, Jarvie from Atlanta and Dallas, Ga., and Megerian from New York and Shanksville. Times staff writers Nabih Bulos in Kabul, Afghanistan, Molly Hennessy-Fiske in Houston and Paloma Esquivel in Los Angeles contributed to this report.