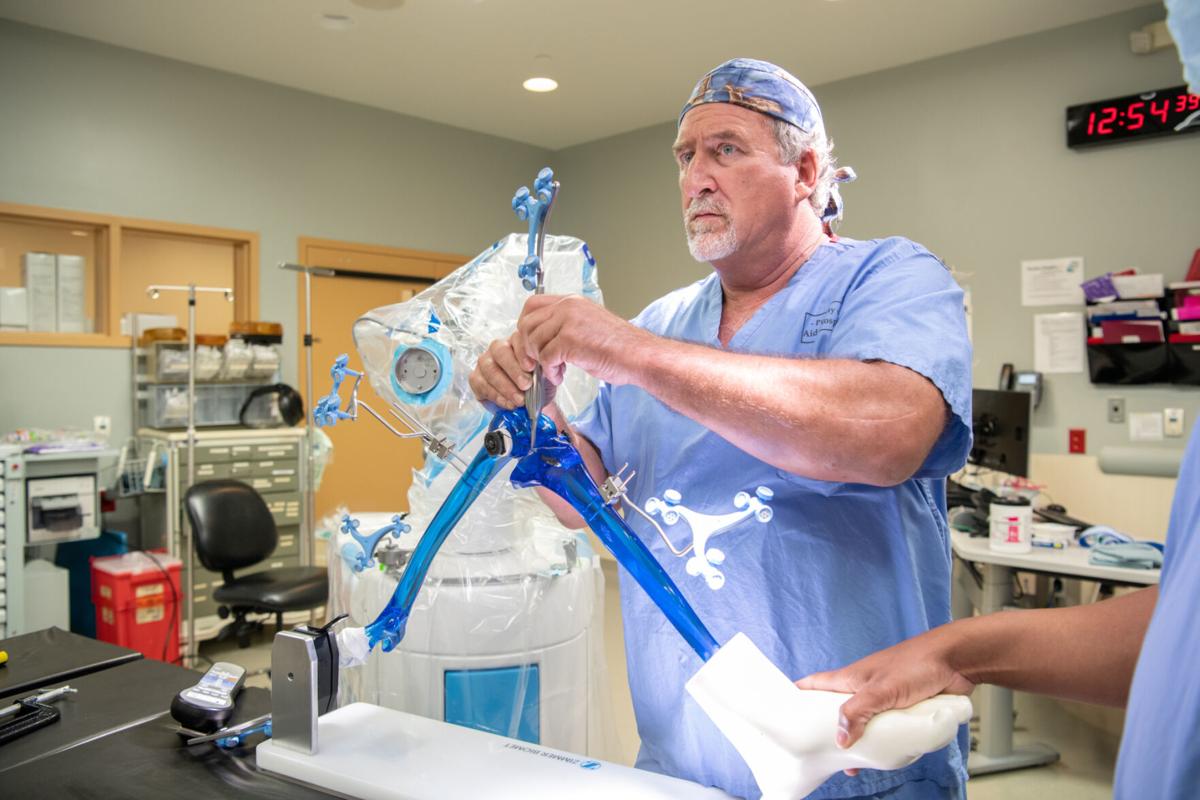 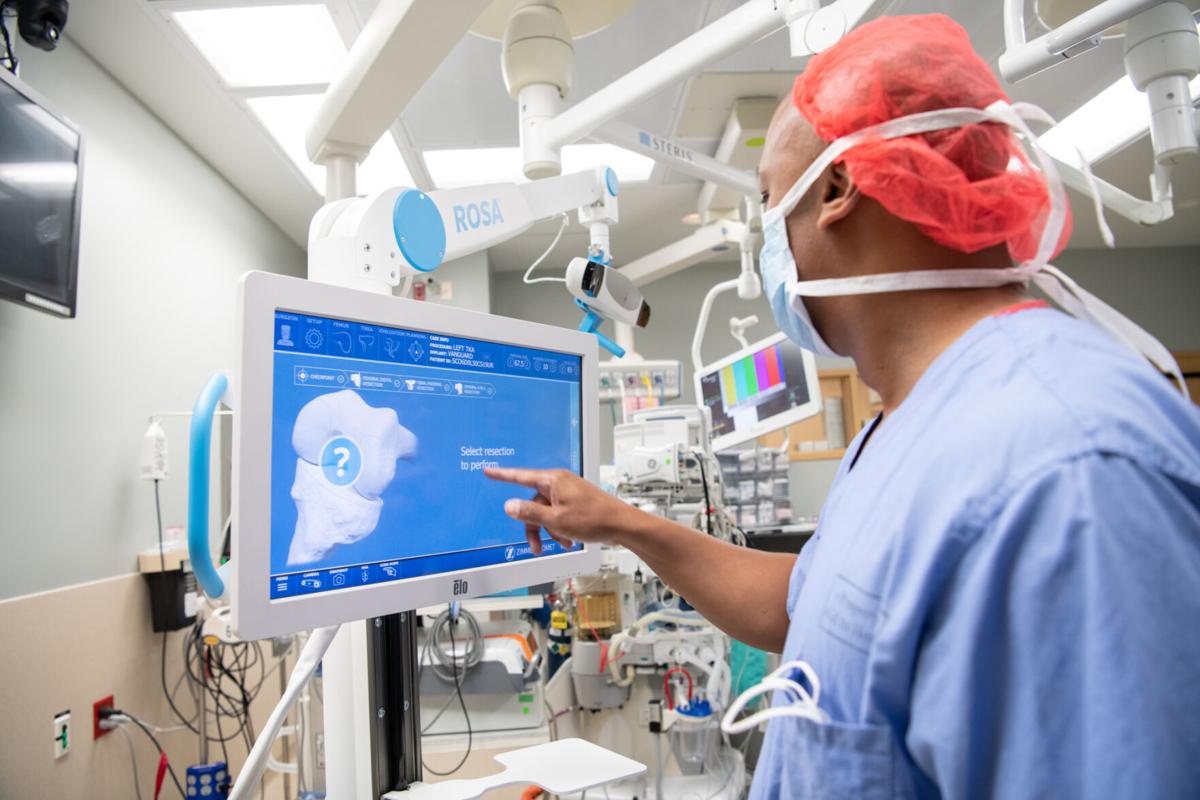 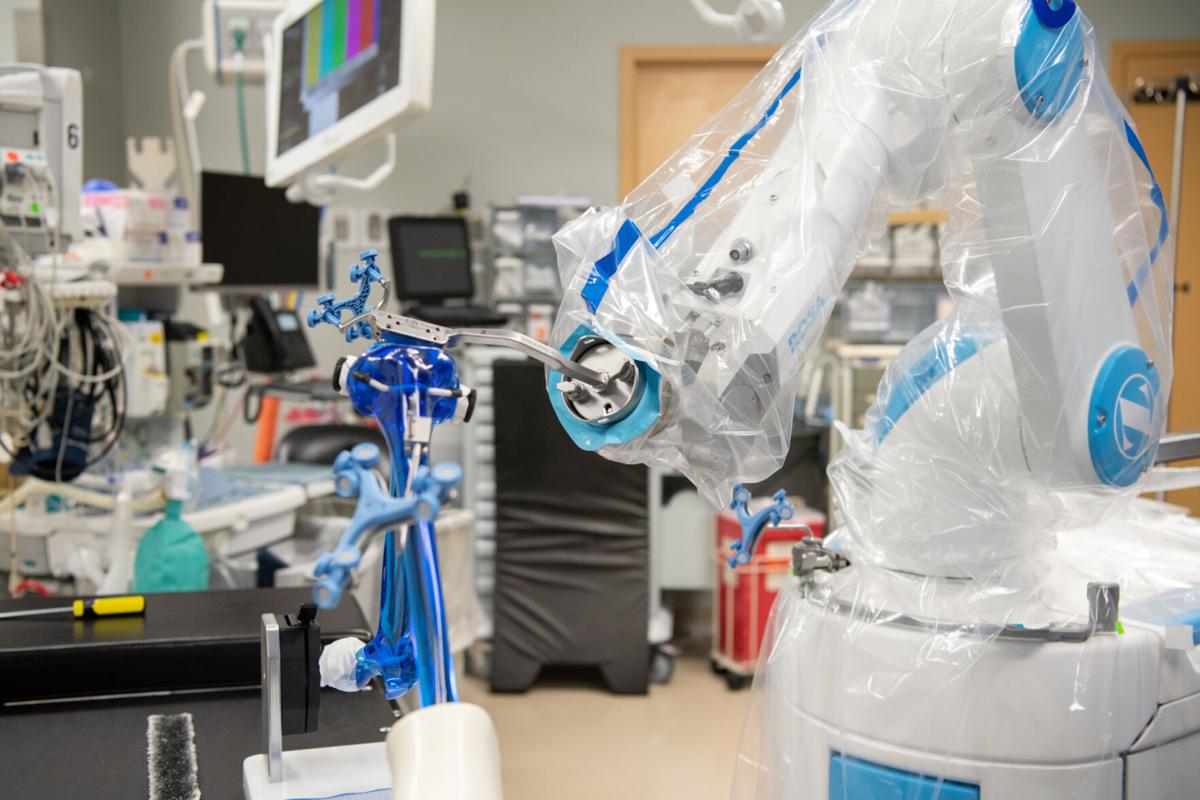 The first procedure was done Friday by Dr. Matthew Landfried, chief of orthopedic surgery for UMMC and a Genesee Orthopaedics surgeon. It was one of two such procedures he did that day with the help of a Robotic Surgical Assistant (ROSA) Knee System.

“The idea is more precision, more reproduceablity, more ligament balance, less pain, faster recovery,” Landfried said Tuesday afternoon. “To us, and hopefully for the local people. what’s a big deal is we have four robots in the (Rochester Regional Health) system. That hopefully lets people know this hospital (UMMC) is on par with the city hospitals. Our capability in orthopedics are equal to the city hospitals. The fact that the system chose me to start it is sending a message that hospitals out here are capable of the same types of procedures ... as the city hospitals. People don’t have to travel to get that kind of quality. I was honored to be picked to do the first one in the (RRH) system.”

ROSA provides a greater degree of accuracy for the orthopedic surgeon and a quicker return to daily activities for the patient, RRH said in a press release. Before surgery, ROSA’s 3-D model virtually tracks how the patient’s knee moves in real time. If a patient’s knee moves even a fraction of an inch, the robot will know and adjust accordingly, according to the press release. This data provided enables surgeons to use computer and software technology to move surgical instruments executing the procedure with an extremely high degree of accuracy.

“What the robot allow you to do is ... it measures rotation and balance and angles. It makes those adjustments for you,” Landfried said. “You still have total control and you set the parameters.” It also measures the tightness in the ligaments. It’s called ligament balance. You can make live adjustments to the ligaments also.

“No two patients are the same. The robot doesn’t operate on its own, but is instead used to assist us in making an accurate incision. The ROSA System personalizes surgical procedures to each individual patient’s anatomy, allowing for greater precision and accuracy during the procedure.”

Aside from less pain and a quicker return to daily activities than with traditional knee replacement surgery, this minimally invasive procedure offers the following benefits: shorter hospital stay, increased longevity of the new joint, reduced blood loss and reduced injury.

“It sets the guide exactly where you need to cut the bone. It gives you much more precision,” Landfried said of the robotically assisted procedure. “It’s exciting technology. It says a lot that Rochester Regional Health was willing to make that kind of investment in technology. for the people here, because it is a substantial investment. it’s good that they are of that mind and want to be at the top and working toward becoming a robotic center for excellence.”

The four hospitals which each have a ROSA Knee System, made by Zimmer Biomet, are UMMC, Unity Hospital and Rochester General Hospital, both in Rochester, and Newark-Wayne Community Hospital in Newark.

Landfried said Dr. Richard Hoy performed this procedure Tuesday at UMMC and more procedures are on the schedule for next week.

“I have several next week. Dr. Nick Valente and Dr. Nick Loffredo will also be doing them, maybe as soon as next week,” Landfried said.

Landfried said robotic assistance is an option for a patient, but the patient is not required to choose it.

RRH is the first healthcare system in the Rochester region to perform a robotically assisted total knee replacement.

“We are thrilled to bring this emerging technology to our rural hospital and provide local access to this level of care,” said Dan Ireland, UMMC president. “Having teams that embrace this advanced technology is an extreme benefit to our patients, providing them with the best possible outcomes and the care they need, close to home.”

Landfried said with ROSA, local surgeons will be able to perform other procedures,

“Starting the first of the year, we’ll be able to do half-knees, which is becoming more and more popular. A lot of knees wear out on one side,” he said. “It’s (half-knee replacement surgery) better for some younger ages,” he said. “It’s going to be expand to half knees, whole knees, shoulders and hips.”

Larry Smith, a rep for Zimmer Biomet, which made the ROSA Knee System, looks at information on a ROSA screen.

The first time ROSA was used in a surgery at United Memorial Medical Center was last Friday.