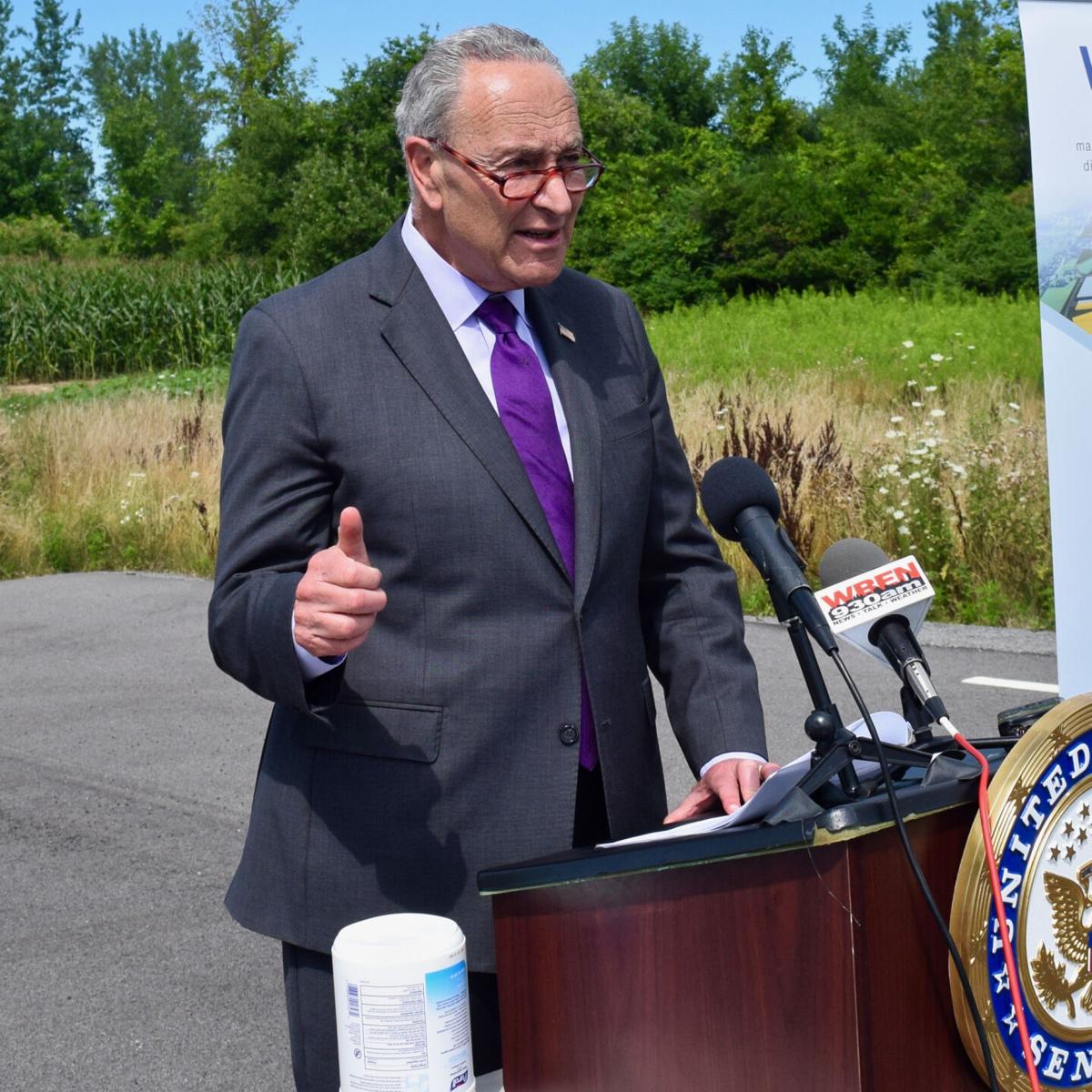 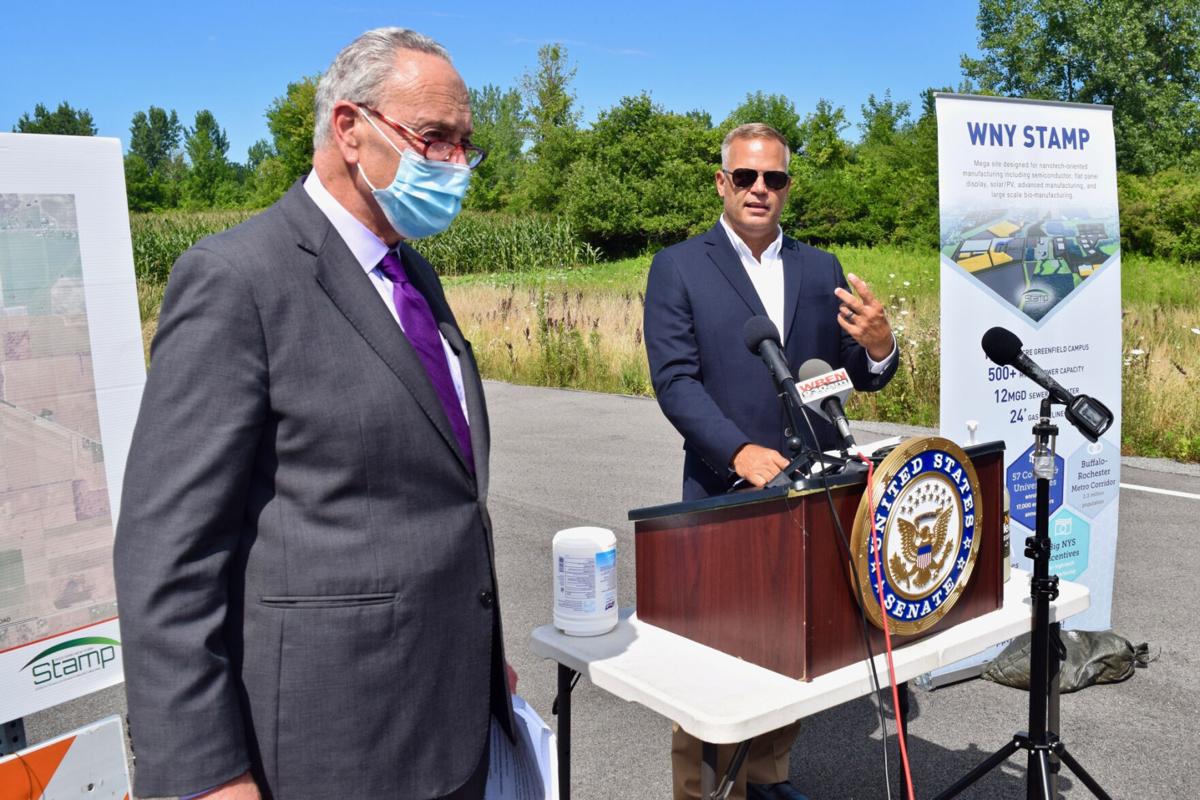 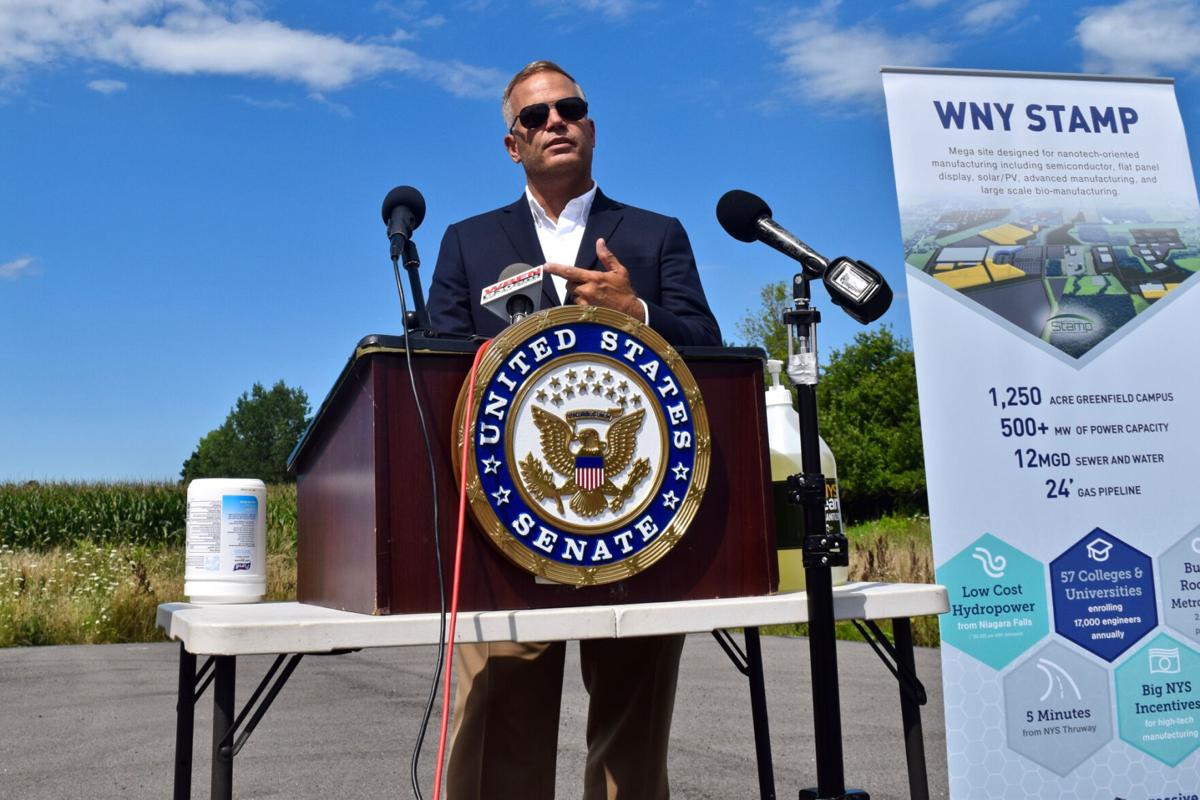 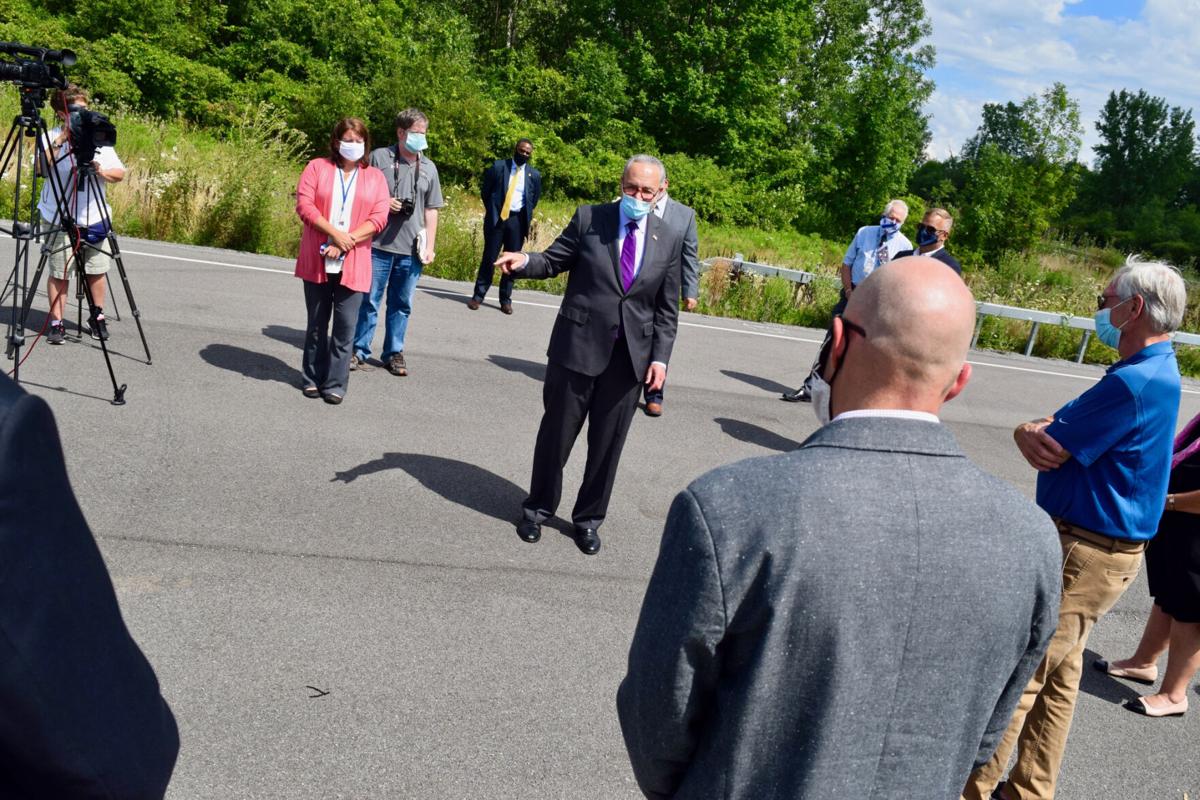 Alex Brasky/Batavia Daily News U.S. Senator Charles E. Schumer speaks to local officials about a potential jolt to the U.S. semiconductor industry. During his time at the STAMP Campus in the town of Alabama, Schumer also spoke about the Muckdogs’ run in Batavia being finished.

Alex Brasky/Batavia Daily News U.S. Senator Charles E. Schumer speaks to local officials about a potential jolt to the U.S. semiconductor industry. During his time at the STAMP Campus in the town of Alabama, Schumer also spoke about the Muckdogs’ run in Batavia being finished.

In what he described as a “three-pronged push,” Schumer first called for the swift passage by Congress of the final Fiscal Year 2021 National Defense Authorization Act (NDAA), in which the senator successfully included an amendment that will continue U.S. leadership in semiconductor manufacturing and revitalize innovation in the global microelectronics sector.

“The good news is it has now passed the House, passed the Senate. This is going to pass,” he said. “The Senate and House have to come together, but on this one, no partisanship. Then the money will start flowing and they’re looking for new, big sites.

“The bill will be signed in a month or two and then they will devise a plan to get the money going,” Schumer said. “We’ll probably work on that so it favors us. There’ll be money available, I’d say, in about a year.”

Schumer said he didn’t think there would be a problem getting President Donald Trump to sign the bill. However, he added, “In the NDAA bill, they put in, bipartisan, that they would take the confederate names off military sites.

“At one point, he said he might veto the bill, but he’s been very quiet. He’s not going to veto a bill with a pay raise for soldiers and $700 billion for the military. No, I think he’ll sign it,” Schumer said.

In the new defense bill, Schumer said, there is great news for Genesee County and the region.

“I have worked, in a bipartisan way, to get a major amendment that makes a massive federal investment into our nation’s semiconductor manufacturing. It’s about $25 billion. It’ll go to five or six new plants around the country. I will work very hard to see that STAMP is one of them.”

Second, he announced his push for a $1 million Northern Border Regional Commission (NBRC) grant for STAMP, which needs to construct a new sewer line to complete its wastewater system infrastructure.

The sewer is the final piece of infrastructure that will make the 1,250 acre STAMP campus shovel-ready for manufacturing facility construction.

Third, Schumer will urge the Department of Defense (DoD) to consider the STAMP campus as the agency looks to partner with industry to develop new domestic semiconductor fabs. Combined, these efforts will provide unprecedented support for the U.S. semiconductor industry and create opportunities to bring hundreds of jobs to Genesee County and Upstate New York, Schumer said.

“One of the great things we’ve learned from this (COVID-19) pandemic is how we have to make in America. Too many things that are vital to our economy are made overseas. It puts us at the risk of other countries. We learned this with the pandemic, because a lot of the materials and the chemicals that are needed for testing are overseas, some of them in China,” he said. “We are the great thinkers of the semi-conductor industry. It was created in America and its best innovations are in America.

“Many Asian countries, particularly China, steal our intellectual property, but more importantly, that they spend billions of dollars investing in companies,” Schumer said. “As a result, semiconductors, which are one of the most important parts of our new industrial society — they go into everything — we are losing ground.”

“That means, if we have a fight with China, China could stop the flow of semiconductors and kill us,” Schumer said. “China could do that to us over and over again. It is generally the view, not only of our leading economists, but also our leading generals and admirals, that this is vital to national security ... Now, semiconductors are needed in the most advanced defense equipment, where it’s communications ... or planes or ships or anything. DoD was behind this for security, but so were many of our major companies that used semiconductors for their materials.”

With an NBRC grant STAMP will be able to construct the last missing sewer line needed for shovel-ready status. This main sewer line would support new businesses that locate at STAMP.

Within the last month, DoD officials participated in a meeting Schumer convened with STAMP officials. He said the meeting was to position STAMP to capitalize on new opportunities through the DoD to attract semiconductor research and manufacturing facilities to STAMP.

Schumer pointed out that there’s been success in New York with GlobalFoundries in Saratoga County, one of the top three or four sites in making semiconductors.

“They employee about 3,000 people in good-paying jobs. They think this is going to grown them,” he said. “But, we’re going to need new sites.”

“Remember, these projects are $10 (billion) to $15 billion each. Only one has landed in the United States and that’s GlobalFoundries ...” Hyde said. “The real issue is, it was cost. There’s been a cost disadvantage in the U.S. that the Asian companies have been underwriting these for years.”

Hyde said the NBRC grant, if STAMP gets it, will level the playing field relative to cost, which would make STAMP “incredibly competitive.”

Hyde told Schumer he can’t wait until STAMP works with him to land one of the semiconductor companies.

Schumer noted that, like STAMP, Global Foundries is about 30 or 40 miles from a large city.

Hyde said, “The beauty of that is, you have some privacy. They (a semiconductor fab) can do some high-end things. DoD, we’d love them ... to work with us and stand a trusted fab up.

“This gets you that security and you’re also able to draw workforce and university resources from New York’s second- and third-largest metro areas in a normal commute pattern,” Hyde said.

Schumer was asked if he has spoken to new 27th District Congressman Chris Jacobs and whether Jacobs supports what he is doing. Schumer said he likes Jacobs and has worked with him before.

“I’ll work great with Chris Jacobs and he will help us, I guarantee you,” the senator said. “I haven’t talked to him because this is new ... but I will work with him and he’ll be great — a big improvement, I would say.”

Hyde said, “Senator Schumer’s leadership in the Senate’s passage of the American Foundries Act as a part of the National Defense Administrative Act will help put STAMP over the finish line as it will make available necessary funding to develop and construct the final pieces of infrastructure to stand up multiple semiconductor manufacturing fabs and along with it the creation of thousands of good paying, family-sustaining jobs to Genesee County and the Western New York and Finger Lakes regions. Attracting semiconductor and similar industries at STAMP will result in as much as $10 billion to $15 billion of private sector investment all of which will be enabled by this game-changing legislation.”

Topics other than the NDAA and NBRC grant included the Minor League Baseball Class A Batavia Muckdogs. Regarding whether the Muckdogs will play again in Batavia, Schumer said, “I hope so.”

“During COVID, everything slowed down. But, I sat down with the minor leagues and Major League Baseball. We have four teams at risk — the Muckdogs here in Batavia, we have the Rumble Ponies in Binghamton, the actual Yankees in Staten Island and the Doubledays in Auburn,” he said. “I’m working to save them all.”