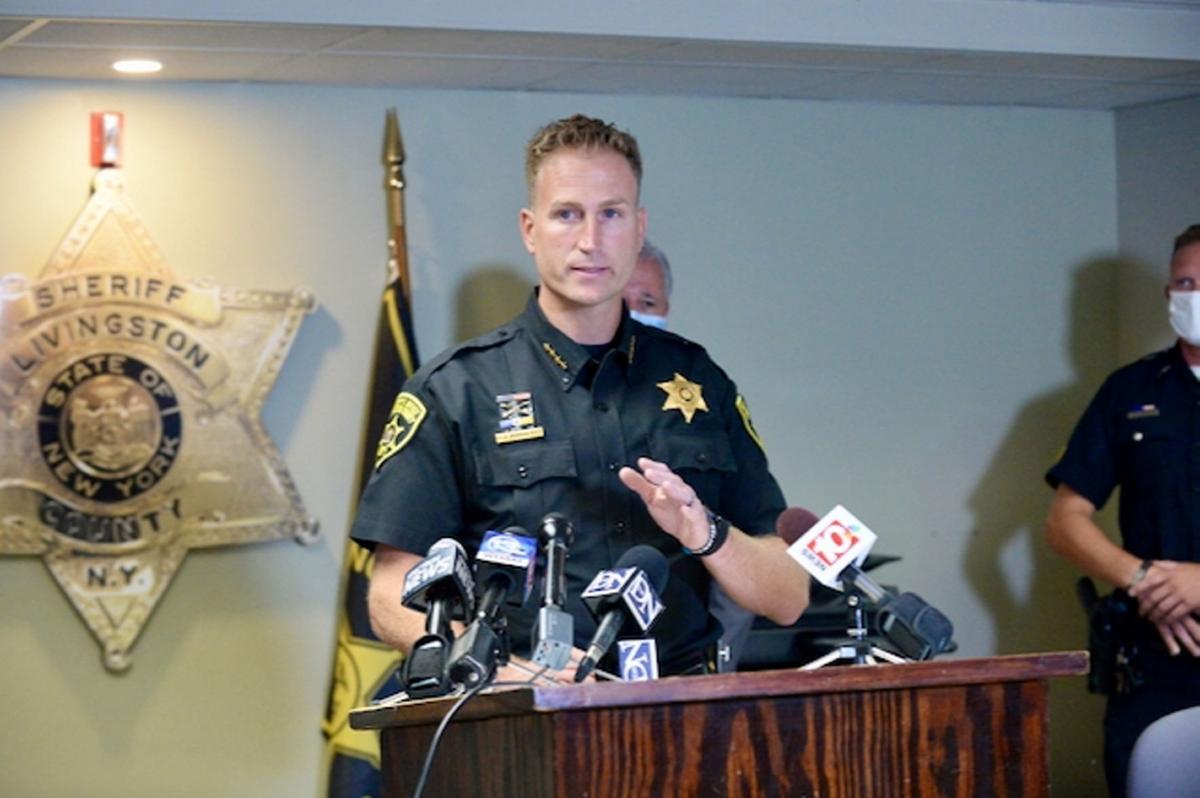 Alex Brasky/Batavia Daily News Livingston County Sheriff Thomas Dougherty spoke with the media on Tuesday afternoon regarding the semi-truck chase that ended in the death of truck driver, Joshua Blessed of Harrisonburg, Virginia. 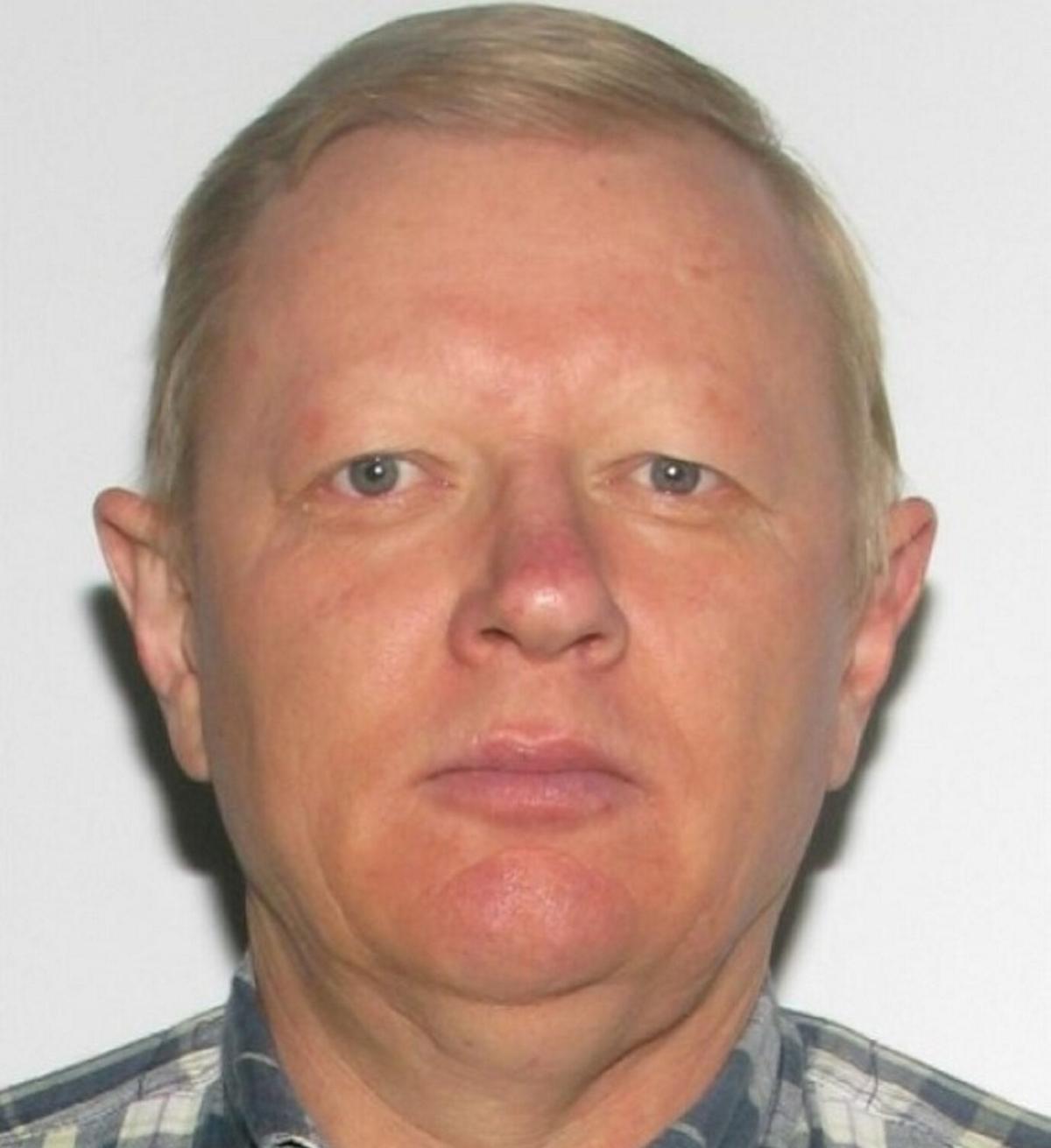 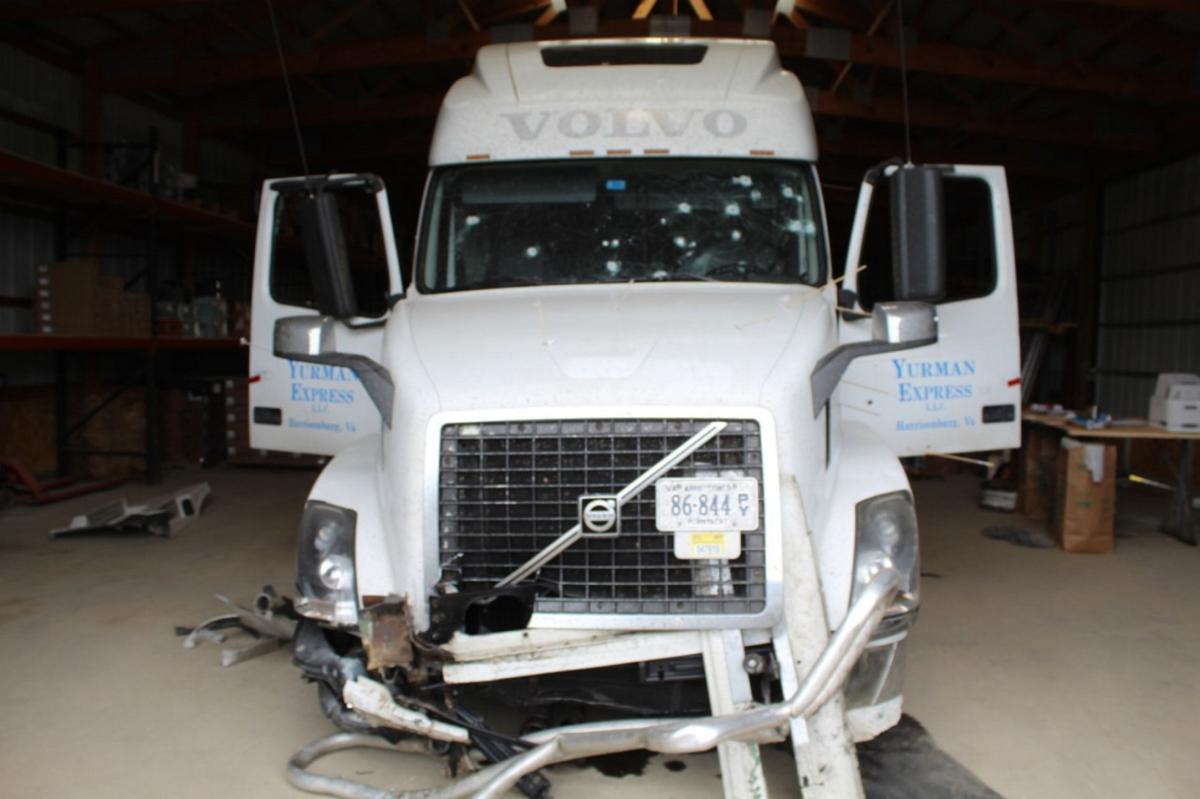 Joshua Blessed died after being shot four times after leading police on a violent rampage in a tractor trailer. The entire incident took 75 minutes. 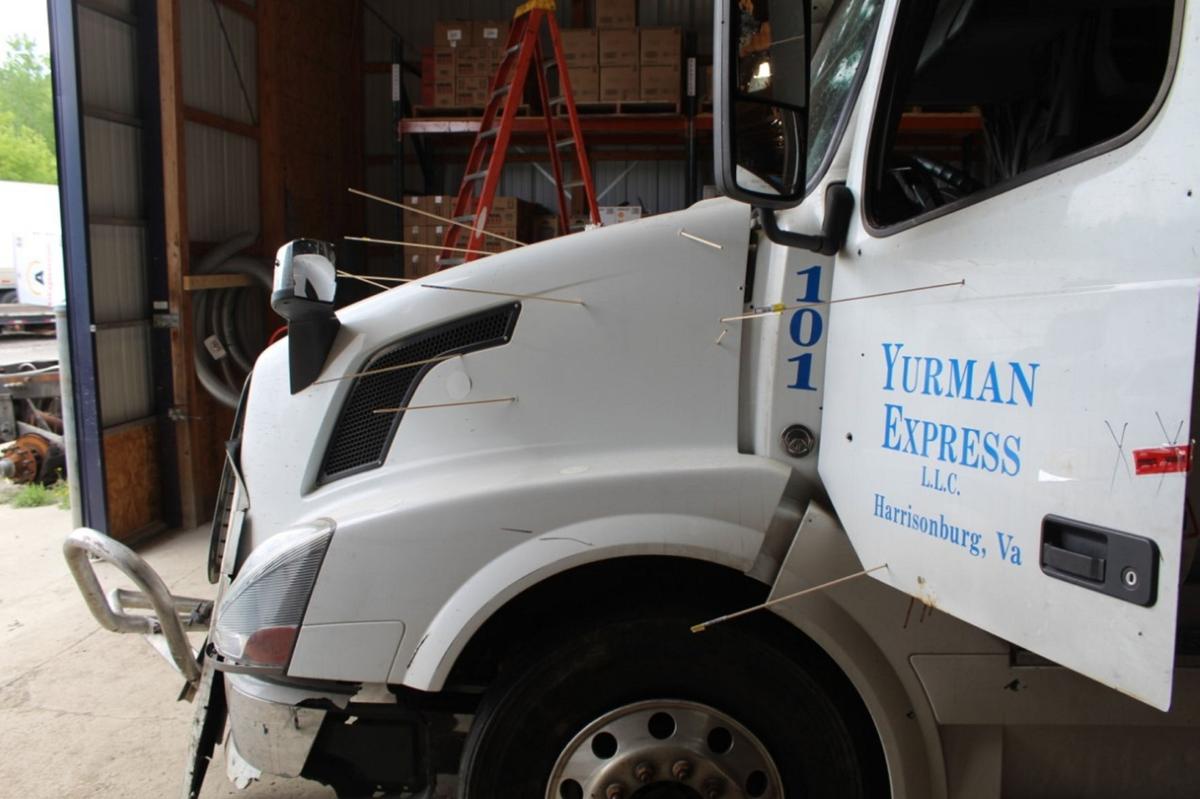 Markers on the truck driven by Joshua Blessed indicate where it was struck by bullets during a May 27 chase and shootout with area law enforcement.

Alex Brasky/Batavia Daily News Livingston County Sheriff Thomas Dougherty spoke with the media on Tuesday afternoon regarding the semi-truck chase that ended in the death of truck driver, Joshua Blessed of Harrisonburg, Virginia.

Joshua Blessed died after being shot four times after leading police on a violent rampage in a tractor trailer. The entire incident took 75 minutes.

Markers on the truck driven by Joshua Blessed indicate where it was struck by bullets during a May 27 chase and shootout with area law enforcement.

Dougherty based that conclusion — which he stressed was solely his opinion — on evidence seized by FBI agents from Blessed’s private vehicle and a room he rented in Virginia. After executing search warrants late last month, agents recovered more than a dozen improvised explosive devices, thousands of dollars worth of ammunition, firearms — including two AK-47s, a 50-caliber rifle and a .223 caliber sniper rifle — tens of thousands of dollars in cash and instructional manuals on how to build bombs and avoid detection by law enforcement.

The Sheriff’s Office’s investigation into Blessed’s death and the chase that preceded it remains open said Dougherty, though he acknowledged it’s likely nearing its end.

“We are still working through some different leads and loose ends,” he said.

The FBI, which has been assisting the Sheriff’s Office since the night of the incident, has its own investigation into Blessed. While he acknowledged Blessed was “some type of militia extremist” who harbored “anti-police philosophies,” Dougherty referred questions on the trucker’s background and whether he was operating as a “lone wolf” or with others, to the FBI.

As the County News previously reported, hatred of law enforcement was a central theme of Blessed’s posts on a variety of social media platforms. He also wrote and spoke frequently of visions of a second U.S. Civil War he purported to have experienced and urged Godly men to form militia units to defend themselves during this war.

Dougherty likewise declined to comment on the nature of the IEDs the FBI recovered from Blessed’s rented room and private vehicle, instead referring questions to the FBI.

A spokesperson for the FBI’s Richmond Division confirmed last week the bureau’s investigation “remains open,” but declined to comment further.

Dougherty said his office’s investigation uncovered no evidence that Blessed’s actions were in any way related to the public uproar over the death of George Floyd, who died May 25 — two days before Blessed’s rampage — after a Minneapolis police officer kneeled on his neck for nearly nine minutes.

“I truly believe this day, Blessed did not plan for a major attack on law enforcement,” Dougherty said. “I think it was this traffic stop that set him off and eventually led to all the different things along the path this pursued including him shooting at us and us shooting at him.”

To the best of Dougherty’s knowledge, the FBI recovered no written manifesto, plans of attack or statement of ideals were recovered from Blessed’s home or private vehicle.

“I don’t have that information and I think I would as Sheriff,” Dougherty said. “...There’s certain questions we’re just not going to have answers to. That is common in these cases where it ends this way. We can’t interview him, we can’t find out exactly what he was thinking. Only he knows that and he’s not here to tell us.”

Blessed was first pulled over by an officer with the Le Roy Police Department on Route 5, near East Bethany-Le Roy Road, May 27 at 8:37 p.m. He refused to comply with the officer’s instructions and eventually fled in his tractor trailer, initiating a 46-mile chase that spanned three counties.

Blessed eventually entered the village of Geneseo from the north, via Route 63, before continuing east, via Route 20A, to Exit 8 of Interstate 390. Dougherty, who was following behind Blessed during the pursuit, recalled how relieved he was when Blessed decided to leave 20A and take the southbound entrance ramp to the Interstate.

“When you’re going down 20A, there’s homes all over it,” he said. “… I felt like we could take action on the interstate and really engage him there and it would ultimately be a shootout between us and him and no civilians.”

But Blessed had other ideas. After driving south on the interstate for about seven miles, he took a u-turn and started driving back north toward Exit 8, where he’d just come from. Had he continued north on 390, passing under the Route 20A overpass in the process, five deputies stationed on the bridge would have been well-positioned to fire down on Blessed, said Dougherty.

“If he went under the bridge, it would have ended right there,” Dougherty said. “He ultimately exited and so all five of... our members had to reassemble in different places where they could keep themselves as safe as possible but also be able to get good shots onto him in the large truck.”

After exiting the interstate at Exit 8, Blessed turned left and continued southwest — again toward the village of Geneseo. Dougherty, following behind the whole time, recalled being struck by the quality of Blessed’s driving and marksmanship.

“The way he was driving that truck like a go-kart — steering the wheel, shifting gears and shooting — was something I’ve never seen,” he said. “... We knew he hit that car at Country Club (Road) and I thought ‘Man, that was a shot.’ I knew we were up against a big threat, but we needed a safe area to try to end that threat.”

Authorities would find that safe area a few minutes later on Route 20A, near its intersection with Morgan View Road. Livingston and Genesee county sheriffs’ deputies staged in that area, waited for Blessed to approach in his tractor trailer and then opened fire with long guns.

Deputies fired 48, .223-caliber rounds at this final location, said Dougherty. Blessed was struck four times: thrice in the hip and once, fatally, in the head.

After the barrage of gunfire, Blessed’s tractor trailer drifted off the roadway before coming to rest in a ditch. The firing site was chosen, said Dougherty, because of its backdrop — an empty field without houses or other buildings where no one was likely to be struck by an errant bullet.

Dougherty said the deputy who fired the shot that killed Blessed has been narrowed down to two people - one member of the Genesee County Sheriff’s Office and one member of his office. Dougherty declined to name either. Authorities were unable to retrieve the bullet from Blessed’s head because of the way it broke up on impact. Because both deputies were also firing .223-caliber rounds, investigators may therefore never be able to definitively say who fired the shot that killed the trucker, Dougherty said.

Authorities recovered a Glock, 9mm pistol from the cab of Blessed’s tractor trailer. The gun was loaded with a 17-round magazine. Six rounds remained in the magazine at the time of Blessed’s death. Another fully loaded 17-round clip was also recovered from the cab, Dougherty said.

In all, Blessed is thought to have fired a minimum of 24 rounds at law enforcement over the course of his flight, though Dougherty acknowledged it could have been more, depending on whether Blessed ditched any additional magazines along the route of the pursuit.

As he has in the past, Dougherty voiced his thanks, and shock, that no one except Blessed was killed or hurt — “not even a scratch — I mean nothing,” — during the pursuit and shootout.

“And this went on and on and — it wasn’t a five-minute ordeal,” Dougherty continued. “This was a long duration of him operating a vehicle at high speeds at different times, trying to ram cop cars, no regard for anyone’s life — not ours, not anybody else’s coming at him in the other lane. Then it escalates into bullets firing everywhere … it is just a sheer miracle.”

The entire Blessed incident, from when he was first pulled over in Le Roy until he was shot and killed in Geneseo, took about 75 minutes. But for those members of law enforcement who were called to duty that night, who pursued Blessed while taking gunfire, and who posted up behind questionable cover to try to bring his trail of terror to an end, the impact of those 75 minutes has lasted much longer, Dougherty said.

“This is an incident that — it’s a difficult one. It’s difficult to be involved in,” he said. “I’ve been worried about my guys left and right. Just because they weren’t hurt, meaning injured physically, the mental part of this is really — it’s consuming.”

Continued Dougherty: “It’s been a really difficult thing for our office to go through, but… I’m proud of all the deputies, all our partners we worked with… this is what you train for and just because we’ve never trained on something like this, the other training pays off. They were calm, they were collected and they put that into action that day.”

Blessed’s rampage by the numbers