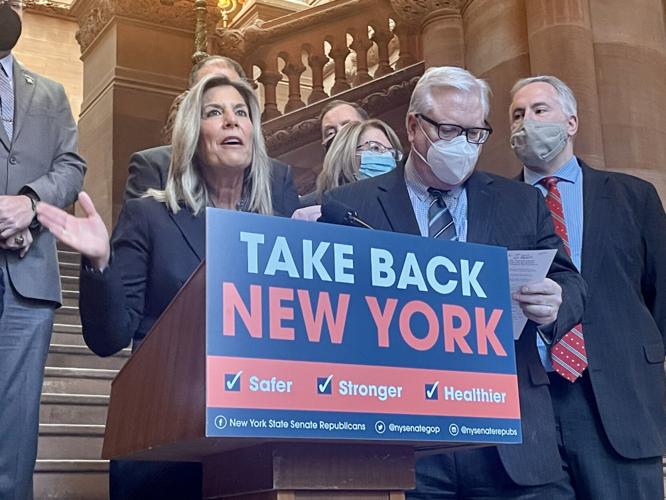 Sen. Daphne Jordan, R-Halfmoon; speaks with her fellow Republican senators in the state Capitol on Monday to unveil the minority’s economic agenda to “End the Exodus” of people leaving the state. 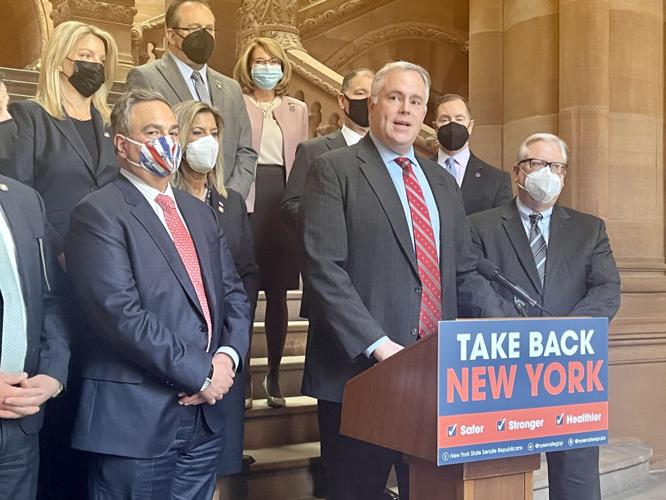 Sen. Dan Stec, R-Queensbury; speaks in the state Capitol on Monday with his conference to unveil the Senate minority’s economic agenda to “End the Exodus” of people leaving the state.

Sen. Daphne Jordan, R-Halfmoon; speaks with her fellow Republican senators in the state Capitol on Monday to unveil the minority’s economic agenda to “End the Exodus” of people leaving the state.

Sen. Dan Stec, R-Queensbury; speaks in the state Capitol on Monday with his conference to unveil the Senate minority’s economic agenda to “End the Exodus” of people leaving the state.

ALBANY — State Senate Republicans called for an “end to the exodus” during a Monday news conference.

The GOP lawmakers unveiled their general state economic plans highlighting the need to reduce the cost of living for New Yorkers as hearings on the next state spending plan begin this week.

Focusing on a 7% hike in food and transportation costs and inflation at a 40-year high — along with skyrocketing home heating oil prices and New York’s highest-in-the-nation tax burden — Republicans proposed additional middle-class tax cuts, amending the state Constitution to institute a permanent spending cap, and other measures to expand the state’s economic freedom, they said.

New York ranked third-highest of all U.S. states for the greatest population decline between 2020 and 2021, losing more than 350,000 residents.

The state’s expensive cost of living and business expenses is driving people outside its boundaries, senators said, citing average gasoline and home heating oil prices are up more than $1 per gallon from one year ago, or 43% and 48% higher, respectively.

Republicans’ “End the Exodus” plan also proposes requiring the a two-thirds majority in the state Legislature to enact a tax increase and repealing unfunded mandates that have contributed to higher property taxes.

“New York residents and businesses have long been burdened by high taxes and excessive regulations,” said state Sen. Patrick Gallivan, R-Elma, in a statement issued afterward. “The devastating impact of the pandemic coupled with the highest inflation in 40 years has made the situation even worse. It is no wonder that more than 300,000 residents have left the state over the past year. We need to do more to make New York more affordable and to expand our economy.”

“I hear from so many fed up and frustrated constituents planning to leave New York because of our crushing cost of living,” said Sen. Daphne Jordan, R-Halfmoon. “... The already high cost of living is hurting our families. New Yorkers know the truth — we need a new direction.”

The GOP plan also includes several measures aimed to reduce New York’s cost of living, by allowing local governments to have holidays from state sales tax on essential consumer goods, expanding the Empire State Child Tax and Dependent Care Credit and increasing support for employer-provided childhood education and care to reduce the cost of childcare and commit $300 million in relief for energy taxes by eliminating the 2% gross receipt tax and 18A energy assessment charge on utilities.

“When you find yourself in a hole and you want to get out the first thing you do is set the shovel down,” said Sen. Dan Stec, R-Queensbury. “The state budget went from $170 billion to $212 billion in two years; $212 billion is more than Texas and Florida’s budgets combined, and both of those states have larger populations than New York.”

The Senate GOP will push its cost-saving measures with colleagues during the series of legislative budget hearings that will continue through mid-February — an uphill battle with 20 members, and a Democratic supermajority in both chambers.

Democrats in the Senate majority did not return a request for comment.

No limit existed on the deduction before the 2017 Tax Cuts and Jobs Act signed into law by President Donald Trump. The law limited taxpayers to deduct up to $10,000 in property, sales or income taxes paid to state governments and localities from their federal tax bill.

Stec argued Monday the deduction cap only impacts the ultra-wealthy, and not the majority of middle-class New Yorkers.

“People and businesses are really struggling, but this is a common-sense plan that could provide immediate help,” said Byrnes, who is also a sponsor of the legislation. “This is the kind of proposal that people need, and it should be included in the state budget this year so we can provide some relief on the daily essentials people and the economy need to keep moving forward.”

Hawley said inflation is “erasing the impact of wages increases as people find their paychecks buying less and less every week.”

Hawley said the legislation “would have a direct and immediate impact on the economic well-being of New Yorkers and restore the power of their hard-earned paychecks.”

Includes reporting by Matt Surtel and Ben Beagle of The Daily News of Batavia.