Sign Up
Log In
Purchase a Subscription
You have permission to edit this article.
Edit
Home
COVID-19: Back open for business
News
Sports
Obituaries
Opinion
Arts & Life
Calendar
Photo and Video
Ads
eEdition
More
Share This
1 of 12 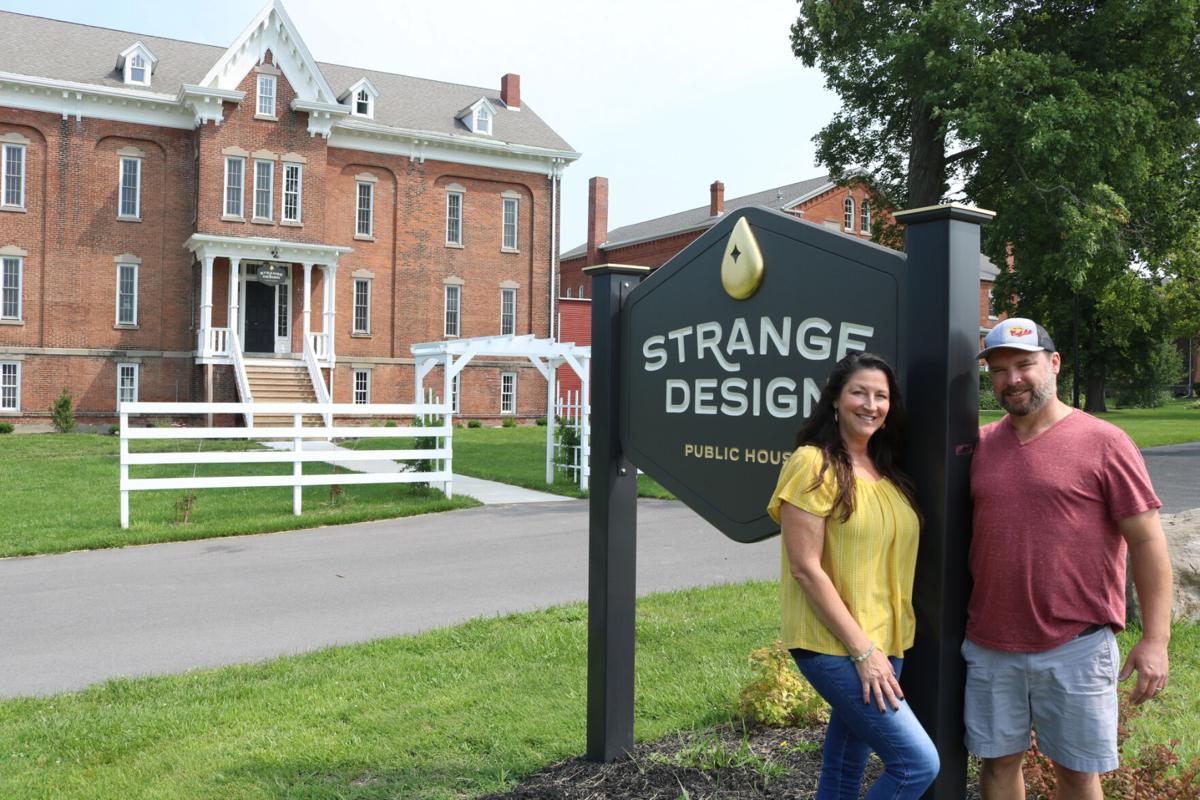 A dream, realized. Kristi and Tommy Streamer pose for a photo outside the Strange Design Public House, their new brewery at 4570 Millennium Drive in Geneseo that’s slated to open later this month. 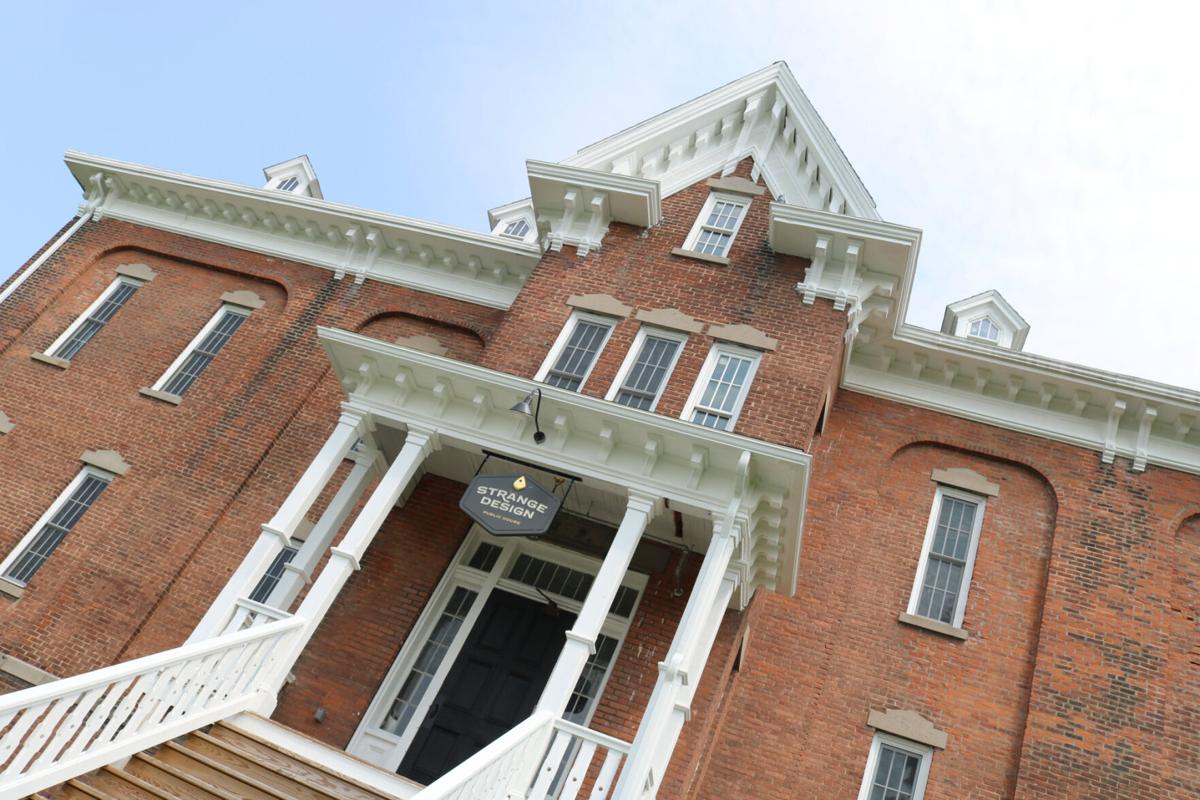 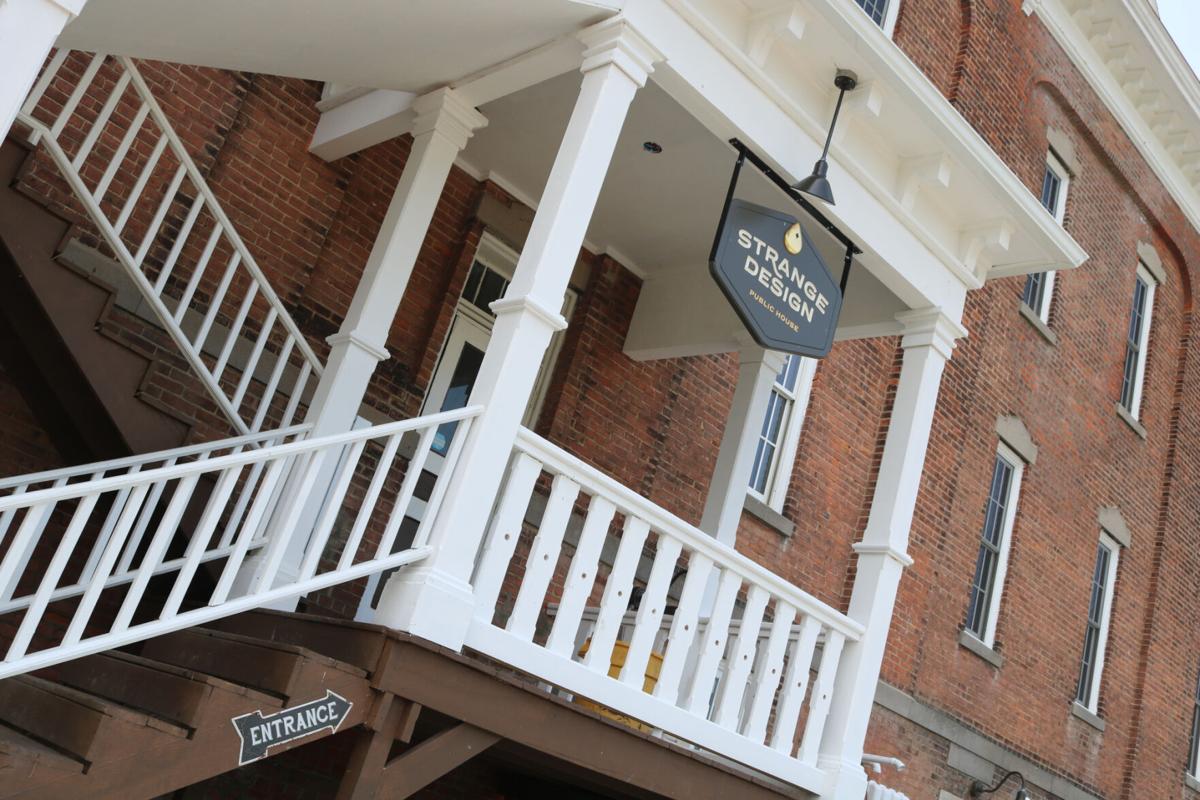 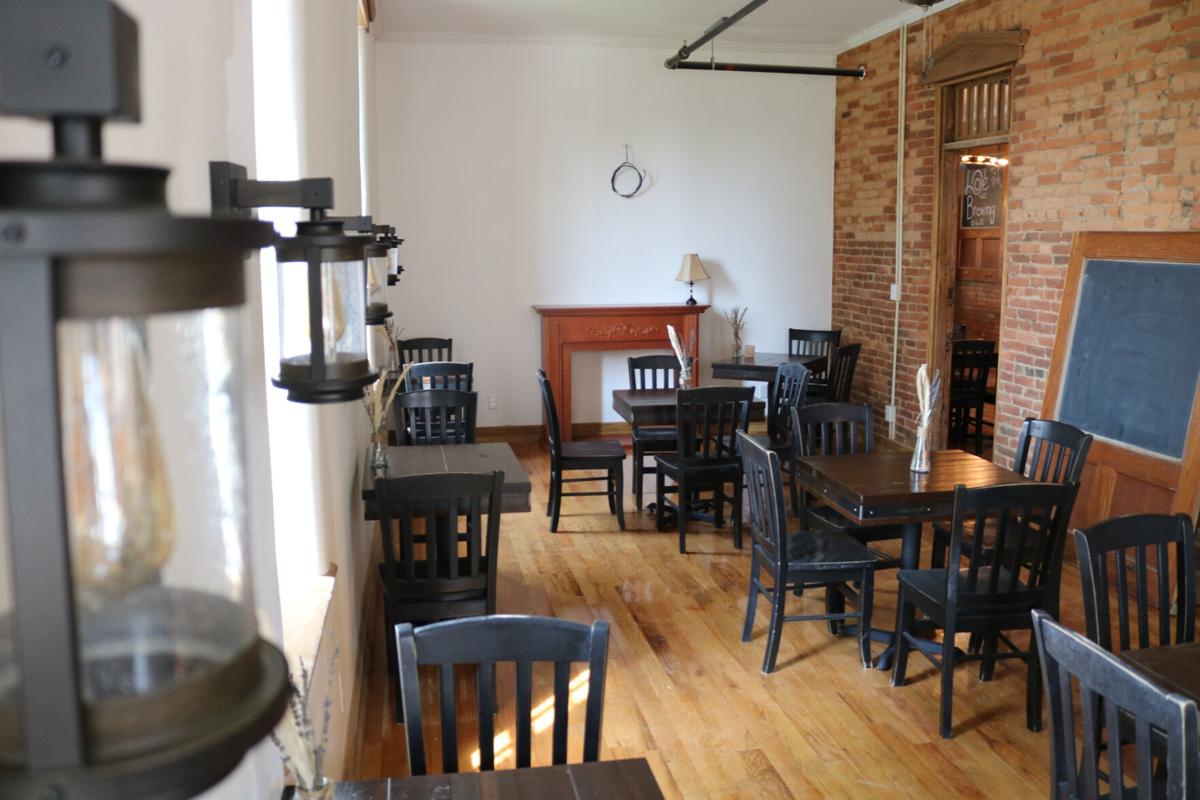 Matt Leader/Livingston County News Dining room. Also on the brewery’s main floor is a dedicated dining room where customers will be able to try dishes from Executive Chef Josh Hurlburt, who says his menu will focus on creativity and fun. 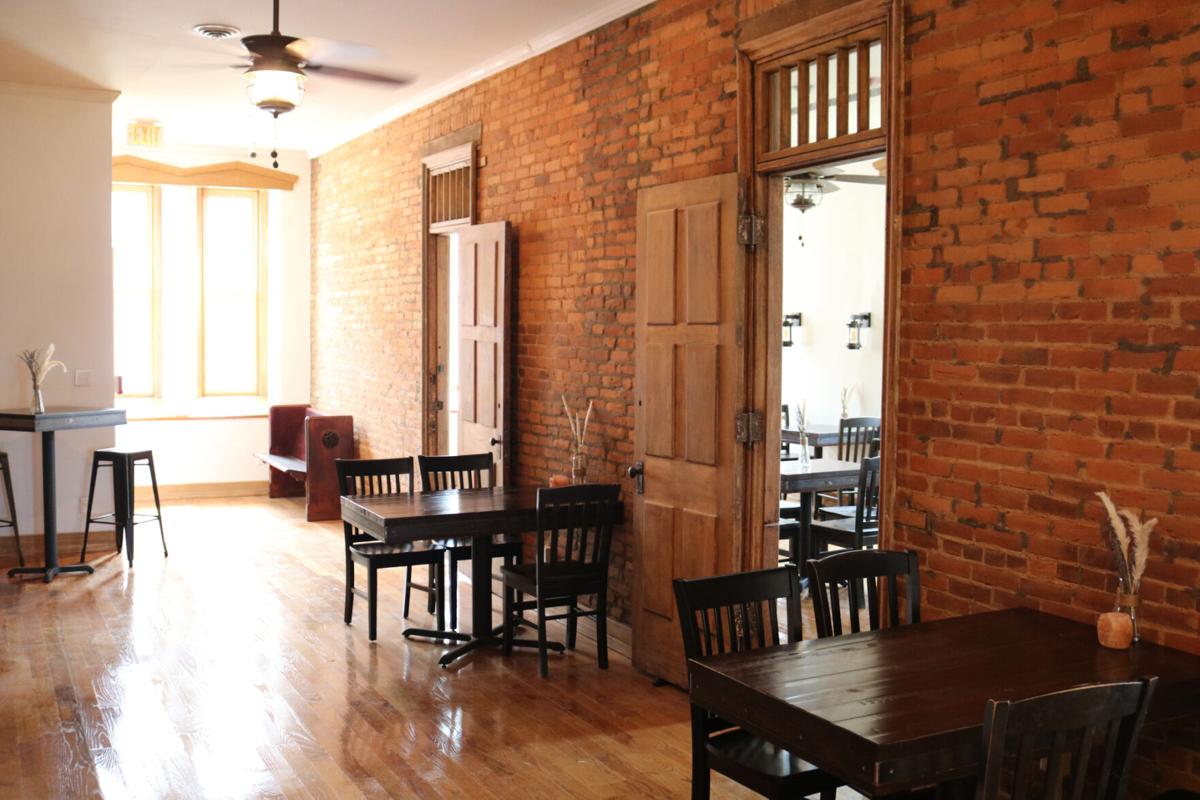 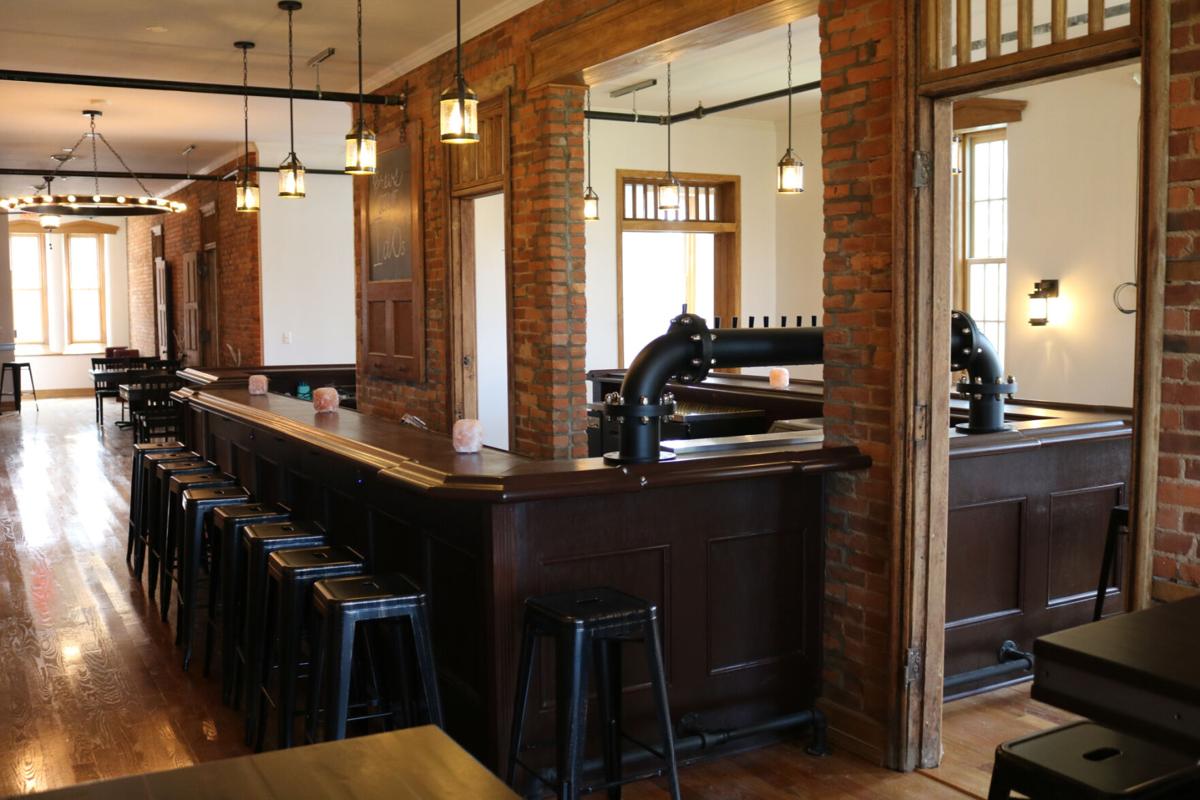 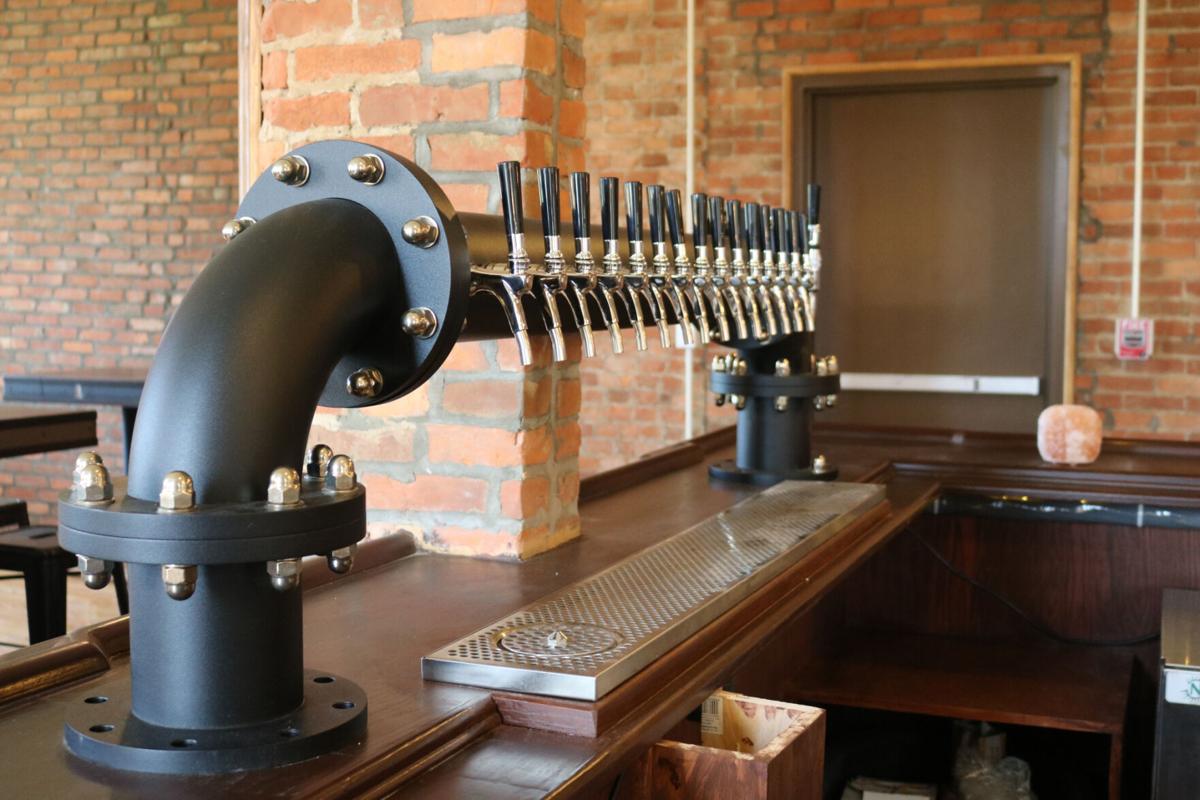 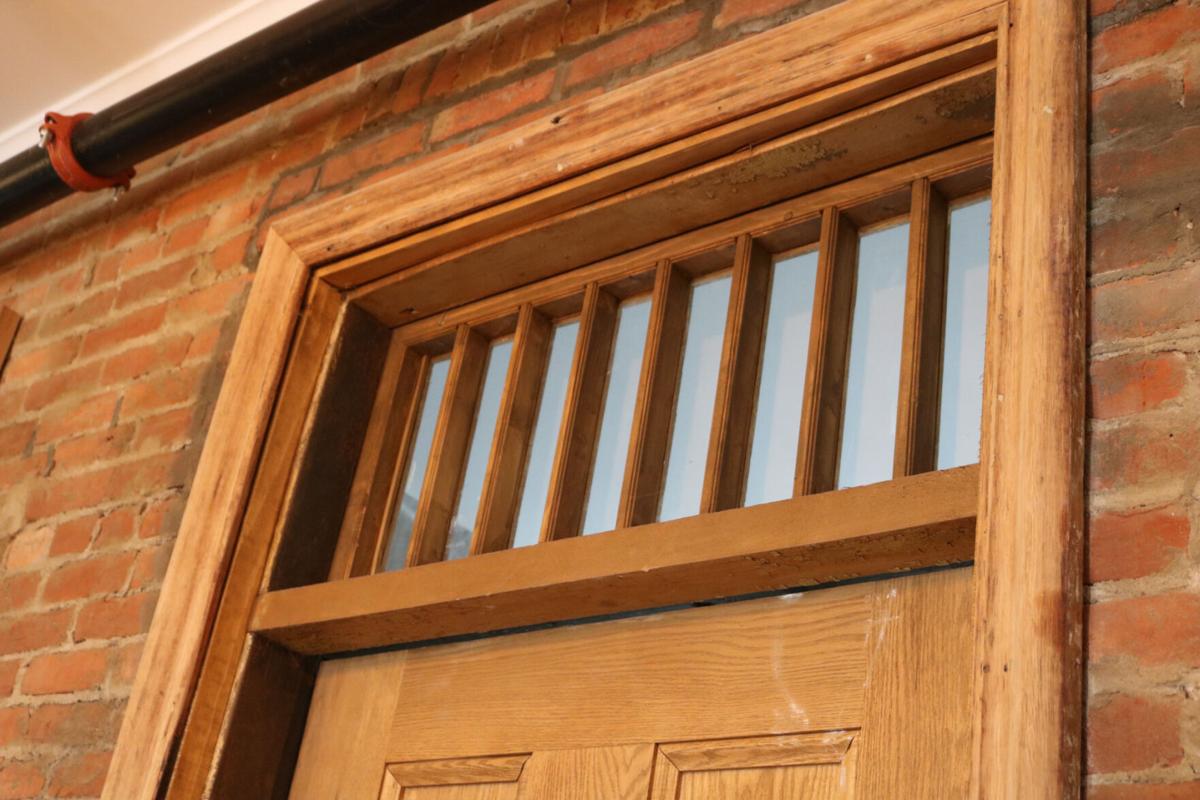 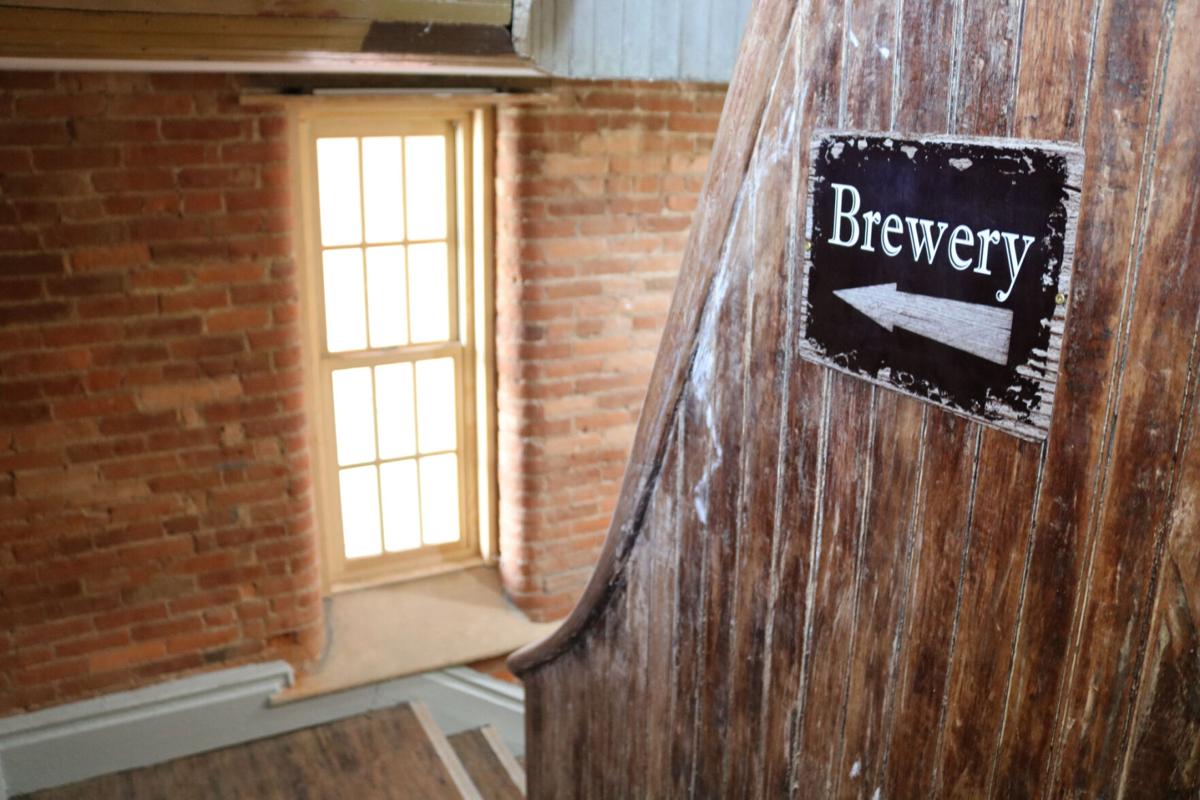 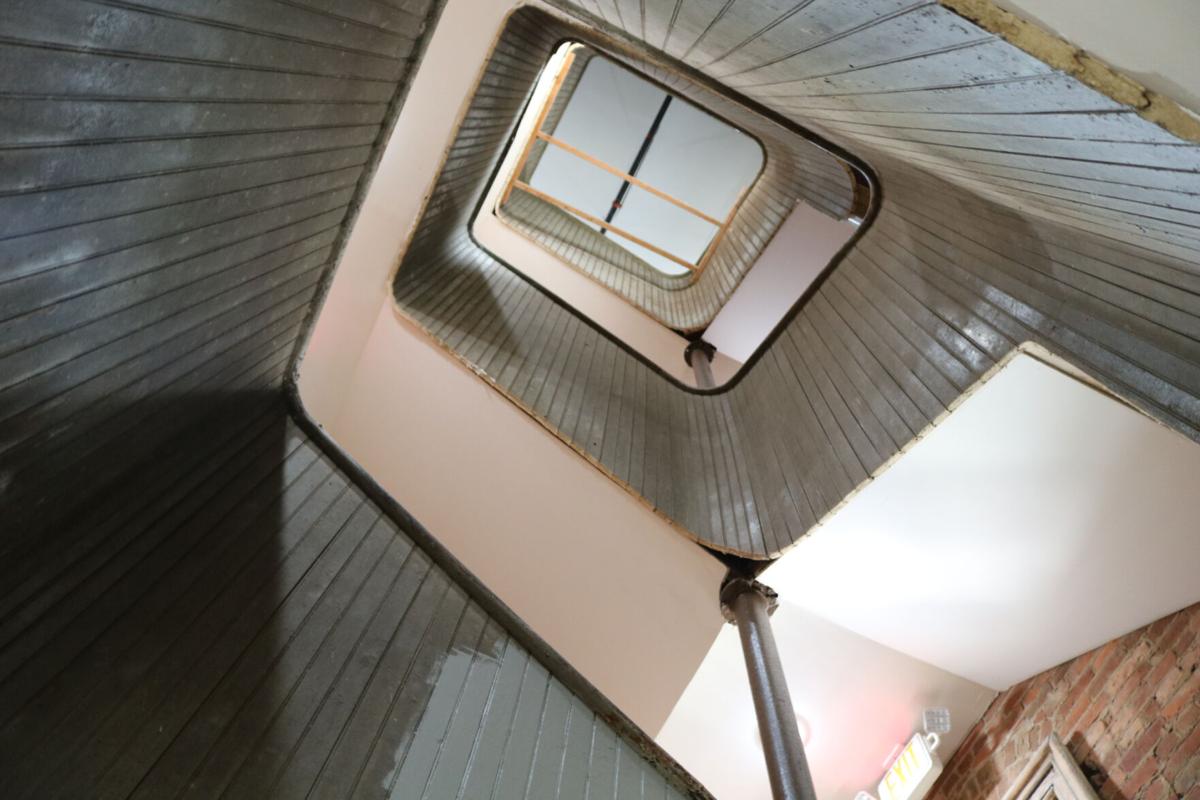 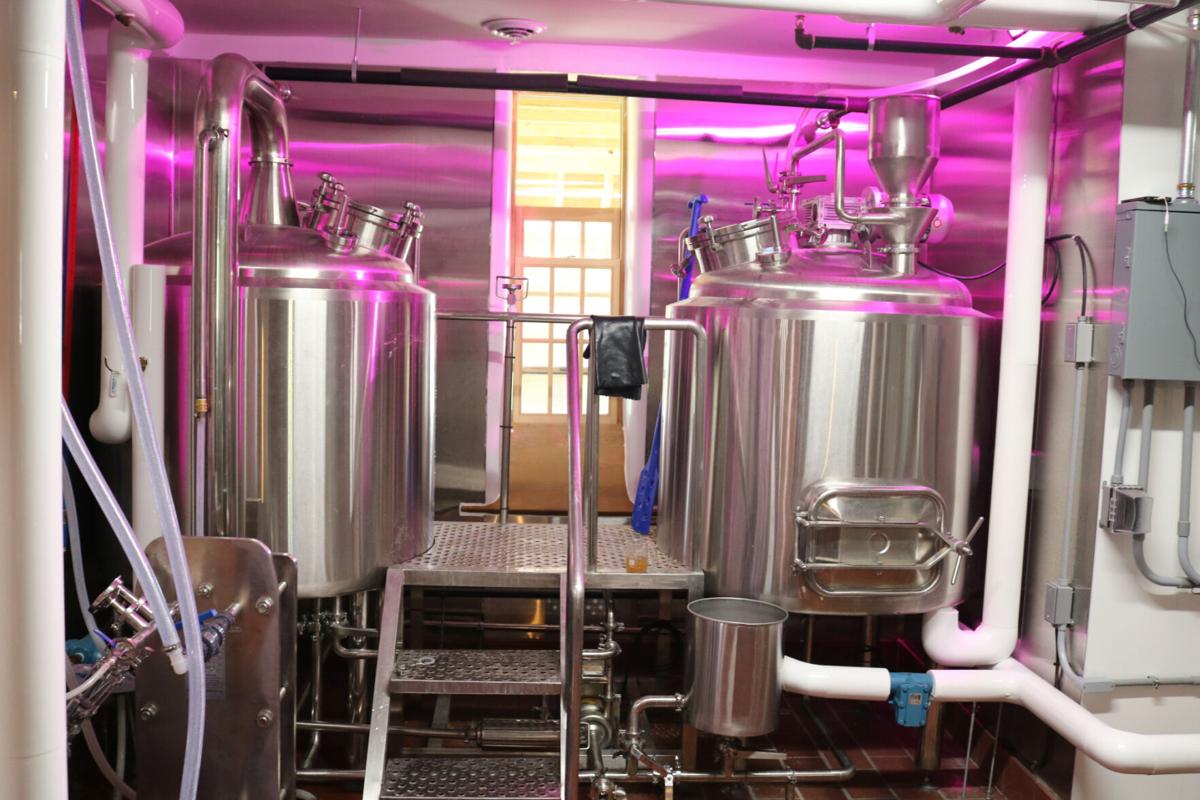 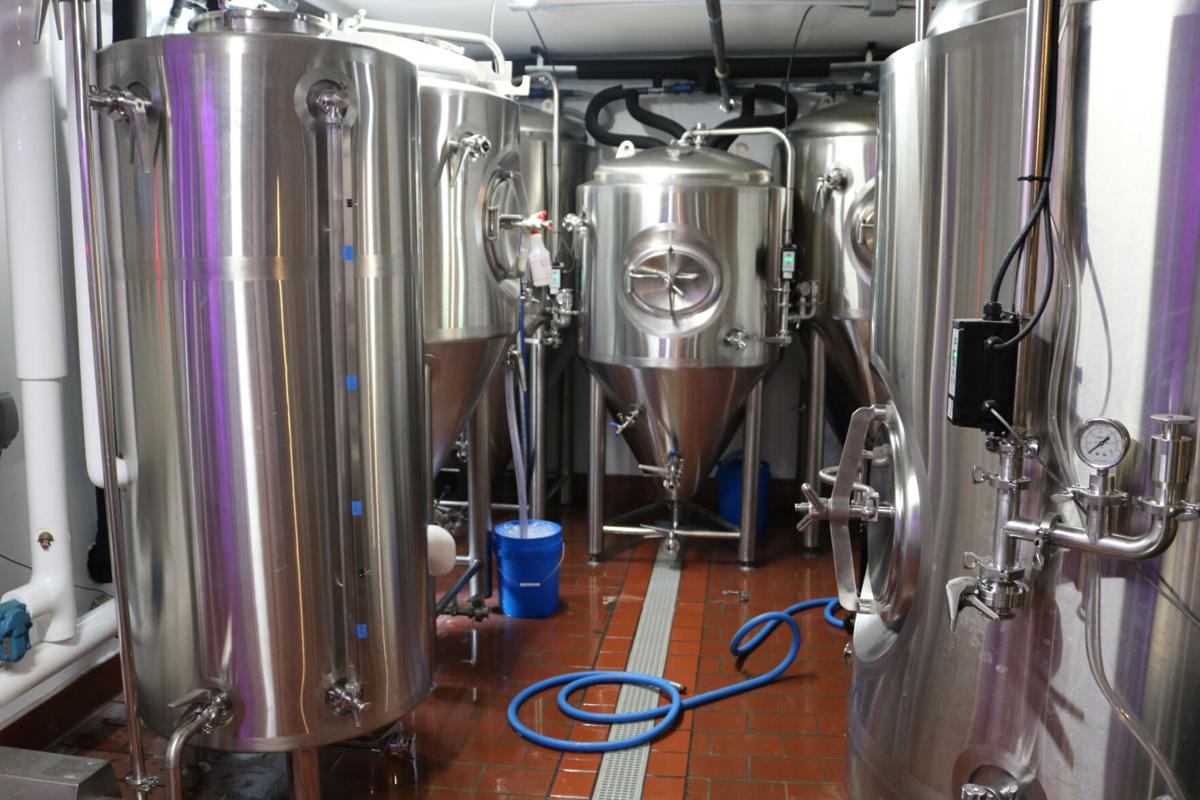 A dream, realized. Kristi and Tommy Streamer pose for a photo outside the Strange Design Public House, their new brewery at 4570 Millennium Drive in Geneseo that’s slated to open later this month.

Matt Leader/Livingston County News Dining room. Also on the brewery’s main floor is a dedicated dining room where customers will be able to try dishes from Executive Chef Josh Hurlburt, who says his menu will focus on creativity and fun.

Located in the three-story, brick building at 4570 Millennium Drive, Tommy and Kristi Streamer said their new craft brewery will mark an about face from the space’s past life as a men’s dormitory in the Livingston County Poorhouse complex.

“I want people to feel like we’re welcoming them into our home,” said Kristi Streamer, speaking inside her and her husband’s new brewery last month. “I want it to be relaxing and while I hope to be very, very busy, I don’t want it to be frantic… That’s our big thing - we want everyone to feel welcome, whether you love craft beer or not.”

The building has been lovingly restored by building owner Greg O’Connell’s work crew. O’Connell is a the New York City real estate developer best known locally for his efforts to revitalize Mount Morris’s downtown district by buying and restoring neglected properties and then renting them out at affordable rates.

Exposed brick is much in evidence throughout the brewery and the Streamers said O’Connell took pains to preserve many of the building’s original details and features – including some of the interior doors and the transom windows above them.

Despite the renovation, the layout of the brewery’s main floor still bears a close resemblance to what it would have looked like when it housed the poor and destitute in the 1800 and 1900s.

A custom bar with 16 taps serves as the central feature of the space and was built to encompass a portion of an interior brick wall original to the building. The Streamers have taken full advantage of the layout’s strange design in creating pockets of seating clustered around the bar.

Strange Design features a five-barrel brewing setup in the basement – a five-fold increase over the one-barrel system the couple uses at Amber Lantern. The brewery also boasts a 10-barrel fermenter system “so that on our more popular brews, we can double batch and do 10 barrels,” explained Tommy Streamer.

And while customers will still be able to purchase the varieties like the Old Amber Ale that Amber Lantern is best-known for, Tommy Streamer said the new setup will allow him and Head Brewer Ben Bernard to try out new beer varieties and styles.

“I think we’re going to have a little freedom and a little fun too that we haven’t had the opportunity to have over there (at Amber Lantern) because the system’s so small,” he said.

Elsewhere on the main floor is a dedicated dining room, where patrons can take advantage of the brewery’s full kitchen executive chef Josh Hurlburt will use to serve up dishes that encapsulate his mantra of “something similar, but different.”

Hurlburt comes to Strange Design most recently from the 41 Lakefront Hotel – formerly the Ramada Geneva Lakefront. He previously served as executive chef at Trio in Rochester and, before that, worked for about 10 years at the Inn on the Lake, now The Lake House, in Canandaigua.

Customers should expect an eclectic menu that will change with the seasons to take advantage of local ingredients. There will also be a focus on creativity and fun, said Hurlburt.

“It’s a brewery. You should be coming here, having a fun time – not worrying about what you’re eating,” he said. “Just having something you can’t have somewhere else and something you’re really going to enjoy.”

Hurlburt is still making final cuts to his menu – a process he acknowledged is “always the toughest part” for him.

“I’ve had ideas before that’ve been on the chopping block and they make it and then they end up being some of your best-loved dishes,” he said. “For me, it’s always kind of this painful process of like, which child do I hate the most? Then it’s always the one who barely makes it is the one who impresses you.”

Whatever else makes the final version of the menu, Hurlburt said it’s a safe bet a few burgers and his chicken sandwich will be among them.

“Chicken sandwich is gonna sell amazing,” he said. “Once the chicken sandwich craze started happening, that’s something I’ve researched for awhile and tried different things and found something that’s really good and people really seem to come back for.”

Once the brewery is up and running, the Streamers also plan to offer a Sunday brunch.

The couple had considered the idea of working “Pour House” into the brewery’s name - a play on its past use as part of the county poorhouse complex – but ultimately decided against it.

“I was like ‘Eh, I just feel like that’s kind of disrespectful.’ It made me uncomfortable,” recalled Kristi Streamer. “So once we decided it would be a public house, we were like ‘Well that’s kind of cool, OK.’ And then one day I just came home and Tommy said ‘I have it – it’s Strange Design.’ I’m like ‘Oh – it fits everything.’”

In addition to meshing well with the brewery’s unique physical layout, “Strange Design” is also the Phish song that played during the couple’s wedding, when Kristi was walking down the aisle.

“It’s important to us,” she said of the song. “It talks about life is strange and having your friends with you is important, so that was great for us.”

When Strange Design finally opens to the public, it will mark the culmination a journey that began in earnest nearly five years ago, when the Streamers first approached O’Connell about the idea of putting a brewery in one of his buildings on Millennium Drive. O’Connell also owns the two buildings to the east of the brewery that house the Oak Valley Inn and Expressions Salon and Spa.

“We knew we wanted to be in Geneseo - we’ve talked about that forever,” said Kristi who, along with Tommy, has extensive family connections to the area. “We just feel comfortable here and connected. I love Geneseo. I’ve loved it forever.”

Added Tommy: “It was Geneseo or bust pretty much. We weren’t going to go anywhere else.”

After contacting O’Connell to see if he had any concrete plans for the building, the Streamers were able to do a walk-through to see whether turning it into a brewery was even within the realm of possibility.

“We came in and we walked around and Tommy took pictures and we kept thinking ‘What could we do? Could this be done? How would we do it? What would need to happen?’” Kristi recalled. “And then we met with Greg and walked him through it – we’re like ‘This is what we see.’”

The building looked a bit different back then, recalled Tommy.

And it’s no wonder. According to Amie Alden, the Livingston County Historian, the structure hasn’t seen regular use since the 1960s, when the county’s welfare department used it for office space.

Around the time the Streamers aspirations of opening a brewery in Geneseo were coming into sharper focus, Livingston County launched Brew IN Livingston, an economic development program intended to kick-start the count’s craft beverage industry by offering financial incentives to those wishing to start breweries or cideries.

The Streamers were among seven winners announced in 2017, but it took until March 2020 for the couple to lock up the building and secure the financing needed to move forward with the project.

The pandemic complicated the project as well as operations at the Streamers’ other business, Amber Lantern in Warsaw, where the couple was forced to layoff all but two employees for several months.

“Part of our original business plan was being able to run that and keeping that going was going to help us fund some things for this,” said Kristi. “That’s how you do it - you have one business, you open another.”

While the pandemic delayed the project, work did progress, albeit slowly. And while the past year-and-a-half have certainly been stressful, looking back, the Streamers feel like things actually worked out for the best.

“Now that we look back on it, I’m kind of – we didn’t just open and have to shut down,” said Kristi. “I feel like it somehow, maybe, has worked in our favor.”

There’s still a few things to wrap up over at the brewery. The point-of-sale system needs to be installed, some walls need to be touched up with paint, some drywall needs to be patched.

But those final touches should be done soon and the Streamers said they’ll be selling to-go crowlers out of the space “as soon as possible.” They still need to hire and train staff before rolling out their food menu, though.

Kristi said they’ll probably do some soft openings in September before holding a grand opening – hopefully some time in October.

“We’re hoping to be open to the public on September 8,” she said. “We have kegged two beers and are hoping to have four when we open. We’ll also have Deer Run wines and Black Button Distilling spirits available.”

In the future, they’d like to create some outdoor space for their customers - “We’re gonna have a tent, picnic tables, some Adirondacks, a fire pit,” said Tommy. Some picnic tables and Adirondack chairs were already set up outside the brewery last week and a fire pit to the immediate west of the brewery looked just about finished.

The couple may also look to partner with nearby businesses for special events and weddings at some point down the road.

“There’s Expressions Salon, and you have the B&B and you have this space, outdoor space – there’s so much we could do,” said Kristi. “We are going to get to that, just now we’re just like ‘Let’s get open.’ Beer first, restaurant, then events.”

They want people to know they’re excited to bring Geneseo a hometown brewery it can be proud of.

“It’s not just a money making thing for us,” said Kristi. “It’s really about the things that we’re passionate about and care about and love to do.”