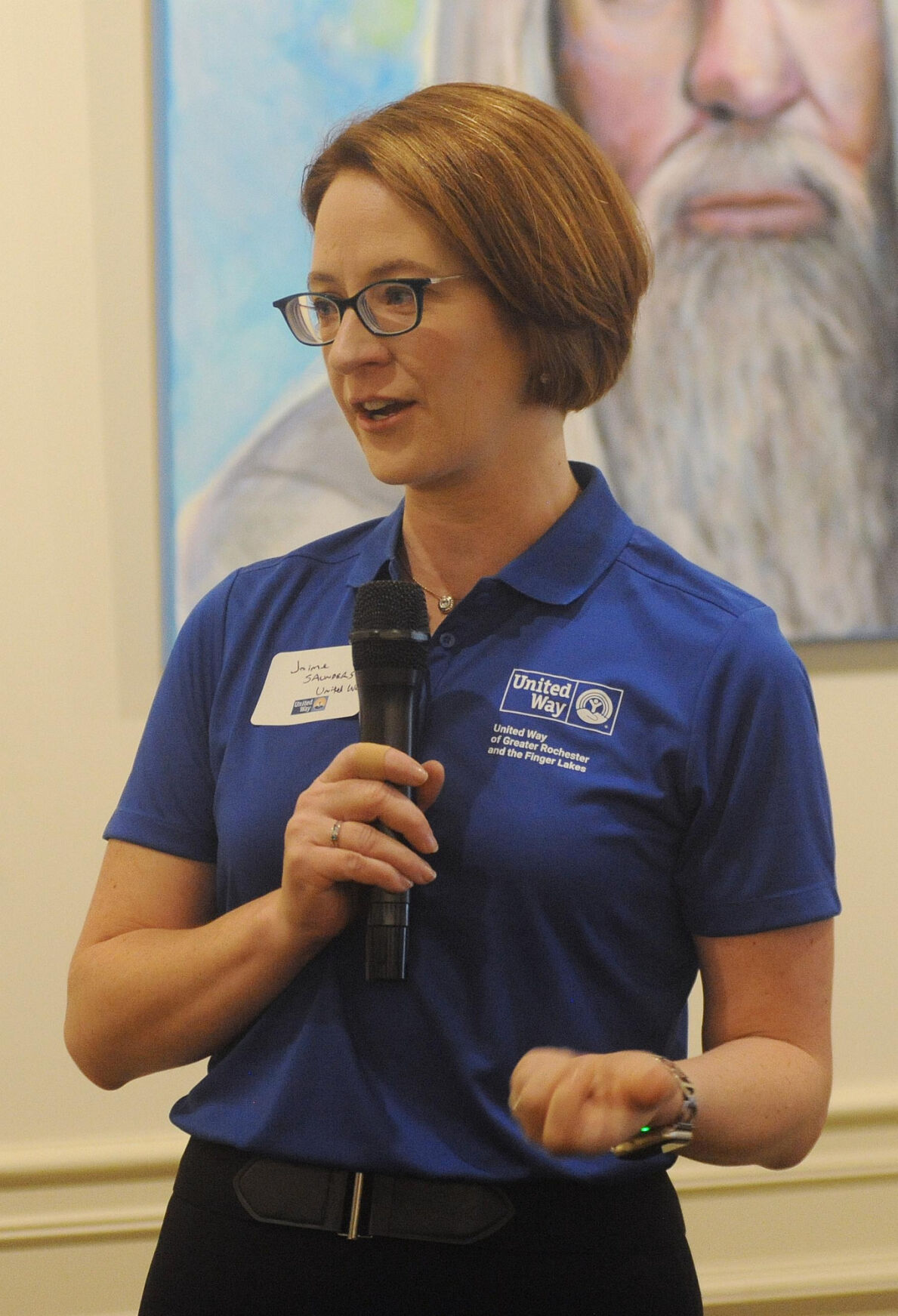 Mark Gutman/Daily NewsJaime Saunders, president and CEO of Greater Rochester and the Finger Lakes, gives an update Wednesday at GO ART! in Batavia. 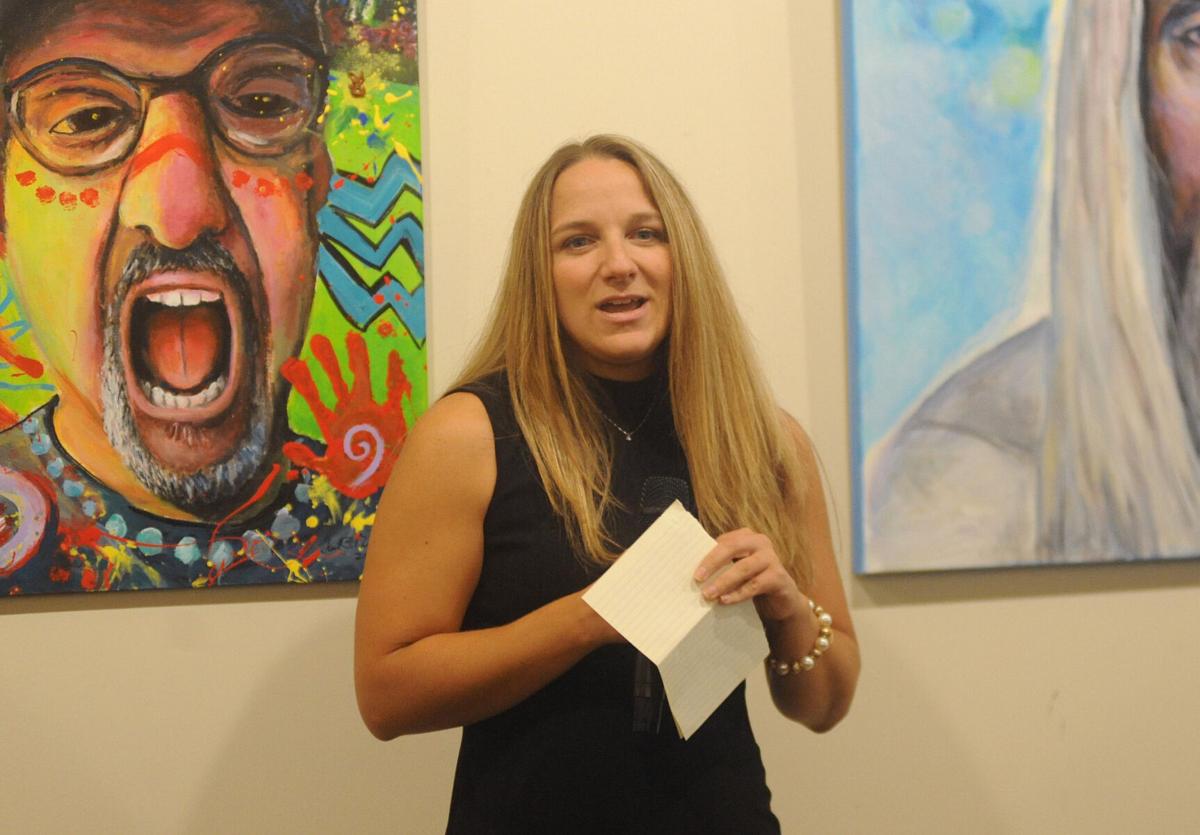 Mark Gutman/Daily NewsMelissa Stein, former United Way of Genesee County board president, said the board has been involved in the merger decisions. 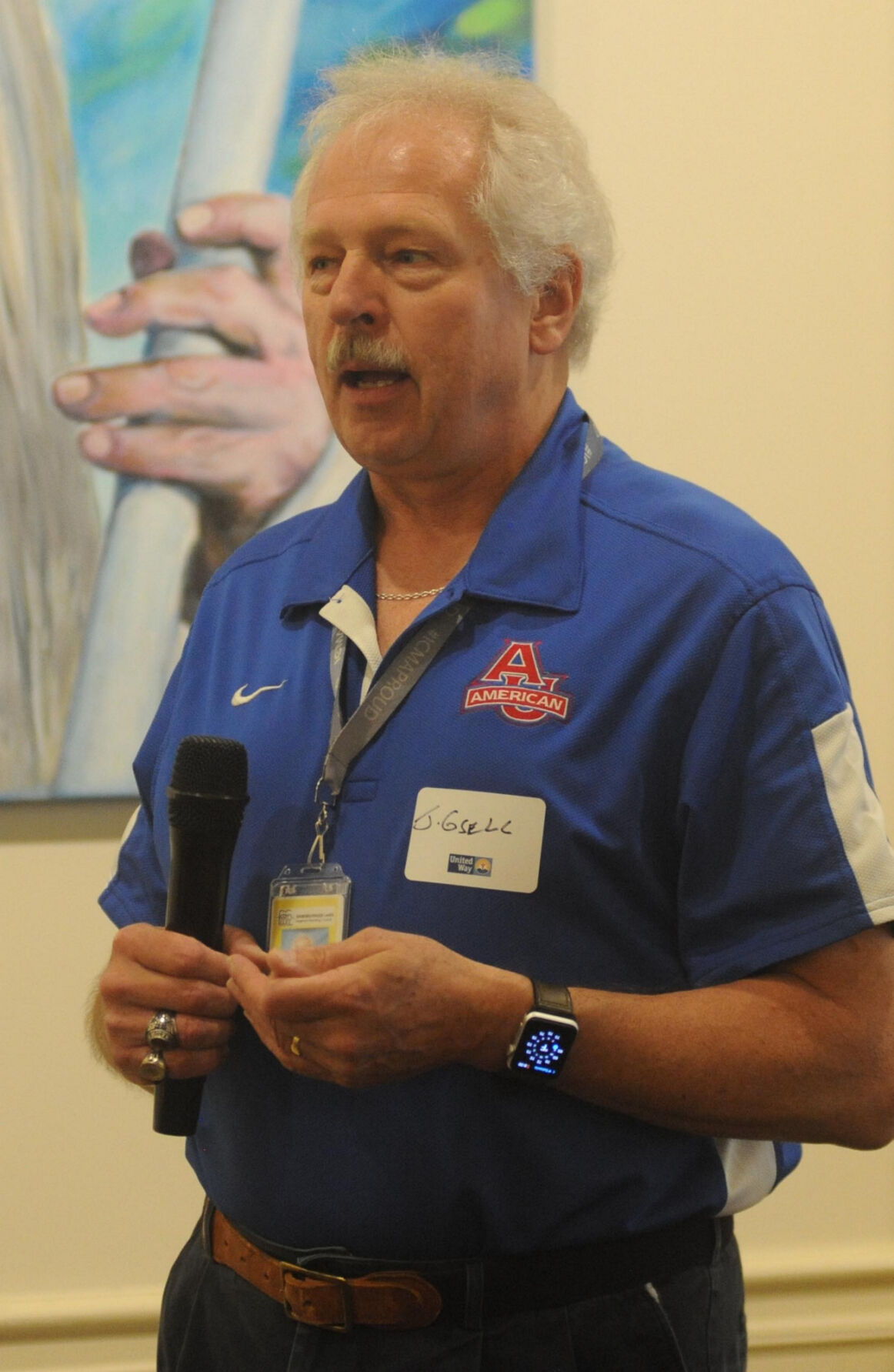 Mark Gutman/Daily NewsJay Gsell, one of the people in a regional group that put the merger together, said the United Way will get stronger because of the merger.

Mark Gutman/Daily NewsJaime Saunders, president and CEO of Greater Rochester and the Finger Lakes, gives an update Wednesday at GO ART! in Batavia.

Mark Gutman/Daily NewsMelissa Stein, former United Way of Genesee County board president, said the board has been involved in the merger decisions.

Mark Gutman/Daily NewsJay Gsell, one of the people in a regional group that put the merger together, said the United Way will get stronger because of the merger.

BATAVIA — Bringing together six local United Way locations as the United Way of Greater Rochester and the Finger Lakes will mean more investment in the GLOW region — Genesee, Livingston, Orleans and Wyoming counties.

Jaime Saunders, president and CEO of the United Way of Greater Rochester and the Finger Lakes, said Wednesday in Batavia that the merger will benefit the GLOW region through a local presence. The United Way held a presentation in Geneseo that afternoon.

“As a regional United Way, it provides more choice and more options. Many of us live and work and play in different counties, and now you’ll have the opportunity to give where you live, give where you work, do both, and to really invest in organizations and issues that are meaningful to you,” she said.

Saunders said she gets a lot of questions about what the merger means.

“We’ve gone through a lot of changes in the last 16 months — in our businesses, personally, in our businesses, and as a community, as a country, a globe. Really, a lot will not change. How do we make sure our communities have the opportunity for everyone to thrive?” she said. “That’s what this is about. That happens by knowing what unique needs you have here. That happens, as we learn, across the region of areas that we can come together in big, bold, different ways.”

THE UNITED WAY HAS a Project Uplift grant of $125,000, which includes $25,000 for Genesee County, Saunders said the grant is an innovative approach to empower people in need to identify their needs.

“Our partnership with the Salvation Army, when they have a client that is receiving services and they can’t get to work because they can’t afford a car repair, they will have resources to tap into,” she said. “With all of the eviction moratoriums that are ending in August, we know that there are public dollars available, but there’s not a moving van, if that unfortunate circumstance happens or a deposit for a new apartment, so there’s flexibility in those dollars.”

The United Way has gotten back to funding at pre-pandemic levels. For Genesee County, that level is about $180,000 for 23 human service agencies. Funding in Orleans, Wyoming and Livingston counties ranges from about $100,000 to $1 million or $1.2 million.

“We did not know we’d get there, but we were able to announce on Monday that our agencies were able to be fully funded, which is just amazing and a real tribute and testament to the people in this room,” she said. “It’s really across the region. Collectively, the six United Ways are over $30 million in investment,” she said. “The bulk of that, currently, is in Monroe County and that’s why we’re so excited to come and support throughout the region, because the growth potential is significant.”

THE UNITED WAY WILL have more of a presence in the community.

“Now, there’s a team of over 100 United Way team members for the region. We are one of the most efficiently-run organizations across the country, but we are locally focused. Our six United Ways are a local, independent organization,” Saunders said.

“We will have regional cabinets that will help to make sure we have an eastern, western and central cabinet. There are seats for volunteers who can make sure we stay informed,” she said. “We know the trends, we know the connections and we know the needs.”

Saunders said that can also be taken to a regional council that can look across the six counties and they can work together to make that happen.

“When that happened in a few of our counties, we have been operating as a region. You may have seen some of our team members that have been doing that,” she said.

Melissa Stein, who was president of the Board of Directors for the United Way of Genesee County, thanked those who were there Wednesday and also put in countless hours to make the community better and for their support of the United Way.

“At a time when the needs of our community are exceedingly high, we are continuously working to be more efficient so we can be more effective,” she said. “Our board has been fully involved in the decision-making with regard to the merger over the past two years and are excited to continue having that local presence with the regional support.”

The United Way has been working alongside Rochester with human resources, information technology and fiscal management and personnel needs in past years, Stein said.

Saunders said the United Way reorganizing from a position of strength.

“This is about investing more, providing more opportunities for connection, more volunteer opportunities, more support for those of you running workplace campaigns, more support for those we set out to help and change their lives — that’s what this is about,” she said. “As we think back on the last 16 months and two weeks, going through COVID, I know that many of you were out there at the clinics, that you are out there at our non-profit partners ... you really went into overdrive. Our partners in our businesses and our non-profits, and in the public sector, all coming together, united, to help our neighbors. That is how we will re-emerge different and we will re-emerge stronger.”

JAY GSELL HAS BEEN involved with the United Way since 1993 and was one of the people in a regional group that put the merger together.

On what this means locally, Gsell said, “The idea is that the people who are making the contributions in the agencies we support ... this is what has made Genesee County and the United Way the titular organization and collaborator it’s always been before. It’s only going to get better.”