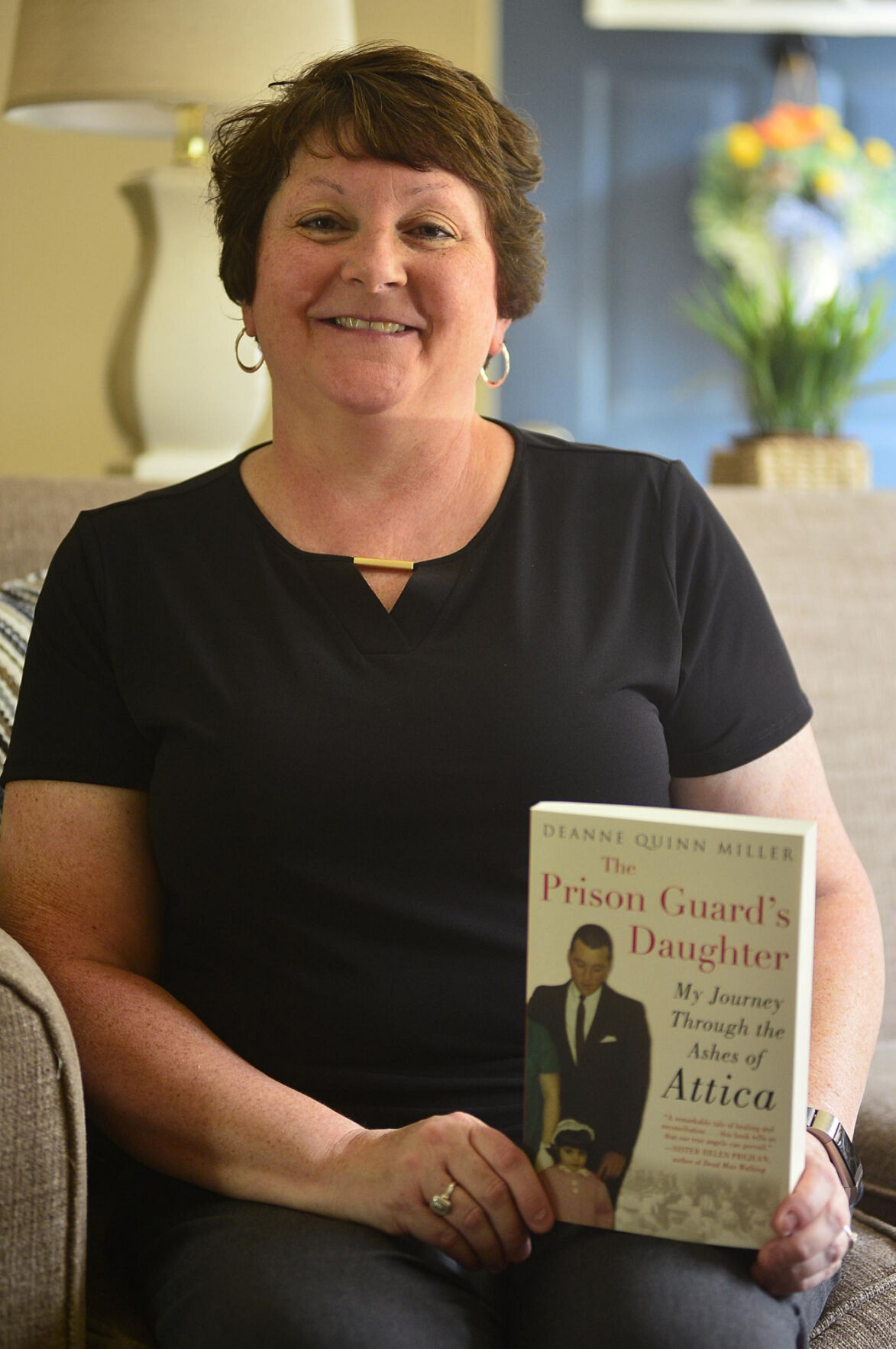 Mark Gutman/Daily NewsDeanne Miller holds a copy of her new book, which came out this week. 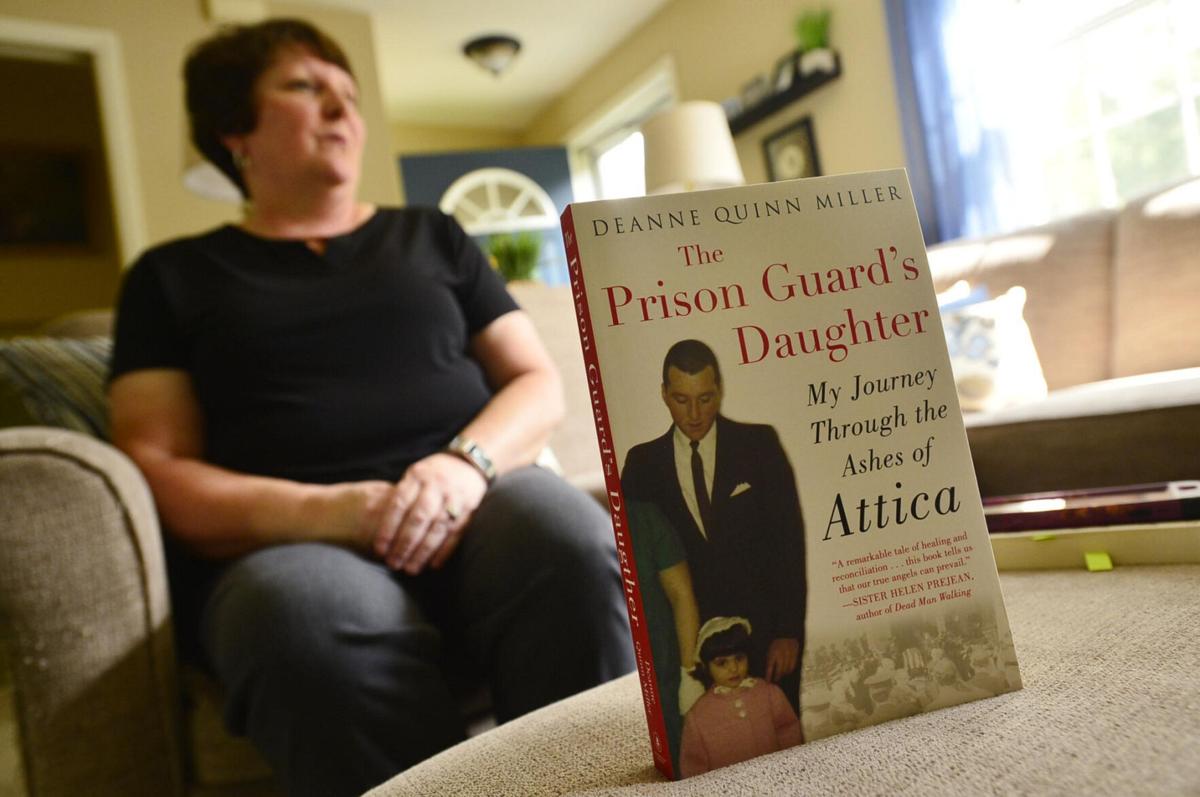 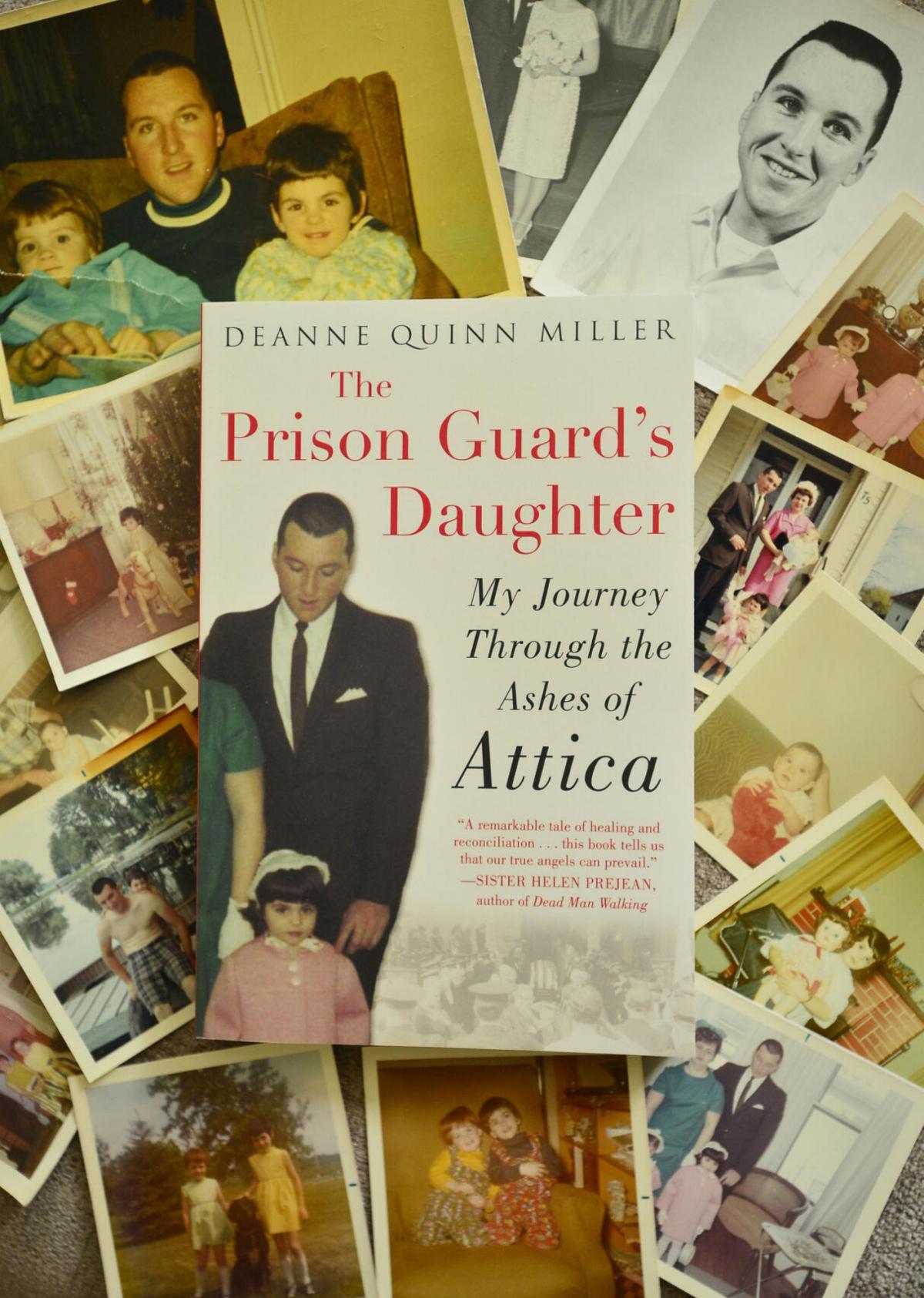 Mark Gutman/Daily NewsSome of the photos that were in Deanne Miller’s new book, seen behind her new book. 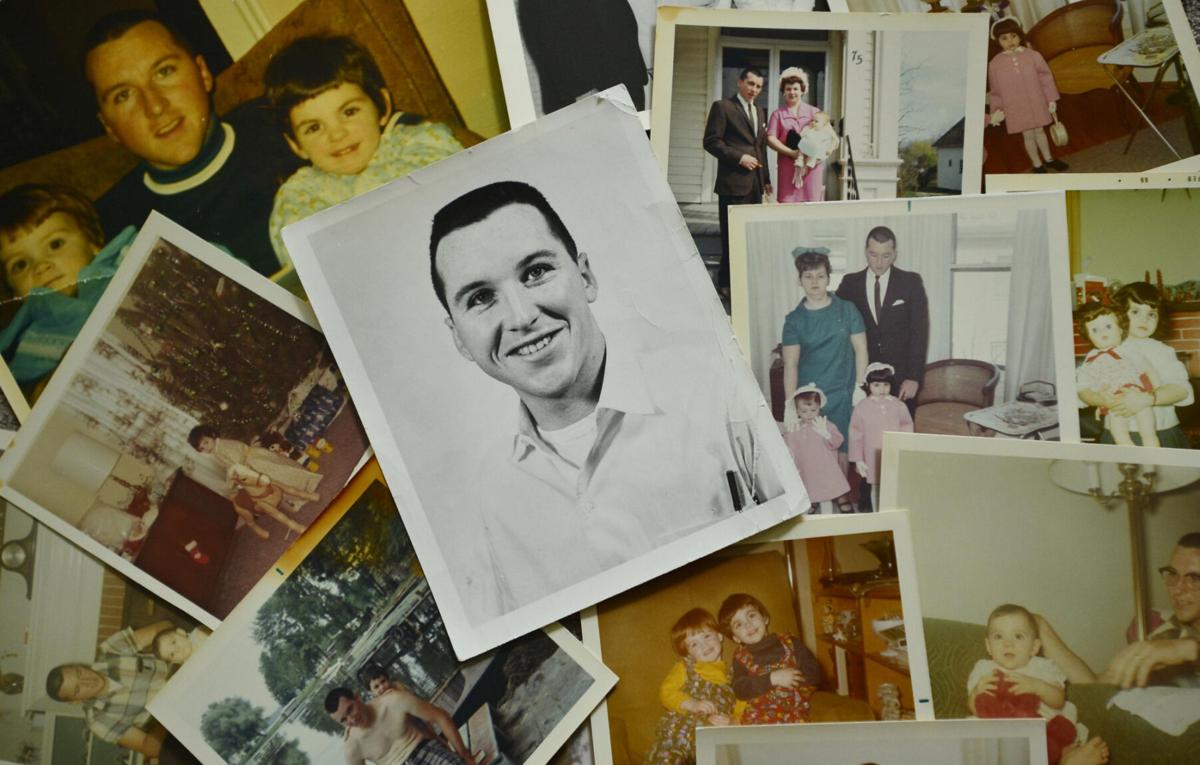 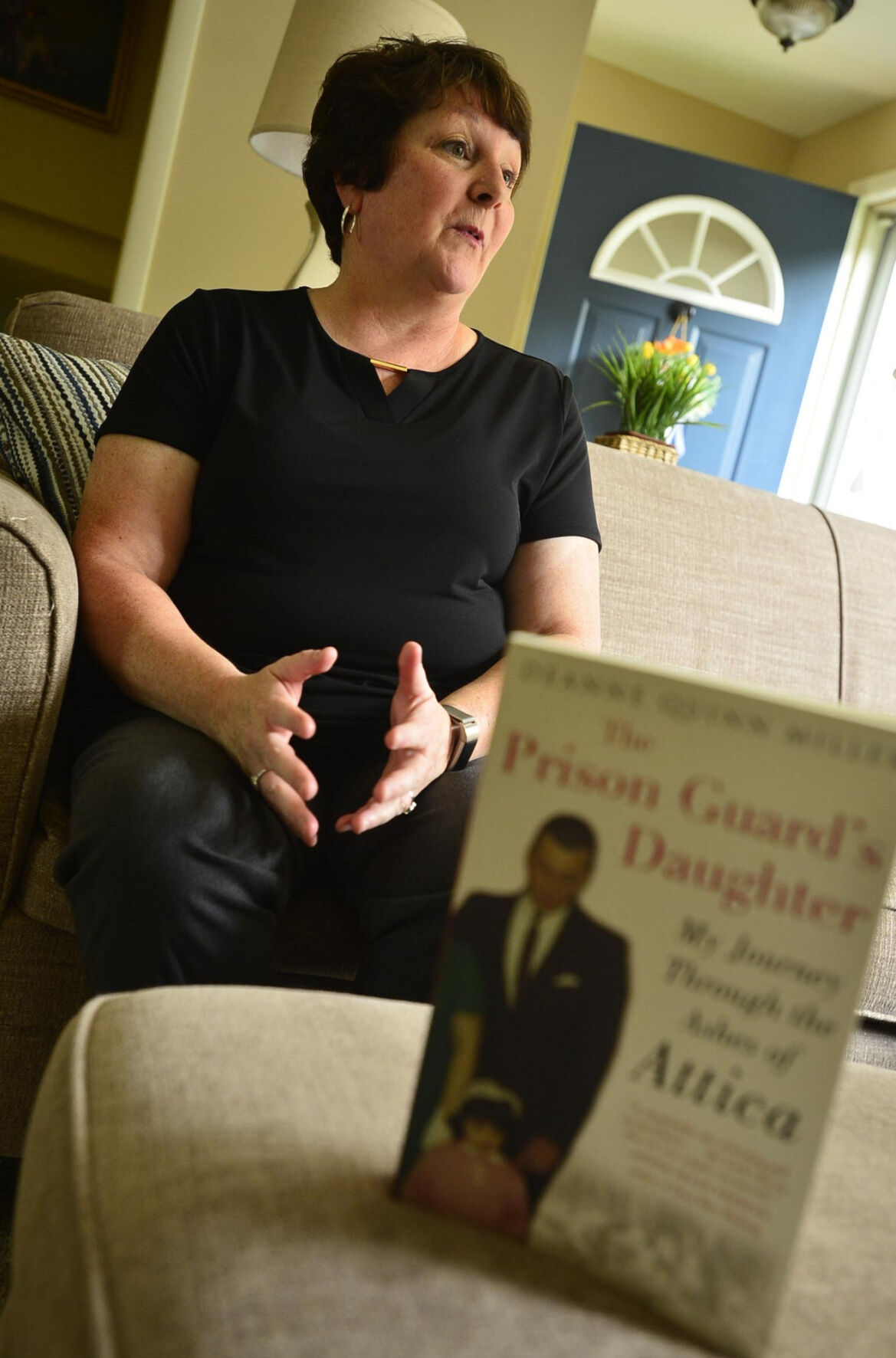 Mark Gutman/Daily NewsDeanne Miller holds a copy of her new book, which came out this week.

Mark Gutman/Daily NewsSome of the photos that were in Deanne Miller’s new book, seen behind her new book.

BATAVIA — It’s been a half-century since Correctional Officer William Quinn died of his injuries in the riot at Attica Correctional Facility.

With the 50th anniversary of the Sept. 9-13, 1971, deadly riot and retaking of the prison, Quinn’s daughter, Deanne Miller of Batavia, has put her thoughts on her life since the riot to paper.

“The Prison Guard’s Daughter: My Journey Through the Ashes of Attica.” the book she wrote with Rochester Democrat & Chronicle journalist Gary Craig, was released Tuesday.

“I felt it was important to write the book now, at the 50th anniversary, because it’s a perspective that I think isn’t out there in the general public,” Miller told The Daily News. “Someone who writes a memoir writes about their life. It’s a very different perspective than the books that are already out there on Attica, which are mostly historical in nature.”

Her father was injured on Sept. 9, 1971, during the initial riot, and died two days later from head injuries.

Miller said this is a very personal book.

“It recounts my life, living in the aftermath of Attica,” she said “I certainly hope people understand, from a different perspective, what it’s like to be a daughter of a correction officer who died.” Miller, who was 5 years old at the time of her father’s death, said corrections officers and all law enforcement do very dangerous jobs. When they go to work, they assume they’re going to come home after their shifts, as the Quinn family did on Sept. 9, 1971.

“Due to the dangers of the job, my father didn’t come home. I certainly hope that never happens to anybody else,” she said.

THE LESSONS OF ATTICA are many, Miller said.

“Attica will forever be a cautionary tale for, I think, everyone — citizens of a town like our citizens of Attica when our little town was turned upside down from the riot,” she said. “I think it’s a cautionary tail for the correction officers that go in every single day.”

Not all the lessons of Attica have been learned, Miller said.

She said she can barely believe that it’s been 50 years since the riot.

“It just seems like I’ve been involved in Attica for such a long time,” she said. “It’s part of my life, it’s part of who I am. To think that 50 years has gone by is pretty amazing, I think.”

The one thing that disappoints her on the 50th anniversary, is the lack of an apology from New York state. Miller said she is part of the Forgotten Victims of Attica, formed in response to the 2000 settlement of the Attica inmates’ class-action lawsuit over their treatment in the aftermath of the riot. New York state paid $8 million, divided among 1,280 inmates or their survivors.

“As the Forgotten Victims of Attica, this group of 50 families, the one thing we did want is an apology. It’s the thing that still is out there,” she said.

“It would make the state employees’ families, I think, have a feeling more of, maybe, wholeness,” she said. “I am hopeful that the 50th anniversary would be a great time for our new governor to come out and issue an apology.”

MILLER SAID THERE WAS originally a timeline of 5 1/2 weeks for her and Craig to co-write the book.

“It was in the middle of a COVID lockdown, so myself and Gary Craig, who’s my co-author, were like, ‘I think we can do that,’” she said. “The book itself is 288 pages, but I think I probably could have written a thousand because there’s just so much about Attica. We just kind of had to pick the highlights, because we had such a short timeline. We were given another two weeks for editing and so on, and some additions.”

Miller said Craig is an amazing writer. She would write her feelings for each chapter and he would edit them.

“I would just sit down and write it all out,” she remembered, adding that they would decide what to keep in the book and what to leave out. Miller said she wanted the book to be personal, but not “all-telling.” She and Craig would communicate via email and also by phone.

“This was COVID time, so we couldn’t be together. We would jump on the phone and talk about how we would flush things out,” she said. “It was a back-and-forth.”

“I had intentions of writing something that I could leave behind for my children and my children’s children, so they would know who their grandfather was,” Miller said.

The co-author said she’s very proud of the book, which has gotten some feedback.

“All day long, I got emails and texts about people who had gotten the book. A friend of mine from high school said ‘I couldn’t put it down. I read it in the first couple of hours of getting it,’ and she said how fabulous it was,” Miller said. “I’m getting good feedback, which makes me feel really good.”

MILLER SAID HER EXPERIENCE isn’t something she can talk about with just anybody.

“To be able to have other people that suffered similarly, it was nice to have. The information that many of them shared with me about my dad was really comforting, for the most part,” she said.

“The Prison Guard’s Daughter: My Journey Through the Ashes of Attica” may be bought online at barnesandnoble.com for $17.99 (paperback) and amazon.com for $12.79 (Kindle) and $17.99 (paperback). Miller said people can buy it at Barnes & Noble bookstores and that small bookstores in places such as Buffalo, Rochester and New York City carry it. There are copies available in Richmond Memorial Library in Batavia. “The Prison Guard’s Daughter” is available on Audiobook as well.

Miller said she will have a couple of book talks and signings locally this fall. One will be at 7 p.m. Sept. 30 at the Richmond Memorial Library, 19 Ross St. Another will be at 6 p.m. Oct. 5 at Stevens Memorial Community Library, 146 Main St., Attica.

Books will be available for purchase during both events.