Sign Up
Log In
Purchase a Subscription
You have permission to edit this article.
Edit
Home
News
Sports
Obituaries
Opinion
Arts & Life
Calendar
Photo and Video
Ads
eEdition
More
Share This
1 of 14 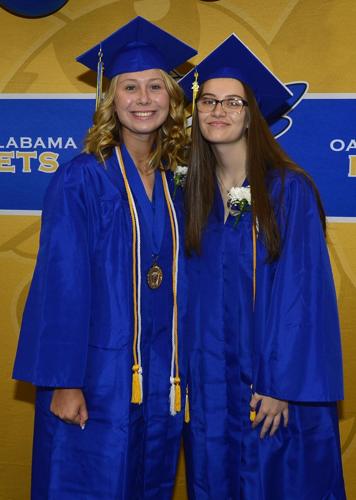 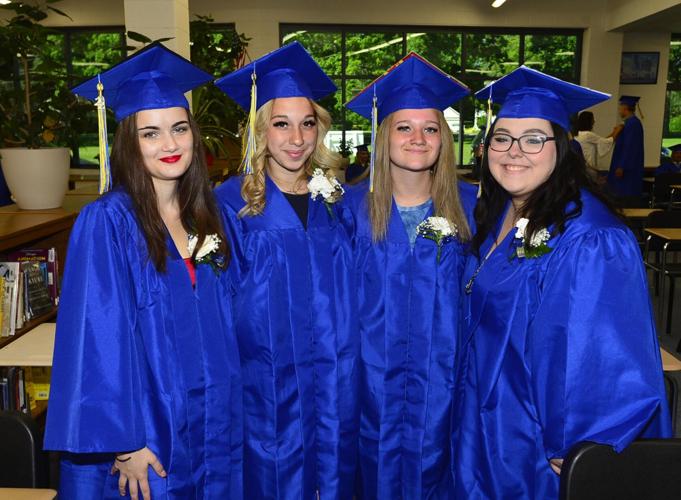 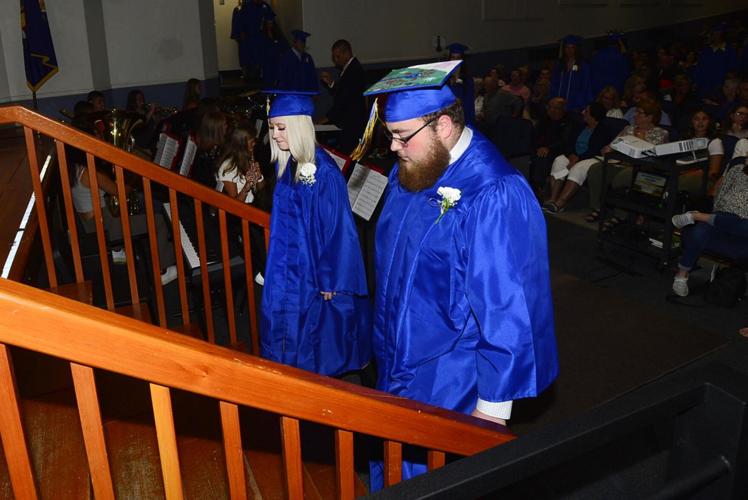 Mark Gutman/Daily NewsMaysieLynn Rapone and Zachary Bradt lead their class up the steps for graduation. 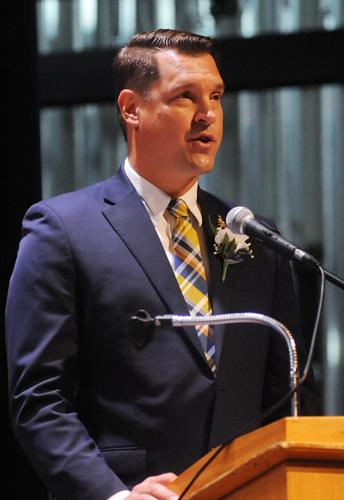 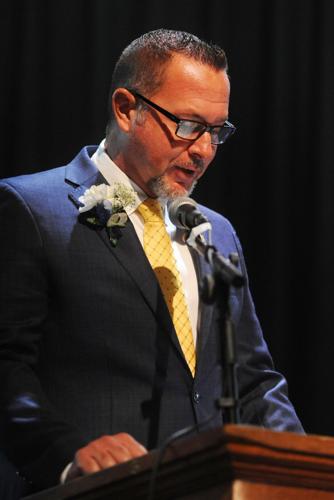 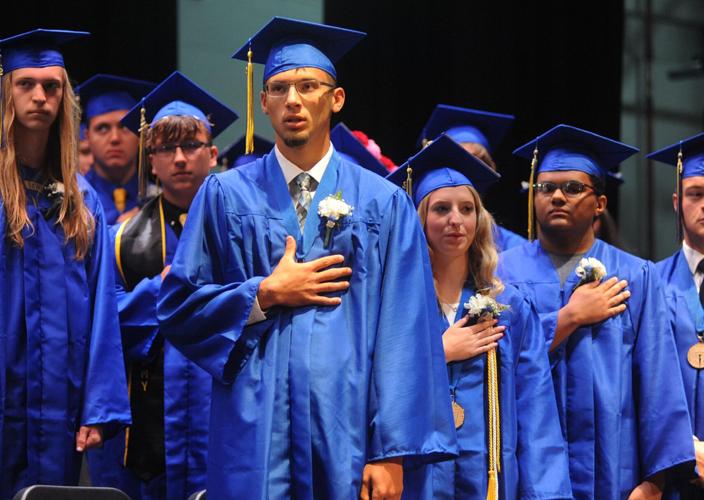 Mark Gutman/Daily News Oakfield-Alabama graduates stand at attention during the Pledge of Allegiance. 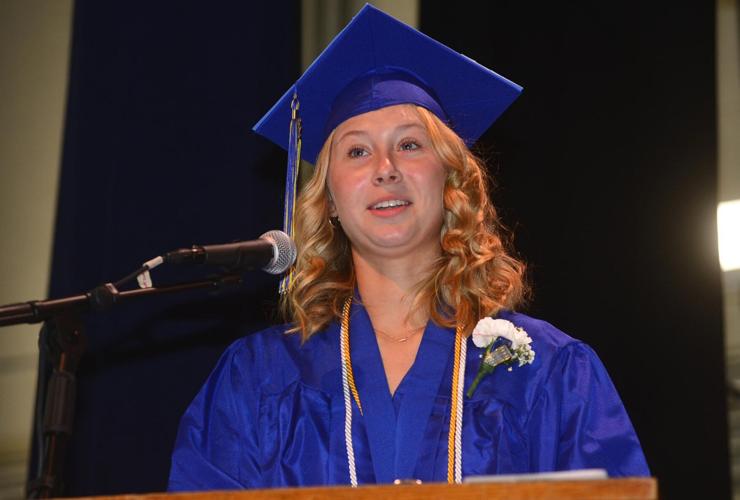 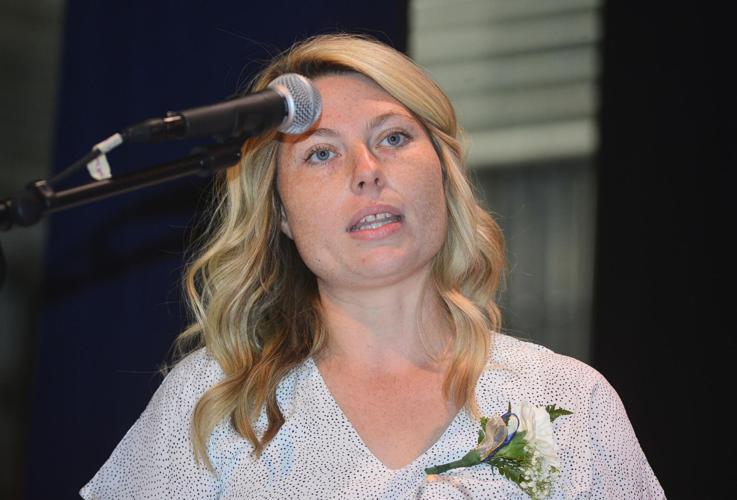 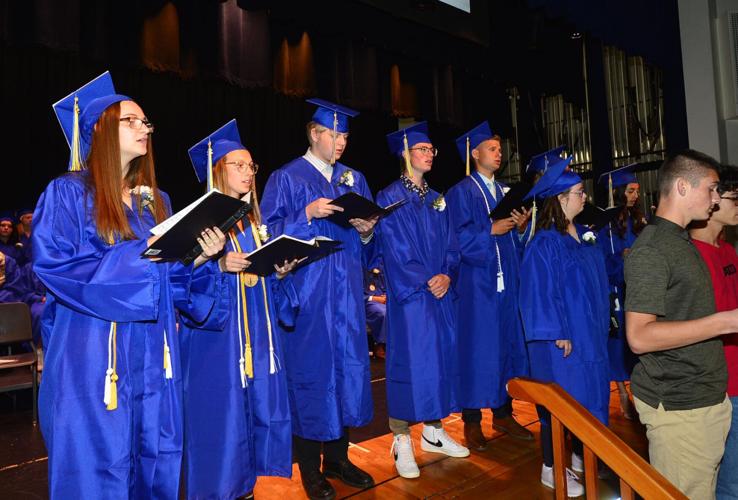 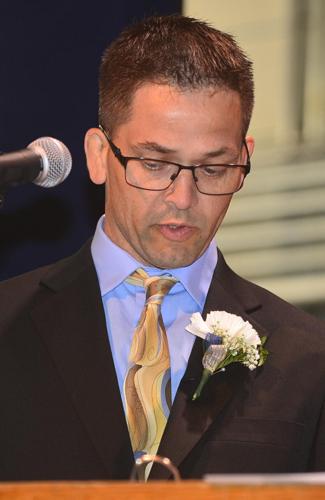 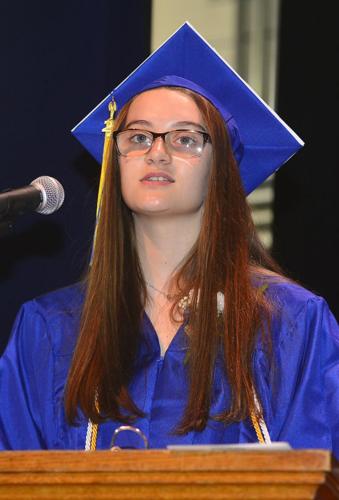 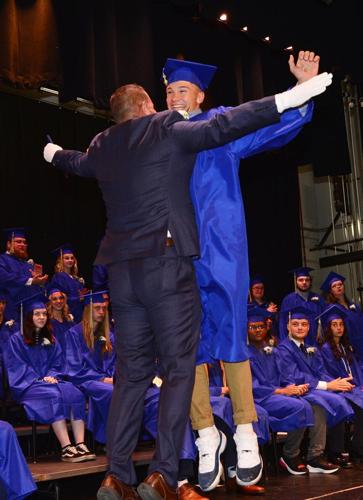 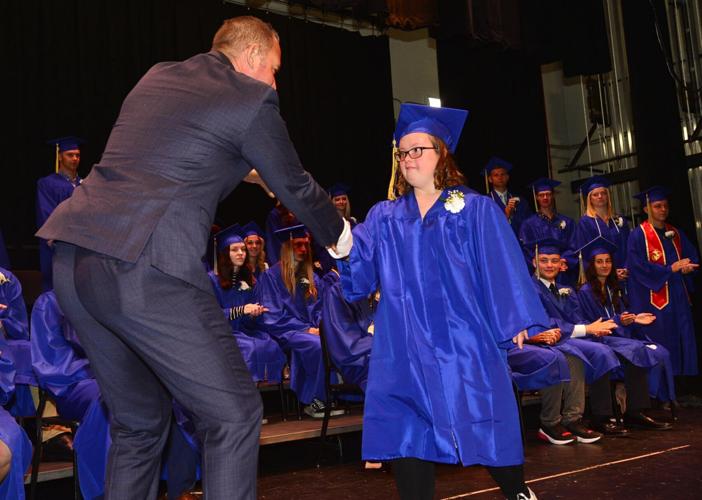 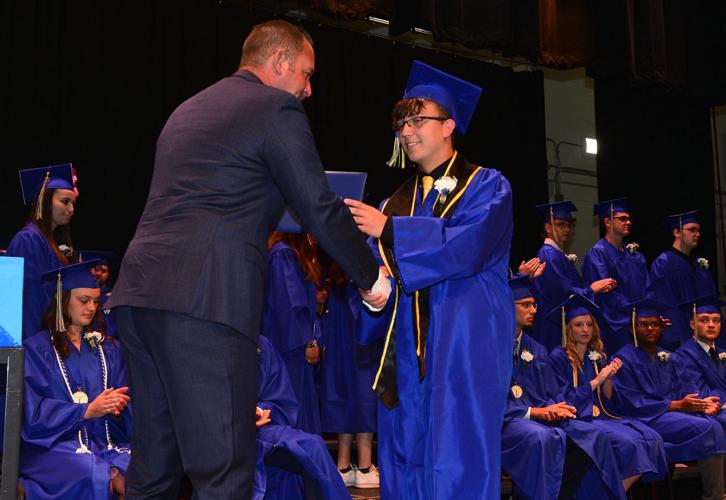 Mark Gutman/Daily NewsMaysieLynn Rapone and Zachary Bradt lead their class up the steps for graduation.

Mark Gutman/Daily News Oakfield-Alabama graduates stand at attention during the Pledge of Allegiance.

OAKFIELD — Oakfield-Alabama Central School District Superintendent John Fisgus had a surprise for the Class of 2022 this morning that he told the seniors they wouldn’t like.

He was not letting them go.

“I’m not approving your graduation today. I’ll see you all back here in September,” he said. “This ceremony’s over. Thank you.”

The students and the audience picked up on the joke, though, and the ceremony didn’t end there. The 52 seniors in the class crossed the stage as planned and received their diplomas.

Joking aside, the superintendent said this class certainly left a name for itself, with eight sectional titles in sports this past school year.

“The concerts and the musical and the awards and scholarships won — absolutely incredible and I loudly applaud all of you as you sit here, because you made it,” Fisgus said. “Wherever you decide to go, be at your best. Whatever you decide to become, be a great one.”

Fisgus asked the graduates to reflect on their accomplishments and gear up for what the real world has in store, because it’s going to hit them hard.

“I just said that to my youngest daughter the other day and she will be graduating from high school, like you, next Saturday morning,” Fisgus said.

The graduates of 2022 have been through a lot, especially when the COVID pandemic struck around March 2020, when they were sophomores.

“You were left to stay home from school and learn remotely,” he said. “The next two years provided uncertainty and a whole lot of craziness, anxiety, and, I know, stress. You are stronger because of it. You are more seasoned because of it. It makes me so proud to know that, while you will be sorely missed here at O-A, I know that each of you will spread your wings and do great things out there.”

Some seniors will leave to join the military, he said. Some will leave the state. Some will head to college and some will start or have started jobs.

“Good luck and Godspeed to all of you,” Fisgus said.

The superintendent told the class a story about four college students who partied late one night and didn’t study for the exam that was scheduled for the next day. The next morning, the four used grease and dirt to make themselves look dirty, then told the dean the tire of their car burst while they were out the night before. They had to push the car back to campus and weren’t ready to take the exam. The dean allowed them to take the retest days later, but put them in separate rooms to take it. There were two questions on the exam. The first, worth one point, asked them to write their name down. The second question, worth 99 points, was “Which tire burst — A: front driver’s; B: front passenger’s; C: back driver’s; D: back passenger’s.”

“So, I ask you, what is the moral of the story?” Fisgus said. “Graduates, always take responsibility for your actions, for you will learn your lesson.”

Salutatorian Kelsey Schlagenhauf said when she was writing her speech, she was wondering whether she should be clever, funny or intelligent, or stick to graduation cliches.

“In reality, most of us have no clue what we’re actually doing with our lives. I believe one thing to be definite. Our time spent at Oakfield-Alabama was a memorable one to say the least. We have had lots of defining experiences that we have gone through as a whole.”

Even though they’ve grown up so fast and remember similar elements of school, it’s the graduates’ differences that set them apart from others, she said.

Schlagenhauf said she was grateful to experience all the adventures she experienced with the group of people sitting behind her.

“As much as I looked forward to this day, I’ve always disliked endings — the end of summer, the finale of an amazing show, saying goodbye to a close friend.

Her parents, Schlagenhauf said, always taught here to appreciate the journey, not just the destination.

“Every one of us has walked a different road to get here. Whether your road was straight, or with lots of twists and turns, we can always look to O-A as the uniting force between us,” she said. “We’ve all had that one teacher, that close friend or coach, who has impacted us and inspired us to show up each and every day and give our best even though we didn’t want to.”

Valedictorian Colbi Heineman said she asked some of her teachers what she was supposed to say when she spoke today. The response she got the most was to say whatever she wanted, which Heineman said was not helpful, as classmates laughed. She admitted finding inspiration from the show “Grey’s Anatomy.”

“Meredith Grey, the main character, once said, ‘Funny, isn’t it, the way memory works — the things you can’t quite remember and the things you can never forget,’” she said. “You probably won’t remember all the mundane day-to-day activities, the grades you earned on assignments or the class schedules you once had memorized. They will all fade away. You will never forget your friends, your first crush, the laughter and the heartbreak. You won’t remember the average days that seemed never-ending, but you will never forget all of the Field days, Homecoming weeks and proms. You probably won’t remember all the math formulas we had to learn, but you’ll never forget wearing masks and Zoom classes.”

Graduation represents an end and an accomplishment, Heineman said, but it also represents a beginning and possibility.

Before the ceremony, Tobolski said she her associate’s degree is in teacher education transfer.

“It sets me up to go into teaching, so teaching classes, planning, psychology, education classes,” she told The Daily News. Tobolski said she’s attending Buffalo State to study speech pathology.

Tobolski and Johnson said when they were in sixth grade, they tested into the program to pursue an associate’s degree.

“We thought it would be a cool opportunity. We got halfway through and we were like, ‘We might as well finish it,’” Tobolski said.

Tobolski said it was worth completing her degree early.

“I don’t have to go back two years after high school for my associate’s degree. I’m already there. It was a little more time in high school that needed to be done and I still got to do sports and everything that I wanted to,” she said.

Johnson said she earned a degree in science, technology, engineering and math (STEM).

“I loved it. It set me up very well, I think, for college. I already know what it’s like to talk to teachers and talk to professors,” she said. “I’ll have all my general education credits out of the way, so that I can go in and do degree-focused classes.”

From here, Johnson said, she’s headed to SUNY Geneseo to study on a pre-med track.