Sign Up
Log In
Purchase a Subscription
You have permission to edit this article.
Edit
Home
News
Sports
Obituaries
Opinion
Arts & Life
Calendar
Photo and Video
Ads
eEdition
More
Share This
1 of 9 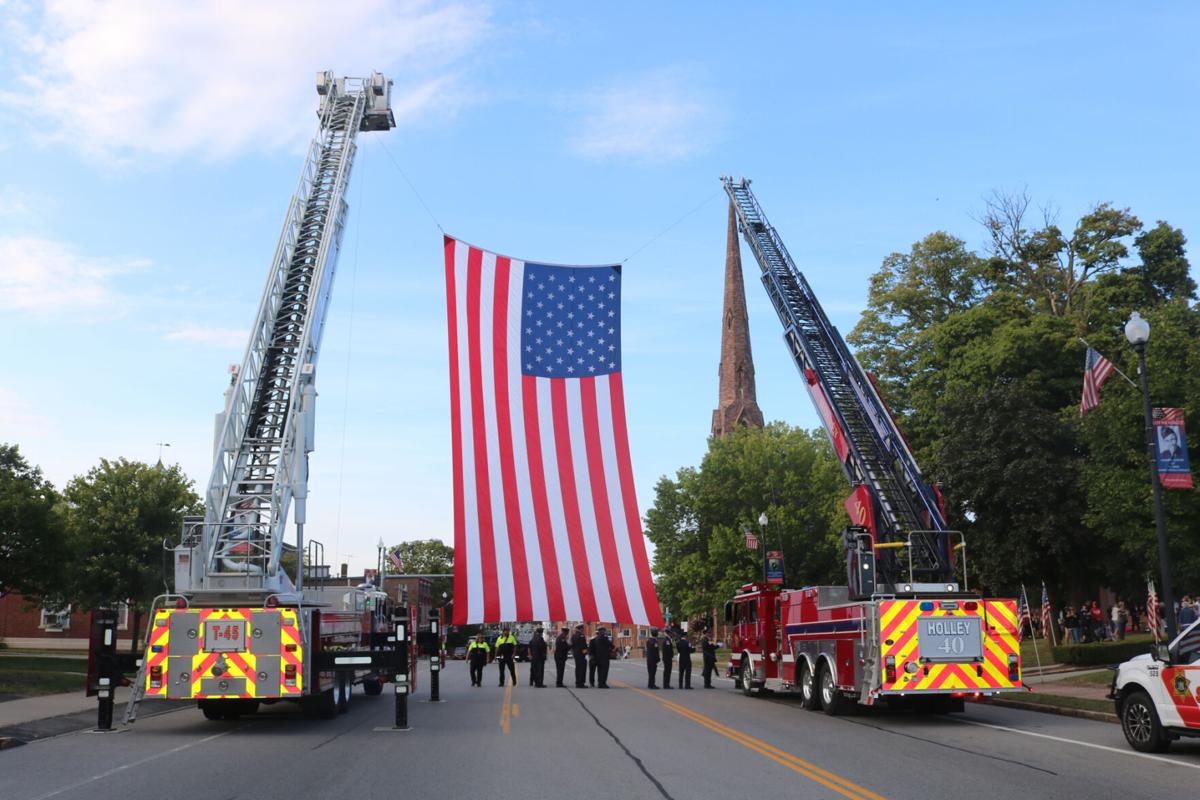 BRIAN QUINN/DAILY NEWSAn Albion fire truck on the left and Holley truck on the right hold up the flag in Albion for Saturday evening’s Orleans County Day of Remembrance ceremony. 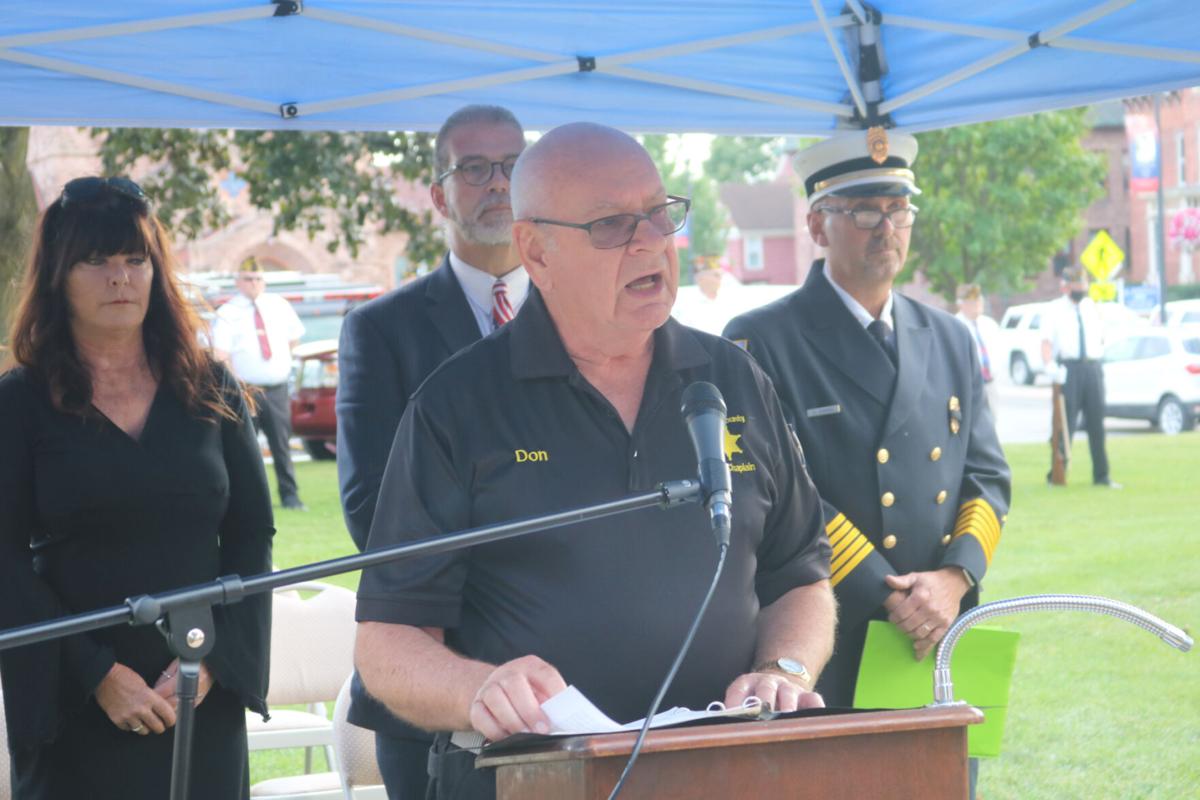 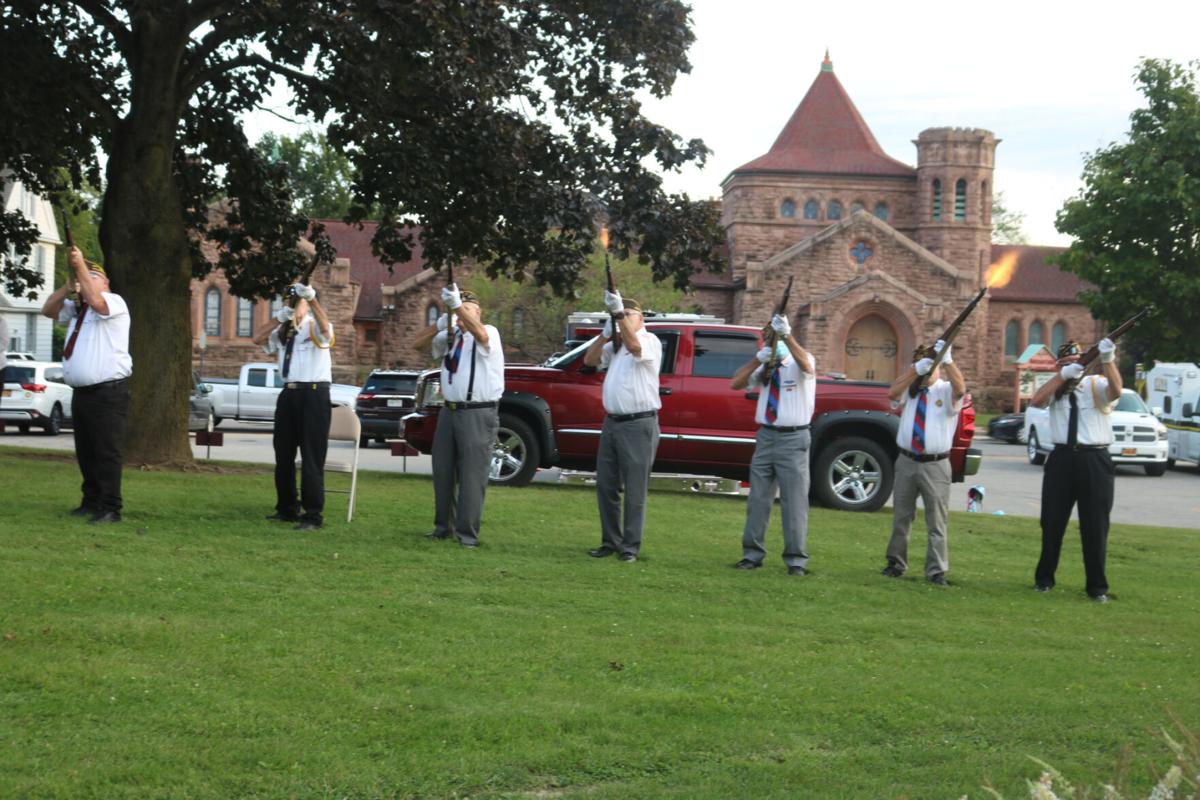 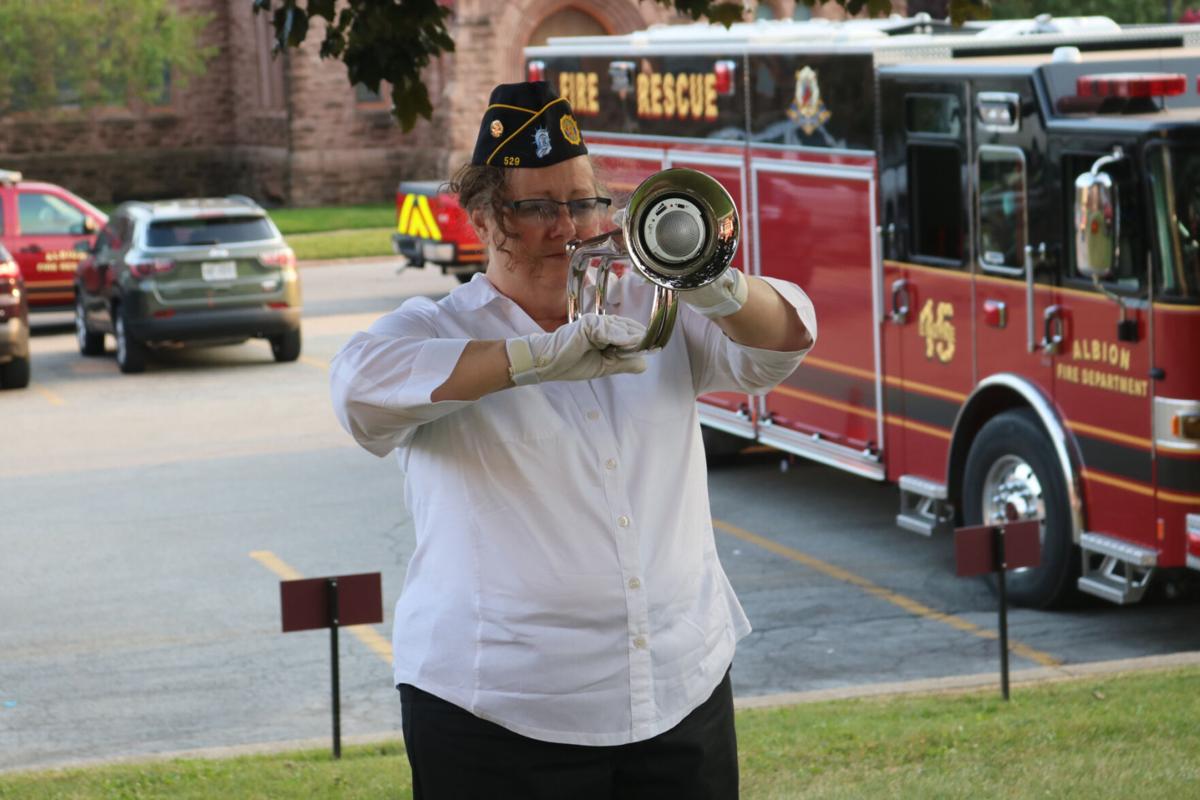 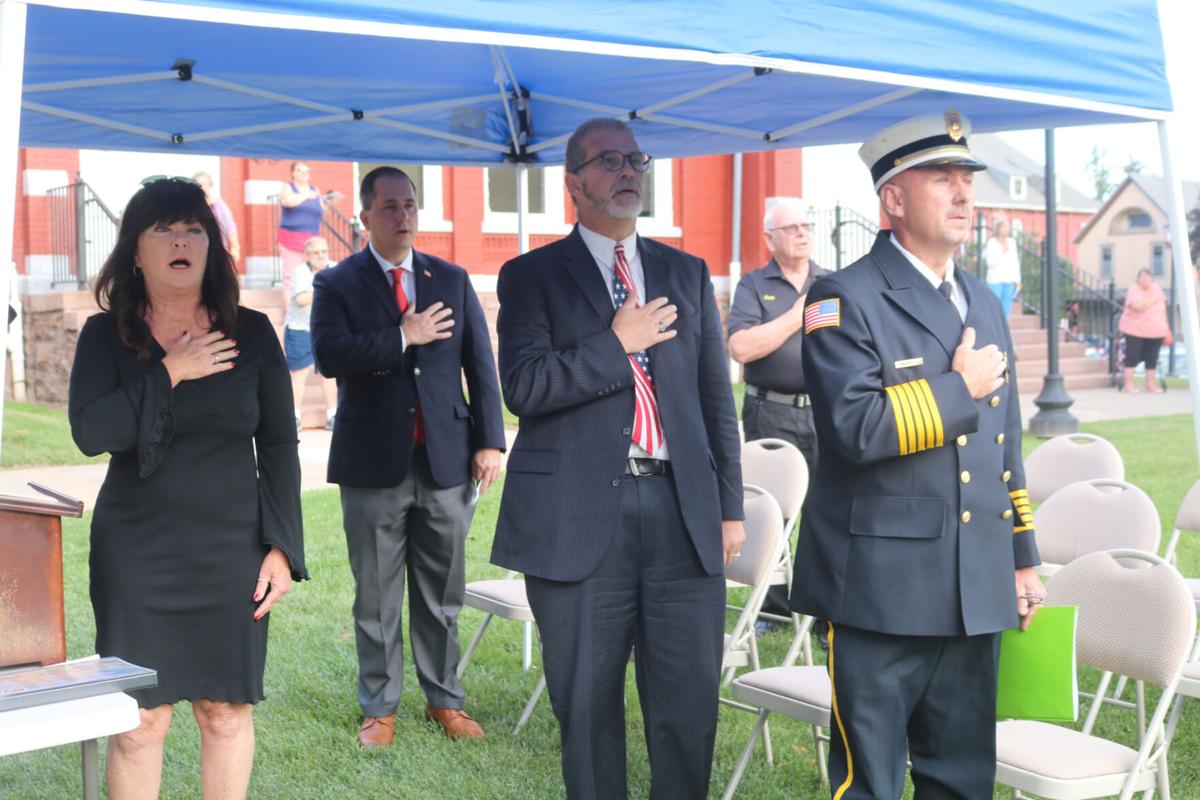 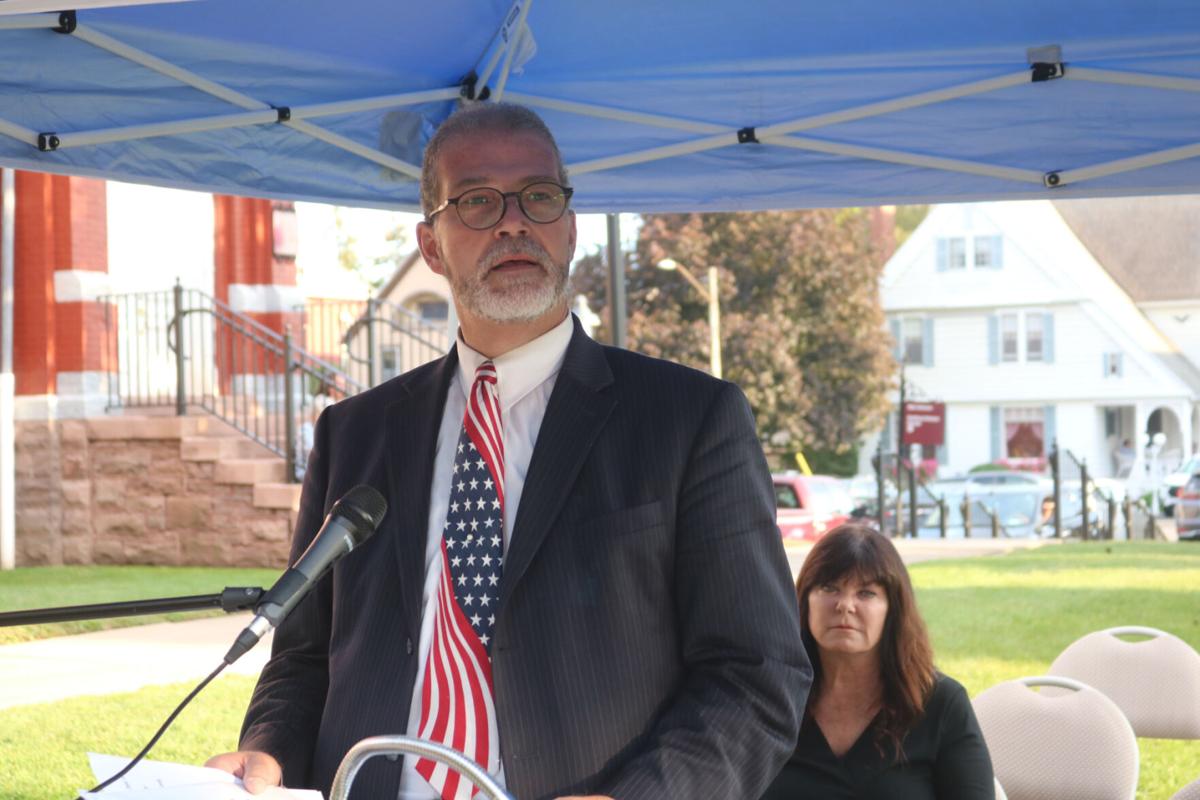 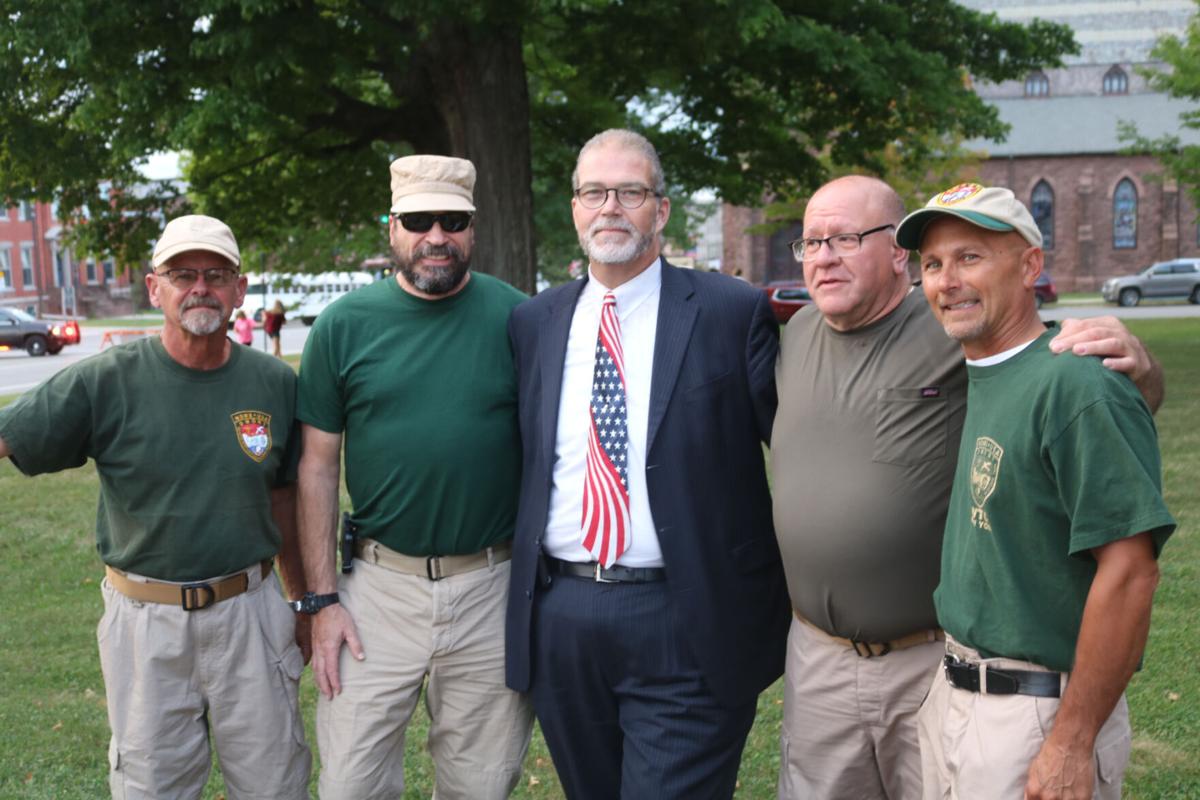 BRIAN QUINN/DAILY NEWSScott Schmidt, middle, who served for about three weeks at Ground Zero with the Disaster Mortuary Operational Response Team (DMORT) in the afternath of 9/11, gathered for a group photo with DMORT members, from left, Arthur Lucas, Robert Zerby, Vincent Iocovozzi and David Brugno. 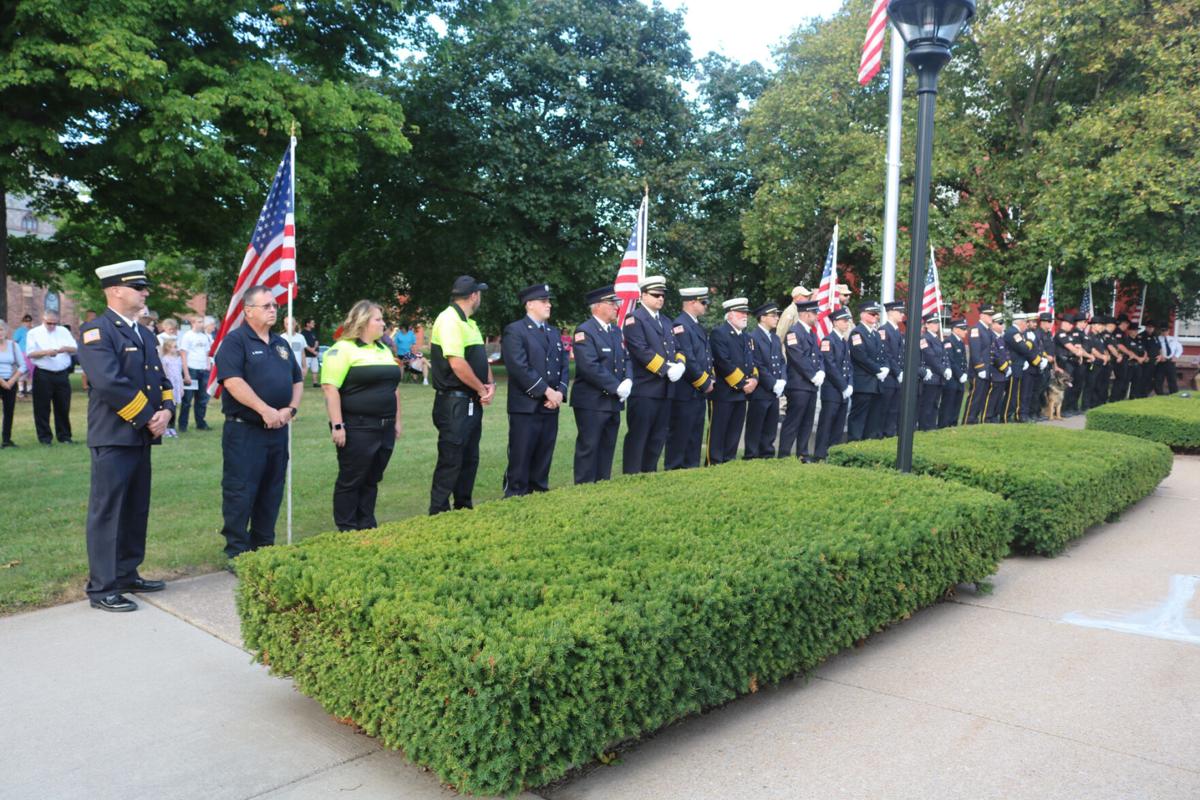 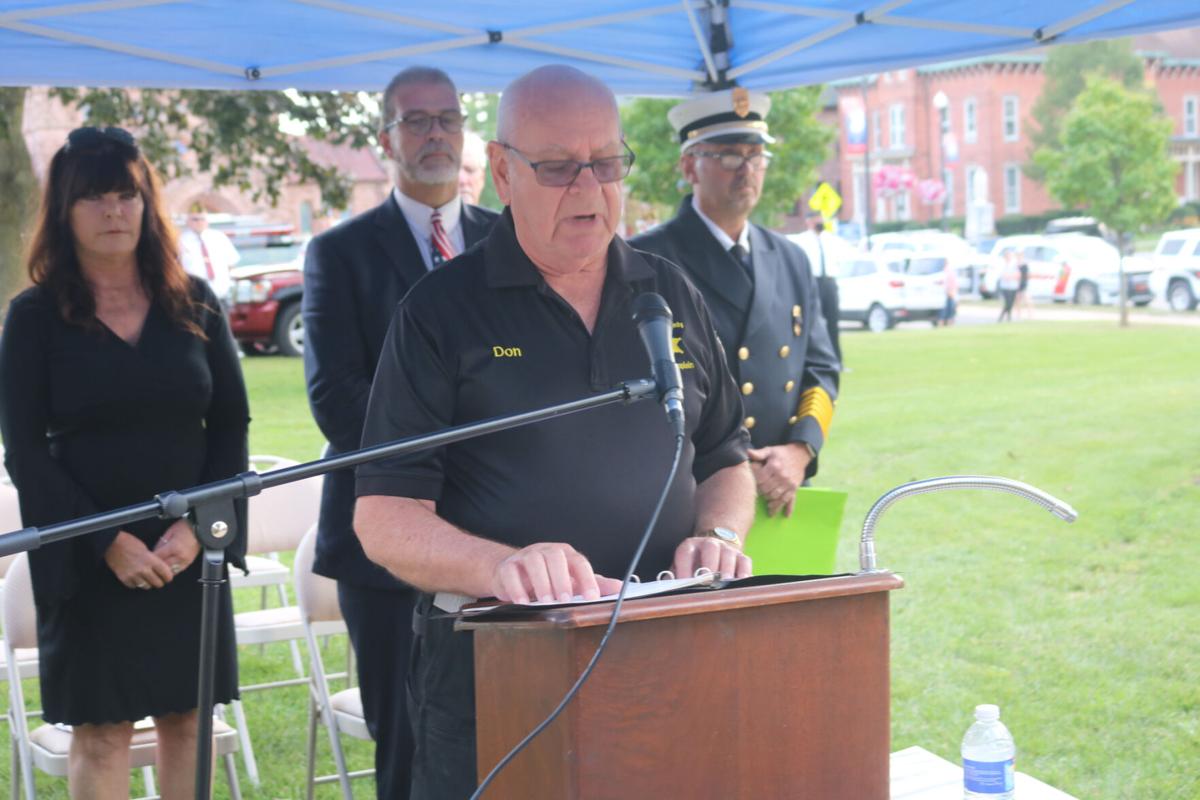 BRIAN QUINN/DAILY NEWSAn Albion fire truck on the left and Holley truck on the right hold up the flag in Albion for Saturday evening’s Orleans County Day of Remembrance ceremony.

BRIAN QUINN/DAILY NEWSScott Schmidt, middle, who served for about three weeks at Ground Zero with the Disaster Mortuary Operational Response Team (DMORT) in the afternath of 9/11, gathered for a group photo with DMORT members, from left, Arthur Lucas, Robert Zerby, Vincent Iocovozzi and David Brugno.

ALBION — There are things that happened 20 years ago that people in Orleans County still remember and choose not to take for granted, county Chief Coroner Scott Schmidt says.

Schmidt and other local officials spoke Saturday evening to commemorate the 20th anniversary of 9/11, the day terrorists hijacked four planes and crashed them into the World Trade Center towers and the Pentagon, while the fourth plane, headed for Washington D.C., crashed near Shanksville, Pa., after passengers overpowered the hijackers.

“Today, around the nation, the names of over 3,000 men, women and children killed as a result of the terrorist events of Sept. 11, 2001, will be read ... We stand in solidarity with their families and loved ones as we honor the life of every victim and fulfill our sacred promise to remember always,” he said. “We place ourselves now in a place where the busy world is hushed and absorb what peace there can be in silence. We remember a day when terror struck, bravery was defined, and a country was united. Prior to this day 20 years ago, we took too many things for granted without realizing that, in an instant ... that very thing can disappear.

Schmidt thanked the community for choosing to attend Saturday’s remembrance in front of the Orleans County Courthouse. Schmidt is a special employee of the U.S. Department of Health and Human Services National Disaster Medical System, serving on the federal Mortuary Team (DMORT). He spent three weeks in New York City helping to identify victims of the attacks on the World Trade Center.

Schmitt told those gathered that they choose not to take for granted the over 3,000 lives lost 20 years ago because of the reaction of fear to our freedom.

“You chose not to take for granted the men and women in the fire service, EMS, and law enforcement who, while huddled in Command circles as the base of the Towers, looked at the smoke and flames and made a personal decision to go up into danger to save the lives of others while knowing they most likely would lose theirs; who made choices to run into a blinding sea of dust to search and rescue the injured and maimed,” he said. “You chose not to take for granted the terrifying images, but more importantly, the horrific sounds of people making the agonizing choice whether to have their lives come to an end, ravaged by fire and smoke or leap to their death, hitting carports, awnings, other individuals and the ground with a pronounced and dreadful thud.”

They also chose not to take for granted the heroes on the aircraft over Pennsylvania who decided they were not going down without a fight and, by overtaking the cockpit and terrorists on board, caused the plane to crash, saving hundreds, if not thousands, more lives at the Capitol.

“You chose not to take for granted the men and women in uniform…past and present…who have fought for and continue to fight for our lives and freedoms…by risking theirs on a daily basis. Some of them, too, lost their lives at the Pentagon that day when they were just doing their job protecting us with special assignments and duties,” Schmidt said. “And you chose today not to take for granted the citizens of the United States and the people who were going about their daily lives just working for a living ... who lost their lives because they were in the wrong place at the wrong time.”

The community hasn’t forgotten the paid and volunteer rescue workers who worked valiantly around the clock searching the rubble and debris for victims, survivors and for bodies or body parts.

“You chose not to take for granted, the images of the flames which burned for days, the plumes of billowing smoke rising from the pile which were never ending…even after the flames were extinguished. You chose today to not take for granted the countless volunteers on the homefront, who came together in unity to support our nation and each other in our greatest time of need,” he said.

Many people in the world are taking for granted our safety as a nation, as a world power and as free citizens, Schmidt said.

”The events of the past two weeks in Afghanistan have resulted in American citizens being held hostage behind enemy lines. The very same enemy which attacked OUR homeland 20 years ago. That very enemy, because of poor proper planning on many levels, now has many of OUR tools of war and defense — such as aircraft, vehicles, weaponry, ammunition and advanced technology — to use at their will…AGAINST US!” he said. “The safety of our Homeland, which we took for granted 20 years ago, is now again in jeopardy at a greater level…and this time, we know it…and it is in great part because of our political leadership ...”

COUNTY LEGISLATURE CHAIRWOMAN Lynne Johnson recalled that on the evening of Sept. 11, 2001, President George W. Bush spoke to the American people, saying, “A great people have been moved to defend a great nation. Terrorist attacks can shake the foundations of our biggest buildings, but they cannot touch the foundation of America. Those acts shattered steel, but they cannot dent the steel of American resolve.”

Johnson said the community gathered Saturday enjoying the freedom secured for it “by the brave men and women who have fought for, and died for, our rights as God-fearing human beings,” but added that there are others who are steadfast in taking away those rights.

“They are not just the terrorists in foreign countries. They are living here amongst us, secretly infiltrating our government and dismantling our Constitution,” she said. “Like those in 1941 and those on 9/11/2001, they are evil beyond any conceivable definition.”

Johnson asked people to pray for those who continue to grieve over lost loved ones and whose sense of safety has been threatened by these and other acts of cowardice.

“My message to you, as we leave here today, is to be ever mindful of the realities that surround us,” she said. “Pearl Harbor was a wakeup call 80 years ago. Sixty years later, it was here on our mainland, only 20 years ago. We must be vigilant and maintain our RESOLVE no matter how distant a threat might appear, and ask God to bless and protect our great nation from the forces of evil which surround it.”

OFFICE OF EMERGENCY MANAGEMENT DIRECTOR Dale Banker said in helping to organize this year’s event, he wanted to emphasize the word “remembrance.”

“Not only do we remember the nearly 3,000 people who lost their lives that day, but we remember the countless Americans who gave of themselves to help the injured, the dying, the lost,” he said. “Our fire personnel, along with law enforcement, EMS and Port Authority workers are undoubtedly our heroes for the sacrifices they endured that day in Virginia, in Pennsylvania and in New York City. On that day, we ALL became first responders in one way or another.”