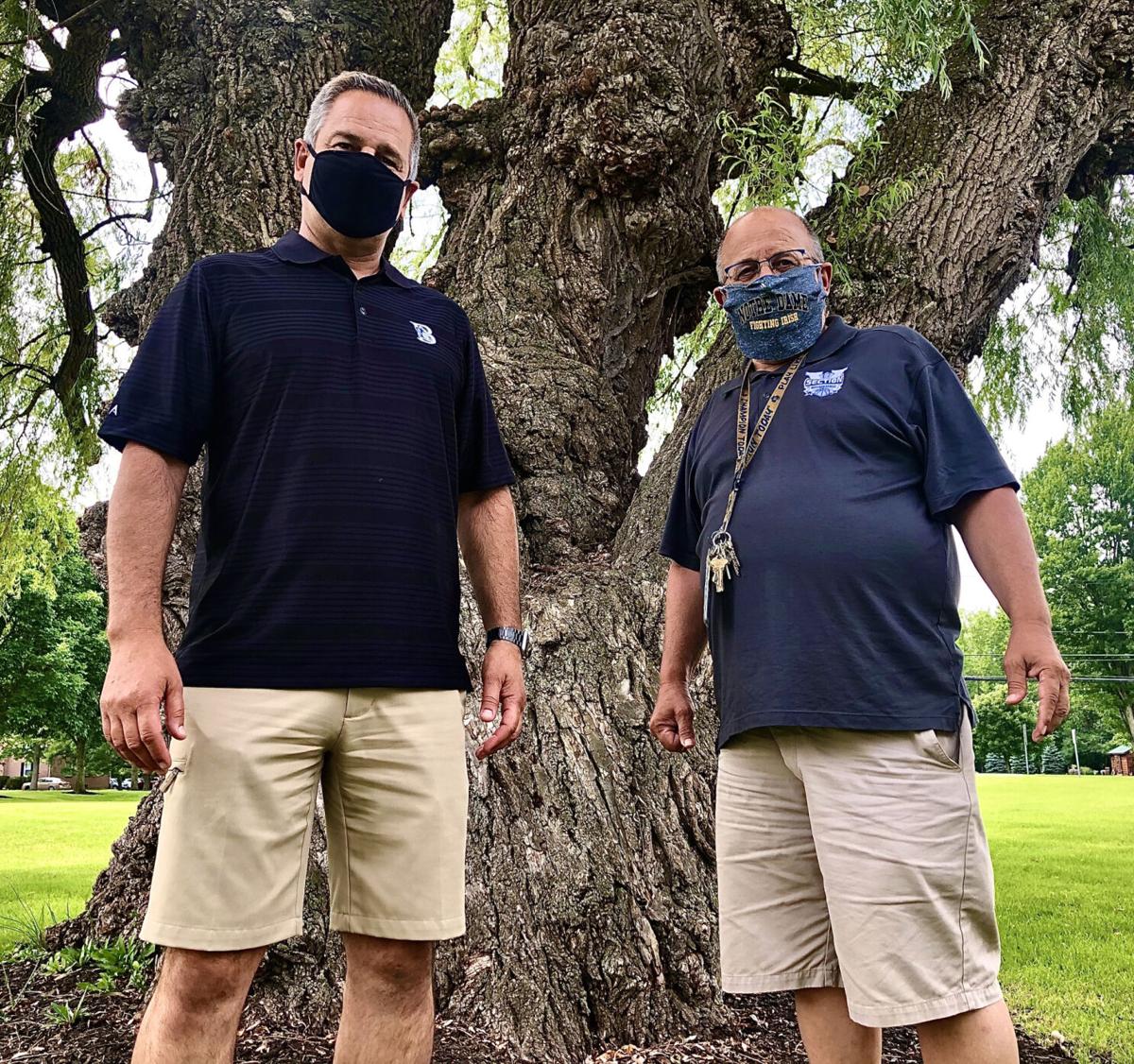 Alex Brasky/Batavia Daily NewsBatavia athletic director Mike Bromley and Notre Dame AD Mike Rapone are concerned with the current state of athletics in New York as a result of contradicting guidance provided by the governor’s office. 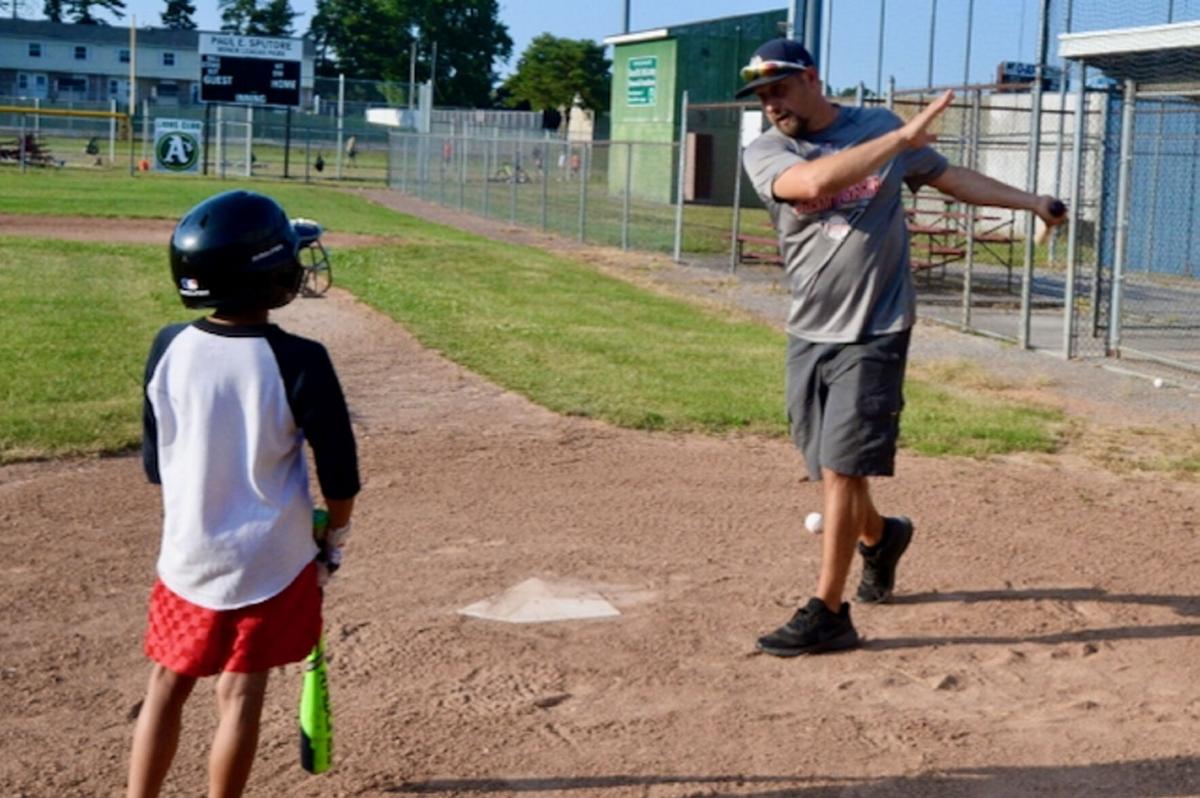 Alex Brasky/Batavia Daily NewsBatavia Minor League was one of the local organizations to begin practice the week of July 6. Here, league president provides a bit of instruction while maintaining social distance. 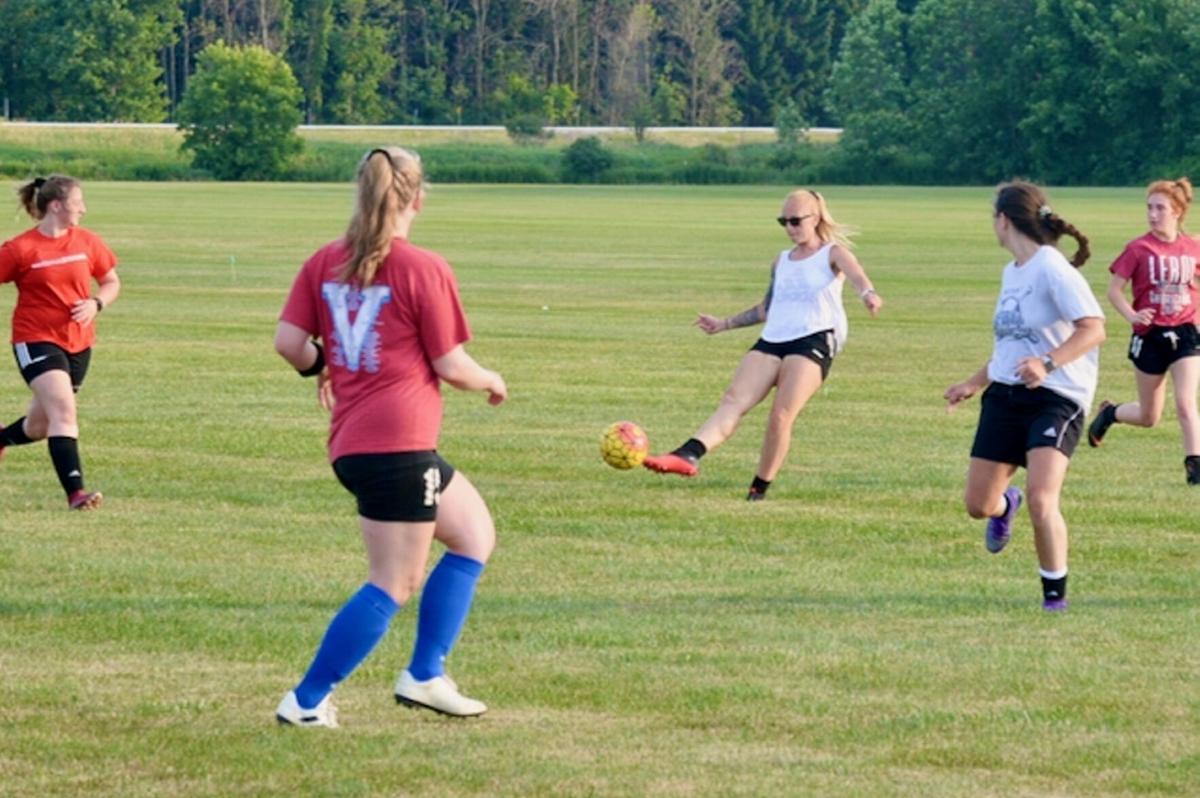 Alex Brasky/Batavia Daily NewsYouth sports and recreational adult sports were able to resume practices and games beginning the week of July 6, but high schools were not allowed to resume.

Alex Brasky/Batavia Daily NewsBatavia athletic director Mike Bromley and Notre Dame AD Mike Rapone are concerned with the current state of athletics in New York as a result of contradicting guidance provided by the governor’s office.

Alex Brasky/Batavia Daily NewsBatavia Minor League was one of the local organizations to begin practice the week of July 6. Here, league president provides a bit of instruction while maintaining social distance.

Alex Brasky/Batavia Daily NewsYouth sports and recreational adult sports were able to resume practices and games beginning the week of July 6, but high schools were not allowed to resume.

BATAVIA — When Gov. Andrew Cuomo announced on June 25 that interscholastic sports in New York State were not permitted to move forward with initial phases of reintroduction, local athletic directors were stunned.

In vigorous preparation over the course of many months, ADs were leaving no stone unturned as they readied their coaches and athletes to begin training on their projected start date, July 13. Equipped with strategies that would ensure health and safety protocols were followed, Batavia athletic director Mike Bromley says that before the surprising announcement in late June, his programs were excited to get started.

“We were ready,” said Bromley.

That’s why Gov. Cuomo’s announcement, and the lack of guidance that followed was so perplexing to Bromley, along with Notre Dame athletic director and head boys basketball coach Mike Rapone.

“It’s like all of these people who were enlisted to come up with the guidelines did so while all in separate rooms,” said Rapone. “Every day we are told something different, and everywhere you look one bit of information contradicts the next.”

One of the major contradictions that have Rapone, Bromley and other local athletic directors scratching their heads is the fact that while their schools’ programs have been forced to put things on hold, youth sports are off and running all over the state. Not only are Bromley and Rapone aggravated with the seemingly contradictory guidance provided by the governor’s office, but so are parents of local athletes.

Bromley helps lead the Batavia Reopening Committee’s Health, Safety and Athletics task force, and he says that following a recent meeting he was approached by other members, who also happen to be parents of local high school athletes.

“They have been seeing the things going on in some youth sports organizations and they’re concerned,” said Bromley.

The Batavia AD says that many youth sports organizations are following the guidelines provided to them and are doing a great job enforcing health and safety practices that will effectively slow the spread of COVID-19.

However, he says that there are also a great number of examples of organizations that are not heeding the advice of experts and are allowing their athletes and coaches to run rampant without concern for the health and safety protocols with which they’ve been provided.

Bromley and Rapone used travel baseball and softball teams attending out of state tournaments over the past few weeks as an example. In many cases, they say that these teams are carpooling together, dining together and sharing hotel rooms all while failing to adhere to social distancing guidelines, etc. Once at the field, many of these teams aren’t wearing masks when necessary, are huddled in dugouts and continuing to practice in large groups.

“These parents have seen it. It’s like the ‘Wild West’,” said Bromley. “In some situations you have great organizations doing their part, and in others you have no measures being taken. There is no accountability.”

Bromley went on to explain how it’s not an adversarial relationship between he, fellow ADs and youth sports coaches, as he acknowledged that many programs do plenty of good and even help serve as feeder systems for school athletic programs.

“I don’t want these coaches to think that we don’t appreciate what they do,” added Bromley. “We are just afraid that things aren’t being done responsibly in every situation.”

To Bromley and Rapone, the fact that youth sports have been allowed to go forward and high schools have been put on hold is perplexing.

“(High schools) are better equipped than youth sports organizations to put protocols in place and enforce them,” said Rapone, who went on to explain the measures that he, Bromley and other ADs have been taking in order to ensure that their schools are prepared when and if they’re given the green light.

Under the instruction of the New York State Public High School Athletic Association, schools are relying upon the guidance provided by the National Federation of State High School Associations, which includes a three-phase plan which is supported by the NYSPHSAA COVID-19 Task Force.

The primary point of emphasis of the NFHS plan is to actively decrease potential exposure to respiratory droplets from other individuals, an end which was to be reached by various strategies introduced by NFHS. Those strategies included the obvious such as facial coverings, social distancing protocols, guidelines in response to an athlete or coach testing positive, etc. However, where NFHS went a step further was to require all administrators and coaches to take a COVID-19 elective course which is currently available within the NFHS online learning center.

Within the course, coaches and administrators are provided general information pertaining to limiting the spread of the virus, while also being given activity guidelines, cleaning and equipment considerations, along with other in-depth instruction.

In addition, accountability starts at the top in high school athletic associations, beginning with local athletic directors and running all the way up the ladder to sectional coordinators and the state committee.

For youth sports, their guidance has been provided by a separate entity, the New York State Department of Health, whose guidelines slightly differ from those handed down by the NFHS and provide little sense of being held accountable. Within the guidelines provided by the NYSDH, youth sports organizations are left to hold themselves accountable, rather than answer to a universal administration which oversees the daily operations of its leagues and organizations.

The literature provided by the NYSDH reads as follows:

In the minds of Bromley, Rapone, and other NYSPHSAA officials that is simply leaving too much up to chance.

“I thought the plan we had put together was well thought out,” said Executive Director of the NYSPHSAA, Dr. Robert Zayas on June 27. “It was backed by our national governing body. It provided a number of safety measures for schools, athletes and coaches to abide by, but unfortunately we’re going to have to wait before we can implement it.”

That seems to be the problem for Zayas and athletic directors around the state, as they believed they were as prepared, if not better prepared than local youth sports organizations and yet they are being left out in the cold. Making matters more difficult has been the lack of guidance provided by state government.

“Right now, I don’t know what guidance is going to come out or how athletics might be impacted,” added Zayas in late June.

In the end, it’s vital that kids return to school and return to playing high school sports, say Bromley and Rapone.

One of their primary concerns is at-risk children that value school as an outlet for enrichment, nutrition and exercise. With every child not having the benefit of a positive home life, school life presents those at-risk kids with opportunities that they would not normally be afforded.

Another important question to consider, say Bromley and Rapone, is that if schools do reopen, will sports automatically come with it? They believe athletics are a vital element to the high school experience.

“Schools have athletics for a reason,” said Rapone. “For many kids, class attendance increases in season.”

Bromley and Rapone also say that they are fearful of losing kids to club programs which have been able to restart competition for the past month while their own programs remain in limbo.

“The longer this goes on, the more danger we are in of losing kids from our programs,” said Bromley, who pointed to soccer being a prime example, while Rapone followed that up with hockey as an example. “They can use it as a selling point - ‘You don’t need high school sports - they aren’t even allowed to play yet. Just play here.’”

The message from Bromley and Rapone is simple; while it has been nice to see youth sports off and running once again, we must continue to be conscious of how we enjoy these sports in order to ensure we don’t jeopardize things in the future.

“We just want all of these youth organizations to do their job now so these kids will have a chance to play high school sports in the fall,” said the Notre Dame AD. “Our biggest fear is that failure to follow guidelines now will lead to a spike (in cases) which will cause schools (and interscholastic sports) to be closed indefinitely this fall.”

Athletic directors, coaches and players everywhere are holding out hope and continuing to do what they can in order to ensure high school sports will return, in some form or fashion sooner rather than later. This is their plea to others, hoping that they, too will do their part.