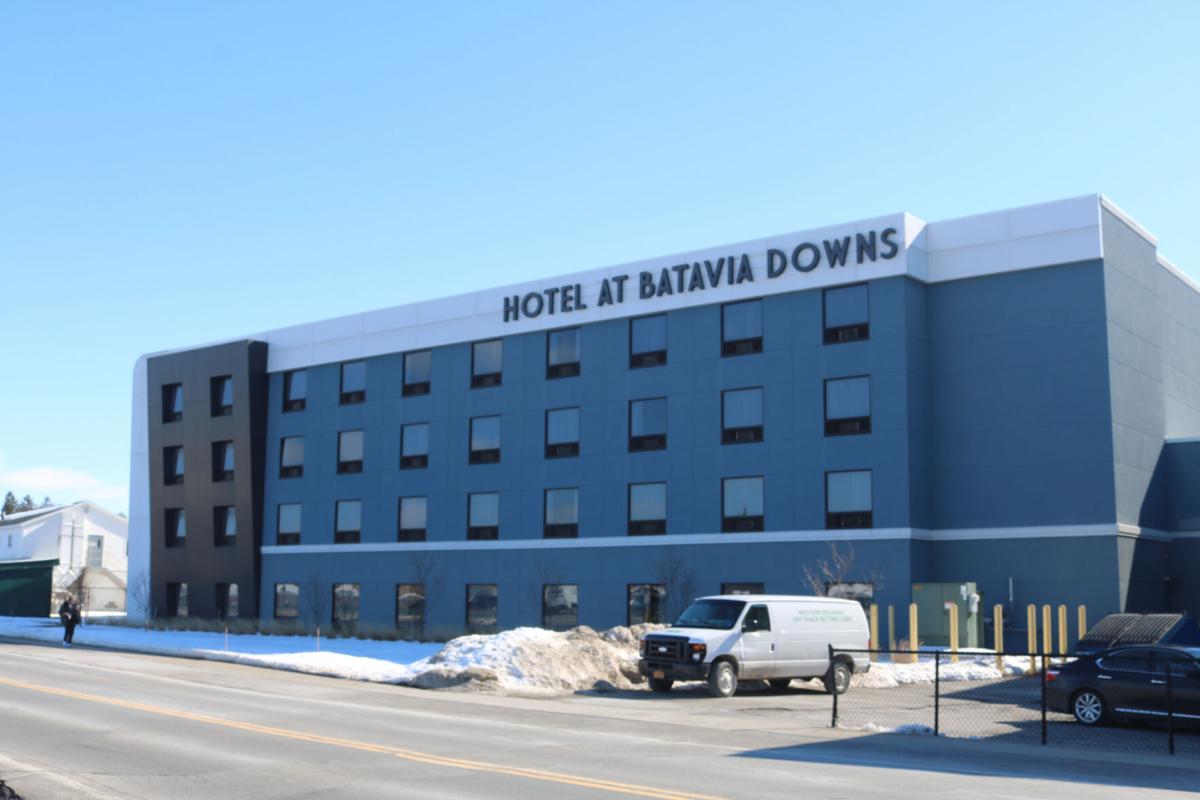 BRIAN QUINN/DAILY NEWSThe Hotel at Batavia Downs will come under ownership of the Western Regional Off-Track Betting Corporation if the sale for up to $8 million is finalized. 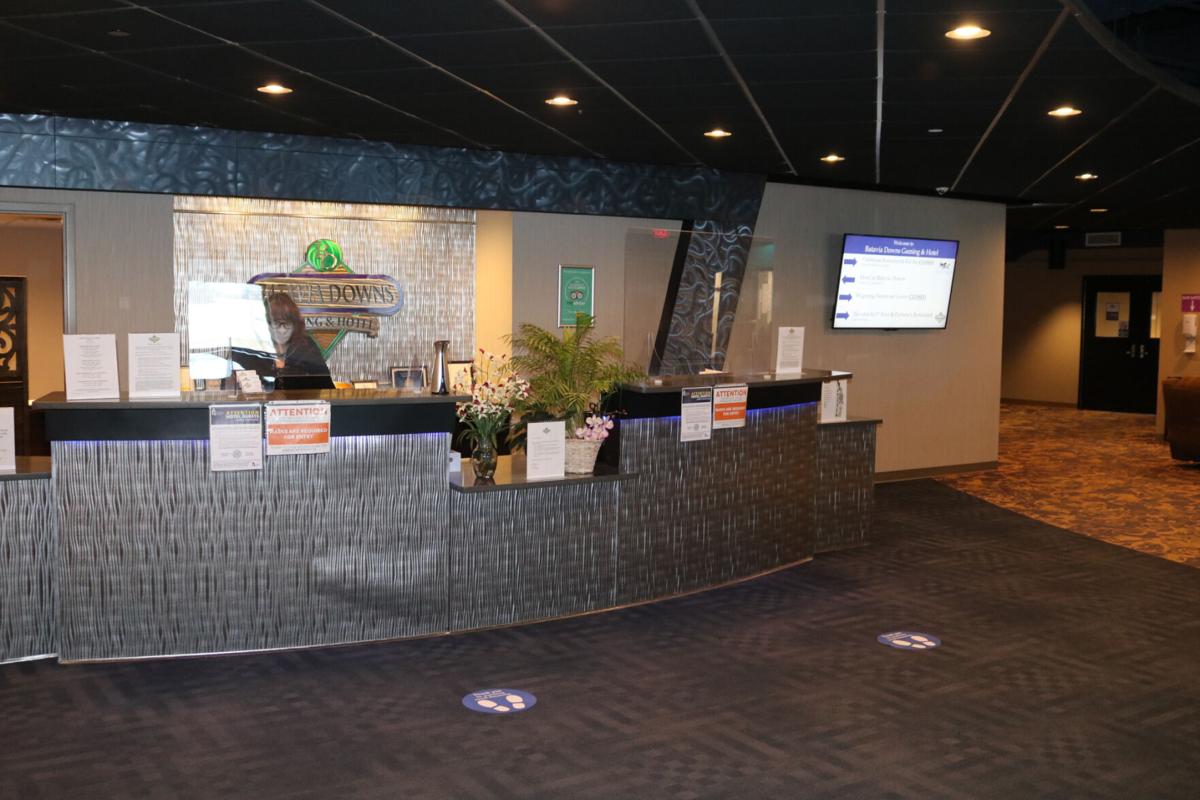 BRIAN QUINN/DAILY NEWSOwning the hotel, the lobby of which is shown here, is a great expansion opportunity for Western Regional Off-Track Betting Corporation, President and CEO Henry Wojtaszek said Thursday.

BRIAN QUINN/DAILY NEWSThe Hotel at Batavia Downs will come under ownership of the Western Regional Off-Track Betting Corporation if the sale for up to $8 million is finalized.

BRIAN QUINN/DAILY NEWSOwning the hotel, the lobby of which is shown here, is a great expansion opportunity for Western Regional Off-Track Betting Corporation, President and CEO Henry Wojtaszek said Thursday.

BATAVIA — The purchase of the Hotel at Batavia Downs for up to $8 million has the blessing of the Western Regional Off-Track Betting Corporation Board of Directors, which on Thursday approved the WROTB’s purchase of the property from a Buffalo firm.

WROTB plans to finance the purchase through tax-exempt bonds. The purchase was approved at the board’s regular meeting, with only board member Paul Lattimore Jr. voting against it.

Board member Richard Siebert said his understanding the financing for the purchase would be over 20 years.

“We’re a tax-exempt organization. We’ve already done our due diligence on that,” she said. “We have been working (with) and currently are working with two banking institutions — Key Bank and Bank of Castile right now. It looks very encouraging. Interest rates are, historically, at all-time lows right now, so you have to take advantage of that.”

The hotel is owned by ADK Hospitality LLC and is operated by Hart Hotels Management.

“We think it’s a good opportunity to expand our operation here. We think we can utilize it to provide a great level of customer service and enhance our relationship with our guests and our patrons,” WROTB President and CEO Henry Wojtaszek said after the meeting. WROTB hopes to close on the purchase between April 1 and May 1, he said.

“We have reached an agreement in principle and we needed to bring those details to our board to have them approve it before we sign the contract, which I’m hoping we can do by the end of next week,” he said. “Any type of event that we have here is enhanced by the ability to stay in the hotel and marketed by us and packages put together when it’s all owned by the same company. We believe there’s a big advantage to that.”

Hart has operated the hotel since its opening in 2016.

“We believe that the current company that’s operating the hotel, Hart Hotels, does a very, very good job. We’re interested in retaining them to operate the hotel,” Wojtaszek said. “We have to sit down and discuss a contract with them and see if we can arrive at mutual terms.”

Also Thursday, the board approved the sale of OTB property at 969 McKinley Parkway in Buffalo for $900,000 to Alaskan Properties I LLC.

For the planned 2021 Summer Concert Series at Batavia Downs, the WROTB board approved spending a maximum of $274,000 to bring in nationally-known performers, though it doesn’t have agreements in place with all performers right now. In a separate resolution the board agreed to spend $139,460 to buy a stage and truss, crowd-control barricades and storage container for the concert series from Audio Images Sound & Lighting. WROTB used to lease the stage and other equipment and says buying them would be a savings.

The first concert of the series is scheduled for June 25 and the performers WROTB has agreements with so far are Steve Augeri, former Journey lead singer, and Don Felder of The Eagles, said Batavia Downs Director of Marketing Ryan Hasenauer. He said he believes Steve Augeri is scheduled to perform that day.

“We obviously purchased the stage today and if the opportunity comes up to have a smaller concert before then and we get regulations from New York state and we’re able to pull it off safely, certainly we’ll explore that option as well,” Hasenauer said after the meeting.

Regarding ticket prices, he said, “We have to wait and see what the regulations are from New York state to figure out how we’re going to be able to configure the outside. Obviously, a reduced number of seats available might increase the cost per ticket. We have to wait and see how many people we can fit out there while adhering to all the social distancing policies. Once we get the capacity total, we can go from there and figure out what the price will be for the tickets.”

Wojtaszek said Batavia Downs hopes to announce a full concert schedule in the next couple of weeks.